The EPOS Sennheiser GSP 601 is a wired gaming headset that sets a new standard for how stunning a set of headphones made for gaming can look. The premium materials and satisfying cushioning make for hours of comfortable usage. However, a high price and lack of features makes these a no-go for the budget-conscious, pro gamers and audiophiles.

Sennheiser has a name for making stellar gaming headsets, but with the EPOS Sennheiser GSP 601, the newly formed EPOS brand has launched one of its first co-branded gadget.

With the Sennheiser 670 and Sennheiser 370 gaming headset, the brand knocked it out of the park in the gaming headset market. However, both were pretty dull to look at, which is an absolute no no for those who care about having a stylish gaming setup.

EPOS Sennheiser GSP 601, and its GSP 600 and 602 colour variants, are far more bold. The gaming headsets wouldn’t look out of place on a catwalk, let alone simply resting on your head during an all-night gaming sesh. But are they well-rounded enough to justify the high price?

Design – Not another gaming headset

The main selling point of the EPOS Sennheiser GSP 601 gaming headset is undoubtedly its looks. However, the GSP 601 doesn’t just get some bright pink or fluorescent colour splashed across it – the colours are thoughtful and the overall design is so damn good. 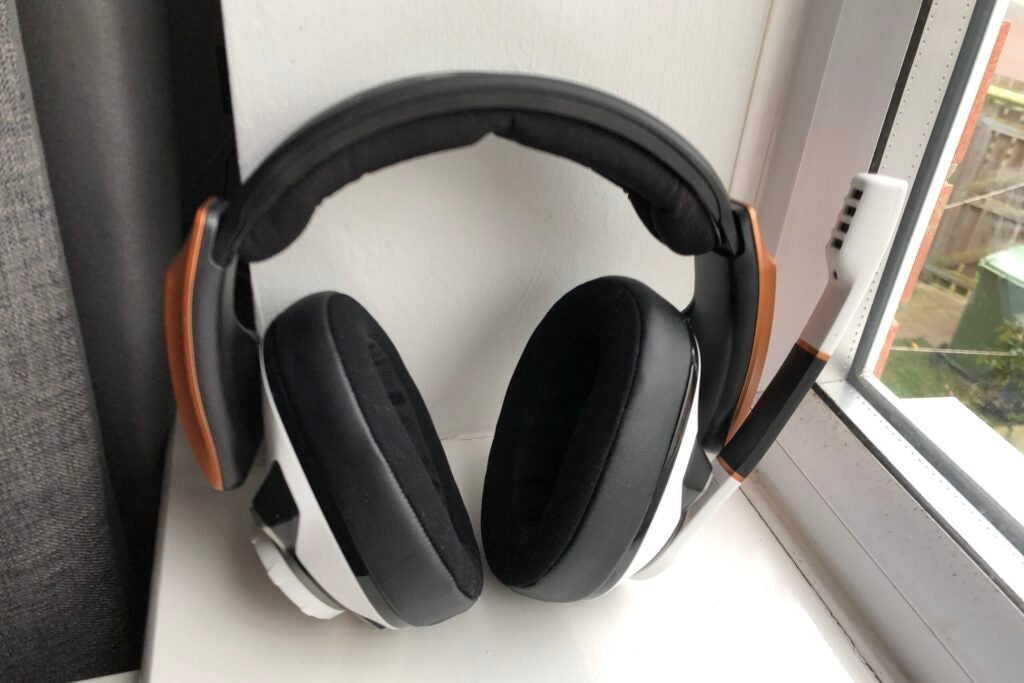 The band and the cushioned ear cups are black, stopping the headset from taking things a bit overboard. Your attention will be grabbed by the white of the outside of the ear cups and the bronze plates that sit just above them, with smatterings of both thoughtfully placed on the mic and at the volume controls too. You also get some white plates in the box if you’d like a more uniform look.

The overall look gives off robotic vibes, but its the combination of colours that really sells this headset as something to add about 100 style points to your gaming setup. 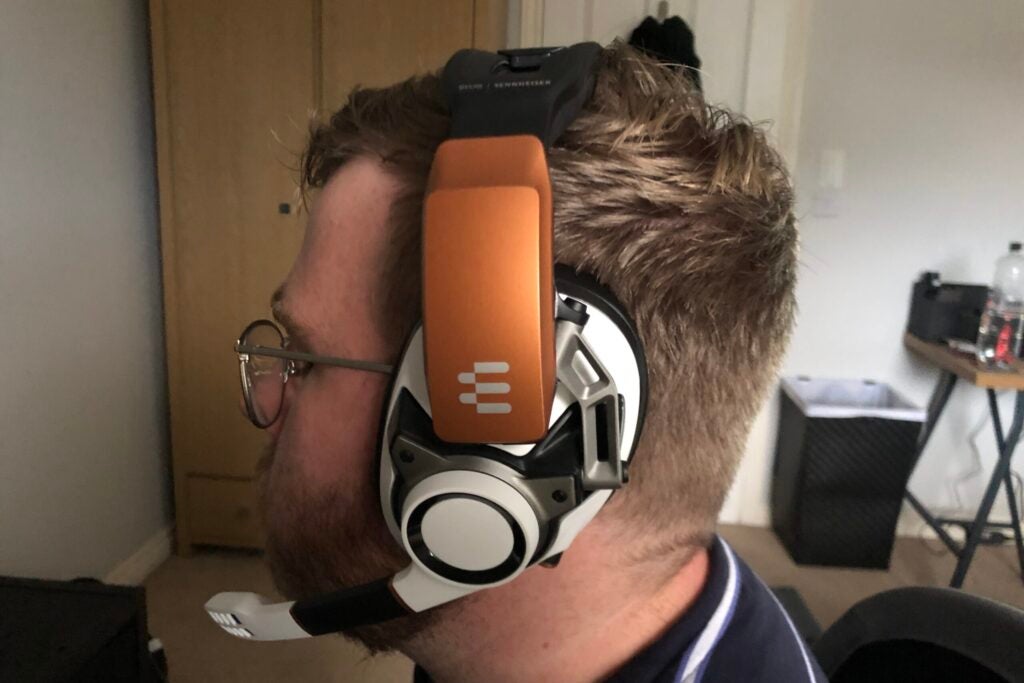 Nothing about the GSP 601 headset looks or feels flimsy – the microphone is sturdy while the band is easy to adjust but rigid. The large cushioned ear cups combine with a padded layer on the band to make for a fit that will leave you unbothered by these headphones for hours on end.

If this particular colour combo isn’t for you, the equally stylish GSP 600 is a black and red variation, while the GSP 602 is a blue and gold edition.

When it comes to features, the GSP 601 is quite the no-frills device. There’s no fancy audio standards to speak of here, which may disappoint those who expect something a bit more advanced for the near £200 price.

Being a wired headset, the GSP 601 is usable across almost any device you think of, with EPOS touting the compatibility to cover “Mac OSX, PS5, Xbox Series X, PC / Soft phone, PS4, Xbox One, Switch.” There’s a 1.2m combined mic/audio cable for console use, and a 2.5m cable with mic and audio splitter for PC gamers. 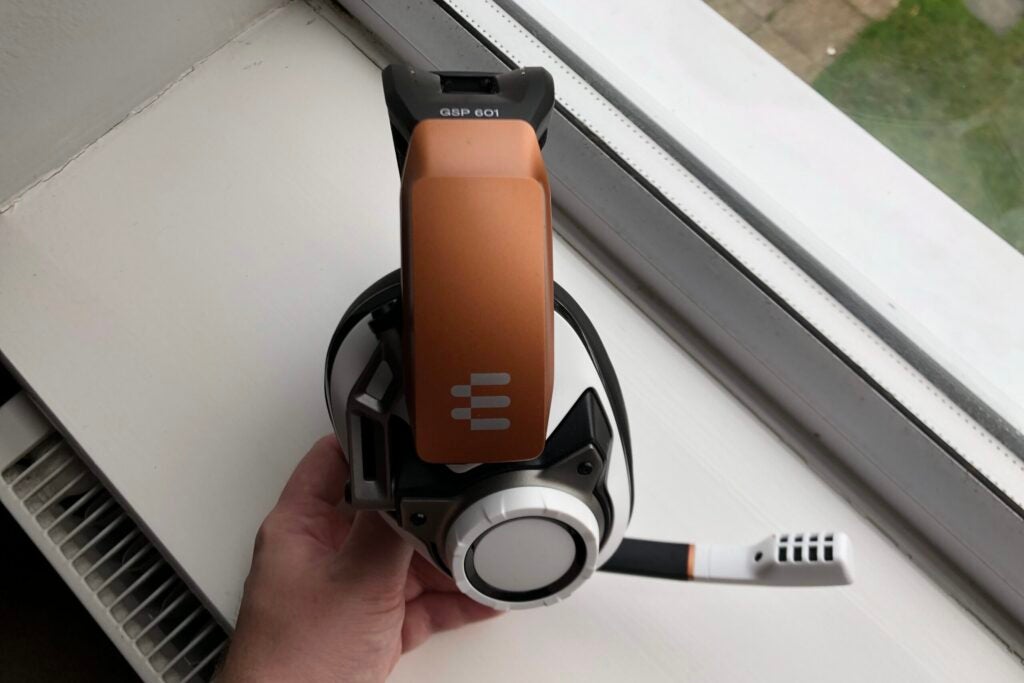 EPOS Sennheiser GSP 601 is super easy to tinker with when you’re mid-game thanks to the on-headset controls. To adjust audio, you simply turn a dial on the right side of the headset.

To use the mic, bring it down from its upright position. If you’re not using the mic, or need to quickly mute yourself before someone rudely bursts into your room, simply move the mic back up. The solutions are extremely simple and cause absolutely no fuss.

While design is the key reason to pick up the GSP 601 headset, you’ll be glad to know your cash does indeed get you some strong audio quality.

When in-game, you’ll get crisp dialogue and clear differentiation between sounds when the action kicks in. These capabilities also make this headset a decent choice for general PC use, with music and video audio all coming across extremely clear.

The large closed acoustic over-ear design also means these do a decent job of blocking out ambient noise, even without any added noise-cancelling tech. The GSP 601 can also get extremely loud without being tainted by much distortion, if you’re one for blaring out your in-game audio or favourite tracks.

Unfortunately, those looking for a headset for competitive gaming or something capable of pleasing an audiophile’s ears should probably look elsewhere. The lack of features mean you don’t get any kind of detailed surround sound here, making this a poor option for gamers who like to know which direction that distant gunfire is coming from.

For the music fans, the GSP 601 are really only suitable for casual use. There’s a distinct lack of bass with this headset, leaving out a disappointing chunk of what would otherwise be a fairly premium audio experience.

Should you buy the EPOS Sennheiser GSP 601?

The EPOS Sennheiser GSP 601 is an extremely stylish premium gaming headset that comes in at a price of £199. The pricing puts it £30 above our highest rated headset, the Steelseries Arctis 7. By comparison, the Arctis 7 offers more impressive audio, a similarly strong build quality as well as wireless capabilities.

The wider market certainly offers you the choice of paying less than the GSP 601’s price, while still getting a strong audio experience and, in some cases, decent looks to boot.

However, the EPOS Sennheiser GSP 601 has an inarguable level of class, sporting a design quality far beyond the majority of the gaming headset market. Premium build and gorgeous design have to be top of your shopping list if you’re buying the GSP 601, as the audio capabilities are mediocre at best.