The first episode of Elea is full of bugs, awkward voice acting, wonky animations and boring puzzles. And yet, somehow, it remains intriguing. Its story is deeply personal, and its sci-fi setting—fleshed out with short, sharp text descriptions—feels believable. It gets weaker as its goes on, but its willingness to change pace abruptly and lurch into bizarre, unexpected scenarios has left me curious to find out what happens next.

You play River Elea Catherine Jones, a space scientist in the late 21st century. In 2073, the Earth was hit by a disease that made every newborn child increasingly violent. In response, everyone stopped having children, and to escape the disease humanity searched for other worlds to colonise, including an Earth-like exoplanet called Solace. A huge ship, Pilgrimage, set out for Solace, and was never heard of again. River’s husband was among the crew, and 13 years on she’s part of a mission to find out what happened.

It’s a linear exploration game that’s light on interaction, but it avoids being dull. You start by padding through your house back on Earth, which is crammed with sleek gadgets to fiddle with (alongside some of the prettiest bathrooms I’ve ever seen). The introduction stretches on a little too long, but it soon becomes chaotic, jumping back and forth between a series of memories, and you can expect alarming changes of paces and plenty of psychedelic visual glitches. 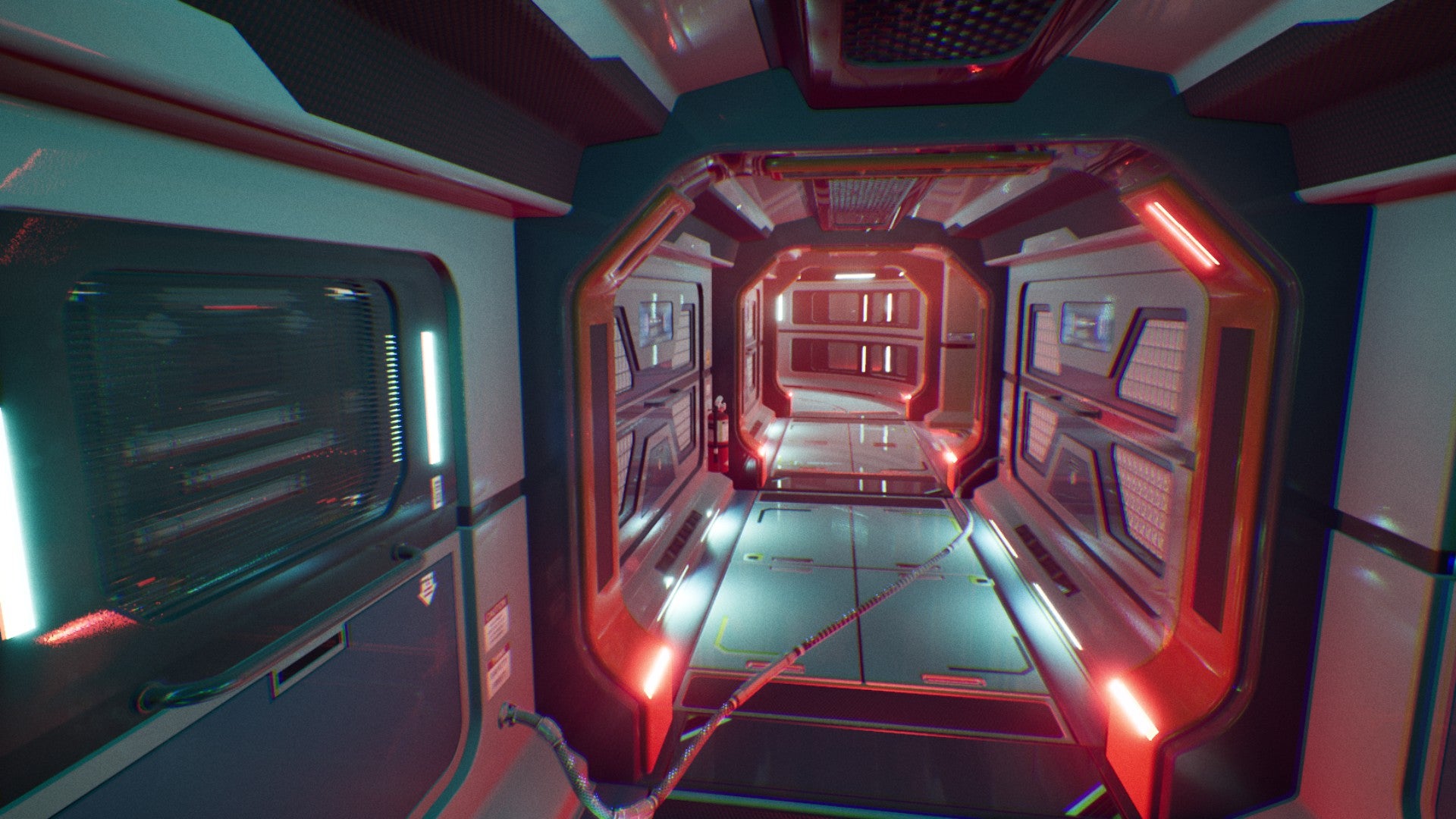 The constant switching keeps you guessing about what’s coming next, which makes you want to push on. You open a door, and it turns into a pitch-black horror game, before flinging you into a dream sequence in which you’ll walk, confused, through the same environment repeatedly until you figure out how to break the pattern.

Elea is at its best when it’s distorting the world in front of your eyes. One section takes place in a single room overlooking the sea. It looks like a generic sci-fi room, until a giant bubble appears, warping the flashing lights behind it. That bubble transforms into a tangle of red ribbons which unfurl into a hologram of a nearby planetary system. Then, out of nowhere, a giant whale made entirely of sparks smashes against the glass, exploding in a shower of light, before your vision fades to black.

It’s ambitious with its camera work, too. It mostly takes place in first-person, but occasionally jerks to a third-person perspective that remains locked in place even as your character moves around. It should feel jarring, but the timing makes it feel like out-of-body experience, and it doesn’t last long enough for the illusion to shatter.

When it’s not distorting your vision, it’s easy on the eye. I spent twenty minutes in a memory from Mars just staring at the towering metropolis that humans had built there, the buildings all lit in different colours, smoke stretching off to the horizon, while the hazy outlines of people I’d met in the past admired the view with me. 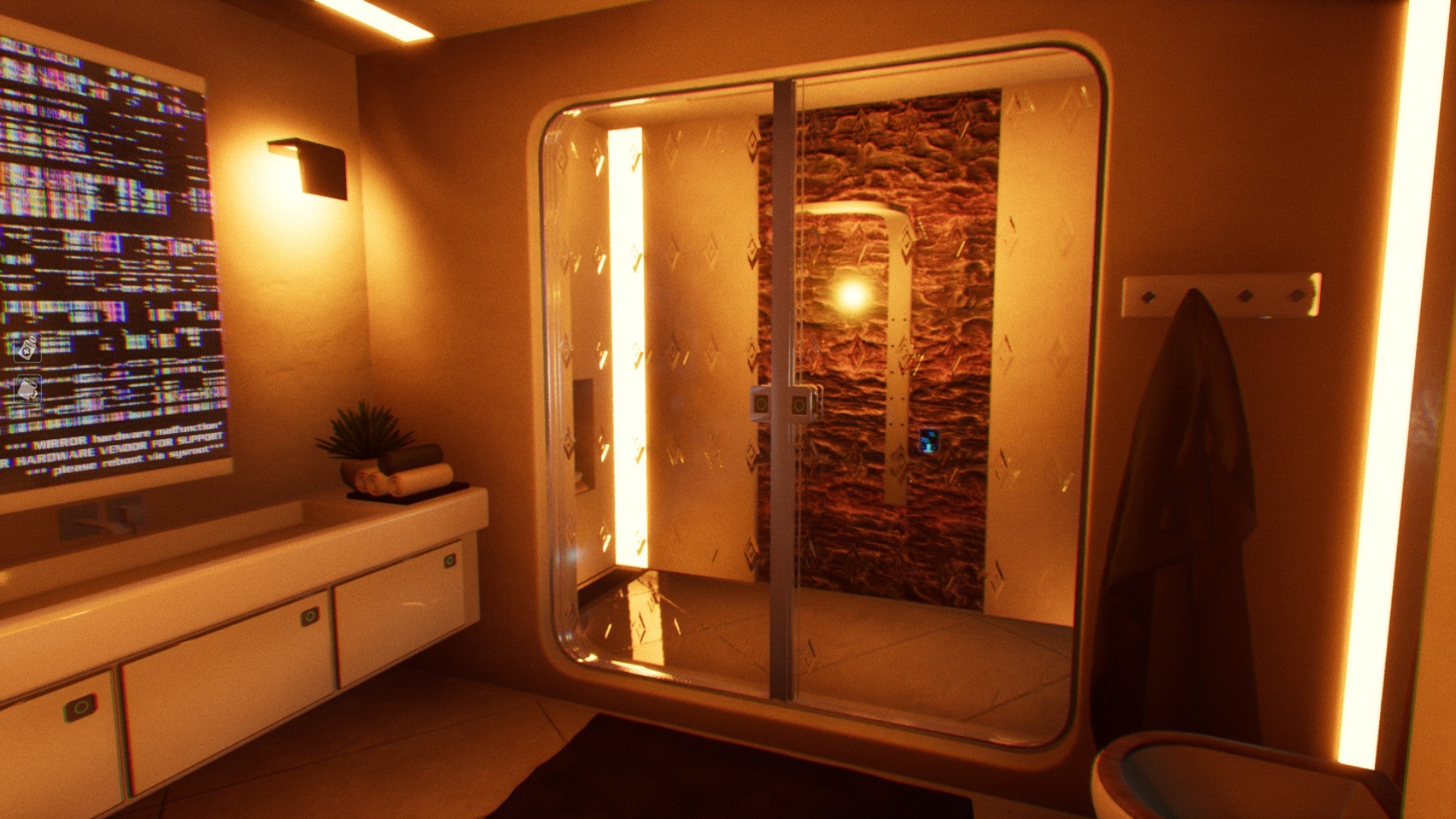 You don’t have time to think about what it means, but it lays the groundwork for River’s personal tale via phone call with her husband, Ethan, along with monologues about why she’s kept her old prom dress her mother bought her, or how Ethan never does the washing up.

In the second half, when you finally get aboard River’s ship, the world is fleshed out via email logs, data pads and magazine articles. The writing is nothing special, but each paragraph is packed with new ideas that make you want to read on. You’ll find out about the chaos and protests surrounding the discovery of the disease, what role extra-terrestrial life played in finding humanity’s new home, and how the event changed opinion on the existence of God.

By fleshing out details that aren’t central to story, its version of the future becomes far more believable. And unlike other text-heavy games, it never overloads you: you’ll find at most one or two things to read in every room, each of them short enough to get through in a minute or less. I read absolutely everything I came across.

Sadly, it loses steam in its final third. You can roam around River’s ship, and I had fun poking about the living quarters, admiring the shiny coffee machines and futuristic gym. But it soon turns into a straightforward adventure game that spoon-feeds you all the answers.

The facade of a freely explorable ship falls away. Doors that were open are now barred, while others are only accessible during specific story windows. And despite the environmental detail, the ship never feels alive. Each crew member simply stays in one place, and few will say anything to you (and even when they do, it’s just a line or two). 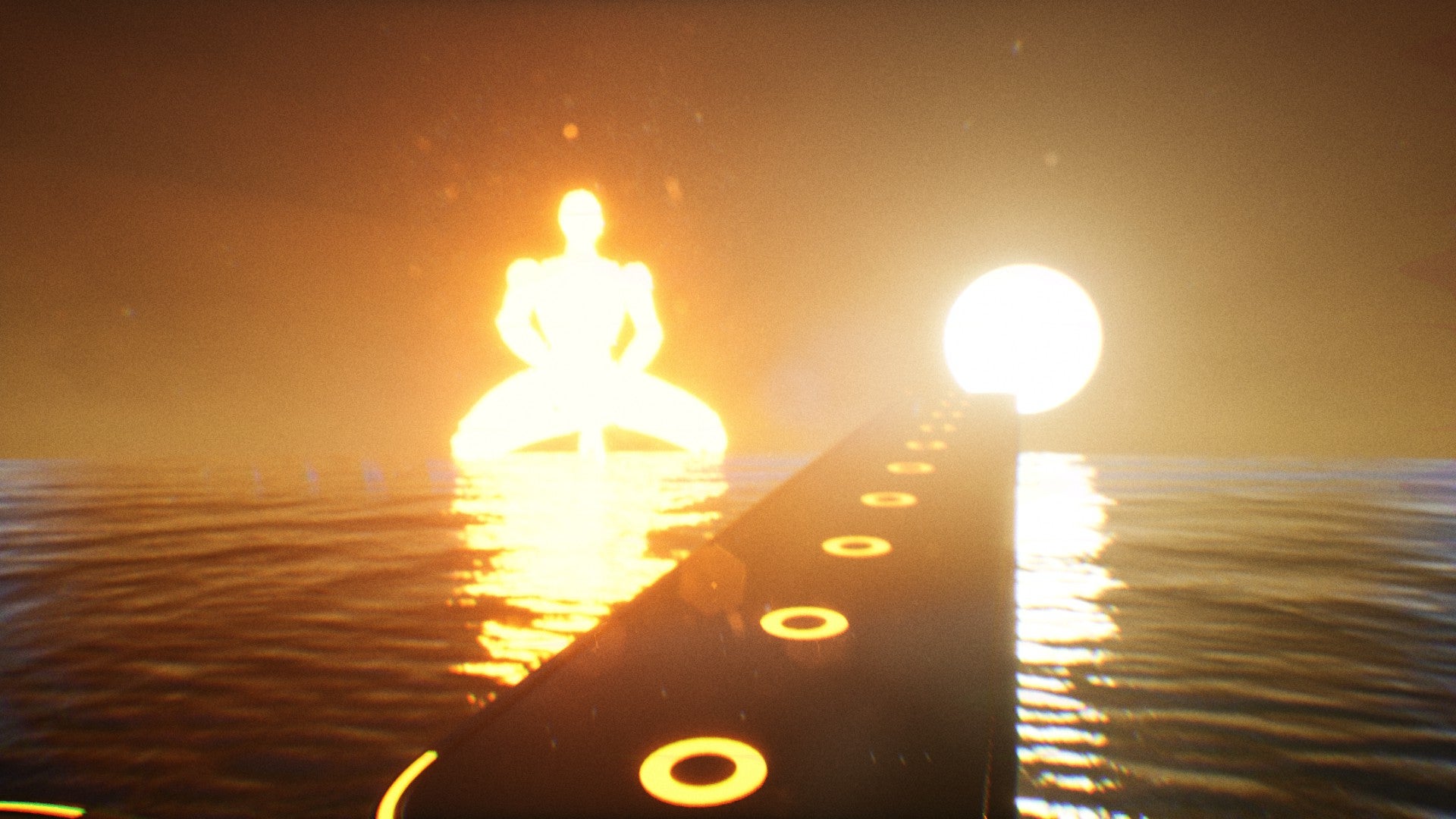 Elea feels rough around the edges from the start, especially in its stiff character animations, and with less to distract you, it begins to feel more and more like an amateur project. For example, you can interact with cupboards to pull out objects and spin them around, but when you put them down they’ll zoom directly back to where they were, clipping awkwardly through the solid door.

You’re never more than five minutes from another bug or performance problem, including random one-second freezes that reset with your character looking up at the ceiling. It could’ve done with another month in Early Access to iron out the kinks.

And while the voicing of the main character is fine, side characters falter. What should’ve been a heartfelt recorded message from River’s son falls flat because he sounds bored, like he’d rather be doing anything else.

Towards the end, it hints that Episode 2’s world might be more hostile, and that worries me. Episode 1 is light on action or combat, save for a final chase sequence in which you throw a single punch. It’s painfully clunky, and feels out of place, a fact only highlighted by the random slow-mo that it triggers. 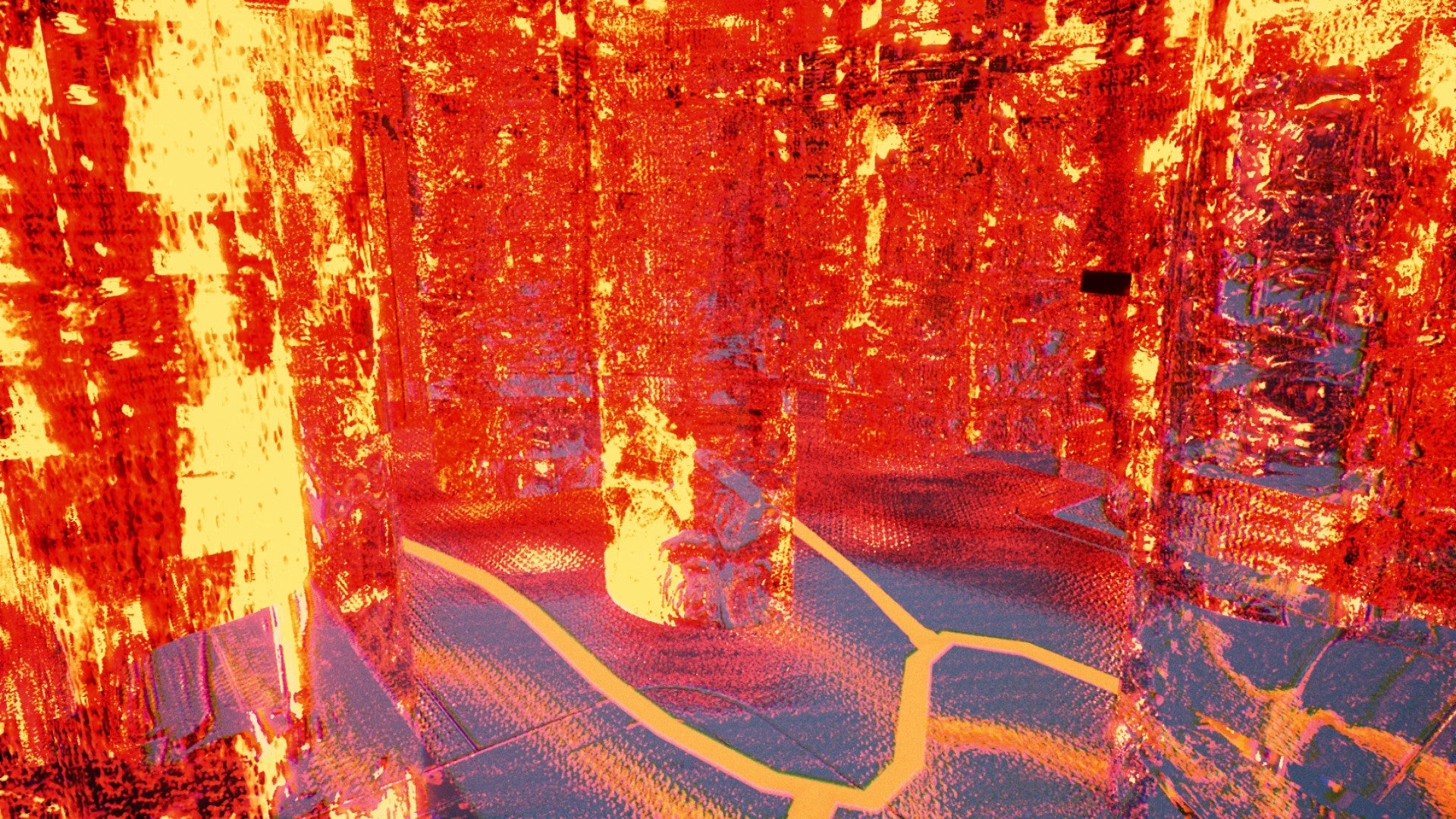 And yet despite those flaws, I’m willing to give Elea another shot. Its attention to detail elevates what could’ve been a generic sci-fi setting into one you can’t wait to find out more about. The time it invests in making the story personal pays off, and I’m curious to find out what happens to River—and her missing husband—in Episode 2.

Elea’s first instalment gets less interesting as it goes on, and if that trend continues then Episode 2 could fall flat, especially if bugs and performance problems remain. But it sets up a fascinating world that promises a deeply personal story, and it’s not afraid to switch gear and throw odd, dream-like sequences at you. By playing with your expectations, it makes you want to push on just to see what’s around the corner.

It’s by no means a classic, but it’s a decent foundation for what could be a compelling sci-fi tale.