Elder Scrolls Online has come a long way since its original 2014 release. The MMORPG has evolved from an underwhelming fantasy affair into a sprawling adventure that truly embraces Bethesda’s iconic universe. The studio has taken fan feedback in its stride, crafting fun and exciting updates that build upon its systems in positive ways. This level of quality continues with Summerset, a new expansion which takes us to a collection of isles not explored by the series in decades.

Summerset is engineered for both veteran players and Elder Scrolls Online newcomers. You can opt to jump straight into the experience or play through a short, streamlined tutorial that walks you through combat, exploration and the progression system. There’s plenty of features it skips over, only covering the fundamentals as not to waste your time and instead thrust you into the thick of things.

As someone with minimal experience with Elder Scrolls Online, it gave me a solid grasp on how things worked before embarking on my first quest. Those familiar with the series will feel right at home with movement and combat, although it admittedly lacks the weighty impact of something like Skyrim due to its MMORPG restrictions.

Your character can be customised to an immense degree. Weapons, clothes and individual skills are yours to choose from, with this arsenal growing with each passing minute. Individual abilities are upgraded and unlocked as you progress, meaning there’s always a breadcrumb trail leading the way in addition to the usual assortment of quests. There’s more depth here than Bethesda’s single player Elder Scrolls efforts. Hopefully the elusive Elder Scrolls 6 takes some inspiration from the depth on offer in Online.

The brief tutorial also bears some narrative importance, shepherded by a strange woman known as Oriandra who outlines your purpose in this world. At the time of preview, there wasn’t any voice-acting in the game, with characters communicating through what sounded like a text-to-speech programme, leading to moments of unintentional hilarity. Bethesda assured me this will change in the full release, so if anything it gave the demo a charm I came to appreciate. 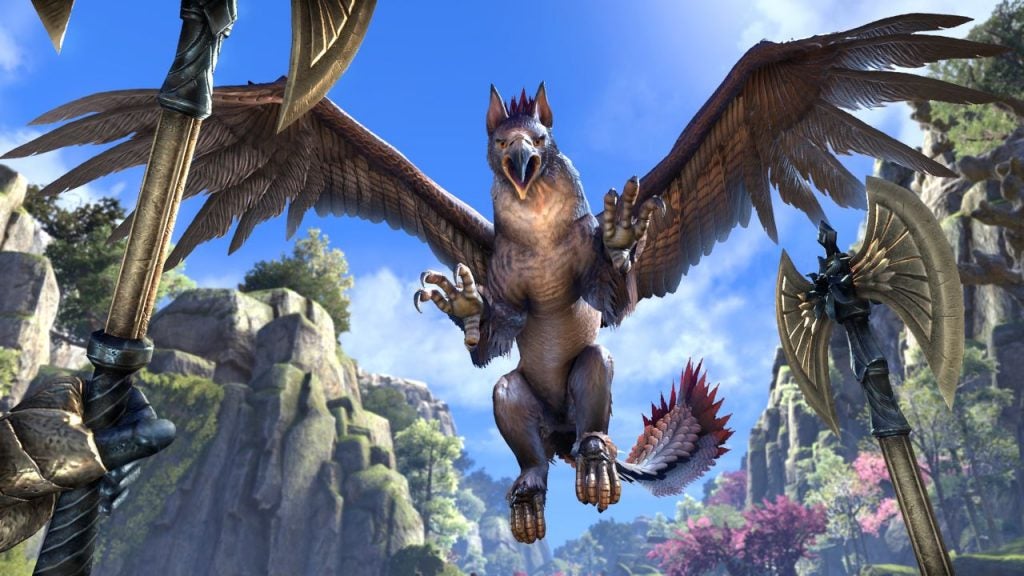 After the tutorial, you’re immediately teleported to the Summerset Isles. It’s beautiful, presenting a towering mixture of high-fantasy architecture and bright, bounding plains filled with intriguing nooks and crannies to discover. It makes a great first impression, essential to captivating new players in MMORPGs.

Summerset immediately establishes your place in this world and a reason to care about its inhabitants. Upon arrival, paranormal creatures clawing away at townsfolk is the first sight to greet you. These gnarly monstrosities managed to flee before any chance of retaliation. Fortunately, the locals were happy to dish out quests and gossip to uncover the mystery.

You’re free to explore Summerset Isles to your heart’s content right away, although be careful not to venture into areas littered with enemies above your capabilities. I luckily didn’t do this, opting instead to slash away at crabs on a nearby beach like a true amateur before venturing into town and taking on my first quest. Despite its scale, everything in the opening area felt accessible to a relative genre newbie.

Considering this was a closed demonstration, I didn’t get a taste of how interacting with other players will work in Summerset. Instead, I took on a murder mystery quest that lasted the best part of an hour. It was a cleverly written escapade with personalities I came to care for, even if the lack of voice acting acted as a jarring disconnect at times.

You can expect the typical Bethesda quirk of NPCs being reminiscent of zombie-like mannequins with stiff movements and expressions. There were sadly no noticeable advancements made in the facial or body animations. It’s easier to forgive when taking into account its scale as a massive online experience, but it can still feel at odds with the luscious world of Summerset and its stale citizens.

Bethesda clearly has ample lore to dig into here, shown through the abundance of literature in its books and scrolls alongside characters more than happy to talk your ears off. It’s unfortunate that the quest design doesn’t reflect this ambition, which resorts to the tried-and-tested formula of chatting to folk before prowling a dungeon.

Granted, this was the opening stages of an expansion that promises 30+ hours of quests, so hopefully Bethesda has bigger plans up its sleeve for the full release. One thing is for certain: Summerset is a great continuation for fans who have passionately followed Elder Scrolls Online over the past four years. The Morrowind expansion has been built upon with extra depth and nuance you likely won’t discover until a dozen hours or so of play. Summerset Isles hasn’t been touched since Elder Scrolls: Arena in 1994, meaning Bethesda has an opportunity to introduce a niche location to an entire new generation of players. From what I’ve seen thus far, it’s presented a gorgeous yet predictably buggy locale I’m eager to explore, even if I might find myself overwhelmed by mountains of daunting lore. However, the general flow of gameplay is introduced with such finesse it feels like a manageable task for me and, hopefully, many others.

While not playable in this demo, Summerset Isles will introduce a new playable class as part of the Psijic Order. This secretive organisation introduces a new skill line you can adopt with a variety of skills and equipment to obtain. Long-awaited changes to the jewelry crafting system and other mechanics will also be introduced, included 12-player trials and more.

Elder Scrolls Online: Summerset appears to be another solid expansion to an MMORPG that has carved its own unique identity since launching in 2014. The fact this also feels curated for newcomers is an excellent move by Bethesda to get the uninitiated involved.

For the hardcore, Summerset presents another substantial chapter is a growing world filled with new characters, quests and lore to uncover. Fantasy fans are sure to eat this right up.