When Elder Scrolls V: Skyrim was first unveiled on Nintendo Switch it was nothing short of a shock. Bethesda was a stranger to Nintendo platforms and seeing what is arguably its biggest title grace the hybrid console was a sight to behold. Now that it’s finally here, how does the gargantuan RPG hold up on the Switch? Well, we’re happy to report that it’s an exceptional port with a few unique tricks of its own to boot.

If you’ve never picked up Skyrim before, this isn’t the worst place to start. The Switch iteration includes the base game and all of its expansions, meaning every single quest, location, and piece of equipment is ripe for discovery. Few compromises have been made to fit the epic RPG onto the console, which is something I genuinely didn’t expect. Playing in either docked or handheld mode, it feels akin to the PS3/Xbox 360 versions released in 2011, albeit with a few extra bells and whistles.

The greatest appeal of Skyrim Switch is having the option to play something so vast wherever you are, jumping into the huge world of Tamriel on the bus, train or toilet. It’s almost unbelievable at first, slaying dragons and raiding dungeons on my morning commute. It also performs best in portable mode, hiding visual blemishes that occasionally surface such as NPCs and environmental textures popping in without warning. 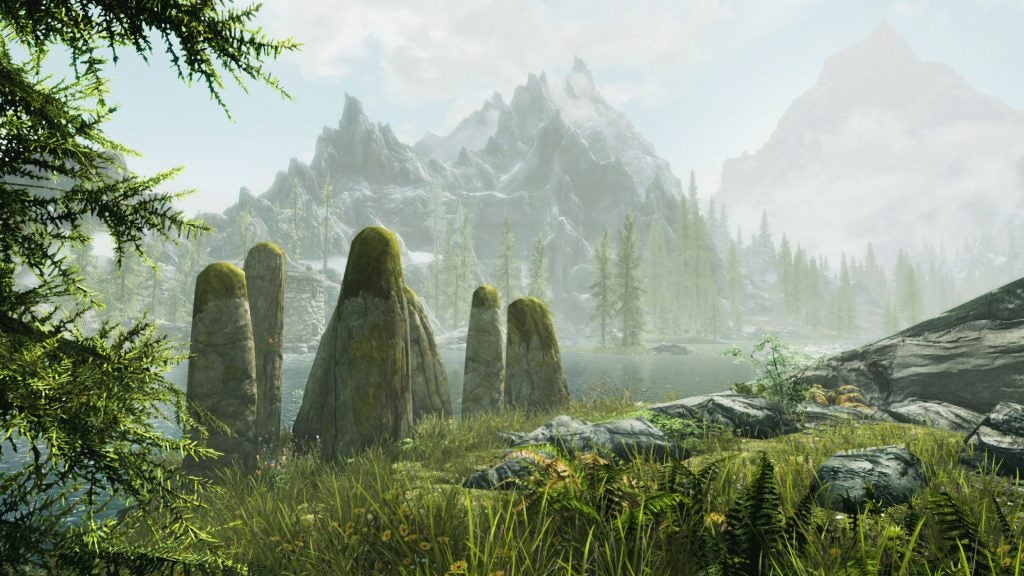 These problems proved persistent as I played in docked mode but never ruined the experience as I was drawn to new locations like a fascinated child. After not touching Bethesda’s RPG for several years, it was almost nostalgic to return. You can lose hours simply wandering around in search of whatever tickles your fancy. And if you never picked up the expansion packs before, there’s plenty of new things to see.

Sadly, much of the moment-to-moment gameplay has begun to show its age, failing to impress with mundane combat and static characters populating its world. Individual attributes are upgraded through continuous use, allowing you to expand what can be used in your arsenal with each subsequent step forward. It’s a satisfying progression system, but one that proves ultimately shallow after several hours of play.

Luckily, Skyrim Switch has a few special features to help alleviate some of its monotony. These come in the form of exclusive items that can be gained by either scanning select amiibo or finding them on your travels. You can get your hands on Link’s Tunic, Hyrule Shield and even The Master Sword. Seeing them in Skyrim is weird at first, but undeniably charming. 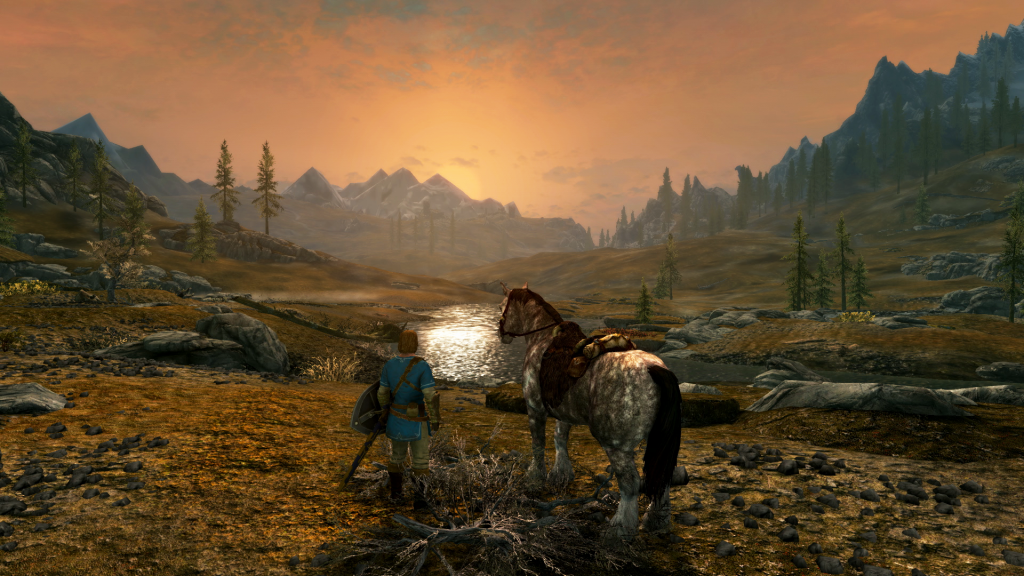 Skyrim has journeyed onto Nintendo Switch with great success, making only a few minor changes to original experience to make it playable on the move. Combine that with some nifty new additions, every expansion and you’ve got one hell of a ride to look forward to.

While not the definitive way to play Skyrim in 2017, it is certainly far from the worst.

Read on for our review of Elder Scrolls 5: Skyrim Special Edition.

Available on Xbox One, PS4

I don’t want to be accused of damning with faint praise, so let’s make one thing clear from the off. Remastered and enhanced for Xbox One and PS4, The Elder Scrolls: Skyrim is one of the best, most satisfying RPGs ever made. In terms of its world-building, systems, art and design, it’s arguably the best RPG of the last console generation, and while it has lost some of its capacity to astound, it’s lost none of its power to immerse. Start playing it now and you may not need another game until springtime.

Seriously. As far as I’m concerned, it’s right up there with GTA 5 and Dark Souls in the pantheon of games that can totally take over your life.

That said, it’s more of its time than you might expect. When Skyrim emerged five years ago it was groundbreaking; nobody else had produced an RPG with a world that felt so open, so expansive or so real. Playing it again, it’s easier to see the awkward joins and blemishes, from the stilted, sometimes bizarre performances of the NPCs to the lifeless, motionless vegetation and occasionally clumsy quest design. We’ve been spoilt since 2011, with RPGs of the calibre of Dragon Age: Inquisition, Dark Souls 3 and The Witcher III catching up with Skyrim and in some respects leaving it behind. That’s the problem with these gaming landmarks; something even more impressive nearly always comes along. 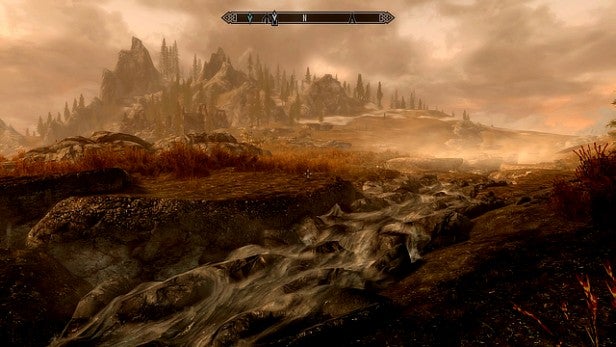 Bethesda’s remastering is substantial and occasionally triumphant. We get a 1080p boost in resolution and a pretty solid 30fps frame rate – rarely a given on the last gen console versions. The ultra quality textures from the original PC version have made it through, along with much longer draw distances, nice depth-of-field blur and an explosion of flora in the near and middle distance, providing a significant layer of added scenery. Water and reflection effects are more realistic than in the original version, making Skyrim’s Nordic rivers and waterfalls all the more spectacular. The drifting snow, rain and mist can be absolutely stunning. Perhaps the biggest improvements, though, are in the lighting and shading engines, with softer, more authentic shadows and some rather lovely volumetric lighting effects, best seen in the god rays that shine through trees or through a crevasse into a network of tunnels.

We’re still not talking, however, of something of the quality of Uncharted: The Nathan Drake Collection or Gears of War: Ultimate Edition. The scenery is beautiful, but it lacks life and motion. While the wilderness vistas are breathtaking, some of the textures used for stonework or the inside of a dungeon still seem comparatively low-res, even clumsy. Facial modelling and animation – both a weakness even in Fallout 4 – have improved but remain unconvincing. And if you’ve seen some of the work done with mods on PC Skyrim, you might feel disappointed that Bethesda didn’t take things further. PS4 Skyrim always looks good and can look great, but it could have looked absolutely amazing. 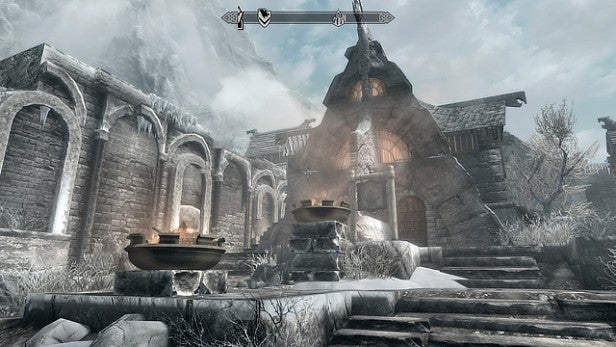 You can, of course, mod the game yourself, with Bethesda hosting a range of downloadable mods for Xbox One and PS4. Actually getting hold of them is a bit of a hassle, involving signing up to Bethesda.net through your browser, selecting mods there then accessing them from your console, but it works. It’s great to see Bethesda bringing this kind of PC functionality to the consoles, even if the PS4 version suffers from a 1GB restriction and many of the more impressive graphics mods aren’t available. Still. given that they can slow even a hefty PC down to a crawl, this might not be such a bad thing.

Those new to Skyrim might not even notice some of the benefits. For one thing, this version includes the post-release DLC, giving you Skyrim’s vampire-themed and house building expansions plus the more substantial Dragonborn, with a whole new island to explore. The extra content’s welcome, but most will have enough to get on with just in the main game. For another, Bethesda has had years to iron out Skyrim’s various bugs, and the result is probably the most trouble-free experience I’ve ever had playing a Bethesda RPG at launch. I’ve yet to witness a graphical glitch, missing NPC, broken quest or system crash, which seems near-miraculous after Fallout 4. Newcomers might take this for granted. Those of us who’ve grimaced through several Bethesda titles close to launch will not. 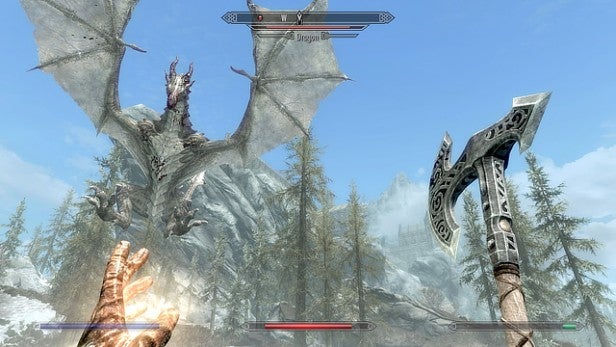 This leaves you free to enjoy what Skyrim does best – delivering one of the richest, most immersive game worlds of any video game, plus the freedom to explore in your own sweet way. One of the game’s strengths is its fairly narrow focus. Instead of trying to cover all the fantasy bases, it concentrates on the sort of mythical Nordic fantasy that would have been familiar to Wagner or Tolkien, where mountain, snow and rushing water are the big visual motifs and the dragons, wolves and haunted ruins feel straight out of some Norse saga. This permeates everything from the stunning score to the voicework to the consistently impressive visual design. The result is that Skyrim has a sense of place that few RPGs – even now – can match. It’s not merely a question of the time and budget, but of having the mindset to put it all together.

And it’s a world that’s easy to get lost in. Skyrim is actually at its weakest at the points where many other RPGs try to hook you, through the combat systems or an addictive levelling/upgrading/slaughter cycle. Five years on, combat feels woollier and less responsive than it did at launch, while you rarely get that excited by the prospect of a new weapon, new spells or new skills. Yet Skyrim grabs you through its incredible sense of exploration, and through the web of activities and storylines it tangles you up in. 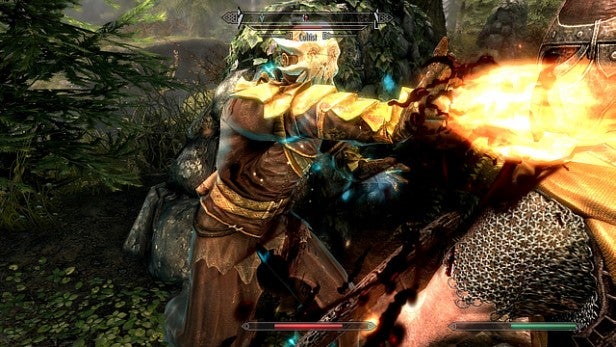 Sure, every player will end up duelling with dragons and discovering their destiny as the Dragonborn, but it’s what happens in between that counts; the cults you’ll break up, the vampire lords you’ll battle, the crimes you’ll investigate, the alliances you forge. Quick digressions become absorbing questlines. A step off the road turns into the start of something new. This is part of what makes Skyrim so endlessly replayable. Coming back, I’m encountering quests and characters I never found before.

Just be prepared: at times Skyrim might not be quite as awesome as you’ve been told or you remember. Things that wowed the gaming world at launch, like those epic mountain landscapes and wandering beasts, have been done better since by subsequent games, including open-world action games like Far Cry 4 and Far Cry: Primal.

The magic system can feel basic, while Skyrim’s bows lack the handling and precision of the bows in more recent first-person games. The Witcher III and Dragon Age: Inquisition have stronger characters and more convincing dialogue, not to mention a more cinematic feel. And while I’m grumbling, would it really have killed anyone to turn the Dual Shock 4’s front touchpad into a shortcut to the map? Why on Earth was it made the ‘wait’ button instead? 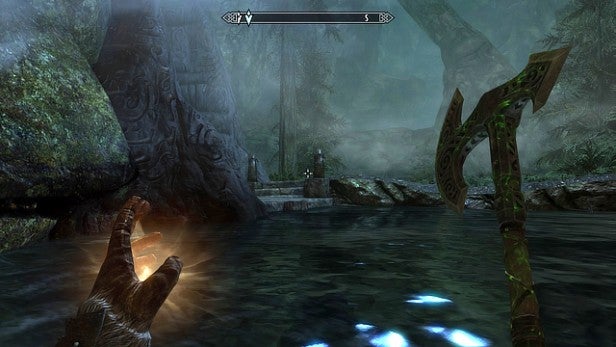 Yet when it comes to it, Skyrim still looks and feels magnificent, the minor disappointments evaporating with each new quest or discovery, with every passing hour. As with some other recent console remasters, there’s a sense that this isn’t the definitive version – the PC version still reigns supreme – and that there’s not enough that’s actually new here to justify a second run through. Both points are true but arguably beside the point for two groups of people. Those who have never played Skyrim should do so, and this is the best way to do it if you haven’t a PC. And for those who’ve already sunk hours into Bethesda’s epic on the Xbox 360 or PS3? Well, you’ve played Skyrim and played it to death, but have you ever played it looking like this? You might think you can hold off until the next Elder Scrolls, but who’s kidding – can you resist one more trip to the Northern realms?

For all the visual enhancements and lusher vegetation, this Special Edition can’t disguise the areas where Skyrim has dated. Other games have built on the foundations Bethesda laid. What was once jaw-dropping now seems merely remarkable. Yet get stuck into Skyrim and it’s still a magnificent saga, with one of the gaming’s most compelling worlds and the kind of breadth and depth that subsequent RPGs have almost always failed to match. If you’ve had your fill of Skyrim then there’s not enough new stuff here to make a second trip essential, but if you’re looking to start or rekindle an addiction, fill your boots.