Doro’s Liberto 810 is a basic touchscreen phone that aims to make it easy for tech novices to get to grips with a smartphone. It’s based on Android but has a heavy customised layer on top called Doro Experience. This aims to unclutter the homescreen and make using the Liberto 810 much simpler and friendlier to use. In some respects it succeeds but in many others it fails and is not helped by very basic hardware. 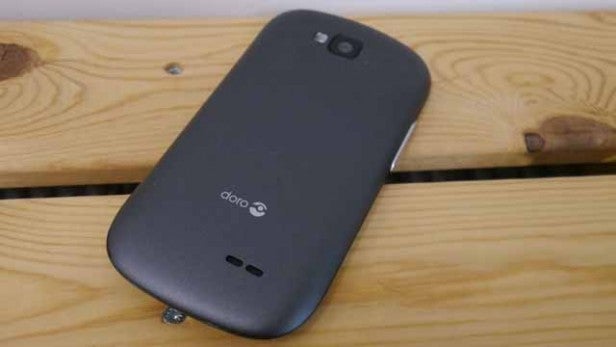 The Liberto 810 has a charming design. It’s reasonably chunky and heavy but has nice rounded edges and is easy to hold for long periods one-handed. The tapered bottom gives it some style and the hard plastic back feels really robust, something not all removable backs manage.

The volume rocker on the left juts out enough to be felt and used by touch alone but not so much that it spoils the look. It’s the same for the power button at the top.

The three buttons on the front of the Doro are another matter, though. Slightly raised and with a rubberised texture they do look a bit naff, however from a functional perspective they’re perfect for people who might not get on with the soft-keys that most Android phones favour.

From a design and build-quality perspective the Doro Liberto 810 is well made. 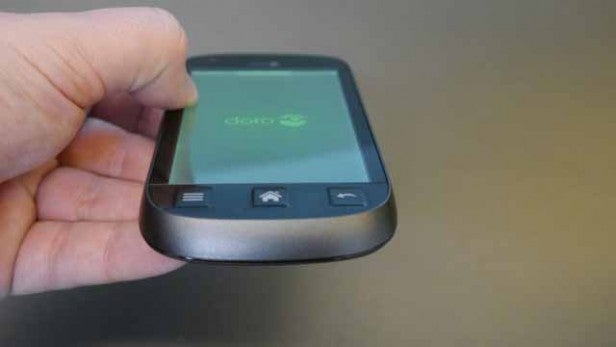 Unfortunately, the screen is not as impressive. The 4-inch screen has a resolution of 800 x 480, which is not too bad. Reading text on websites isn’t too blocky or pixelated. The problem with the Liberto 810’s screen is that it’s not particularly bright and the colours are muted. If you tilt the screen you’ll notice that it becomes difficult to make out. This is because the technology used for the display panel does not provide good viewing angles. All this means that you won’t particularly enjoy browsing through photos of loved ones on this phone.

It’s not just the image quality that’s an issue. It isn’t particularly nice to use because it is a bit springy. Rather than toughened glass most phones are covered in Doro uses a plastic overlay to cover the screen of the Liberto 810, which means it has a bit of give when you press it and collects fingerprints easily. It also means that the actual display is a little more recessed than on most phones you’ll find these days. All this adds to a less than premium experience.

With just a single core 1GHz processor and 512MB RAM to power it, the Liberto 810 is not particularly nippy in use. In fact, it’s slow. You’ll notice that even scrolling through the Doro Experience menus is slow a and stuttery process. Opening apps and occasionally selecting a menu item is also quite slow and can become more than a little frustrating. For example, opening the gallery with even just a few photos seems to take an age.

At TrustedReviews we use a suite of benchmark apps across all phones to baseline their performance. Unfortunately, none of these would work for us on the Liberto 810. Suffice to say that’s not a good sign.

You also don’t get much storage – just 4GB to be precise. As a counter to the low internal storage there is a microSD card slot that allows you to expand it by a further 32GB, although you will need to buy a microSD card and insert it into the fiddly slot at the back. 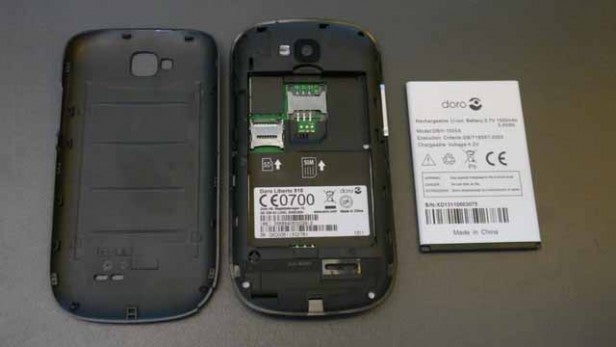 We’d hope for a lot more power and better specs for the £150 the Liberto 810 costs. Similar Android phones cost well under £100.

So why does the Doro Liberto 810 cost so much? It’s primarily because Doro has included a bespoke Android user interface (UI) designed to make it as easy as possible to use. Does it work? Well yes and no.

The fact that the hardware is so slow and the screen is low quality makes it harder to use than many cheaper phones in our eyes. We also experienced a lot of app crashes that land you back at the homepage. A particular example is trying to access the Wi-Fi and Bluetooth settings. However often we tried it kept throwing us back to the homepage.

In fact we finally gave up on trying to turn on Bluetooth using the settings page and did it by accessing the quick settings in the notification centre. We even experienced a few freezes when attempting to install apps that were so severe we had to remove the battery to get the phone to restart. Not exactly the definition of easy to use. A factory reset resolved these issues until the next time but that’s not good enough for a phone designed for the less tech savvy. We hope that future software updates can resolve at least some of these issues.

What is good is the simplicity of the UI. Icons and text are large and clear and there a tutorial to help you learn the ins and outs of the phone quickly. There is also a friendly list of apps you can download rather than having to trawl through the Google Play store, although this is available too. 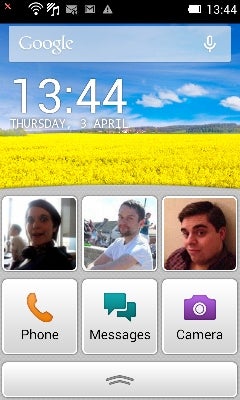 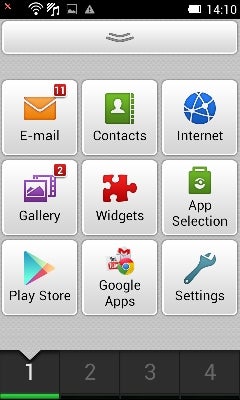 The homesceen has a large Google search bar for accessing the internet, as well as the option to add three of your favourite contacts for easy access to the people you call the most. Again this simple feature comes with a hefty dollop of clunkiness. Trying to add a picture to a contact is more difficult than it should be. While the Doro lets you take a picture from your contact page it’s not automatically added to the contact or the gallery. You need to take a picture from the photo app, go back to the contact and then pick the picture you want to use from the gallery.

Phone, text message and camera icons make up the rest of the homepage as well as a bar that provides access to five more screens with a variety of popular apps. It’s great that the Liberto 810 is already set up so comprehensively out of the box. It means you can get cracking straight away, if only it was more reliable.

Doro Experience lets you manage the phone remotely too – you can add and remove apps, calendar events, pictures and much more from a web browser. If you’re buying this phone for a technophobe then you’ll be able to remotely sort things out. It’s a very useful service.

The Liberto 810 is a solid phone for making calls and sending texts. Voice quality is good outgoing and the voice coming from the other end is loud, but not more so than most other phones we’ve reviewed. The loudspeaker gets to a reasonable level whether you want to use it for the on-board FM radio, watching video, listening to audio books or for listening to a call while you’re busy doing something with your hands. Even at full volume the sound doesn’t distort or hiss.

Swiftkey, a good texting app, is included with the Doro Liberto 810. It makes texting easy and the screen is responsive enough to presses too.

You get a 5MP rear camera and a low res front camera. Neither is very good. The rear camera may have a reasonably high megapixel count but it really struggles with contrast and low-light shots. With the LED flash on you do get a little more detail but it’s still quite poor. 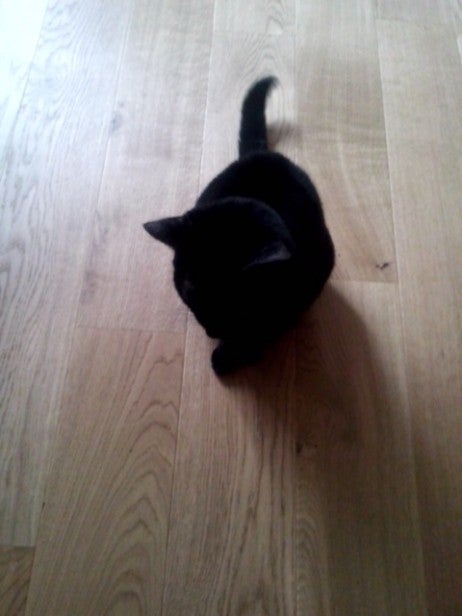 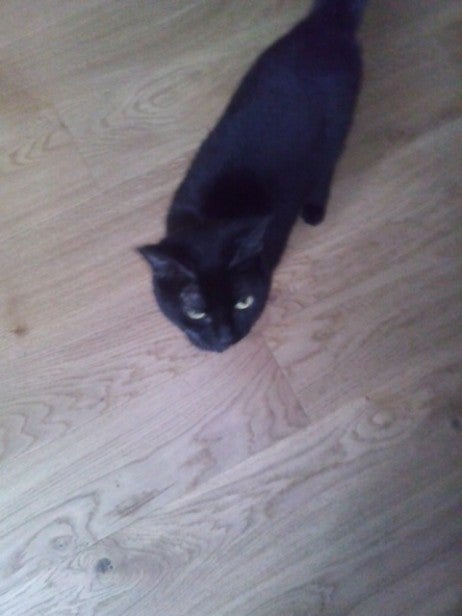 Without flash the camera struggles to deal with contrast. It’s a little better with the flash on (right)

The front camera is even worse. Images are grainy and very dull. Granted this isn’t a phone for the selfie generation but it’s also not very good for video calling.
We took some pictures of the London skyline to demonstrate the lack of detail when compared to the 2MP front camera on the iPhone 5S. It demonstrates well that there’s a lot more to a camera than the megapixels it packs. 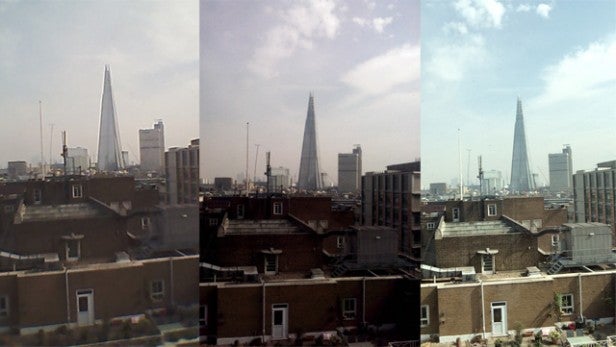 Pop the back off the phone and you’ll find a removable 1500mAh battery under the SIM and microSD card. Helped by the low-powered processor and low resolution screen it does a good job of keeping charge. If you use the phone for a few hours a day you’ll easily get two days of use from it but, like most smartphones, you’ll want to charge it daily if you use it a fair amount for browsing, listening to music (the Doro comes with FM radio and basic in-ear headphones included) or watching video. 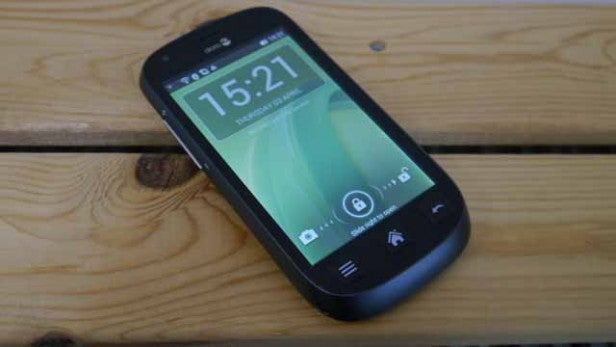 Should I buy the Doro Liberto 810?

It’s very hard to recommend the Liberto 810, particularly with its £150 price. The extremely capable Moto G, for example, can be bought for less than £100 and the difference in quality and specs between it and the Doro cannot be overstated. Couple the Moto G with a simple Android launcher like Wiser and you have a very capable and easy to use phone. Companies like Huawei and Acer also have simple versions of the UI baked into new phones.

Indeed, it’s really hard to understand what Doro is trying to achieve here. It specialises in making simple phones and does that well, but its lack of Android experience is clear to see and having Android adds little when it works so poorly on this phone. If you need to buy a simple, easy to use phone, the Doro PhoneEasy 621 is a much better options and costs just £60.

If you need a simple phone, buy a Moto G and add a ‘simple’ launcher or just buy a basic feature phone.