The user-friendliness, compact size and image quality of the Air 2S make it one of the most appealing drones around, particularly to those who need a camera that can perform in lower light conditions. Offering good battery life, solid build quality, a comfortable controller and a range of clever tracking and auto-shot modes, this is a fantastic package for the price.

DJI has firmly established itself as the first name in flying cameras, so the arrival of the Air 2S might not feel like particularly electrifying news.

However, in many ways the Air 2S is a very exciting product – particularly for those who primarily appreciate performance.

The DJI Air 2S is the smallest drone to offer a camera with a 1-inch sensor, promising excellent all-round image quality and the ability to record gimbal-stabilised 4K footage at a smooth 60fps.

To get that level of performance from a device that weighs under 600g, folds to the size of a beer can is a tantalising prospect for the demanding creative.

Add in DJI’s unrivalled bevy of safety features and decent battery life and you might have the next essential consumer camera drone.

Reliable, solid build quality has always been a characteristic of DJI drones, and the Air 2S maintains that reputation. Made of strong plastic, the Air 2S feels sturdy and steadfast for a folding drone. The gimbal-mounted camera is quite delicate, but the provided clip-on cover will keep it well protected when not in use.

The drone is also very light. Not so light that you won’t need to register it with authorities (for that it would need to be under 250g, such as the DJI Mavic Mini), but light and compact enough that you can fold it up, stick it in a bag, and carry it around all day on the off-chance you might want to whip it out and film something.

At 595g with battery, it’s amazingly portable given its flight and camera specifications, and when folded it takes up very little room.

Of course, you’ll need to bring the controller along, too. DJI has used the same design previously used with the Mavic Mini and Mavic Air 2, and it’s a clever one. Twist off the thumb sticks (there’s a space to store them in the controller itself) and it’s flat enough to store easily, while its pop-up phone holder can accommodate mobile devices up to 180 x 86 x 10mm in size. Cable adapters for Lightning, USB-C and micro-USB are provided.

The review sample provided was the Fly More Combo, which features the drone itself, the controller, three batteries, three full sets of propellers, four ND filters, a three-way charger able to accommodate all the batteries at once, and a small padded carry case into which most of the above can be snugly fitted.

This is a very good deal: the carry case is a lovely touch, as are the additional two batteries – and you may need those extra props, too, if you ever clip a branch or other obstacle while flying.

The Air 2S is one of the easiest to fly and safest drones I have used.

While it doesn’t come with full omnidirectional object sensors for obstacle avoidance, it does “see” forwards, backwards, upwards and downwards – meaning it should only collide with something if you fly it sideways into it

With four antennas on board, DJI boasts that the controller-to-drone range will stretch up to 12km with a 1080p live video feed in place. That’s in optimal conditions, naturally, but you’d be breaking the law to fly it out of eyeball range in any case.

During testing, I lost the video feed and control signal just once (it was only a couple of hundred metres away at the time, officer), and the drone’s return-to-home safety feature kicked in automatically to bring it quickly back into range.

Despite the Air 2S’s lightweight, compact build, it’s more than capable of holding its own in a breeze. Its GPS and sensor-based stabilisation keep it hovering steadfastly in place like a robotic harrier. It also zips around with surprising speed and nimbleness, landing and taking off quickly; but a switch on the controller allows you to toggle between normal, cinema (slower) and sports (fastest, without safety sensors) flight modes, if you want to modify how it moves in the air.

It’s worth noting that there’s no support here for the DJI Motion Controller or DJI FPV Goggles – yet. From the wording on DJI’s site, that seems likely to be coming by way of a future firmware update.

Each battery can give you up to 31 minutes of flight time, which is excellent. They do take a while to recharge (around 80 minutes from empty to full), so if you’re planning on a long day of aerial shooting then you should stock up on extra batteries.

Finally, a word about the DJI Fly companion app. DJI’s apps haven’t always been the most streamlined or user-friendly, but this one is in a good place UI-wise. Between the controller’s physical buttons and the app’s clear touchscreen controls for the camera, it’s easy to swiftly change camera settings such as video resolution or white balance.

The app also offers a range of generally impressive tracking modes via its FocusTrack feature, which keeps your subject in-frame, and a new MasterShots feature that automatically performs a sequence of dramatic video shots around a tracking point or object with a single tap.

This increased size means larger, more sensitive pixels, which means better dynamic range, colour reproduction and low-light performance. That’s borne out when looking at the videos and stills turned out by the Air 2S – they’re impressive right out of the gate, and can be made even more so if you’re willing to tinker with post-production programs on your computer. See below for a few samples of the images from the Air 2S.

Capture photos in DNG RAW and videos in one of the two 10-bit profiles (Hybrid Log Gamma and D-Log), and you can draw even more detail and depth out of those images.

The camera is mounted on a 3-axis gimbal that keeps it steady and level, with the option to tilt it 90 degrees downwards and up to 24 degrees upwards – although the latter is disabled by default to avoid getting parts of the drone in shot. On that note, I did manage to get the propellers in frame on a few occasions, so do be aware of that when filming.

Some of the video modes apply a noticeable crop to the image, which will likely eliminate the appearance of errant rotor blades, and there’s also a digital zoom available.

The level of zoom you can use depends on the video resolution and quality, so while for 1080/30p you can use an 8x zoom, recording in 4K/30p will reduce the available range to 4x. For 120fps or 10-bit recordings, no zoom is available at all. 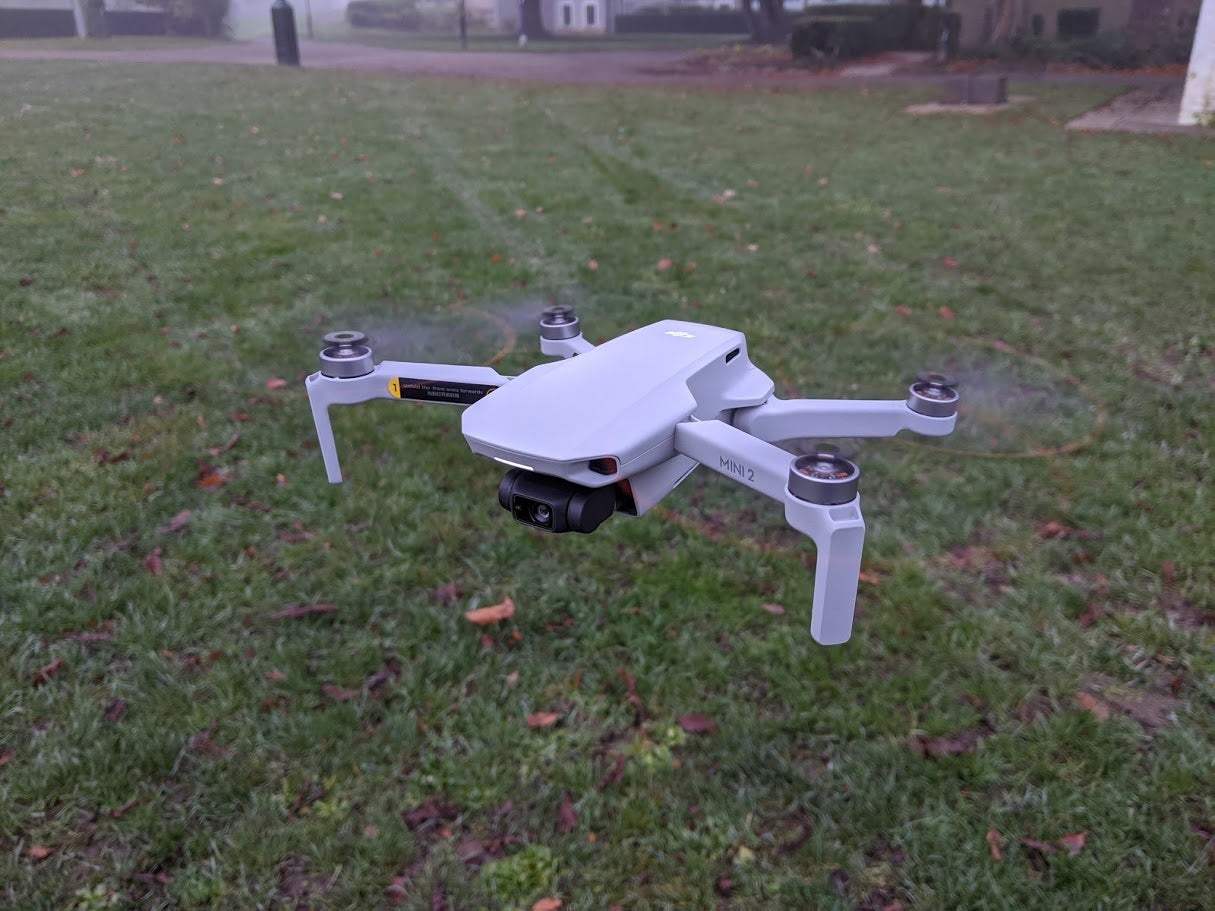 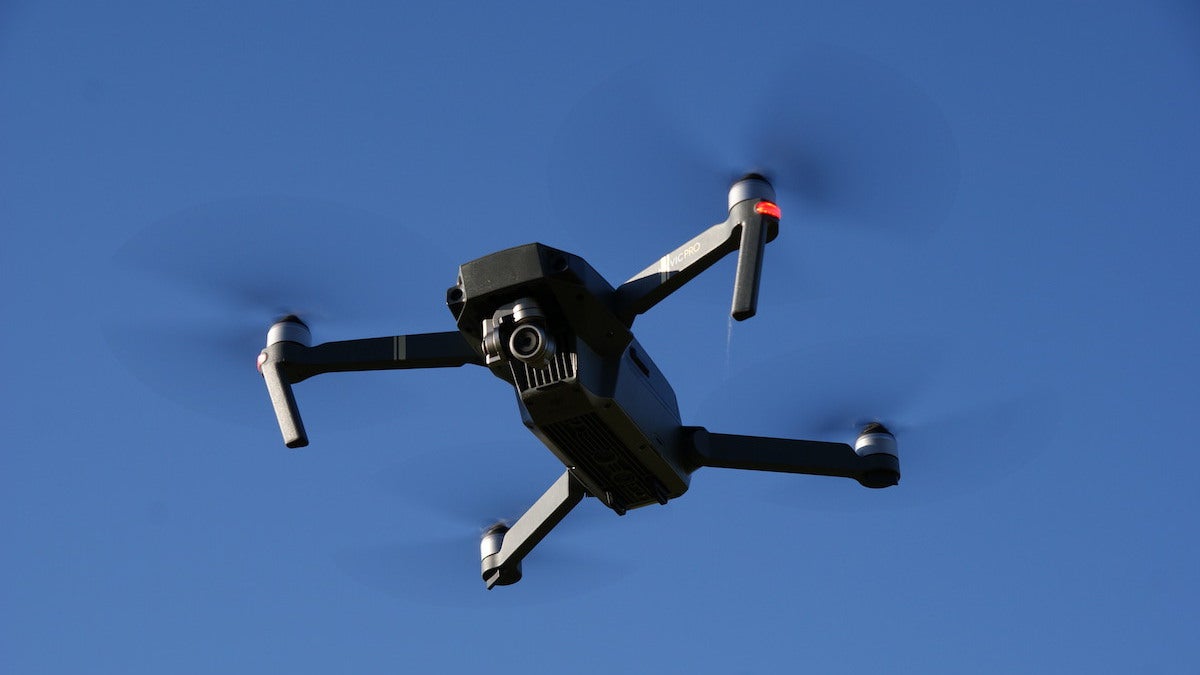 You care about camera quality: While the DJI Mini 2 might be more portable, and the Mavic 2 Pro might offer slightly more on the image front, we think the Air 2S is DJI’s best camera drone pound-for-pound.

You’re a casual drone user: If you can’t justify the outlay, the cheaper Mini or Mini 2 make for cheap and decent alternatives

The user-friendliness, compact size and image quality of the Air 2S make it one of the most appealing drones around, particularly to those who need a camera that can perform in lower light conditions. Offering good battery life, solid build quality, a comfortable controller and a range of clever tracking and auto-shot modes, this is a fantastic package for the price.

Is the DJI Air 2S waterproof?

What app do you use to fly the DJI Air 2S?

The DJI Air 2S can be run using the DJI Fly app, which is available on multiple operating systems, including Android and iOS.

Does the Air 2S work with any other DJI controllers?