Slim and metal-clad is all the rage among high-end laptops these days, and as one of the largest laptop manufacturers in the world, naturally Dell has a range of offerings in this sector. Like its larger Dell XPS 15z sibling, the XPS 14z doesn’t hang with the UltraBook crowd, but is nonetheless slim and packed with features.

It’s more of a MacBook Pro than an Air, and that’s no bad thing, as the extra thickness gets you far more connectivity, more powerful, flexible innards, and an optical drive. It’s also worth noting that Dell has fitted the 14in screen into essentially a 13in form factor while still remaining thinner and lighter than a 13in MacBook Pro. In addition, Dell has even squeezed in discrete graphics. So is it the game-changer it might at first appear?

Just like the 15z, the 14z sports a gorgeous aluminium and magnesium chassis that mimics Apple’s unibody aesthetic. The lid and laptop’s base are single pieces of milled grey aluminium, while the palm area and keyboard surround are a darker magnesium. This doesn’t feel as cold to the touch and is a slightly softer metal, making for a more pleasant typing experience, and also helps to keep the weight down. The only plastic parts are the keyboard keys and screen surround, though the latter is protected by a single glass sheet that gives a seamless display impression.

In fact, this bezel-embracing glass is one of the main areas where the XPS 14z immediately differs from Dell’s larger option. Visually it makes the laptop far more attractive with the subtly integrated HD webcam the only blemish, and the bezel’s outer edge that’s not covered by glass features a soft-touch rubberized finish. The fact that the 14z’s speaker grilles to either side of the keyboard are significantly smaller doesn’t hurt either. Finally the narrower chassis gives the keyboard itself a more pleasing proportion. 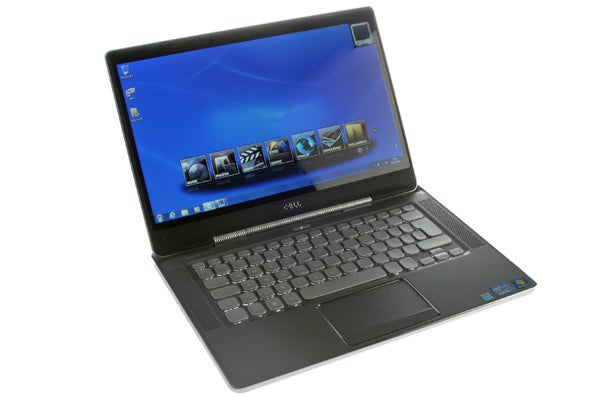 Another pleasant change is that the bezel around the screen is
incredibly narrow too (1cm, to be exact). Dell wasn’t exaggerating when
it claimed to have fitted a 14in screen into a 13in chassis: the screen is
just a millimetre short of 14 inches, and the chassis is only 335mm
wide, compared to 325mm for the
13in MacBook Air and MacBook Pro which sport smaller screens.

Thanks to all that metal and a lot of attention to detail, build quality remains superb, with very solid hinge action and closely fitted panels. In fact, the XPS 14z feels even sturdier than the 15z did, and the keyboard feels better too, putting it easily on a level with the best the market has to offer. Weight, meanwhile, is a very reasonable 1.98kg.

These factors combine to make this an aesthetically superior XPS z. The
only divisive elements remain the ever-so-slightly protruding rear and
the hinge which looks too much like a metal shower hose. But, even if
they’re not your cup of tea, they do little to detract from what is
overall a stunning-looking machine.

While in the design stakes Dell’s smaller 14z wins over its 15in brother, when it comes to connectivity it takes a minor step back. Most of the connections – including all the USB ports – are located around the back, which looks great but makes it slightly awkward to plug in a memory stick or USB dongle, and can easily cause a memory stick to break if you tilt the laptop back while one is plugged in. 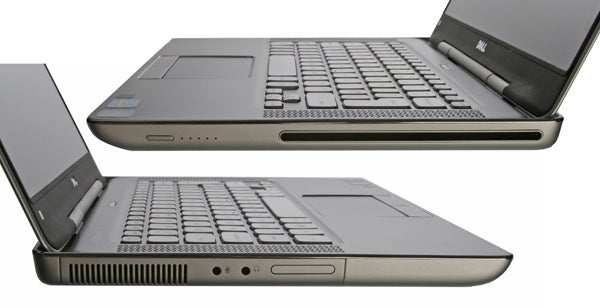 Only the slot-loading DVD writer, SDXC card reader and headphone plus microphone jacks are found on the sides. On the rear you’ll find HDMI 1.4 and mini DisplayPort for video, one port each of USB 2 and USB 3 (set too close together), and a Gigabit Ethernet jack. The 14z loses out on the XPS 15z’s combined USB/eSATA port, which was a great, fast option for those with older external hard drives. At least wireless is also well up to scratch, with both Wi-Fi N and Bluetooth 3.0 available.

Where the XPS 15z started going downhill a little was with its typing experience, as the feedback from its keyboard was too shallow for ideal comfort. Though key size and layout are virtually identical on this XPS 14z, the feedback has been fixed and is now decent to good, though we might still have wished for a more defined click. However, we certainly wouldn’t exclude the 14z for the serious typist, and this is a welcome improvement. The cherry on the cake is that lovely white backlighting we’re seeing on more and more premium laptops these days.

The large multi-touch trackpad is identical to the 15z’s, meaning it’s sensitive and comfortable with crisp buttons. Somehow, the fact that the pad is larger in relation to the laptop also enhances our subjective experience, and overall the smaller XPS z passes our usability tests with flying colours. Yet another nice touch shared with its sibling is the battery indicator, a little button with five white LEDs on the laptop’s side that can be activated even with the lid closed. 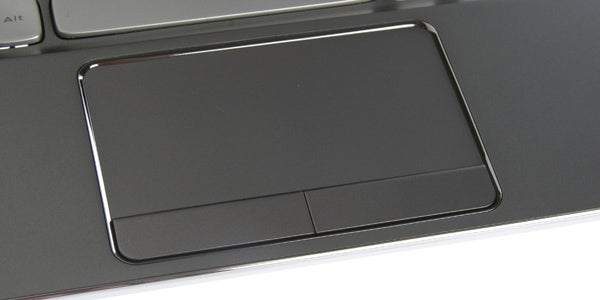 So how about that 14in screen? Alas, it’s no IPS panel and this is no Samsung Series 9 900X3A with its miraculously good TN implementation, so the viewing angle limitations, generally inherent in TN technology, still apply. You’ll have to sit fairly centrally to avoid significant contrast shift, which if nothing else makes watching a movie with a few people a bit of a pain.

The good news is that black levels are decent enough, with only the darkest shade on our greyscale proving too much of a challenge and fairly even backlighting with minimal bleed. The glass layer aids perceived contrast and colour vividness, though it also causes some nasty reflections unless you’re in a darkened environment. Unfortunately, what it all adds up to is still a screen that’s rather average – in contrast to the much stronger example on Dell’s XPS 15z, which also offered that delectable Full HD resolution. 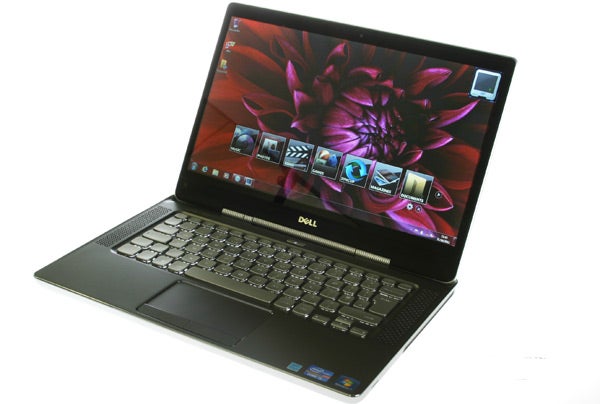 Considering the size of its chassis, the 14z’s audio is a far better proposition. Oddly it doesn’t suffer from as much distortion at maximum volume as its bigger brother, and though it still comes across as harsh with flat bass, that’s easier to forgive on a smaller machine. If you’re not too picky, most entertainment should be fine.

One of the things we love most about Dell is its flexible configurations, and though this is more limited on the Z range, you should still see a processor choice of dual-core Intel ‘Sandy Bridge’ Core i5 to i7, 6 – 8GB of RAM, a 500 – 750GB hard drive running at a speedy 7,200rpm and, on the more expensive models at least, a dedicated Nvidia GeForce GT 520M graphics card.

Our sample sports a Core i5-2430M, which should be plenty of performance for most folk. Daily productivity and even heavier tasks like light video editing will be more than within the reach of this 2.4GHz CPU, which can turbo boost up to 3GHz and supports up to four virtual cores.

The processor is backed by 4GB of RAM and a 500GB drive, which is adequate on both counts. We’re hoping Dell will make SSD options available soon though, which would not only give better performance but would also contribute a little to battery life and keeping weight down.

Graphically, the GT 520M with its 1GB of video RAM is up to less intensive recent games as long as you’re not too demanding on the resolution or detail. For example, running Stalker Call of Pripyat at the screen’s native 1,366 x 768 was barely playable on medium detail, while dropping it down to 1,280 x 720 resulted in a mostly smooth 29fps average.

Best of all, the XPS 14z stays reasonably cool and quiet while under load, unlike the noisy Sony VAIO S and the MacBook Pro 13, which by all accounts also gets rather noisy and hot. Windows Home Premium 64-bit is running the show on the XPS 14z, and Dell’s Stage software provides a handy customisable launch bar somewhat reminiscent of OSX.

Unfortunately, battery life is where the smaller member of the XPS z family has taken its biggest hit. In our low intensity test with screen brightness at 40 percent and wireless radios disabled, it only managed four and a half hours (compared to nearly six for the XPS 15z), which is lower than average for a 13/14in laptop and will decrease further when using the dedicated graphics or Wi-Fi. Also keep in mind that, as the battery is non-removable, you can’t easily replace it when it starts degrading.

When we get to value, the XPS 14z starts at £799, while our edition costs £849, which seems fairly reasonable for what you get. Thanks to its unibody, all-metal design the 14z doesn’t have too many Windows-based rivals. The closest competitor for style would probably be the successor to the
HP Envy 14, which is a larger 14.5in machine with a £1,299 starting price and better specifications.

A more realistic comparison might be the aforementioned VAIO S, which is a slightly lighter and thinner laptop with better battery life and many of the same features including an optical drive with a similar starting price. However, it’s nowhere near as well-built, far noisier, its discrete graphics aren’t as powerful and you do lose nearly an inch of screen space. 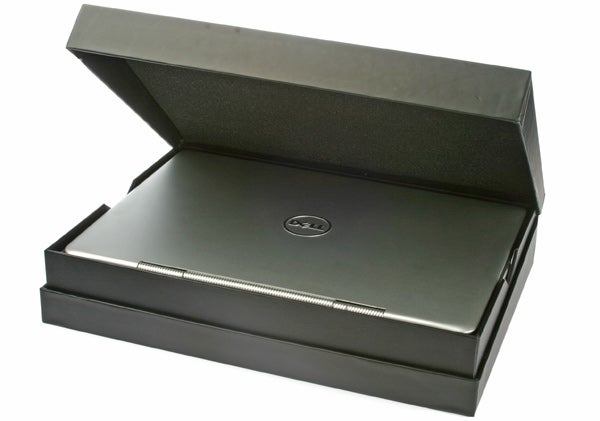 Finally of course there’s the 13in version of the MacBook Pro. This starts at around £930 online, with that spec comparable to our £850 XPS – only the Pro doesn’t offer discrete graphics, which is a very important consideration if you’re planning on doing any gaming or using graphics accelerated applications. Aside from the obvious differences in style and the Dell being a little thinner and lighter, there’s also the USB 3 (on the 14z) versus Thunderbolt (on the Pro) debate, where Thunderbolt definitely offers greater future versatility but currently USB 3 is the better supported option by far. The Dell offers a larger screen, but that of the MacBook is better quality. Last but not least, it’s worth noting that you can hook the Dell directly up to 3D TVs without adapters thanks to its full-size HDMI 1.4 port.

Beautifully built and offering good usability, the all-metal, milled-aluminium XPS 14z gives you style and power in a relatively compact package, including enough grunt for light gaming. One of its standout features is that it manages to fit a 14in screen into the equivalent of a 13in chassis, but unfortunately the screen itself is distinctly average. This, combined with awkward rear-only connections and mediocre battery life, mean it’s worth considering for its strengths but not an automatic must-buy.