As the name suggests, the MacBook Pro is a serious laptop for serious people. The combination of Apple’s superb industrial design combined with the latest and greatest components available makes the latest MacBook Pro an invitingly stylish and powerful portable workstation. So where the MacBook Air could fairly be described as an expensive indulgence, the MacBook Pro should prove merely expensive. 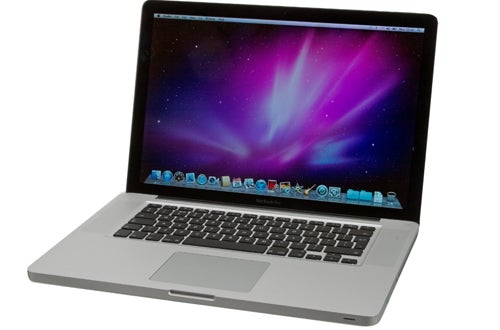 Anyone hoping for major changes to the construction of the MacBook Pro this generation will be disappointed. As fans of the solidly built unibody chassis, however, we’re pleased to see its persistence. The MacBook Pro feels simply sumptuous, and the metal body not only inspires confidence in the build quality, but also goes a long way to justifying the price.


We particularly like the backlit keyboard (and still lament its removal from the MacBook Air) which, as well as being easy to see, also offers a crisp response and makes typing a real pleasure. Like the keyboard, the trackpad is also exactly the same as on previous MacBook Pros, and again this is no bad thing. Other laptop manufacturers have done their best to integrate multi-touch into their products, but Apple definitely still has them all beat. 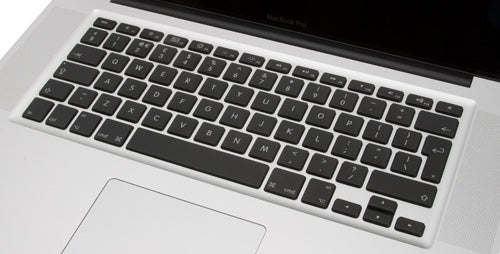 Primarily this is a result of the tight integration between the trackpad and OS X, with pinch to zoom, two finger scrolling, and a huge number of other multi-finger gestures working as well in third party programs as they do in Apple’s own applications. We’re particularly fond of the three finger ‘forward’ and ‘back’ gesture in both Finder and our choice of web browser.


At 364mm x 249mm x 24.1mm in size, and weighing 2.54kg the 15in MacBook Pro isn’t a laptop you’d want actually sitting on your lap very often, but it isn’t so heavy that you’d be unhappy taking it to and from work every day, or carrying into a meeting room occasionally. It’s certainly not a frequent flyers best friend, though. The power adaptor is light enough not to cause concern, and we definitely approve of its modular design, with either a plug built into the adapter or a long cable available.

An addition we’re not particularly enthralled with, but which might be of interest to some buyers is the new FaceTime HD camera. As the name suggests, this constitutes a 720p sensor, in the same place as every previous MacBook Pro had its standard definition one. A small mercy is that new MacBook Pros come with FaceTime installed, saving you the £0.99 cost owners of older Macs are subject to. Suffice to say that this works, and looks good, but that we’re not inclined to use it.

Along with the same compliments, the new MacBook Pro’s design also suffers the same criticisms as its predecessors. The placement of just the DVD drive and Kensington lock port on the right, with every other connector on the left isn’t the best use of available space. Moreover, the MacBook Pro’s provision of only two USB 2.0 ports remains stingy, even taking into account the presence of a FireWire 800 port not often seen on non-Apple laptops. A MagSafe power port, Gigabit Ethernet Port and SDXC card slot are also provided on the MacBook Pros left edge along with separate audio line-in and line-out jacks (the 13in model has a combined port, making it less than ideal for audio editing work).

The star of the show on the input front is found where the previous MacBook Pro’s mini-DisplayPort sat. The connector is the same, but it’s now a Thunderbolt port, Intel’s latest device interface that offers up to 10Gb/s transfer speeds bi-directionally – in addition to functioning as a DisplayPort. Up to six devices can be daisy chained off a single Thunderbolt port, one of which can be a monitor. Currently the display has to be the last device in the loop, but future monitors will be able to sit anywhere in the chain. 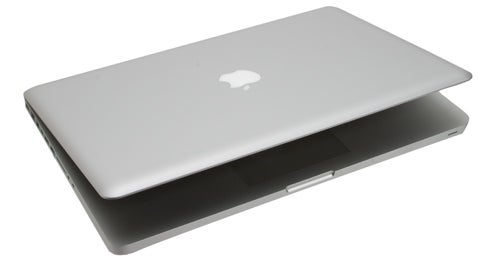 The biggest problem with Thunderbolt currently is that there are no devices on the market able to make use of it. A number of manufacturers have prototypes, though, including Promise, which has a 6-bay external hard drive in testing. At a demonstration at Apple’s London HQ this unit was able to deliver a raw throughput of close to 800MB/s, and the MacBook Pro connected to it had no problem streaming four raw 130MB/s video feeds from the storage device and outputting them to a Cinema Display daisy chained off the Promise unit.

It’s also worth noting that despite the criticisms that Apple has opted for Thunderbolt over USB 3.0 – a technology for which compatible devices are available now – it’s not entirely untrue to say the MacBook Pro doesn’t support anything but Thunderbolt. Internally the Thunderbolt port offers up a PCIe bus, so in theory an adaptor could be made to provide a USB 3.0 connection via the Thunderbolt port. Obviously using an adaptor isn’t the most elegant solution, but it’s better than having no solution at all. Apple being Apple, however, we’re not likely to see an official adaptor any time soon.


The physical construction may not have changed much, but internally the latest MacBook Pro is a much-improved affair. Foremost on the list of upgrades come Intel’s new Sandy Bridge CPUs. In the 13in system these are limited to dual-core variants, but in the 15in and 17in MacBook Pros it’s quad-core all the way. The MacBook Pro actually is the second laptop we’ve managed to get our hands on featuring Intel’s new line of Core i5 and i7 processors. However, unlike the MSI GT680, the MacBoo Pro isn’t a gaming system, and so while the basics aren’t much different, they are in a system with more universal appeal. Our sample system featured a 2.2GHz, quad-core Core i7. Thanks to an updated version of Intel’s Turbo Boost technology, this processor can run at up to 3.3GHz when a higher clock speed is more useful than having multiple cores active.

Intel’s latest Core series CPUs feature an integrated Intel HD 3000 graphics chip. This isn’t up to more than the most casual gaming, but it does cater for GPU-accelerated video encoding and decoding (with compatible software) and has a low power draw, helping the MacBook Pros achieve their clamed 7-hour battery life. The 13in MacBook Pro is limited to just integrated graphics, but stepping up to the 15in Pro adds a dedicated AMD Radeon HD 6490 with 256MB of GDDR3 memory. As our Xbench results show, Apple isn’t kidding when it says these combine to give the new MacBook Pro a notable performance advantage over its predecessor. 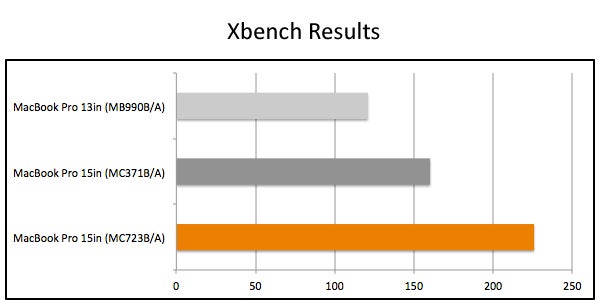 The MacBook Pro is able to switch between its Radeon and the Intel graphics on the fly, giving both power saving and performance when each is needed. A further upgrade to the 15in MacBook Pro upgrades the dedicated chip to an AMD HD Radeon 6750, packing a generous 1GB of GDDR3 RAM; the same chip that is standard in the 17in MacBook Pro. Our test system was configured with the latter GPU, which proved perfectly capable of handling modern games, giving good, steady frame rates in games such as Star Craft 2 and Eve Online, with sensible graphics options configured. Considering how loud the fans get when running a game, however, we’d not want to use the MacBook Pro for this task very often. 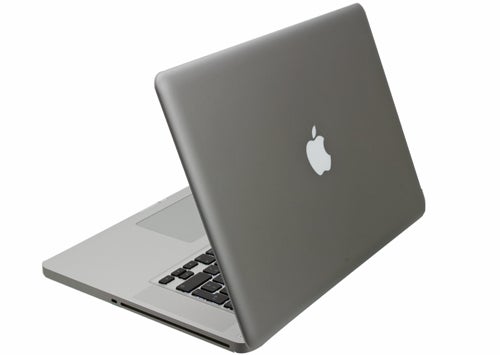 An area where the MacBook Pro arguably lags behind its competition is the display, which is almost a required upgrade option. The standard 1,440 x 900 pixel resolution is fine but certainly not class leading, and we’d be inclined to stump up the £80 needed to get a 1,680 x 1,050 pixel resolution upgrade. The other potentialy major problem is the glossy coating, which proved very annoying – touch typists will find themselves staring into their own eyes a lot. This can also be rectified via an upgrade but this time it’ll set you back a massive £120 for the 1,680 x 1,050 anti-glare display. When it comes to colours and viewing angles, the standard 1,440 model holds up well with a bright, punchy and easy to view display. 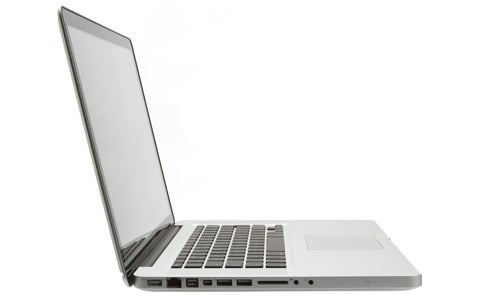 On the plus side, the screen is the only aspect of the MacBook Pro you might feel the need to upgrade. Even the starter 15in model is very well equipped and should serve you fine. We happen to have reviewed the 2.2GHz version, which holds less appeal due to its higher starting price but it certainly packs a lot in. The Core i7 processor is coupled with 4GB of RAM and either a 750GB 5400rpm hard drive (500GB in the 2.0GHz model). There’s a zero cost option to switch this for a 500GB 7200rpm drive, if performance is more important to you than capacity, and a range of SSD options is available if you’re feeling particularly flush. Maintaining its reputation for extortionate upgrades, Apple charges £160 for 8GB of RAM and a massive £200 to swap out the standard 2.2GHz CPU for a 2.3GHz unit; unsurprisingly we’d advise against considering the latter at all, and recommend you perform RAM upgrades yourself.


If you can afford the admittedly high asking price, the MacBook Pro has a lot to offer. In terms of hardware, it’s on par with any equivalent PC based laptop and adds in its own unique feature in the shape of ThunderBolt. The key point, though, is that still nothing else comes close to its beautifully designed and constructed chassis.