If you want a powerful, premium laptop that’s not a Macbook Pro 15in, HP’s Envy line is an interesting alternative, generally
offering sharp styling, high-end build materials, excellent ergonomics and loads of
features. After checking out the 17in 3D model (the aptly named HP Envy 17 3D), we now thought we’d take a look at the smaller and lighter Envy
14, which as its name suggests is a 14.5in powerhouse. However, this isn’t the
‘regular’ 14-1190e with its silver aluminium finish, but rather the 14-1195ea
‘Beats’ Edition. 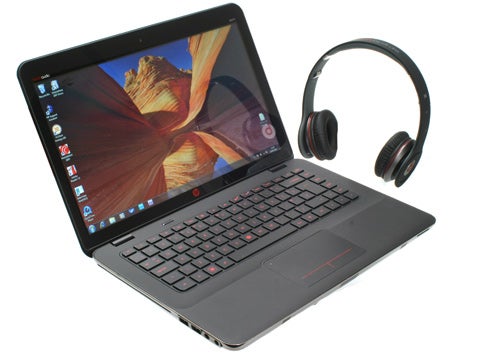 Paired with a set of Monster Beats Solo headphones certified by Dr. Dre, the 1195ea comes in a sexy
combination of red and black to match. The lid is now a matt black affair with
the HP logo attractively highlighted in glossy black, though the massive red
‘b’ (for ‘Beats’) is a bit overbearing and could have done with being either
more subtle or backlit. Fingerprints are also a bit of an issue, but not nearly
as much as they would have been with a glossy black plastic finish.

Opening the laptop up, its insides are even more attractive.
Along with Apple, HP realizes the value of minimalism, and very little breaks
the 1195ea’s sleek black lines. The screen is of the ‘borderless’ variety,
meaning a single sheet of glass across the screen and bezel makes it appear
seamless – though it also ups the reflections to frankly distracting levels. 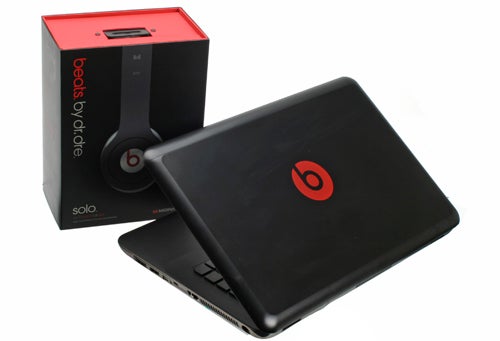 Thankfully, unlike with the Samsung Series 9, HP’s finish is more consistent, and the entire keyboard
surround is a single piece. It sports a lovely soft-touch finish (similar to
the feel of the lid on Lenovos such as the ThinkPad X220t) that makes it a delight to rest your palms on yet doesn’t
suffer too much from grease marks or fingerprints.

Adding further to the laptop’s appeal is a band of gunmetal
trim surrounding the ports. Even the power adapter is sleek and curved, allows
you to detach its cables at both ends, and offers a USB port for charging your
devices without needing the laptop. These features make it our favourite power
adapter on a laptop yet, and we hope other manufacturers will take note. 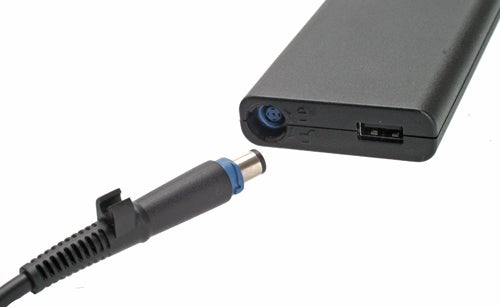 Also on hand to increase the 14-1195ea’s premium feel is a felt
cloth slipcase, which is a far more useful addition than the cardboard carrying
bag for the Samsung 900X3A, and in another nice touch the manual is found on an
Envy-branded SD card!

Of course, the star addition to the show is those Monster Beats
Solo headphones, which are worth around £150 on their own. That’s quite a value-add,
but then we are talking about a laptop that costs over £1,000. If you want the
full low-down, go and have a read of our review. Otherwise, here’s a quick summary. 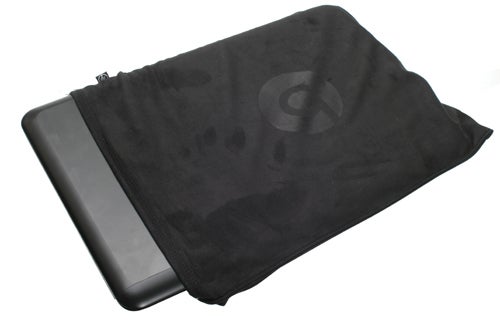 Sporting a matt black, almost soft outer finish and grey
headband padding with leatherette on-ear cups, the Beats Solo look and feel just as
premium as the laptop. Build quality is excellent, with an adjustable metal
inner frame and metal hinges that allow the phones to fold flat for transport.

There’s an extensive range of accessories too, including a
thickly padded carrying pouch, cleaning cloth, and two thick red cables (one
plain, the other with a ‘control centre’ offering volume controls, a
call-answer button and microphone). 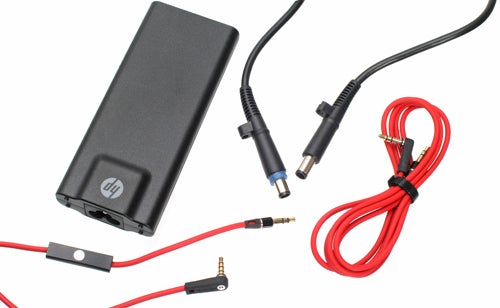 Unfortunately the headphones’ sound quality doesn’t live up
to their build and presentation, as they are so bass heavy as to almost completely ruin the vast majority of the music we used to test them with.

Connectivity on the Envy 14 Beats Edition is good, if
slightly out-dated – which is forgivable considering this laptop has been out a
while. Along the left you get two USB 2.0 ports and headphone plus microphone
sockets, the front houses an IR sensor and SDHC/MMC memory card reader, while
on the right side you’ll find white power and HDD activity LEDs, a USB
2.0/eSATA combo port and Gigabit Ethernet jack, HDMI [i]and[/i] mini
DisplayPort (a great addition for outputting to high-resolution monitors like
the Apple Cinema Display).

There’s no USB 3.0, but even now eSATA devices are still
more common, so fast external storage is adequately catered for. Naturally both
Wi-Fi N and Bluetooth are on hand to deal with the wireless side of things. Our
one major disappointment is the Envy 14-1195ea’s lack of a Blu-ray drive.
Instead, you only get a DVD-Rewriter, which is rather stingy considering this
machine will set you back £1,100.

Further specifications are adequately impressive. The Core
i7 might not be Sandy
Bridge (as found in the Samsung Series 9 900X3A and MSI GT680), but we’re still talking about a previous generation top-end,
quad-core Intel CPU. Though its standard clock speed is ‘only’ 1.6GHz, it can
Turbo-clock up to 2.8GHz on a single core with lightly threaded workloads. It’s
backed by 4GB of DDR3 RAM and a fairly generous 500GB hard drive that runs at a
speedy 7,200rpm.

Graphics are competently handled by a discrete Mobility
Radeon 5650 sporting 1GB of dedicated memory. While we certainly wouldn’t go so
far as to call this solution in any way gaming-worthy, it’s up to handling
casual and older titles at the screen’s relatively low 1,366 x 768 resolution. In
Stalker: Call of Pripyat, the Envy managed a perfectly playable 33.8 frames per
second average, though this was in DirectX10 mode and with details set to
medium.

The major disadvantage to this kind of hardware in a
relatively slim chassis is that – though virtually silent when during light use
– the laptop gets quite loud under load, with its fan whirr being distinctly
audible.

On the ergonomics front, the Envy 14 Beats Edition holds up
reasonably well and the keyboard is mostly a pleasure to use. The soft-touch
palm-rests ensure your hands rest very comfortably. Feedback is just a hair
away from being too shallow, yet the large matte keys nevertheless offer a
positive click and are well-spaced. Layout is spot-on too, though experienced
users may dislike the F-Function keys being secondary to their multimedia functions. Still, this is fast
becoming the norm and can be changed in the BIOS.

One of the keyboard’s nicest features is that it’s backlit
in red. Not only does this allow you to type in the dark, it adds a serious
wow-factor to the laptop’s aesthetics in an adequately dark environment.
Unfortunately, there’s no automatic brightness sensor and the LED intensity
isn’t adjustable as on the Samsung Series 9, but it is perfectly even.

The touchpad is positioned centrally, so the palm of your
right hand may inadvertently move the cursor on occasion when typing.
Thankfully, HP has the best touchpad-deactivation system on the market: simply
double-tap twice on the top left hand corner of the pad to enable or disable
it.

HP has opted for the same ClickPad as on the Envy 17 3D, meaning it integrates its buttons into the pad’s touch surface.
This leaves a responsive, large surface to work with while the ‘buttons’ offer
a positive click and don’t suffer from a large dead zone. However, there are
still rare instances where the pad mistakes a button-press for a cursor
movement, and overall HP’s all-in-one touchpad solution isn’t a patch on that
found in the Samsung Series 9.

For those occasions where you don’t want to use the Envy 14-1195ea’s
included Monster Beats Solo headphones, this Envy’s speakers have also been given the
Dr Dre treatment – though we suspect this is just some additional processing
thrown in with the same speakers as the regular edition Envy. 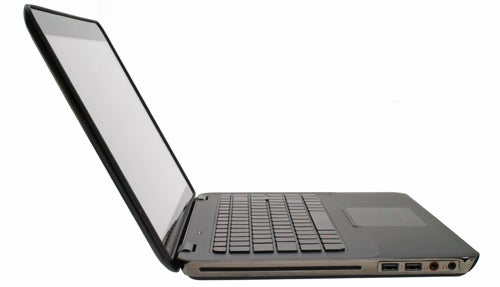 As expected, the audio these stereo efforts provide is good,
but it’s not great. They manage to pump out plenty of volume without
distorting, and produce a high and mid-range with good clarity and detail.
Surprisingly though – especially given the Beats Solo bass prejudice – they’re
not great on the low end. In fact, they sound a tad tinny, robbing explosive
entertainment of much of its impact. This is only partially compensated by the
Beats processing, and even an aurally inferior laptop like the Dell XPS 15 isn’t far behind in terms of audio performance. 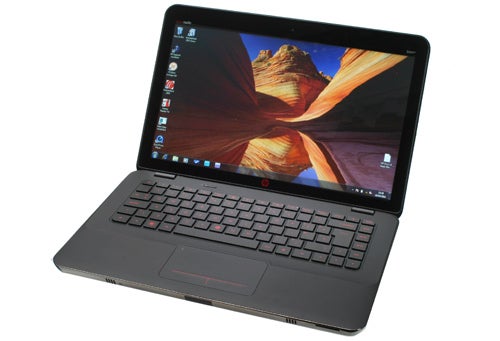 However, aside from the poor vertical viewing angles
that are almost inevitable with a TN-based screen (the Samsung Series 9‘s awesome display being a notable exception), we have few
complaints. Horizontal viewing angles, for example, display very little
contrast or colour shift. Of course the glossy screen finish causes distracting
reflections with any kind of ambient light present, but it also lends a little
extra brightness to already punchy colours.

This is helped by excellent contrast at the dark end of the
scale, allowing you to see every last detail in gloomy games and movies. Nor is
there any clouding or backlight bleed to mar its performance. Finally,
sharpness is excellent with little sign of banding or other artefacts.

Unsurprisingly, considering its powerful components and lack
of graphics switching, battery life is not great. Its rather stingy 3,760mAh
battery only managed to power the 14in laptop for three hours and 40 minutes in
our semi-intensive Productivity test. It did far less well in MobileMark’s DVD
test with screen brightness at 100 percent, dying at just short of two hours. 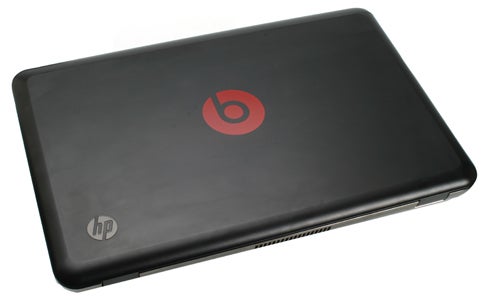 However, it’s on
value that the 14-1195ea really falls down. At £1,100, there really is no
compelling argument for this machine. Quite simply, it’s
terrible value, even if you think the headphones are worth around £150. Compared,
for example, to a Dell XPS 15 for that kind of money, it would give you a
faster and more efficient Sandy Bridge CPU, better graphics, an SSD, more
memory, an HD webcam and superior connectivity.

Though it’s undeniably a stylish and attractive machine
which has plenty of power even for a fairly intense workload, the HP Envy 14
14-1195ea Beats Edition doesn’t excel enough in any area to justify its
ridiculously high price, and the inclusion of the sub-par Beats Solo headphones
doesn’t help.