If you like ultra-slim, aluminium laptops and are looking for something with a little more screen real estate than your average ultraportable, Dell’s new XPS 15z might well be the one for you. With highlights like a anodised aluminium outer unibody shell, magnesium palm rests, optional Full HD screen and Core i7 under the hood, this is one impressive candidate – yet it’s still less than an inch thick!

Dell claims its latest baby is one of the thinnest laptops 15.4in laptops in the world, and with the exception of the 15in MacBook Pro, we don’t know of one that’s thinner – certainly not one sporting heavy-duty specifications and an all-metal chassis. Considering these factors, the 15z is quite light, at a mere 2.54kg.

It looks very stylish, as the company has kept its lines clean and simple, with no patterns a la the HP tm2 to distract the eye. As with the older Dell XPS 15, the base protrudes a little at the rear. Like the hinge (which looks somewhat like a piece of metal shower hose) it will probably divide opinions, but we like the effect.

For the inner keyboard surround and bezel, Dell has used gunmetal grey magnesium. It’s a slightly softer and warmer metal than aluminium, which makes typing more pleasant. The two materials are separated by chrome trim which runs around the edge. Overall, with its white backlighting, minimalist aesthetics and subtle ports, this is one attractive laptop. 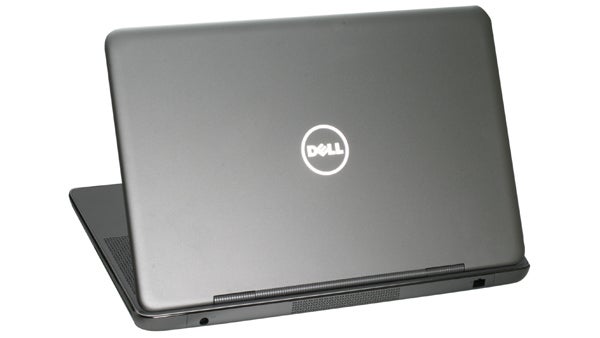 In line with the rugged, premium materials used and the milled outer chassis, build quality is superb. Nowhere was there any sign of poor design or construction, and as far as feel goes, you’re certainly getting you money’s worth, with faultless solidity throughout. It’s also worth noting that the only part that suffers from fingerprints is the screen.

In general use the 15z stayed really quiet, though its fans make quite a racket when it’s under heavy load. At its worst it’s significantly noisier than, for example, Dell’s XPS 15, but we guess that’s the price of thinness in this case. 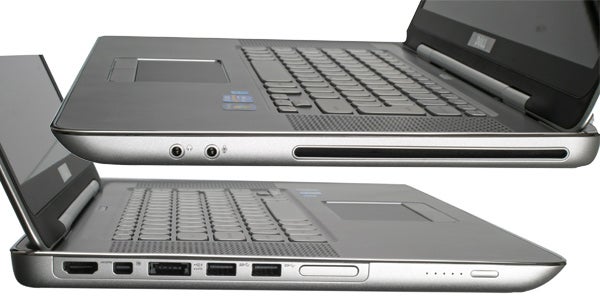 Like its design, connectivity is another area where the 15z excels. For video we have both mini DisplayPort and HDMI 1.4, the latter of which will allow you to output 3D to a compatible external display. Here you’ll also find a combined USB2/eSATA port, twin USB 3.0 ports, and an SDHC/XC card slot. Again somewhat reminiscent of Apple, there’s also a button that activates a classy battery indicator, which shows how much charge is left using five white LEDs.

At the back we have a lone Gigabit Ethernet port, while wireless duties are handled by Bluetooth 3 and Wi-Fi N. The laptop’s right side houses headphone and microphone jacks, and the attractive slot-loading DVD rewriter. Unfortunately, Dell also appears to follow Apple’s lead in not offering a Blu-ray drive, which is even more confounding when you consider that the XPS 15z gives you a Full HD screen and discrete graphics. We just hope this will soon be an option on this model.

Usability is the first area where the XPS 15z hits a minor road-bump. Its chiclet keyboard is one of the few parts of the laptop that’s not metal, though the keys have been painted an attractive silver shade to match the anodised aluminium shell. We’re glad Dell hasn’t included extra buttons other than the white-backlit power button, and this you’ll find all the shortcuts on the top layer of keys, including one for ejecting a disc from the optical drive.

However, despite a good layout, keys feel just a little too small, especially the ones on the far right. This makes it easy to hit the wrong one when, for example, typing an apostrophe. More pressingly, though each key offers a positive click, they’re just a tad too shallow for ideal comfort. Once you’re used to it, working up a fast typing speed shouldn’t be too much of a challenge, but it’s just that slim models like the Lenovo X1 have shown us how good laptop keyboards can be.

Thankfully we have no complaints of the touchpad. It’s large, smooth and sensitive, clearly defined and doesn’t interfere with typing. Admittedly it’s not quite on a level with the frosted glass offering on the Samsung Series 9, but it’s comfortable and works well. The pad’s individual buttons are likewise a pleasure to use, offering a crisp, easy click.

Moving onto the 15.4in screen, the XPS 15z is available in three different configurations, the cheapest of which offers a 1,366 x 768 panel, while the other two bump the resolution up to a whopping 1,920 x 1,080 (also known as Full HD). This is the highest resolution that can generally be found on laptops this size, and it’s great to work with, but it does add £100 to the price.

Our sample came with the Full HD display so we can’t comment on the quality of the lesser option, but we can tell you the one we have is nearly as impressive as the chassis it’s nestled in. While viewing angles don’t match up to the IPS screen on the Lenovo ThinkPad X220 or the unusually superb TN in the Samsung Series 9, they’re the next best thing. Horizontally they’re almost flawless, while vertically they only become unwatchable from below. 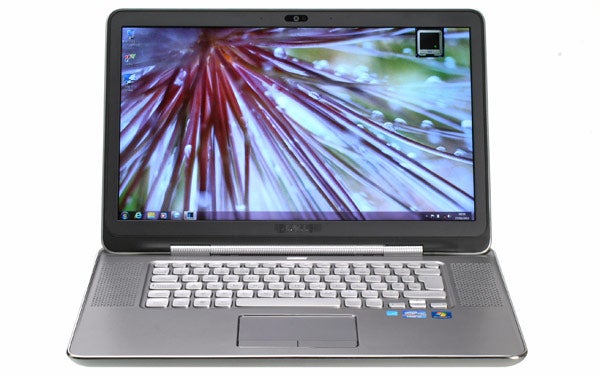 Contrast is decent though not perfect, with the screen unable to distinguish the two darkest or lightest shades of the greyscale. However, this is compensated for by deep blacks, even backlighting and not a hint of light bleed. Furthermore there is little sign of unwanted artefacts such as dithering or banding. Sharpness is also excellent, helped by the fine dot pitch that cramming a 1,920 x 1,080 resolution into a panel this size gives you.

On the audio front, meanwhile, we’re a little disappointed. The XPS 15z’s speakers face upwards through the generous grills to either side of the keyboard and give reasonably roomy sound at a decent level of volume, but mild distortion and an overly harsh delivery that’s lacking in bass mean you’re better served using external solutions.

We received the top-end XPS 15z, which rocks on with a Core i7 processor, 8GB of RAM, a 2GB Nvidia GeForce GT 525M, and a 750GB, 7,200rpm hard drive. To be honest, we think that for the vast majority of users this configuration will be overkill, though if you have the £200 extra to spare, it’s not bad value for upgrading from a Core i5 CPU, 4GB of RAM and a 500GB HDD – especially considering it also doubles the memory on the GeForce graphics card.

As you can see from the results graph, our sample spec of the XPS 15z will easily cope with almost any task. It’s not quite as fast as a laptop sporting an SSD and, unfortunately, Dell doesn’t offer one as an option (with the unibody chassis making it almost impossible to upgrade to one yourself), but otherwise its powerful CPU and GPU, generous RAM and speedy hard drive make for a potent combination.

As with all Nvidia GPUs, the GT 525M supports Optimus graphics switching. This means that the 15z will use Intel’s power-frugal integrated HD 3000 graphics where possible, and when the workload kicks up a notch with demanding 3D gaming or GPU-accelerated applications, the GT 525M card will come into play. It offers a moderate amount of gaming potential, managing 44.3 frames per second (fps) in Stalker at 720p and Medium Detail, though this fell to a barely playable 24.8fps at the screen’s native 1,920 x 1080 resolution. Still, undemanding titles at moderate settings are a definite possibility.

Battery life is decent, which is good news considering you can’t replace it with a spare when it runs out. In our non-intensive Productivity test, with screen brightness at 40 percent, it managed just a few minutes short of six hours – though this will decrease when using the dedicated graphics and/or wireless radios.

So the remaining question is whether the XPS 15z is worth your hard-earned cash. We would definitely recommend going for the Full HD screen, which means coughing up for the £999 configuration. On the other hand, if you do want a little more power and future-proofing, the £1,199 is very reasonable for the extras you get. 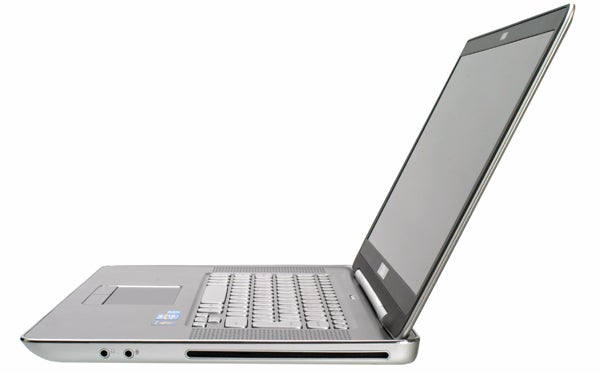 This configuration also compares very favourably with its nearest rival, the Apple MacBook Pro: you get a faster CPU, double the RAM, a larger, faster hard drive, more powerful graphics with better 3D support, a far higher resolution screen, and more versatile connectivity, all for £350 less! Of course the Mac still has the benefits of its more cohesive, slimmer overall design, the comfort of its keyboard, and better speakers, but that’s simply not enough to give it the edge.

With PC rivals the 15z doesn’t fare quite as well, though the premium it demands is justified to an extent by its premium construction, and its Full HD screen is still an asset few rivals can match. On the other hand, the lack of a Blu-ray drive option really hurts it here. 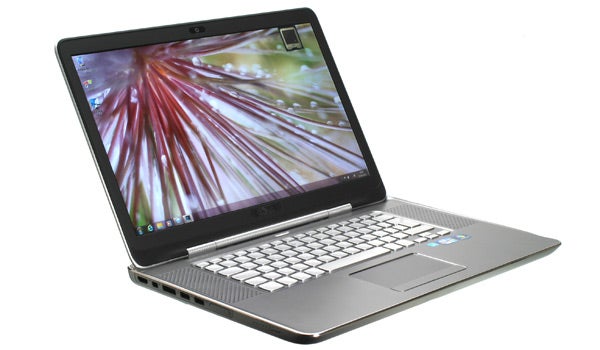 The Dell XPS 15z is the MacBook Pro of the Windows world, with a streamlined aluminium and magnesium chassis, good 1,920 x 1,080 screen, backlit chiclet keyboard and plenty of power under the hood despite being less than an inch thick. Unfortunately it gets rather audible under load, its keyboard and speakers aren’t the best, and the absence of a Blu-ray drive holds it back from being an all-round entertainment centre, but if you’re happy with a DVD rewriter and are after a chic yet competent machine, this is definitely one to consider.