It’s tempting to assume that gaming gear is always expensive, but panels such as the Dell S2721HGF disprove that common notion with a temptingly low price.

For that money, Dell says that the S2721HGF will deliver solid mainstream quality. With the display pairing its 27in diagonal with a 1080p resolution and a 144Hz refresh rate, it appears to tick the boxes – at least on paper.

Low prices create compromise, though, so I’m intrigued to see if the Dell is a bargain or an affordable mistake.

In the Dell S2721HGF, Dell has spent much of the budget on the panel, which makes sense when you’re building an affordable gaming display – after all, the gaming experience has to take priority.

The 27in display uses VA technology that should deliver more contrast than the average IPS screen, and it has a resolution of 1920 x 1080. The Dell has a refresh rate of 144Hz, and it’s compatible with both AMD FreeSync and Nvidia G-Sync.

Positively, the 1080p resolution is high enough to ensure games look decent, but it isn’t so high that affordable graphics cards will struggle. Almost any modern AMD or Nvidia card will be able to handle this screen, especially if you’re willing to tweak the graphics settings. It’s also a decent resolution for playing eSports titles, because their higher frame rates are more taxing on PC hardware.

Negatively, though, stretching a 1080p resolution across a 27in display delivers a density level of 82ppi. That’s low, and it means that the Dell isn’t particularly sharp. It won’t hinder mainstream gaming, but the image here is noticeably less crisp than other displays; it’s easy to see the pixels.

As mentioned, the 144Hz refresh rate is ideal for mainstream gaming and eSports, but if you’re serious about competitive gaming then you’ll have to spend more on a 240Hz panel. Elsewhere, the Dell offers a 4ms response time and 8-bit colour, which are solid figures. The S2721HGF also has a 1500R curve; it’s subtle, but it does make this panel a little more absorbing.

The necessarily plain exterior is primarily made from plastic, and build quality is mediocre – there’s a little movement in the rear, and the monitor wobbles when touched. You won’t find much decoration, apart from the plastic slates at the rear. The Dell is at least easy to build; plus, it weighs only 6.8kg and features very slim bezels, so it’s ideal if you want to create a relatively affordable multi-monitor setup.

Adjustability is minimal. The S2721HGF offers 100mm of height adjustment, 26 degrees of tilt and 100mm VESA support; there’s no swivelling nor portrait mode. Movement-wise, this monitor is stiff; it’s hard to move the display vertically without applying lots of force.

The stand comes with a hole for cable-routing, and around the rear you’ll find two HDMI ports and a DisplayPort connector. The OSD is managed by a joystick and a quartet of buttons. They work fine: the controls are snappy, and the menu is well organised, if a little visually underwhelming. The Dell has no USB ports and no speakers.

Not surprisingly, USB ports, RGB LEDs, or other features, will cost more. As with an increase in resolution, expect to pay at least £250 / $259 / €250 for a monitor with greater features, and watch the price increase as you add more capability to the display.

Dell’s decision to use VA technology in this display results in fantastic contrast. I used a colorimeter to measure the The S2721HGF’s out-of-the-box performance, and the Dell delivered a brightness level of 251 nits and a fantastic black point of 0.08 nits.

Those figures create a contrast ratio of 3138:1, which is a brilliant figure with impressive real-world implications. It ensures that games have plenty of punch and that colours are always bold. Its darker areas have more depth and nuance than any IPS display. The superb contrast was maintained at lower brightness levels, too. Dark areas look genuinely black on this screen – on some IPS displays with poorer contrast, they can look grey.

I turned away from contrast, towards colour, and the Dell became a little more mediocre – no surprise for an affordable VA screen.

The Dell’s Delta E of 2.16 is decent but not outstanding, and the same can be said for its colour temperature of 6359K – together they present colours that are good enough for mainstream gaming, but pricier panels will be more accurate.

Dell’s display rendered 90.8% of the sRGB colour gamut, which is another middling result. It means that the Dell will produce most of the shades required by games, but not all – you miss out on 10% of the more extreme shades in the gamut. That’s another thing that you just won’t notice when you’re gaming on a day-to-day basis, but spending more cash will certainly get that figure closer to 100%.

My additional tests revealed that there are some other areas where the Dell continues to be merely average. Its backlight power declined by 15% in the bottom-left corner and by 21% in the bottom-right corner, which are high figures for a 27in display.

I also noticed some backlight bleed along the bottom edge. You’re only going to notice these issues in darker, more static scenes, but it’s still worth bearing in mind. Not surprisingly, this screen doesn’t have the capability for handling HDR content: it isn’t bright enough, and it can’t render enough of the DCI-P3 gamut.

The specialist colour modes aren’t particularly good, either. The best option is the RPG mode, but that’s because it keeps the image virtually unchanged from the default. The MOBA, RTS and Sports modes all reduce the Delta E, so colours lose accuracy. The FPS option also adds an uncomfortable pixilation to text, presumably to sharpen the screen – but it’s distracting and unnecessary.

The affordable Dell S2721HGF monitor concentrates on the core gaming experience and it performs reasonably well. Its huge contrast ratio and deep black point means games offer plenty of depth and punch, and the colour figures are good enough to render mainstream titles with a suitable accuracy. The refresh rate delivers smooth gameplay, too.

Of course, the budget does bite in some areas. The Dell offers mediocre adjustment, underwhelming looks, and hardly any extra features, and its 1080p resolution is the bare minimum for gaming – a 1440p panel would look crisper. Addressing these issues would result in a better experience, but the price will rise accordingly as seen with the likes of the Samsung Odyssey G7.

Is it one of the best gaming monitors you can buy? No, but it has the quality and specification to tackle any mainstream gaming task alongside a low price, and that makes it a winner. 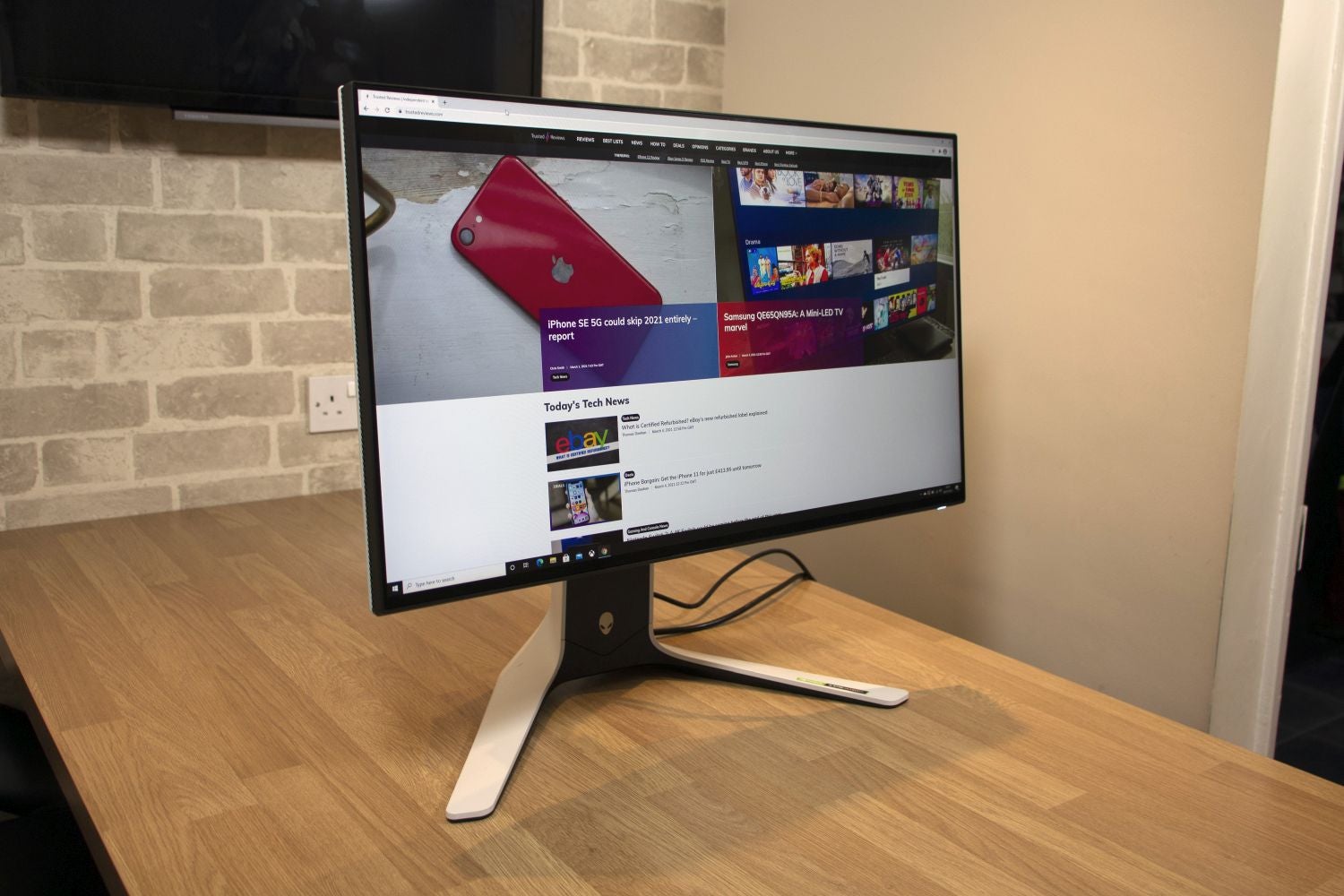 You need mainstream gaming ability on a budget
With a 144Hz refresh rate and reasonable colour accuracy, the Dell S2721HGF comes with all the specs to satisfy the average gamer, especially if you’re planning to stick to single-player games.

You want brilliant colours or more features
The Dell S2721HGF monitor lacks some of the more premium features, with the resolution limited to 1080p and refresh rate a little lower than competitive online gamers would like.

The Dell S2721HGF deploys fantastic contrast to ensure great depth and punch, and it offers solid 144Hz syncing performance and colours that can cope with mainstream gameplay, all for a low price. However, it’s lacking extra features; spending more will net you a crisper image, better resolution, greater colour accuracy and a higher refresh rate.

What warranty does the Dell include?

By default the Dell is protected by a three-year warranty, and longer and more extensive upgrades are available.

What’s included with the display?

Since this is an affordable and relatively simple display, only an HDMI cable is included here; remember to buy a DisplayPort cable separately, if you need one.