The Razer Raptor comes close to being the perfect gaming monitor. Its 27-inch Quad HD display is gorgeous, plus it brags all the important gaming features to ensure a top-class performance. You have to pay a fair sum for the privilege, especially given that it lacks integrated speakers, but this is the best option for those who don’t have pockets deep enough to make the jump to 4K.

Razer has been gradually taking over gamers’ desktops for years offering top-grade mice, keyboards and headsets. The Razer Raptor monitor marks the next step in its gaming domination, completing the set of accessories to accommodate your rig.

In typical Razer fashion, the Raptor is brimming with fancy features while showcasing oodles of class in terms of both design and display. Razer rarely makes a misstep with its gaming gadgets, but it does charge a premium – the Raptor costs a whopping £699.99.

However, for that money you’re getting a Quad HD resolution, 144Hz refresh rate, compatibility with both Nvidia G-Sync and AMD FreeSync, and a gorgeous IPS panel. But is that enough for the Raptor to be considered good value?

Razer really knows how to make a gorgeous gadget. The Raptor is one of the best-looking gaming monitors I’ve seen. Its jet black design is subtle yet stylish. Pinch the bezel or the stand and you can immediately tell this is made of sturdy stuff.

The rear is clad with fabric, which may sound bizarre for a gaming monitor, but certainly doesn’t look out of place. Personally, I find this textured finish more appealing than the sheets of metal or plastic usually seen. It also helps the iconic Razer logo – which is metal – to stand out. 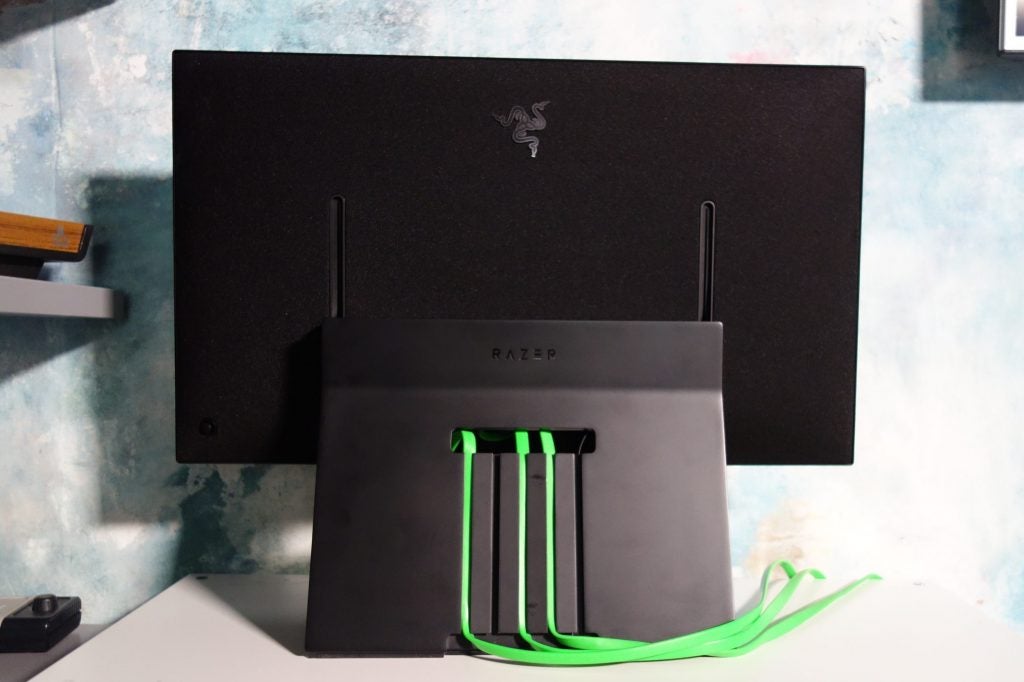 The fluorescent green cables that come bundled with the Raptor are initially overbearing – it’s a big deviation from the usual background-blending black wires. I did eventually warm to Razer’s colour choice, though, especially since the cables can be tucked into the stand for a cool green-on-black striped effect. But equally, I’m sure the attention-grabbing green won’t be for everyone.

The stand itself has a larger than average footprint, demanding a lot of space on your desk. It’s well built, though, and can easily be adjusted into various positions with 90-degree tilting and 100m vertical travel. 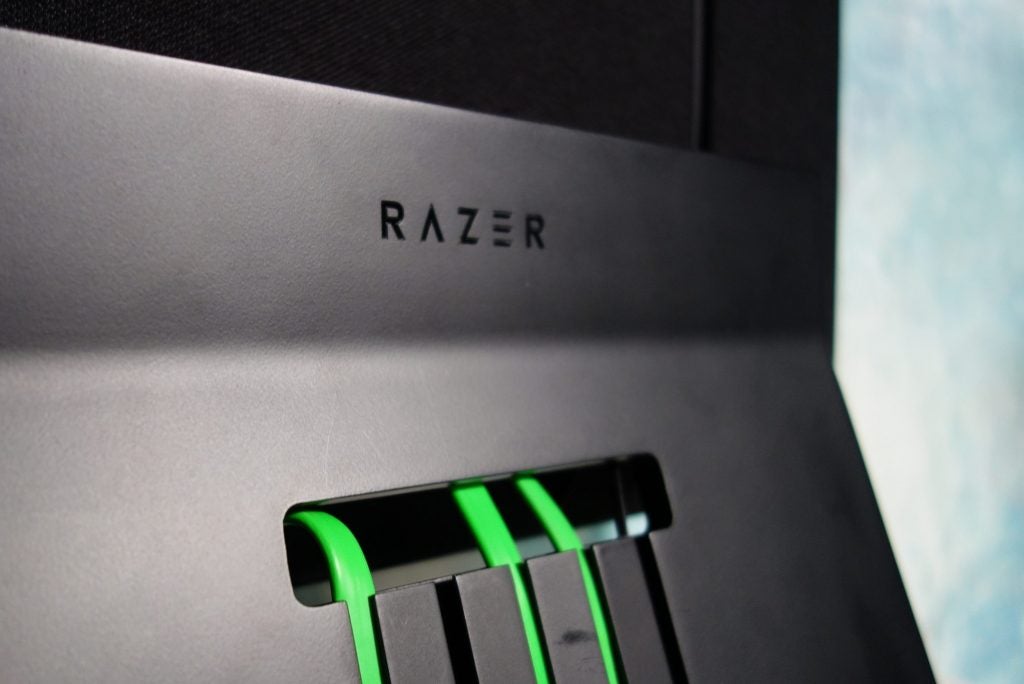 The Raptor features all the ports you’d want from a modern day monitor: HDMI, DisplayPort, USB-C and two USB. Sandwiched between the monitor and the stand, the ports can be difficult to access. However, plug all the bundled cables in during the initial setup, and it shouldn’t be an issue again.

The one design feature that really helps the Raptor distinguish itself from other gaming monitors is the RGB light strip that wraps around the base of the stand. At default, the lights will continuously cycle through various colours. But the Raptor can also buddy up with Razer Synapse, allowing you to change effects, set it to a static colour or turn it off completely. You can even sync it up to other Razer peripherals for a harmonious light show.

The Raptor’s fantastic picture quality is obvious from a glance. Colours are bright and vivid, with Razer boasting 100% sRGB colour coverage. It also sees a surprisingly high 94% DCI-P3 colour coverage, which should give movies a glossy boost.

The great range of colours on offer here improves game visuals by quite a margin. In Dirt Rally, the red and yellow cars stood out far more than they did with other monitors I’ve used. 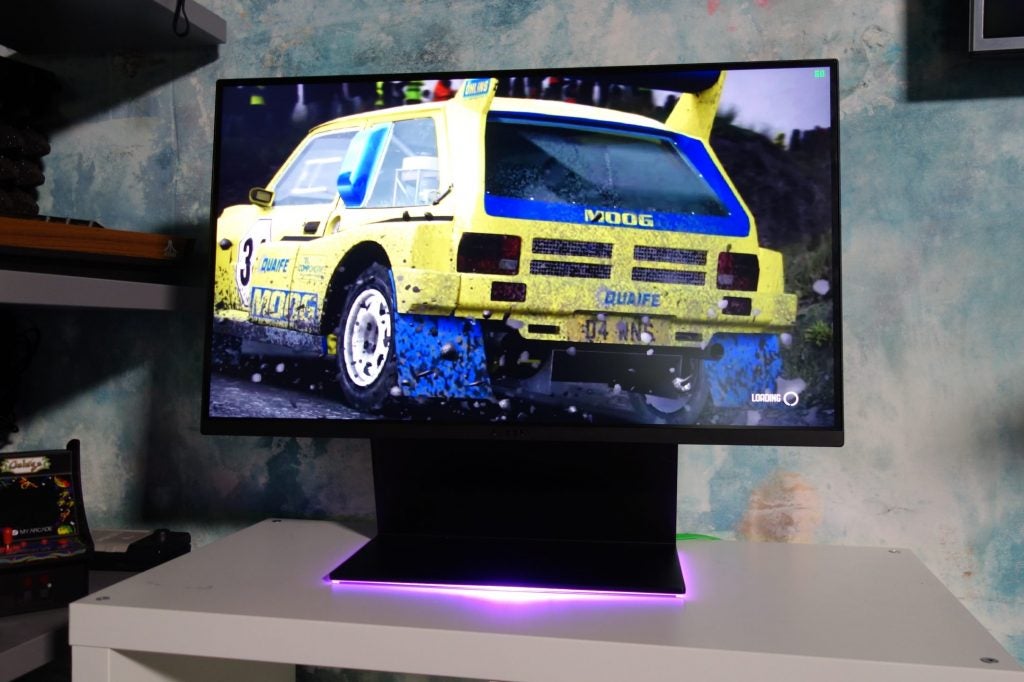 The Raptor is also suitably bright at 361 nits, while dark colours looked rich, excelling in dim environments such as the shadowy caves of Tomb Raider. Contrast is decent, too, at 1170:1, besting the likes of the similarly priced ViewSonic Elite XG270QG.

Support for HDR (HDR400) is also included. The benefits of this are limited, though, since few games and videos currently support the technology. It’s still a great bonus feature, and ensures your monitor is future-proof for years.

Razer provides several Game modes, which are basically just calibrated presets for various genres including FPS, MMO and racing. You’ll likely get better results by calibrating the monitor yourself, but it’s nevertheless useful for screen-tweaking novices.

The 144Hz refresh rate helps to ensure fast-paced motion in games looks super-smooth. This isn’t quite as nippy as the 165Hz or 240Hz monitors beginning to flood the market, but should still prove fast enough for all but the most serious of competitive gamers.

One of the main appeals of the Raptor is the number of features crammed inside. It’s hard to find a checkbox it doesn’t tick, especially since it supports both Nvidia G-Sync and AMD FreeSync to eradicate screen tearing. 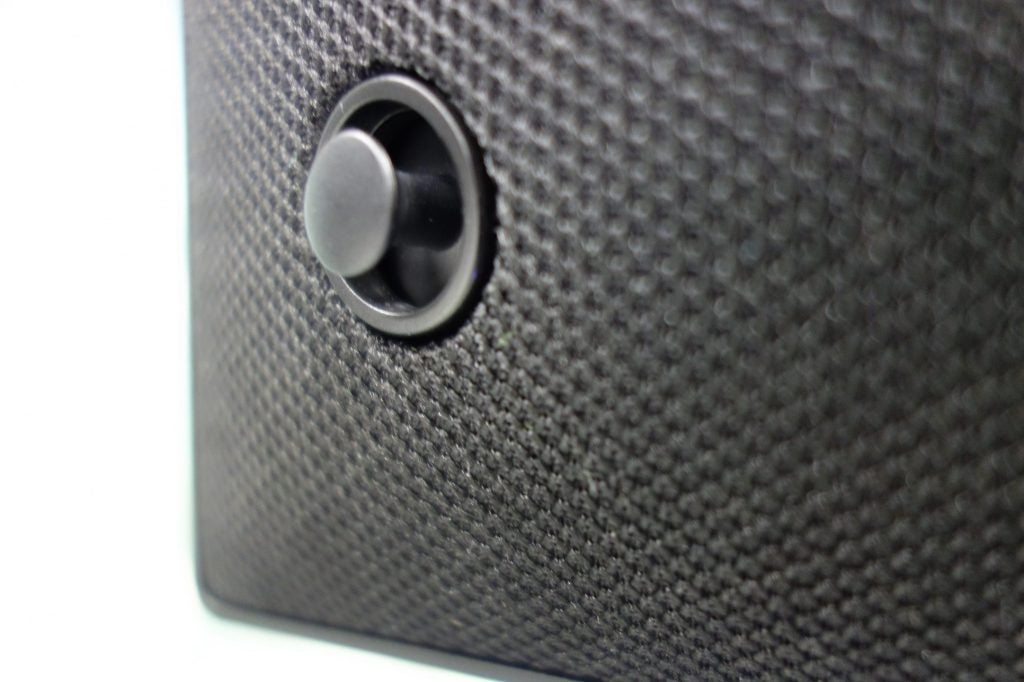 It’s often a pain to navigate a monitor’s OSD, but the Razer offers the best solution available with an easy-to-reach joystick. Flicking it to the right garners access to a menu of options, such as activating an on-screen refresh rate counter, adaptive sync, and even a Picture-in-Picture mode that allows you to display two inputs simultaneously for multi-tasking.

Most of these features can also be reached through the Razer Synapse app, which is even easier to use. It’s here that you can configure the RGB lights and sync to other devices such as Philips Hue bulbs.

The Raptor lacks integrated speakers, which is a pretty big deal considering the monitor’s price. I’m sure Razer would argue that to integrate high-class speakers, would have resulted in a significant bump up in the Raptor’s price – the Razer Nommo speakers cost £110, after all. Personally, though, I’d take low-grade speakers over nothing at all. 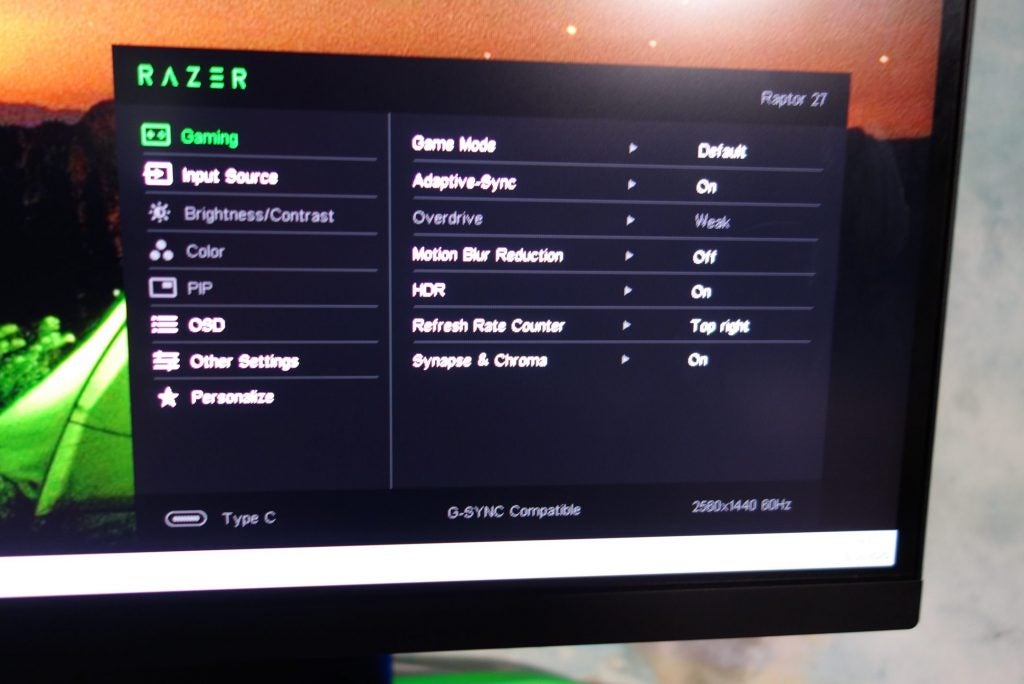