The Dell S3220DGF gaming monitor offers superb core image quality inside an immersive, rock-solid and subtle design. This makes it a great monitor for mainstream gaming, especially in single-player titles. But it’s missing features and extravagant design, and for playing high-level eSports, you’d be better off looking elsewhere.

The Dell S3220DGF gaming monitor doesn’t have the flash of the average Alienware display. Instead, it concentrates on providing a great core experience at a solid price.

To that end, Dell serves up a 32-inch, curved VA panel with a 1440p resolution and AMD FreeSync 2. On paper, at least, that’s an impressive slate of features for mainstream gaming.

The Dell S3220DGF’s 32in diagonal means this screen is on the large side, and it has an 1800R curve which is entirely standard for a gaming display. It isn’t a dramatic curve, but it works well, adding immersion and improving viewing angles without becoming distracting.

The 2560 x 1440 resolution stretches across the 32in display, and this is a sensible mainstream figure. It’s high enough to provide a crisp gaming experience, but it isn’t outrageous. As such, a broad range of graphics cards will be able to run games on this panel, including cards such as the Nvidia RTX 3070 and Radeon RX 6700 XT. Only a 4K display will be sharper, but that will require a far more powerful graphics card. 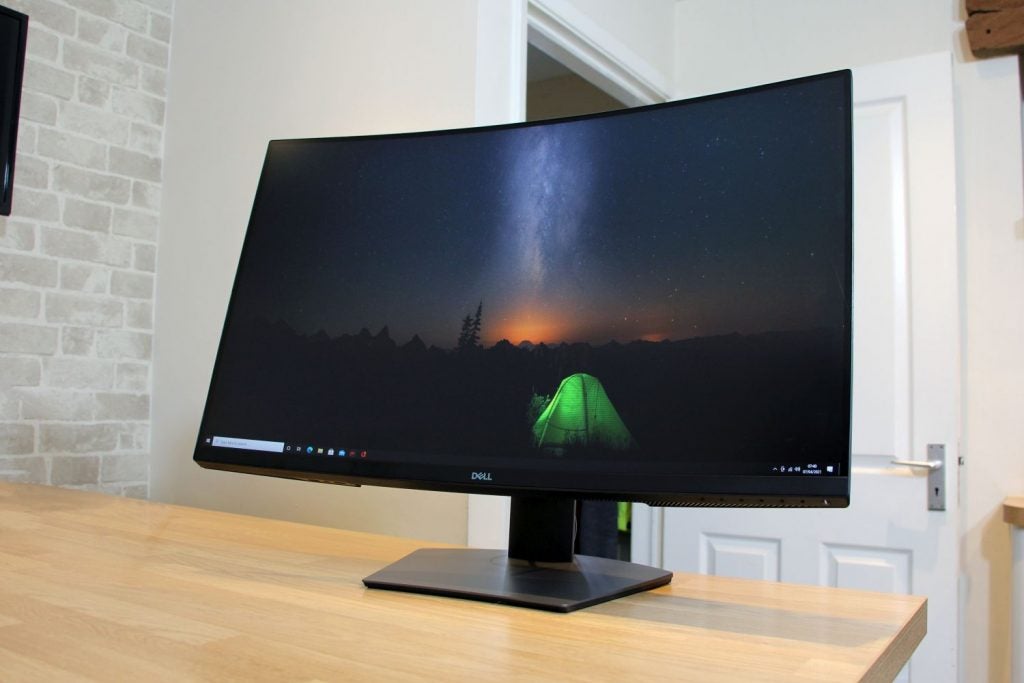 Dell’s display has AMD FreeSync 2 with a peak refresh rate of 165Hz, and it also works with Nvidia graphics cards. That refresh rate is high enough to handle mainstream eSports games, and it will make single-player titles look butter-smooth. It isn’t fast enough for top-tier eSports gaming, however.

Beneath this, you’ll find a VA panel with 10-bit colour and a 4ms response time. Again, those figures are more suited to single-player gaming and mainstream eSports gameplay – that response time needs to be lower for high-level competition.

The Dell’s logos use a blue, metallic shade, but that’s it for ornamentation. Subtle gunmetal plastic is used throughout, the stand is a sleek pillar of metal, and the base is smart, flat, and ideal for peripheral storage. The bezels are slim, and the build quality is consistently impressive. Dell’s display also has height, pivot, and tilt adjustment, but no portrait mode option which, again, is entirely normal for a curved monitor. 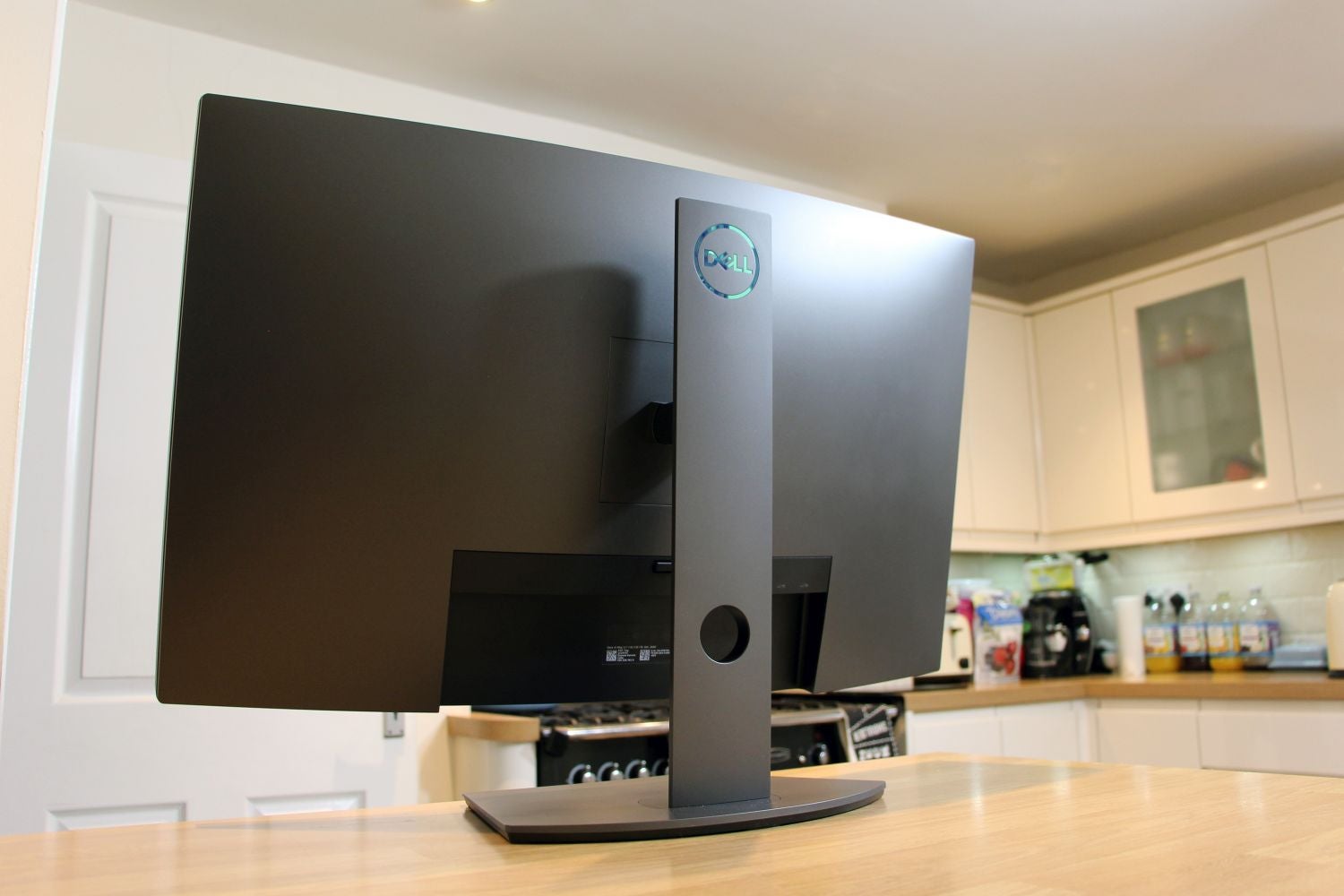 The inclusion of four USB 3.0 ports is reasonable but the Dell monitor is lacking elsewhere. There’s no USB-C connectivity and no speakers, no headset hook, and only basic cable routing. And if you want a gaming display with RGB LEDs, then you should look elsewhere.

The Dell is easy to build, with a stand that snaps into place and a base that attaches with a single screw. Its on-screen display is fast and sensibly organised, and it’s navigated with a row of no-nonsense buttons, so you don’t have to mess around with a fiddly joystick.

The Dell’s decent, discreet design sits alongside impressive quality. I used a colorimeter to determine the exact benchmark figures of the display, with the Dell delivers a brightness level of 277 nits and a black point of 0.06 nits out of the box. This results in a jaw-dropping contrast ratio of 4616:1. Dropping to a more reasonable 150 nits saw the contrast hit 3750:1, which remains brilliant.

Those are impressive results – and far better than any IPS display. That contrast ratio ensures fantastic vibrancy and nuance, and the black point and contrast combine to provide depth and detail in darker areas. It’s a tremendous start when it comes to making games look their best. 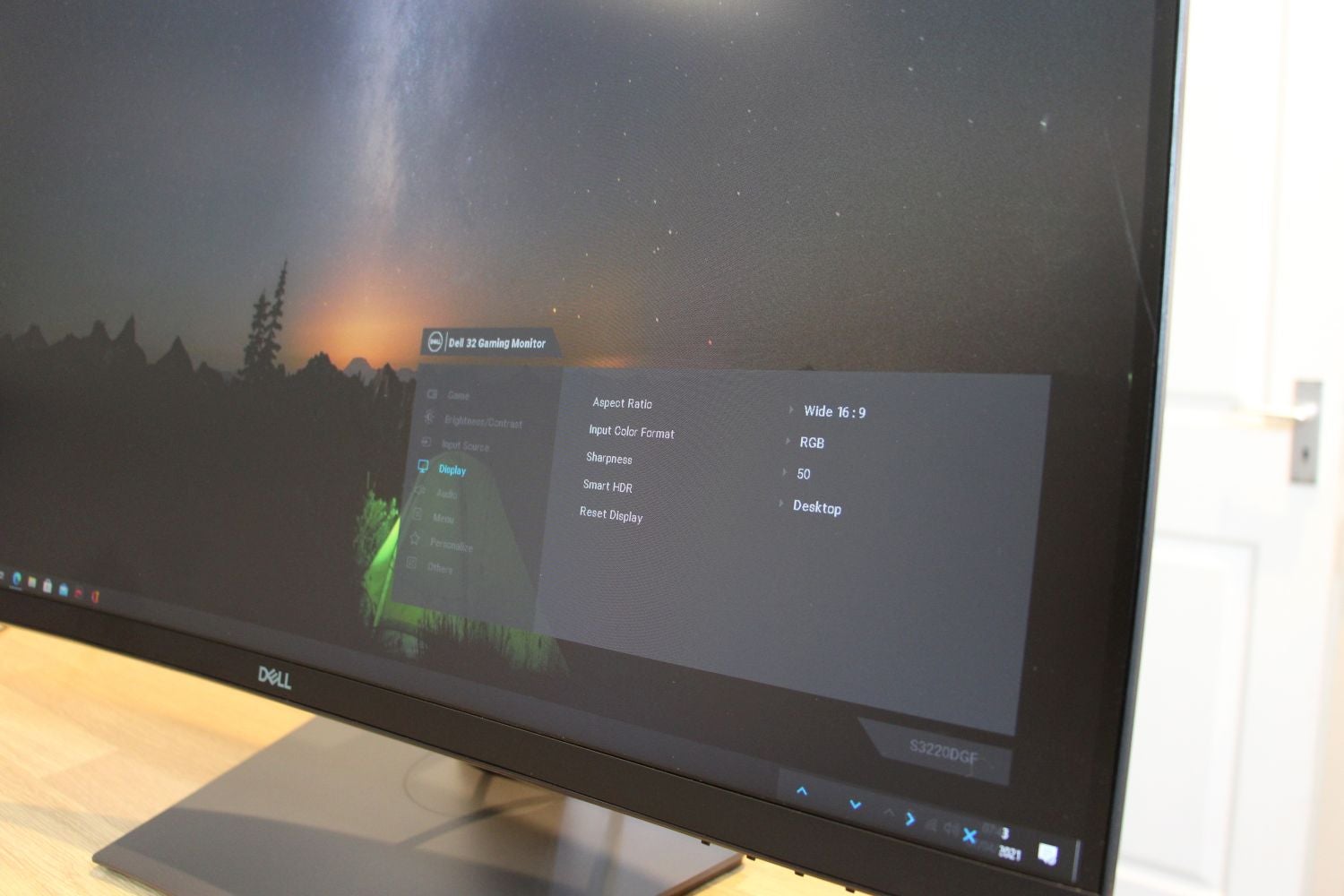 The display’s Delta E of 1.64 and colour temperature of 6519K are both excellent, and they create accurate colours – both figures are below the point where human eyes will detect inaccuracies. The panel’s sRGB coverage level of 95.5% is high enough to ensure that this display can render virtually every shade required by mainstream games and movies.

If you want to play high-level competitive games, you’ll be better off with a 240Hz display with a 1ms response time, even at a lower resolution – it will be smoother, faster, and more crisp.

There are other areas where the Dell is suitable for mainstream gaming but not ideal for anything more demanding. Take HDR. On the positive side, when the Dell is operating in HDR mode its peak brightness of 462 nits is joined by a very low black point, which means you get colossal contrast – you can see the extra punch and depth when compared to SDR. This screen adheres to the DisplayHDR 400 gamut, but it goes beyond what most screens offer at this level. 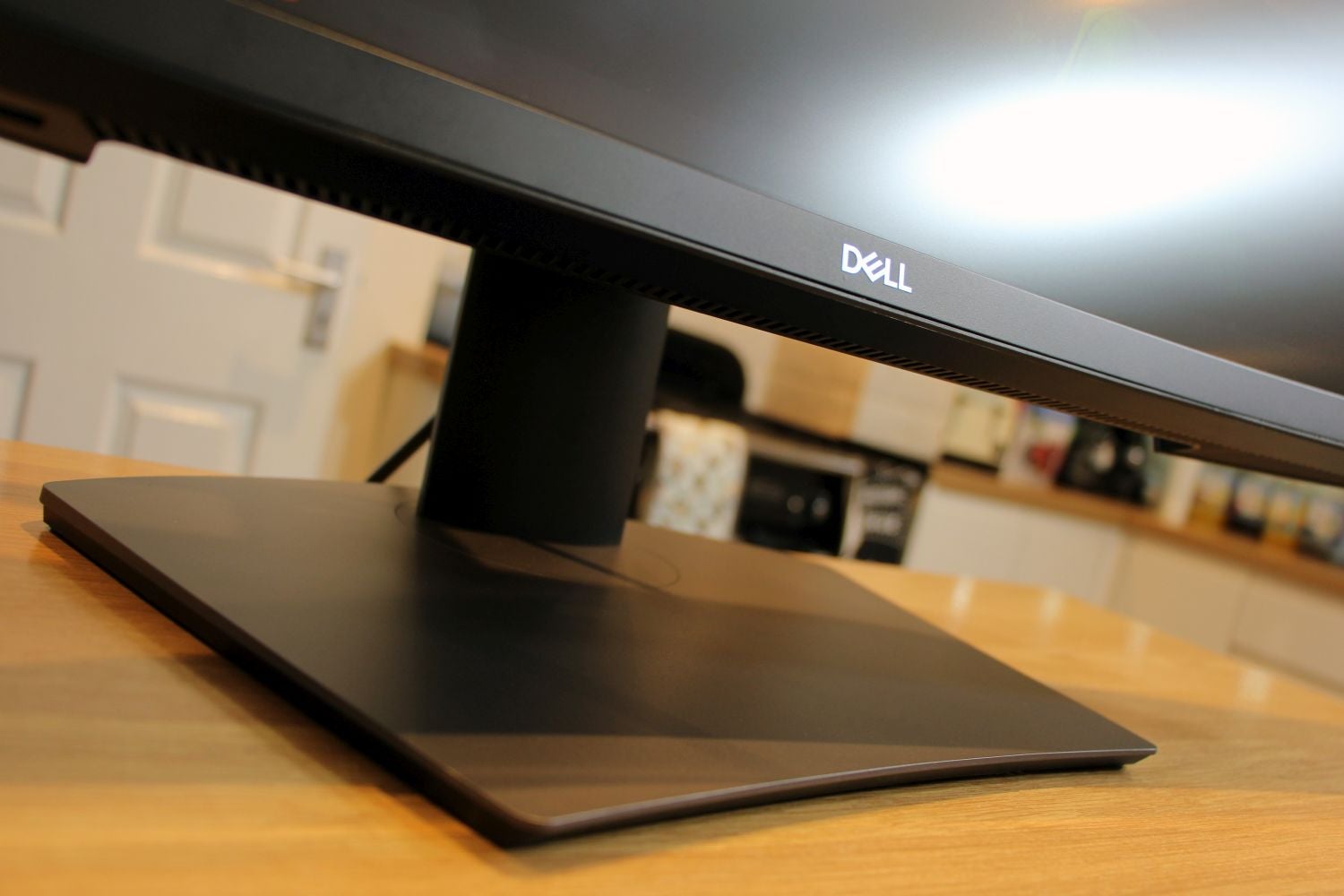 Negatively, though, Dell’s improved contrast still can’t match pricier HDR panels, and the edge-lit dimming lacks finesse, so you don’t get much nuance. The display also only renders a middling 85% of the DCI-P3 colour gamut, so it can’t display every shade required.

The Dell is only suitable for mainstream work situations, too. While it’s adept at handling colours in the sRGB gamut, it’s no good with Adobe RGB. As with gaming, the Dell is ideal for mainstream situations, but it doesn’t have the versatility for anything beyond that, so content creators should look elswhere.

The Dell S3220DGF is an impressive gaming monitor in many areas: it offers superb core image quality alongside subtle and sturdy design, and its size, resolution and curve deliver absorbing gaming.

Dell’s display has good adjustability, but it isn’t perfect: it’s decent but unsubtle in HDR, and other panels will offer 4K sharpness or the extra speed delivered by higher refresh rates.

Nevertheless, at this price, there’s a lot to like. The Dell S3220DGF is a top-notch option for immersive mainstream gaming.