Remember the Dell XPS 14z, Dell’s premium 14in metal laptop? Well, if you can’t afford one of those or, for some reason, the design doesn’t appeal to you, there’s the Inspiron 14z. Essentially a more wallet-friendly, chunky and ‘ordinary’ version of its slim designer sibling, this Inspiron still brings some of the Z chic to the table, largely thanks to its mostly brushed aluminium chassis and clean lines.

However, while both the lid and palm/keyboard areas are metal there’s no unibody to be found here, and both the screen’s bezel and laptop’s bottom half are constructed using plastic. Thankfully it’s matt rather than glossy, so you won’t need to worry about annoying reflections or smudges. 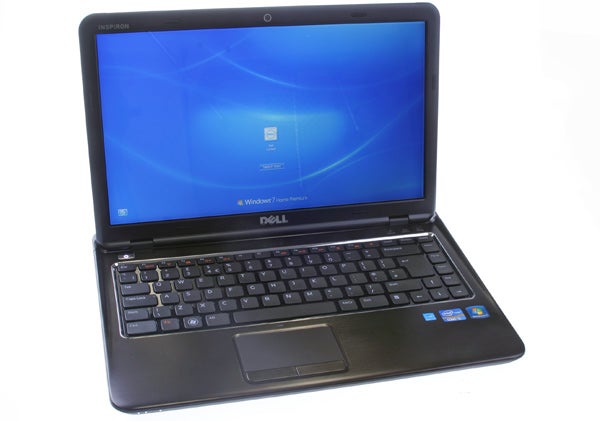 And there are advantages to the less premium build: obviously starting price is a lot lower, with the Inspiron 14z available from £530 where the XPS 14z starts at £700; you can choose the colour of the lid (black as default or red for £10 extra); the wider chassis allows for dedicated navigation keys; and the battery is interchangeable so you can carry a spare.

You do lose out on niceties like the backlit keyboard though, and while the screen is the same glossy 14in, 1,366 x 768 affair as the XPS, you only get Intel’s integrated graphics to feed it. Other specs are also a little more limited, with up to Core i5 instead of i7, the same 8GB of RAM, and a 750GB hard drive as your top option compared to a 256GB SSD on the XPS 14z. 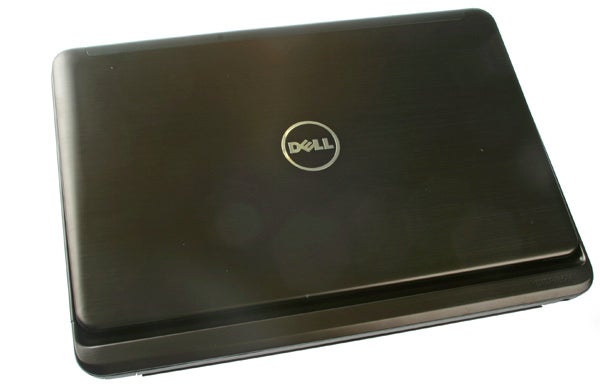 Getting back to design, on its own merits the Inspiron 14z looks okay, but whether you find it attractive might depend on individual taste. Our main aesthetic concern is that the slim, tapering lid looks like it belongs to a different machine than the chunky base, with the 14z’s large protruding rear enforcing this impression. Once opened it up we have few complaints though, and if you can get along with the chunky and slightly rounded look, there’s little to dislike.

Build quality is generally good, with minimal flex or creak and none in the keyboard. Of course build is yet another area where it doesn’t match up to the XPS or the likes of Lenovo’s ThinkPad X121e, but it’s nonetheless plenty solid enough to avoid concern.

Connectivity is hidden behind plastic flaps. This maintains the Inspiron 14z’s clean look and keeps the ports free from dirt and dust, but we would rather have the convenience of plugging things in easily. One area where this applies most is memory sticks, as wider sticks won’t plug fully into the USB ports since they’re too deeply recessed. 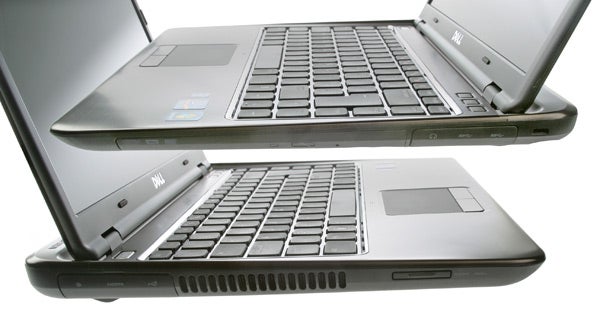 This aside, connectivity is good. On the left side is an SDXC memory card reader, and under the flap here you’ll find a USB 2.0 port joined by both HDMI and DisplayPort for video. The right houses a DVD writer (yet again there’s no Blu-ray option here, sorry) and another flap covering twin USB 3.0 ports and a headphone/microphone jack.

The Gigabit Ethernet port is hidden behind a rubber, hinged bung at the rear, and of course Wi-Fi N and Bluetooth are also part of the package. It’s also worth mentioning that the webcam is HD, as this isn’t quite guaranteed on all laptops yet.

Dell has plenty of experience designing chiclet keyboards and the typing experience offered by the Inspiron 14z is nice for what is still a fairly modestly priced machine. Keyboard layout is good, with just the right amount of spacing between the matt keys. Feedback is also decent, with adequate travel and a nicely defined click. While it’s no match for the desktop-like quality of Lenovo’s ThinkPad range, we’d happily use it for hours of word-processing. Our only real complaint is that the spacebar can be a little difficult to hit as it’s recessed and very close to the palm rests’ edge. 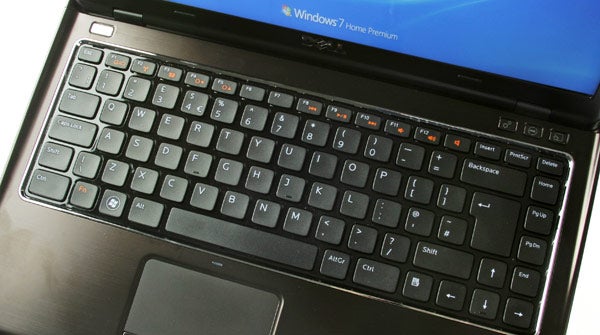 The touchpad is a little small but not so much as to affect usability. What’s more the surface is really nice under your fingers and it’s accurate and sensitive. However, the otherwise responsive and well positioned buttons are incredibly stiff. This doesn’t make them difficult to use per se but they’re not quite as effortless to tap as we’d like. It’s a real shame to see a flaw this obvious slipping into what should be a well-worn design (with it sharing many elements with the long-running XPS range).

Unfortunately, we found the Inspiron 14z’s 14in screen to be significantly worse than that found on the XPS 14z, despite sharing what appears to be the same DNA and 1,366 x 768 resolution. Viewing angles are equally mediocre, but we came across artefacts and banding here. Black levels were the worst offender, with subtle shadow details simply invisible – in fact, the display nearly failed to distinguish the fourth-darkest shade on our greyscale test, which is the poorest performance we’ve seen in years. Then again, this machine is at least following in the footsteps of its predecessor, the 13z, in this regard.

Combined with annoying reflections from the glossy panel finish, this is quite frankly a laptop display to avoid if you care about visual entertainment rather than merely productivity. We strongly suggest you you try before you buy if possible. 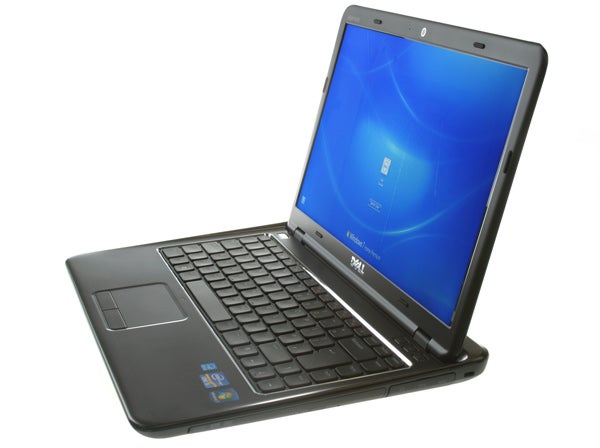 Audio isn’t quite as disappointing, with this Inspiron’s stereo speakers managing clear trebles and a bit of detail if the volume is kept low. However, turn things up and you’re looking at (or rather, hearing) some noticeable distortion, while bass rarely progresses far past tinny. In other words, headphones are not necessary but still strongly recommended.

One up from the £530 Core i3 base spec, our £579 Inspiron 14z sample sports a dual-core Intel Core i5-2430M CPU, which runs at 2.4GHz by default and a maximum frequency of 3GHz on a single core. It’s backed by the usual 4GB of RAM and a speedy, 7,200rpm hard drive, in this case at a fairly capacious 500GB. With this kind of combination, the laptop will handle most daily tasks with ease.

Only on the graphics front is even the most expensive model of this machine somewhat crippled. Mind you, Intel’s integrated effort does now manage the odd undemanding game, as evidenced by a smooth 49fps average in TrackMania Nations Forever – but that was at 1,280 x 720 on Medium Detail, and TrackMania is not exactly a graphically intensive title to begin with. An unplayable 17.4fps in Stalker: Call of Pripyat is more indicative of its performance in modern games.

While on the topic of intensive software loads like gaming, this Inspiron gets a tad noisy considering its chassis isn’t exactly slim and that it doesn’t need to cool dedicated graphics. Under load its fans spin up to an audible level, though it never gets as annoying as the Sony VAIO Z.

In terms of battery life the Inspiron 14z’s 65Wh unit fell just a few minutes short of five hours in our low intensity test (general productivity with screen brightness at 40 percent and wireless radios disabled). That’s better than the Dell XPS 14z managed, putting this Inspiron into the middle of the 14/15in pack – and as the battery is removable you can swap it for a spare at any time. Sadly, it doesn’t fit flush with the base of the machine, though, so instead of being a maximum 25mm thick you’ll actually need 37mm of space in your bag to squeeze this laptop in.

Finally we come to value, and here this Dell does okay, as 14in laptops don’t tend to go for the same bargain prices as their more common 13in and 15in brethren. Throw in the Inspiron 14z’s premium metal-clad chassis and we would have had a decent deal on our hands, were this laptop not let down so badly by its screen. Its limited specs also mean you can get thinner and lighter laptops that perform similarly to our £580 configuration for just a little more – even an Ultrabook like the Acer Aspire S3 can be had for less than £700 – though of course you miss out on the extra connectivity and disc drive.

We were hoping the Inspiron 14z was at worst the cheaper and chunkier sibling of Dell’s premium XPS 14z, but it wasn’t to be. Its partially metal finish is a cut above, its keyboard and touchpad are nice, and it offers reasonable battery life and value. However its screen is several rungs below average, its connections are awkward to access, it lacks dedicated graphics, and all told it simply offers little over its competition.