Though we have a soft spot for Lenovo’s ThinkPad line, of late we’ve been a little underwhelmed, with the much-hyped ThinkPad X1 leaving us feeling especially short-changed. Fortunately, essential ThinkPad strengths like superb build quality and the best mobile keyboards available remain, so we have high hopes for the ultraportable X121e we’re checking out today.

Essentially a high-powered sequel to the X100e, the X121e is an 11.6in ultraportable which comes with either an Intel Core i3 or AMD C50/E-350 CPU at its heart. The former gives you a more powerful CPU with less versatile graphics, while the latter emphasises graphics performance over processing power and is essentially a netbook, hence its starting price of under £330. This being the case, we’ve gone for the i3 version – which incidentally also comes with 3G, all for a mere £510. 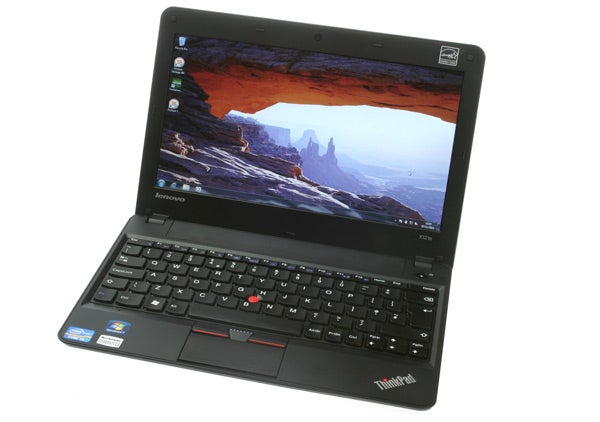 The X121e certainly isn’t an ultrabook of the Acer Aspire S3 ilk, being as it’s quite a square and chunky beast with a depth of 24mm. Nonetheless, its 1.56Kg weight combined with a small footprint (89mm x 208mm) makes it a very portable machine.

What’s more, the X121e’s signature ThinkPad soft-touch finish makes it very pleasant to hold. As it’s also quite rugged and prevents fingerprints, this is still our favourite finish on a laptop. Whether the industrial look appeals to your aesthetic sensibilities will vary, but we mostly like the utilitarian design. Also, if you’re not too fond of unrelieved black you can find a red-lidded version of this laptop too.

The red dot on the ThinkPad logo across the lid (and palm-rest) also lights up red when the laptop is turned on, which is handy for checking its status without needing to open the machine up. It does clash a little with the green power LED on the laptop’s side though. In fact, it’s here that we would like to see Lenovo show just a little more design flare. There are a number of elements, like the yellow sockets, the blue labelling on the keys and the aforementioned clash of red and green, that add up to give this laptop just a little bit too much of a wantonly fashion-unconscious look. By all means there’s a market for this ultra practical design, but we think a version of this (and all Lenovo’s ThinkPad range) finished with just a dash more style would be a hugely appealing proposition. 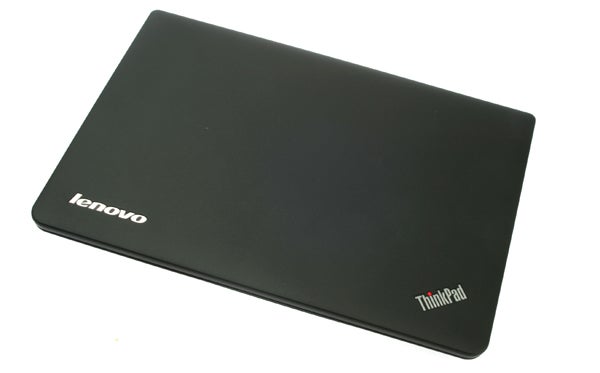 Like the finish and design, build quality is what we’ve come to expect from Lenovo’s professional range; despite the cheap starting price the X121e is built like a brick, except for some minor flex in the keyboard. This is a noticeable contrast to the efforts of many other manufacturers, which even on premium business lines aren’t always as solid as this little unit. It really does feel like it’s built for a life on the road, not just to look good for the first few months you own it.

Moving onto connectivity, this is in line with a high-end netbook or no-frills laptop. On the left is a VGA port, HDMI, USB 2.0, Gigabit Ethernet and a combined headphone/microphone jack, while to the right we have an SDXC card reader and a further two, well-spaced USB 2.0 ports, one of which supports sleep charging (allowing you to charge devices even with the laptop turned off). There’s also a power jack with its own LED indicator.

Of course we do miss niceties like USB 3.0 or eSATA, but every other base is covered (including Bluetooth 2.0 on all X121e versions) and it’s not really fair to criticise such a low-price machine.

Aside from remarkable build quality and reliability, the ThinkPad brand has always been known for its excellent usability. Especially its keyboards have a well-deserved reputation as being the best mobile ones going, and the X121e does nothing to alter that perception. 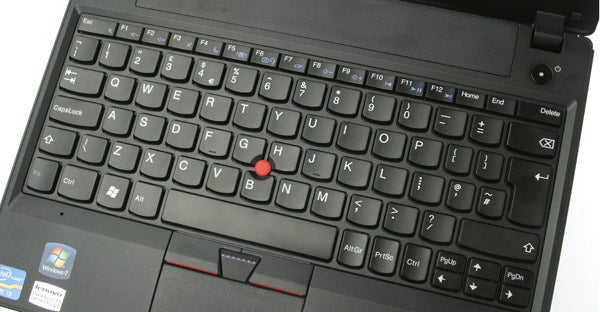 Layout is excellent, with intelligent shortcut placement and dedicated Page Up and Down buttons to either side of the cursor keys. Our only niggle is that Lenovo seems to be one of the very few manufacturers to still place the Fn key to the outside of Ctrl (though you can switch their assignments around in the BIOS).

The matt keys are slightly curved to ideally accommodate your fingertips. They’re also raised much higher than on the average chiclet keyboard, giving as much travel as you could possibly hope for, with a lovely defined click. Basically, the X121e offers one of the best typing experiences of any ultraportable, and we would happily use it as our main text-editing machine all day long. 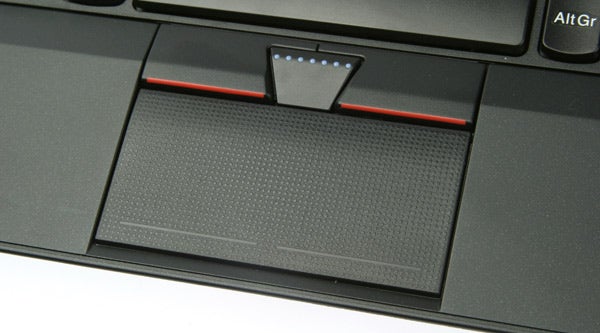 Unfortunately Lenovo’s implementation of the buttonless touchpad isn’t exactly top of its class, and we’d rather use the versions found on the Acer Aspire S3 or Samsung Series 9. Nevertheless, it still proves a reasonably accurate and responsive tool, and as with all ThinkPads you also get an alternative in the red, rubber-topped mini joystick (called a TrackPoint) located at the keyboard’s centre. This nubbin also has three of its own physical buttons, which are simply superb and can also be used in conjunction with the pad. However, in incorporating the TrackPoint, we can’t help but conclude Lenovo has compromised the touchpad experience – that alternative stylish model we were talking about; drop the TrackPoint too.

Where the X121e’s 11.6in screen is concerned, it’s mostly good news again. Haters of gloss will be glad of its reflection-killing semi matt finish, and though its 1,366 x 768 resolution is standard for most laptops, on a panel this small it makes for a very sharp display. Contrast is quite decent though the darkest shade on our greyscale test was virtually indistinguishable. Still, for a matt display blacks were deep and colours punchy, with no nasty backlight bleed or artefacts to spoil the party. 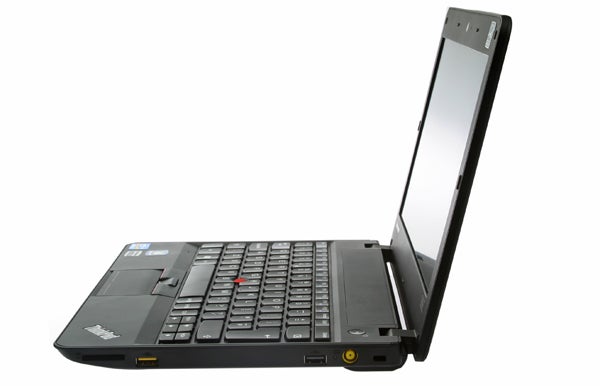 In fact, the screen’s only real weakness is its viewing angles, which are about average. Colour and contrast shift both creep in if you move too far off-centre and you have to angle its hinge right to get the most out of it, but overall it’s still good enough, especially considering the X121e’s price.

On the audio front we weren’t expecting much, and not much is exactly what we got. We’ve heard worse from ultraportables, but even so the speakers here don’t exactly excel. Maximum volume would have trouble filling a small bedroom or office cubicle and the bass quotient is so low it’s almost nonexistent. You can certainly get by watching a bit of catchup TV or a YouTube clip, but for anything more involving, a decent set of headphones or external speakers is a must.

As already mentioned, you can go either the AMD or Intel routes with Lenovo’s ThinkPad X121e. For AMD you get the choice between a dual-core Fusion 1GHz C-50 or 1.6GHz  E-350 CPU. Both will give you netbook-like performance, meaning they’re adequate if you don’t plan on doing heavy multi-tasking or running intensive applications. They’ll manage general productivity and HD video just fine though. For an indication of the kind of performance you can expect, have a read of our Toshiba NB550D review, which at under £300 also makes for an interesting alternative if you don’t mind the smaller, lower-rez screen.

Back to our Intel version, the only choice is a Core i3-2357M running at a fixed 1.3GHz, which lacks the Turbo Clocking or HyperThreading of its Core i5 and i7 brethren. While this will be adequate for many users, those who regularly run demanding software or like to keep several apps open at once might find performance rather sluggish. The lower CPU performance also tells in games, with Intel’s integrated graphics only managing 27fps in our standard TrackMania Nations Forever test at 720p and Medium detail.

At least you don’t have to worry about memory as the X121e comes with the standard complement of 4GB and can be upgraded to a whopping 8 GB when buying direct from Lenovo. The 320GB hard drive isn’t the most capacious available but it’s of the fast 7,200rpm variety rather than the more common 5,400rpm drives you’ll find in most budget laptops. It’s also a standard drive so can be swapped out with either a larger drive or an SSD, and again Lenovo do offer the option – if you have £240 to spare for a 128GB SSD, which you could buy for £140 yourself.

It’s also worth mentioning that the included software is Windows Professional rather than the usual Home Premium, yet another value-add to what is already an excellent machine for the money.

Last but not least there’s battery life to consider, and here the X121e passes without mishap, as its 5,160mAh battery lasted over five and a half hours. And remember that the battery here is easily interchangeable, so you can bring a spare to effectively double your time away from a socket. 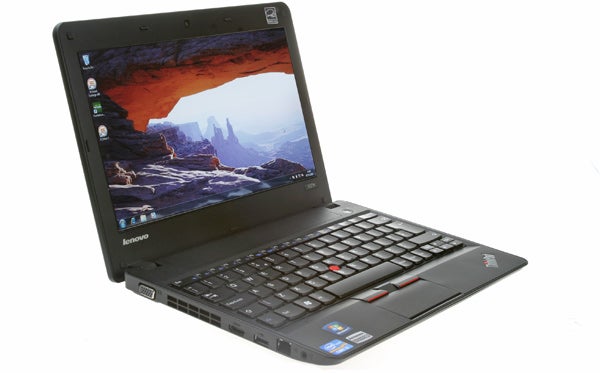 Frankly, for everything Lenovo manages to pack into its 11.6in ThinkPad, the starting price of £330 is ridiculously cheap, and the £510 for our sample config is still truly excellent value considering that upgrades you not only to Core i3 but also 3G. Admittedly that’s just £50 short of getting a Core i3 version of a sleek and sexy 13in number like the Toshiba Satellite R830, but the X121e offers a far nicer typing experience, more rugged chassis, better screen and 3G. There’s far less choice in the affordable 11.6in segment than 13.3in, and as such this Lenovo is one of the better bargains going.

The 11.6in X121e preserves the ThinkPad brand’s reputation for rock-solid build quality and excellent ergonomics, and throws in a decent screen, well-placed connectivity and good battery life to boot. Frankly, it’s difficult to see how Lenovo achieved all this in a machine starting at £330, though we’d probably go for the 3G-sporting Core i3 version at just £510. Regardless, whether you’re looking for a large netbook or a versatile budget ultraportable, the X121e should be near the top of your list.