The Dell Chromebook 3400 is ideal for buyers on a tight budget who want a robust, spill and shock-resistant laptop. It's ideally for a user of primary or early secondary school age, but the screen is not great, and performance is so-so. If your budget can stretch to it, the Dell Chromebook 3100 2-in-1 might be a better option.

While it’s a fairly standard-looking laptop, the Dell Chromebook 3400’s trump card is its durability. It’s been tested in MIL-STD conditions, similar to the stress tests the U.S. Military applies to devices destined for the field, with the intention of proving that the Chromebook 3400 can survive being accidentally dropped from desk height, or coming into sudden contact with liquids. 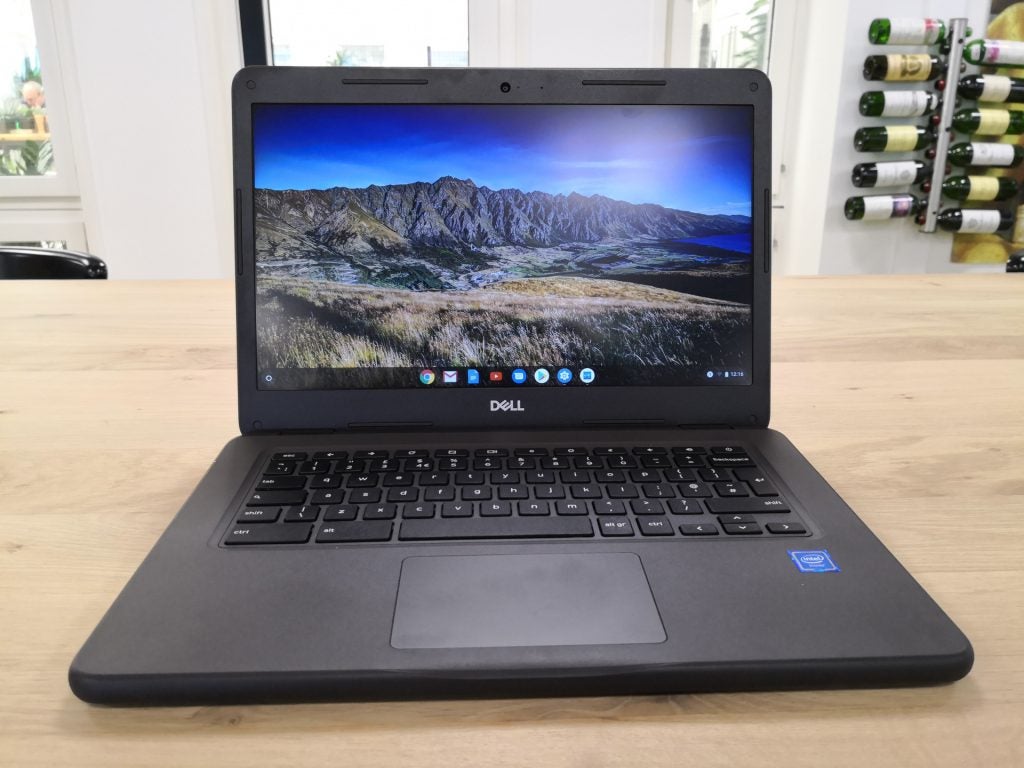 Solid as a rock – the Dell Chromebook 3400 is built to take a beating, but that’s not in an invitation to use it as a weapon, mind.

Sturdy is perhaps the best word to describe the overall look and feel of the Dell Chromebook 3400.

Weighing 1.56kg, it’s relatively lightweight, but it’s firmly anchored to your desktop at all times thanks to two rubberised strips which run laterally across the underside. It’d take some doing to dislodge the Dell Chromebook 3400.

The hinge mechanism also feels reassuringly solid. It’s very easy to move the display into a position which suits, but there’s little wobble once it’s set in place. There’s a little bit of flex in the centre of the keyboard, but you’d really have to hammer away at the keys to notice this.

I liked how there are rubberised strips framing the edge of the border of the display, too, meaning that when the Chromebook 3400’s shut, there’s no chance of the screen coming into direct contact with the keyboard. 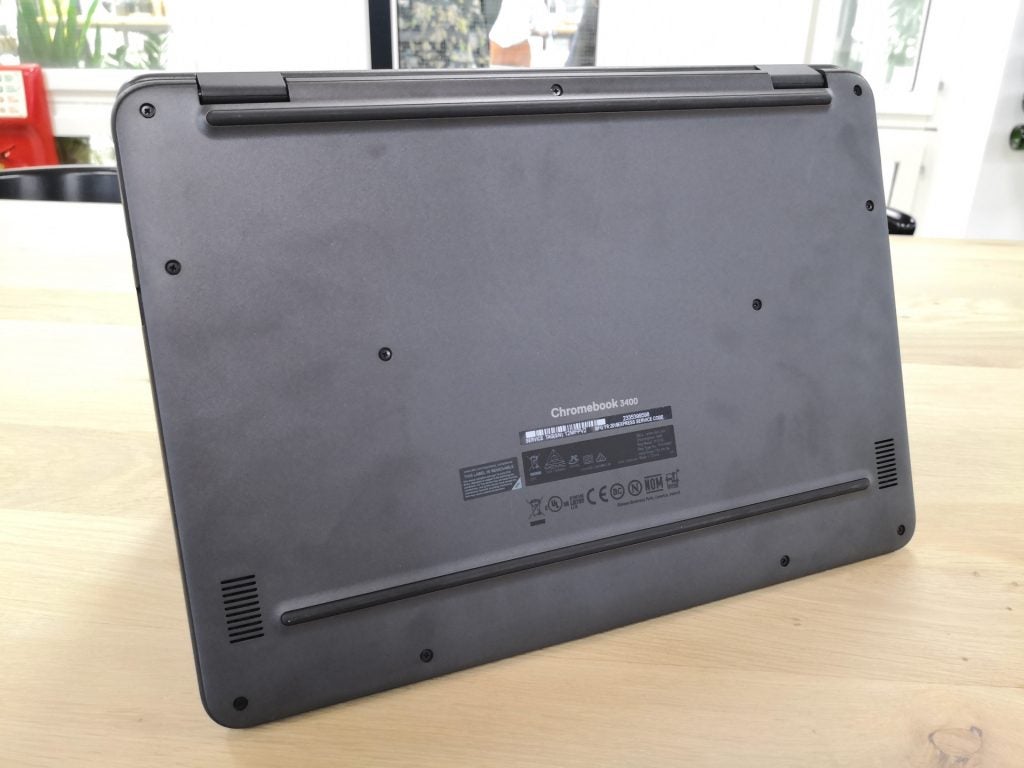 Rubberised strips mean that the Dell Chromebook 3400 stays firmly anchored to your desk – until you stand it up like this.

You get two Type-A USB ports and two Type-C USB ports – one of each on either side – a microSD card reader, 3.5mm audio jack for headsets and headphones, and a lock slot.

That said, you should note that none of the ports here can be sealed with plugs – this is a splash-resistant laptop, not a waterproof laptop.

That’s enough in terms of ports for your typical schoolgoer, who may wish to connect a USB mouse and transfer files and photos from a memory card.

On the subject of storage, you get 32GB on board here, 17.2GB of which is user-available. That’s not a huge amount of space at all, but, when you consider that most of your work will be saved to your Google Drive and stored in the cloud, you don’t need to worry about any homework, essays, or reports going missing. Still, this means the number of photos, apps, and other files you can save directly on the Dell Chromebook 3400 is limited. 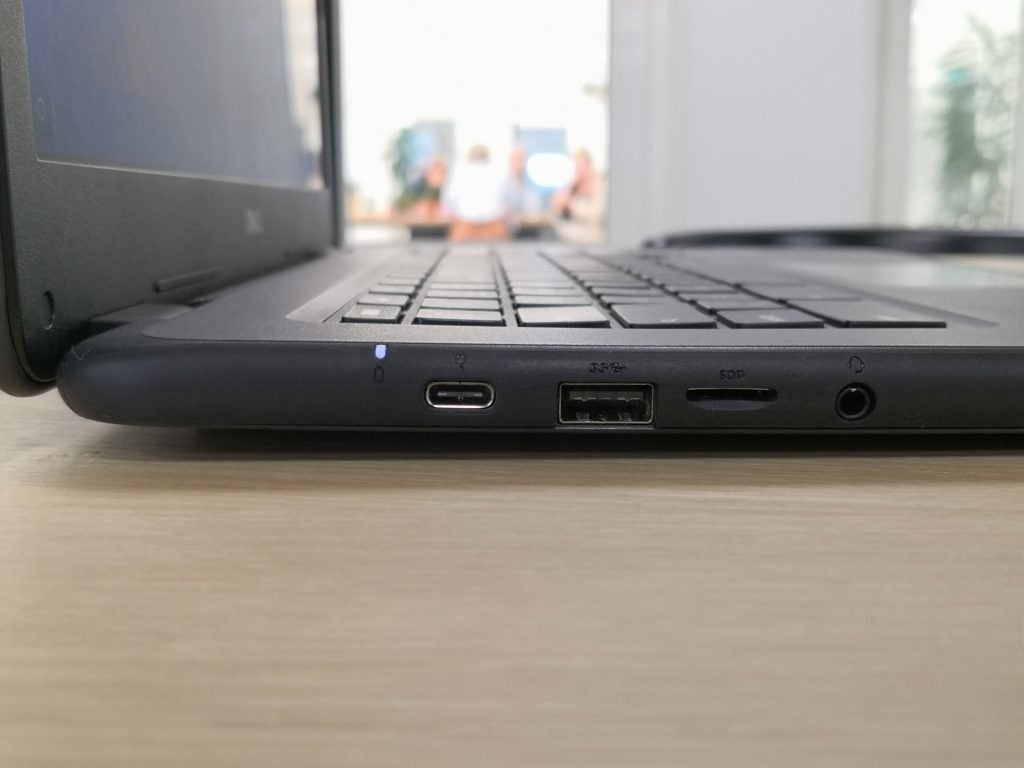 Speaking of which, you should note that the specs of the Dell Chromebook 3400 are not exactly cutting edge.

That’s because Chrome OS is designed to be a lightweight operating system which doesn’t need the latest and greatest components to run it.

In the absence of any up-to-date benchmarking tools which are designed specifically for Chrome OS, using comparative results to give an at-a-glance idea of performance is our best bet for now.

Running the show is an Intel Celeron N4000 Processor, the same one which powers the Dell Chromebook 3100 2-in-1, so it’s not surprising that they returned similar Geekbench scores – a single-core score of 2147, and a multi-core score of 3823.

That’s below the usual benchmark that Geekbench makers Primate Labs suggest for average processor performance (4000 for single-core, and 8000 for multi-core) but that calculation is based on a Microsoft Surface Book with an Intel Core i7-6600U processor – Chrome OS can quite clearly run on much less powerful components. 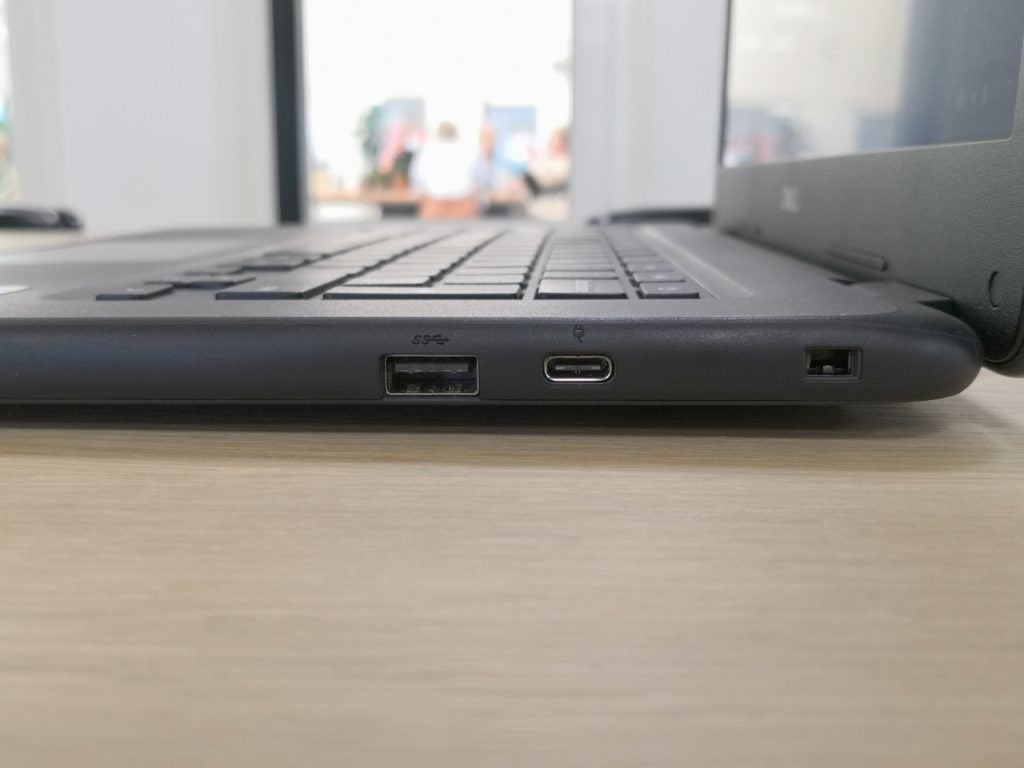 As there’s no discrete charging port, one of the USB-C connections tends to stand in for this – meaning that the USB-C port on the right-hand side is the one you’ll mainly use for data transfer.

With most of your work being written within Google Docs and Google Sheets, and everything being backed up to the cloud automatically, some of the ‘lifting’ is being done by Google, and when writing, your experiences will by and large will depend on the quality of and local traffic on the Wi-Fi connection you’re using.

That said, the Dell Chromebook 3400 is not fantastic at multi-tasking, even when you’re on good Wi-Fi. When writing a report (or chunks of this very review), I’d find that I’d run into a slowdown if I had more than ten tabs open in Chrome while I was flipping between working on this review and an app like Pixlr or Photoshop Express.

Like a lot of people, I like to have YouTube playlists on autoplay running in the background while I work – this did cause headaches, as it’s a bit of a drag on processor power. Granted, a lot of schoolkids probably won’t be listening to music during lesson time, but during homework, after school hours, not being able to easily listen to any lo-fi study aid playlists is a bit of a drawback. 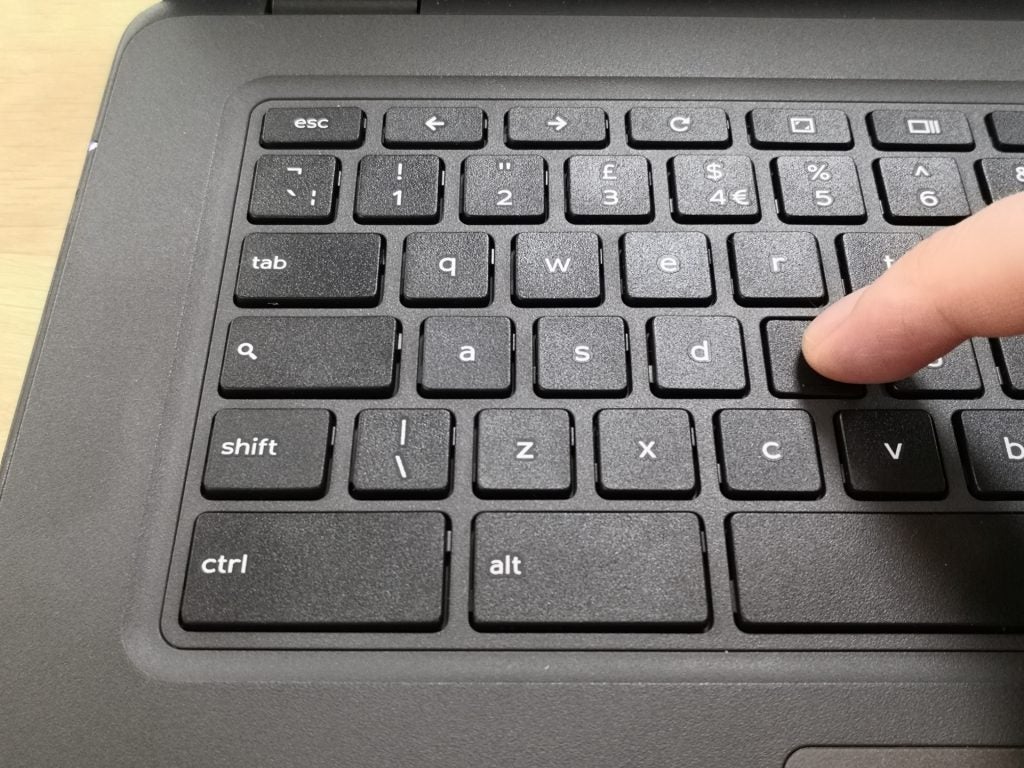 The Dell Chromebook 3400’s keyboard feels just as tough and solid as the rest of the laptop does.

The Dell Chromebook 3400’s 14-inch display is not the most high-quality or high-resolution display out there.

Furthermore, I recorded a maximum brightness of just 237.86 nits. That’s fine for indoor work, and will suit for the classroom, but in direct sunlight, anyone using this is going to suffer. A low black level of 0.80 nits is good, but that all adds up to a weak contrast level of 294:1. The recorded colour temperature of 6758K is also too far north of the 6500K spot to give you anything close to natural colours.

While you can run basic photo editing apps on the Dell Chromebook 3400, it’s not at all suitable for learning about digital photography or digital art.

The viewing angles are also poor, to the point where it’s only really OK for working on if you’re looking at the display head on.

That said, the keyboard offers a nice, chunky typing experience. As with the rest of the laptop, the keycaps of the Dell Chromebook 3400 feel solid. They snap back nicely and responsively in a manner which makes it very easy to get accustomed to. The keyboard layout means that the letter keys are relatively small and have a bit more space around them than they would on mainstream lifestyle laptops, which suggests that younger, smaller hands might find them easier to get to grips with. 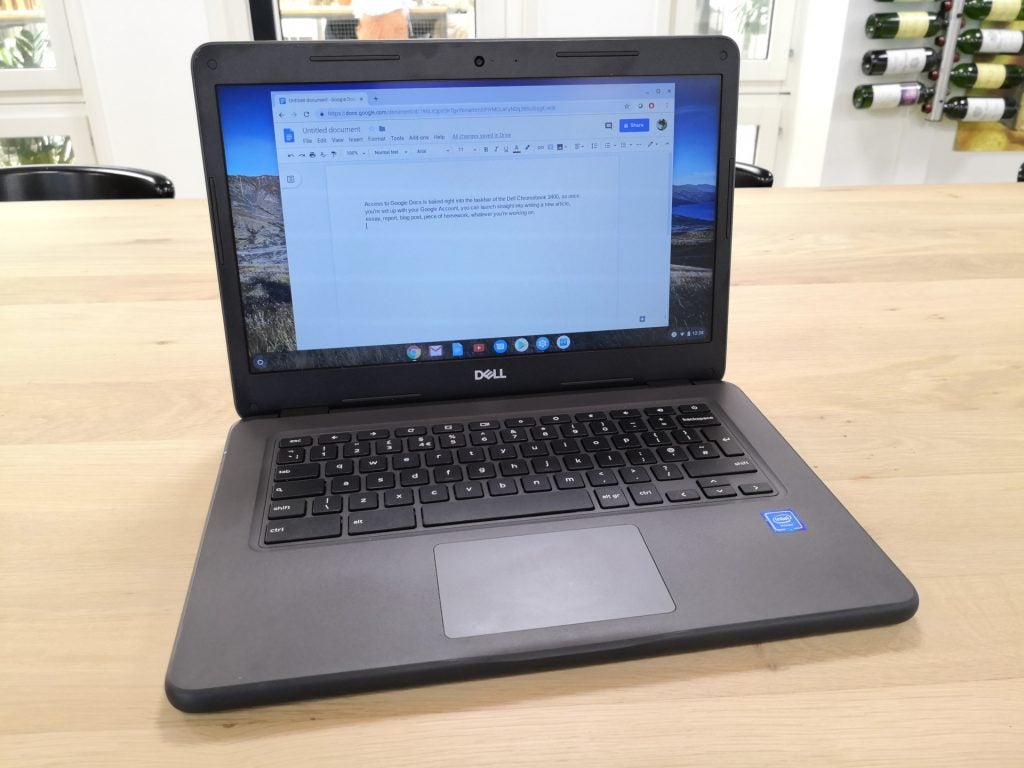 The 3400 is a robust essay writer and boasts excellent battery life – but it’s really only suitable for writing and light Internet browsing.

You should easily be able to get six to seven hours worth of use out of the Dell Chromebook 3400, maybe more, depending on your use.

Running the Geekbench 4 battery benchmark, with the screen brightness set to 150 nits, it took me seven hours and 26 minutes to go from 100% to 6% power.

When writing and streaming music (or trying to) I would be able to get through a typical working day without having to reach for the charger.

Charging the Dell Chromebook 3400 back up to full typically takes just over two hours. After an hour on the charger, you should expect to have between 45-50% of the tank full. 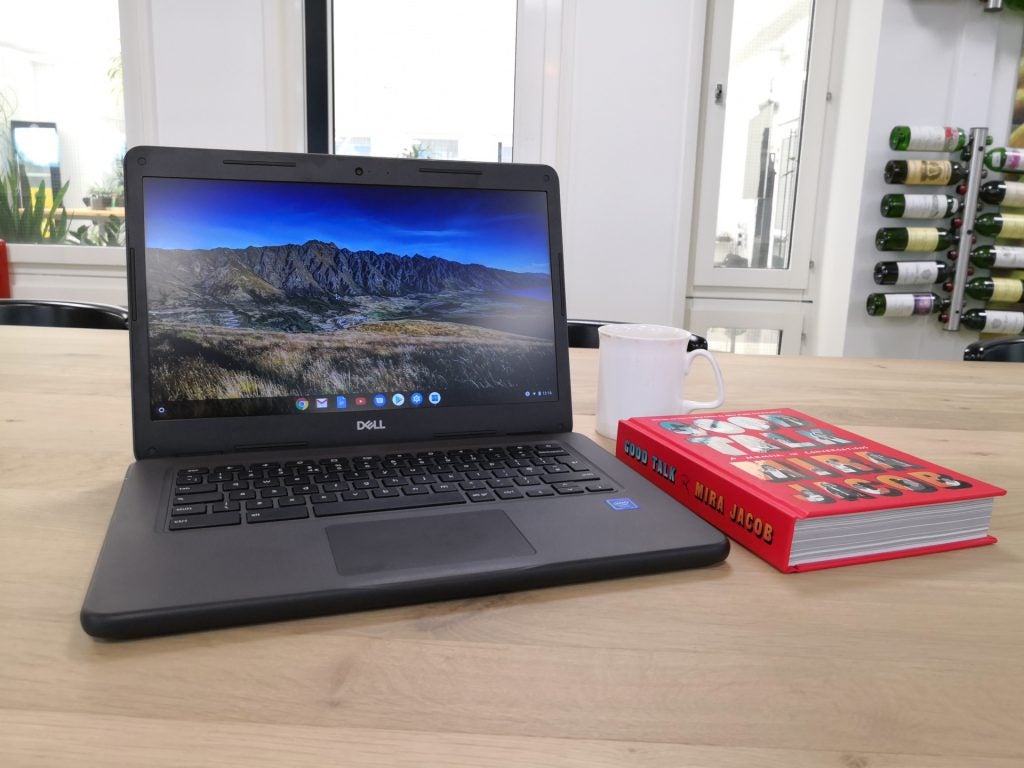 The Dell Chromebook 3400 is a sturdy study aid, but if you want a laptop which can offer more than that, there are better options available.

Should I buy the Dell Chromebook 3400?

If you, your child, or your pupil’s needs are limited to just needing to write, access email and learn how to use spreadsheets, then streamlined access to Google services, combined with the strong and sturdy design will come into their own here.

However, the poor display and average battery performance mean that it’s not the best option for anyone older than secondary school age. College or university students would be better off investigating the Acer Chromebook 514 or the Dell Inspiron Chromebook 14 7000 2-in-1.

Even then, if your budget can stretch to it, the flexible Dell Chromebook 3100 2-in-1, with its foldable design and better screen, might be a better choice for younger laptop users.

A robustly-built and designed Chromebook aimed squarely at younger users.