The Acer Chromebook 514 is light, nice-looking and good value for money. If you only need a laptop for writing, spreadsheets and email, and you’re looking to save money, this is an ideal choice.

What is the Acer Chromebook 514?

The Chromebook 514 is the latest Chromebook from Acer. It’s nicely priced and aimed primarily at buyers on a shoestring budget who want a laptop for word processing, spreadsheets, and the usual kind of PC tasks on the go.

The 514 model I’ve been sent for review is the CB514-1HT model, which features an Intel Celeron N3350 processor, 4GB of RAM, and internal storage of just 32GB – only 21GB of which is available to the user.

That’s a very low amount of storage, until you remember that Chromebook users are intended to leverage the 15GB of Google Drive storage offered for free, as well as the 100GB you can get from £1.59 a month.

If your computing needs don’t really extend much beyond writing and filing copy, spreadsheet maintenance and a spot of Netflix on the side, then the Acer Chromebook 514 will meet your needs, for less than a Windows-equivalent device. 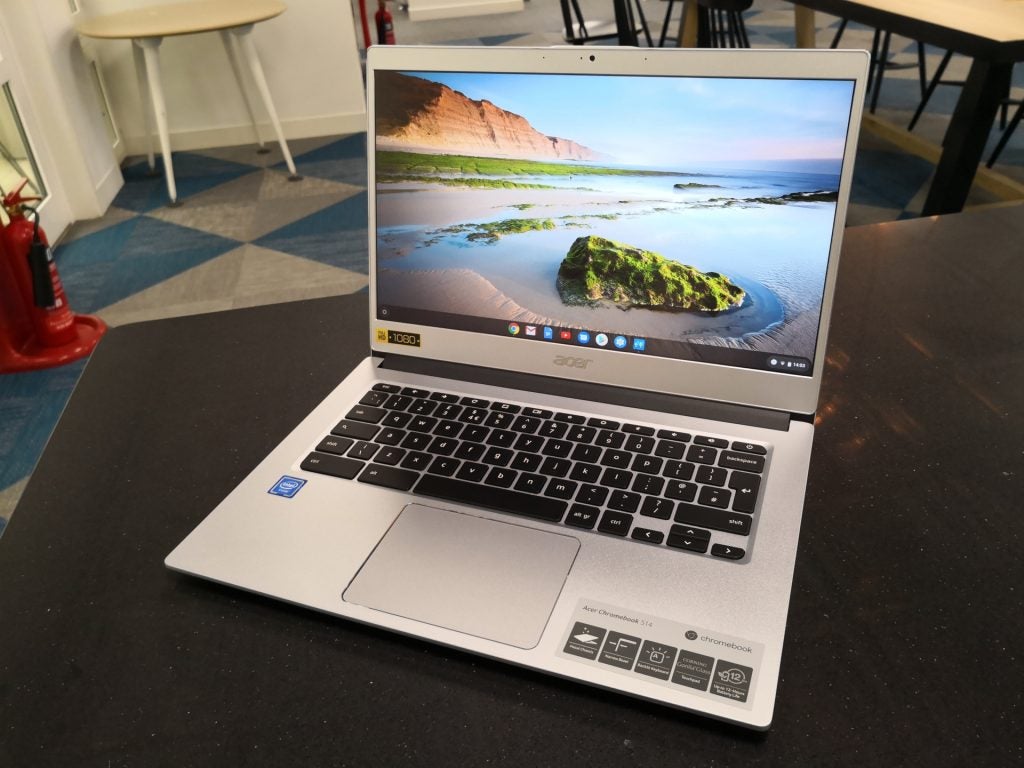 With its metal chassis, the Acer Chromebook 514 looks more expensive than it actually is

Until recently, Chromebooks have also been fashioned from rather naff-feeling flexy plastic and there hasn’t been much consideration on the aesthetics front. This changed with the launch of the Dell Inspiron Chromebook 14 7000 2-in-1, Google’s own Pixel Slate and the Acer Chromebook 514.

While this Acer Chromebook isn’t quite as nice to look at as the Dell or the Google Slate, its lid and chassis are made from aluminium, which immediately makes it feel more premium than a standard run-of-the-mill Chromebook. The only parts of the Acer Chromebook 514’s body that aren’t made from metal are the screen bezel and the hinge, which are plastic.

I’m a little sad to say that the review unit I picked up appeared to exhibit some superficial damage on the top left corner of the display side. Some of the silver paint had come away, making me wonder what this will look like after a couple of years – probably not as bad as the LG Gram 2-in-1, but still.

Paint job aside, the Acer Chromebook 514 weighs a very spry 1.5kg and, as it measures a slim 17mm when closed, it will slip nicely into your bag and take up very little space.

You get two Type A USB ports and two Type C USB ports – handy if you’re using external drives or peripherals that use the older connection. The left-hand USB-C port supports Power Delivery, which, in practical terms, means it’s going to function as the port for the mains adapter most of the time.

You also get a microSD card reader, if you want to transfer folders or bolster that not-very-generous amount of local storage, a 3.5mm jack for headphones, and a lock slot. All of this is par for the course for most Chromebooks these days. 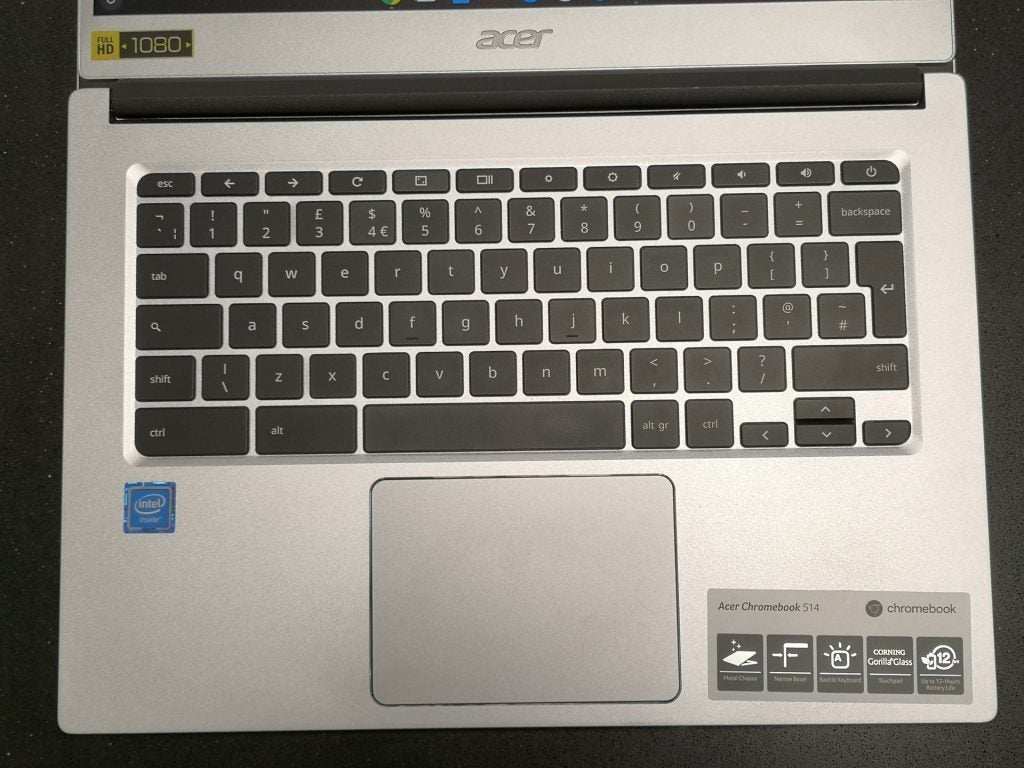 The Acer Chromebook 514’s keyboard benefits from the metal chassis, as there’s no flex here

Acer Chromebook 514 performance and specs – Does the basics, and only the basics

If your PC usage involves basic office work, checking emails and social, with a bit of YouTube rumbling away in the background, the Acer Chromebook 514 will do all of that well enough.

The keyboard layout is the same as every Chromebook, as is the typing experience. You get the same thin-feeling plastic keycaps here, with the same low travel and relatively low spring action – typing on the Acer Chromebook 514 is fine, but it’s not exactly snappy. The solid metal chassis, however, means that the deck around the keyboard is free from any obvious flex. The board is backlit as well, so working at night won’t be an issue.

The trackpad is well sized, responsive and accurate, if a little slow for my tastes, but nothing that some fiddling in the settings couldn’t fix. 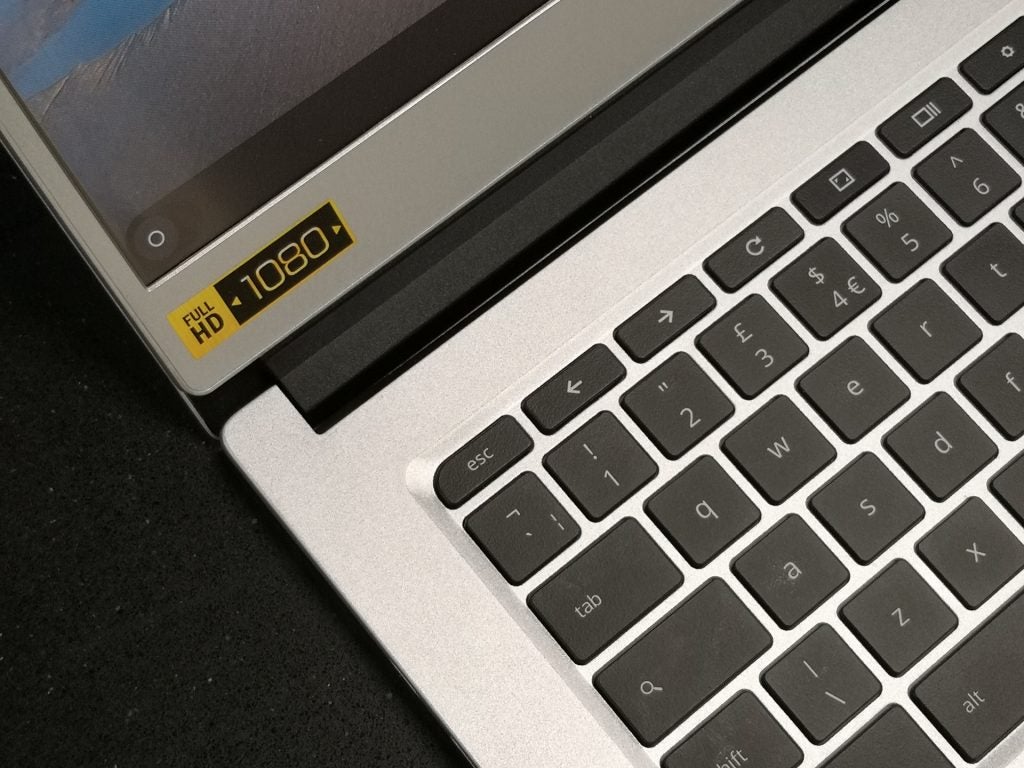 The keyboard layout is slightly different to a typical Windows laptop, but it won’t take long to get acquainted

If you need to edit photos, however, you’re not in luck. You can just about get away with cropping snaps in Photoshop Express on the Acer Chromebook 514, but the experience will most likely be frustrating. If you need a Chromebook to do light photo work, check out the Dell Inspiron Chromebook 14 7000 2-in-1 instead.

You should be judicious with your tab use with the Chromebook 514 – I tend to have no fewer than 10 tabs open in Chrome at any one time (with one of those typically YouTube on autoplay), and found that, on occasion, when writing documents, everything would slow to a crawl for about five seconds before easing up again here. Chrome can be very memory-hungry on Windows laptops, and you get 4GB of RAM to play with here – just get used to regularly closing and refreshing Chrome to keep things running smoothly.

Benchmarking options for Chromebooks are few and far between, but I was able to install and run Geekbench 4 for Android from the Google Play Store. Geekbench 4 features a CPU (central processing unit) stress test, and can give you an idea of how fast any system will run.

The Acer Chromebook 514 I tested featured an Intel Celeron N3350 dual-core processor with a 1.10GHz base clock speed.

It should be noted that the Inspiron Chromebook features an 8th gen Intel Core i3, which is a much more advanced processor than the Pentium chip of the Acer Chromebook 514, and the Celeron N4000 of the other Dell Chromebook.

In summary, while you can easily write, email, and crunch numbers on sheets on the Acer Chromebook 514, not all of the apps I tried to run worked. Netflix ran just fine and dandy, but while the Spotify app would install, I was greeted with a blank screen whenever I tried to run it. With such limited storage space, it’s unlikely that you’re going to be installing many apps on the Acer Chromebook 514 anyway. 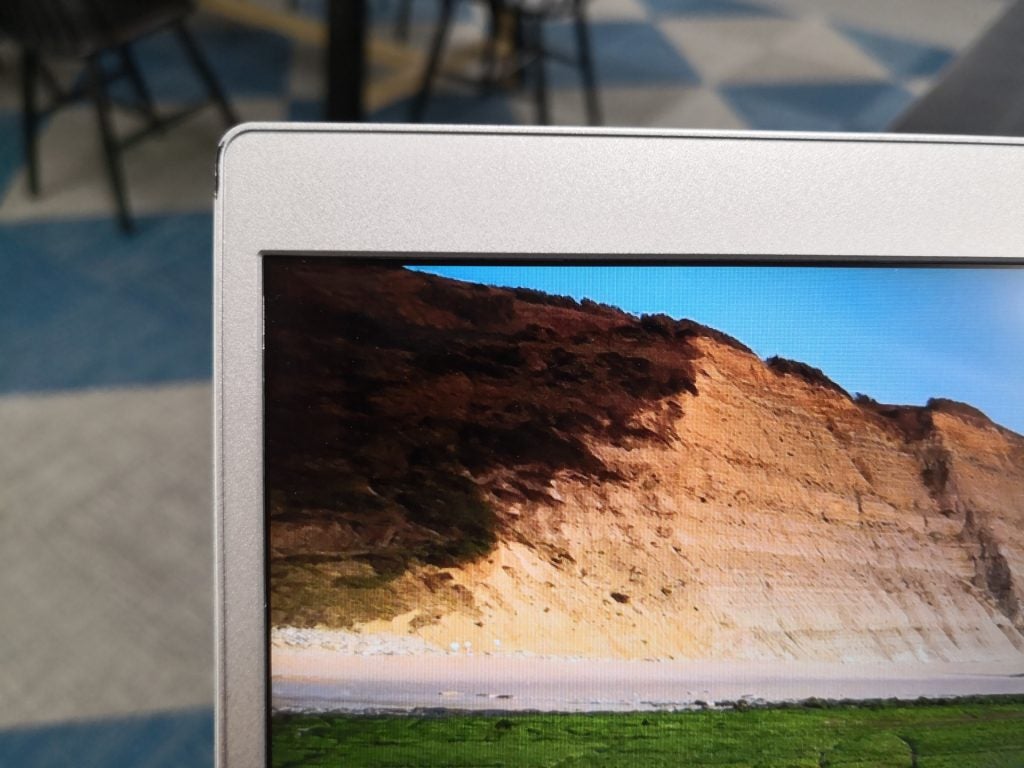 The Chromebook 514’s display is fairly middling, but the skinny bezel partially makes up for it

The Acer Chromebook 514’s 14-inch touchscreen display is not one of the brightest I’ve seen, meaning that Netflix and YouTube streams, particularly night-time/interior scenes, can sometimes look gloomy. Things aren’t so bad that they’re not viewable but the brightness, paired with not-fantastic viewing angles, limits the Acer Chromebook 514’s usability as a Netflix and chill companion. The display is also unsuitable for photo editing.

As we’ve already established, this Chromebook’s components struggled to run the most basic editing software, so the performance of the display in this regard is moot, but for what it’s worth, I recorded colour gamut coverage scores of 57.0% (sRGB), 39.6% (Adobe RGB) and 40.6% (DCI-P3), using DisplayCAL 3 and an X-Rite i1 colorimeter. That’s far below what you need if you’re looking to do photo editing of any kind.

With the same device and software, I recorded a maximum brightness of 257.9 nits. This will just about let you work comfortably in most lighting conditions, though you may struggle outside on a sunny day. Ideally, you want peak brightness of 300 nits. Black levels recorded at maximum brightness were 0.205, adding up to contrast ratio of 1254:1. That’s pretty good, and about what you’d expect from a decent laptop. I also recorded a colour temperature of 6212K, which, again, is very good, and close to the 6500K ideal.

In short, video streams will look good enough, but you’ll want to crank that brightness all the way up. Photo work? Forget it. 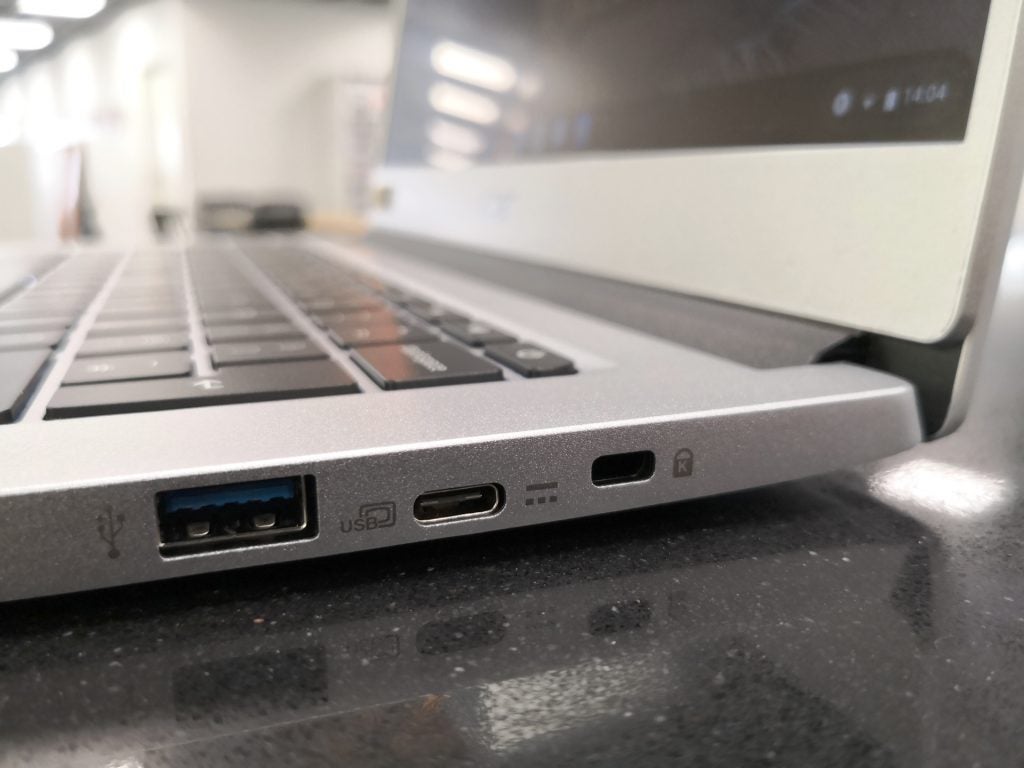 You can wring a working day’s amount of power – i.e. seven to eight hours – out of the Acer Chromebook 514.

Running the Geekbench 4 battery benchmark, which simulates basic PC use in the background with the display’s brightness locked at 150 nits, I got a result of seven hours and 21 minutes. That’s very much in line with what I observed day-to-day. If you can stand to dip the screen’s brightness below 150 nits then you can make it last even longer.

If you have to work away from a mains socket for a while, the good news is the Acer Chromebook 514 only takes about 90 minutes to fully charge up. From empty, I was able to get around 73-75% of the tank full after an hour on the mains. 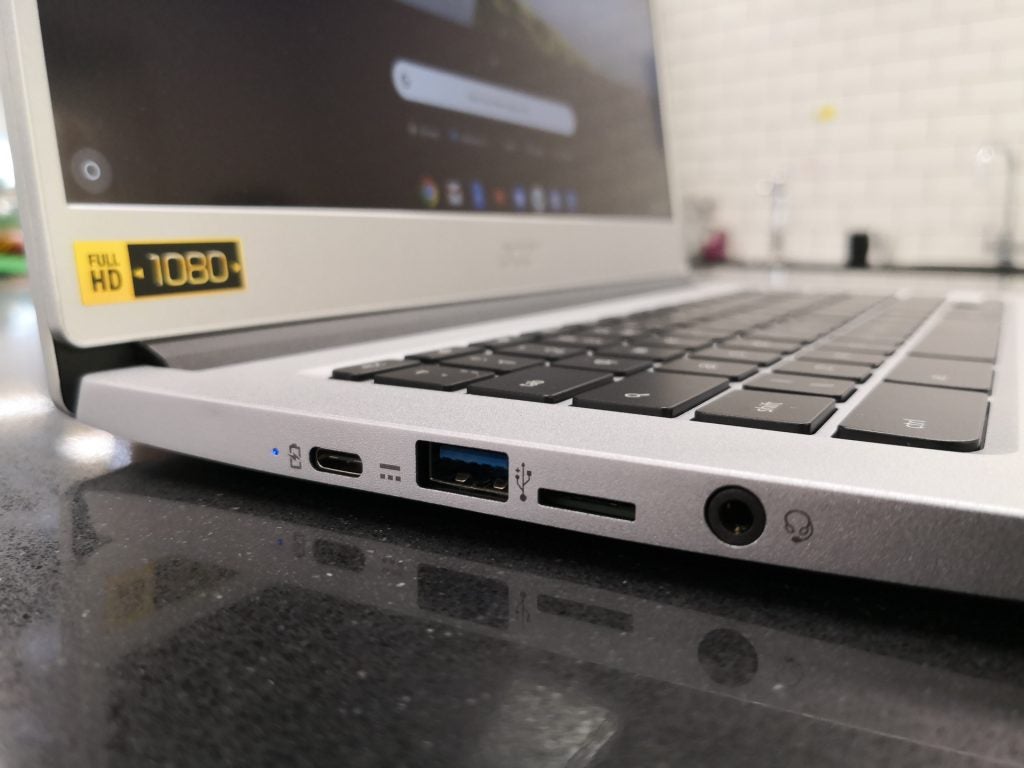 On the other side you get the other USB C and USB A ports, plus a microSD card reader and a 3.5mm jack

Should I buy the Acer Chromebook 514?

The Acer Chromebook 514 is great value for money. The model I tested is priced at £370 and is absolutely fine for basic PC work, and the metal chassis means it’s resilient and doesn’t look like a cheap laptop. There is also a cheaper variant (CB514-1H) which features many of the same specs, but a lower res (1366 x 768) non-touch display.

While the display isn’t perfect, it’s good enough for writing essays, and, at a push, streaming video.

You do have to be patient with the Acer Chromebook 514. If you throw lots of work at it at once – multiple tabs and YouTube streams, while trying to download several things from Google Play – it’ll falter.

But if you need an inexpensive laptop for word processing and you don’t want to shell out for Microsoft Office, then the Acer Chromebook 514 is an excellent option.

A nicely priced laptop in a metal case that’ll do the basics (and only the basics).