Dell proves that Chromebooks can be sexy and sophisticated with the Inspiron 14 7000 2-in-1.

The Inspiron Chromebook 14 7000 2-in-1 is a premium-looking laptop/tablet hybrid from Dell.

Sporting an aluminium jacket rather than the standard and cheap-feeling plastic you usually find on Chromebooks, the Dell Inspiron Chromebook 14 7000 looks and feels like a real cut above the rest.

Thanks to a rotating hinge, the screen can be pushed all the way back so the Chromebook 14 7000 can be held and used like a tablet, or propped up on your desk like a tent – or even used as a traditional laptop. Running Google’s Chrome OS, the Inspiron Chromebook 14 7000 is a lightweight and (relatively) inexpensive alternative to Windows 10 2-in-1s and convertibles.

Therefore, if you’re after something for lightweight PC work – in other words, writing, emails and streaming TV – that doesn’t cost the earth and doesn’t look like a cheapo bargain bin device, then the Dell Inspiron Chromebook 14 7000 2-in-1 could be your laptop of choice. 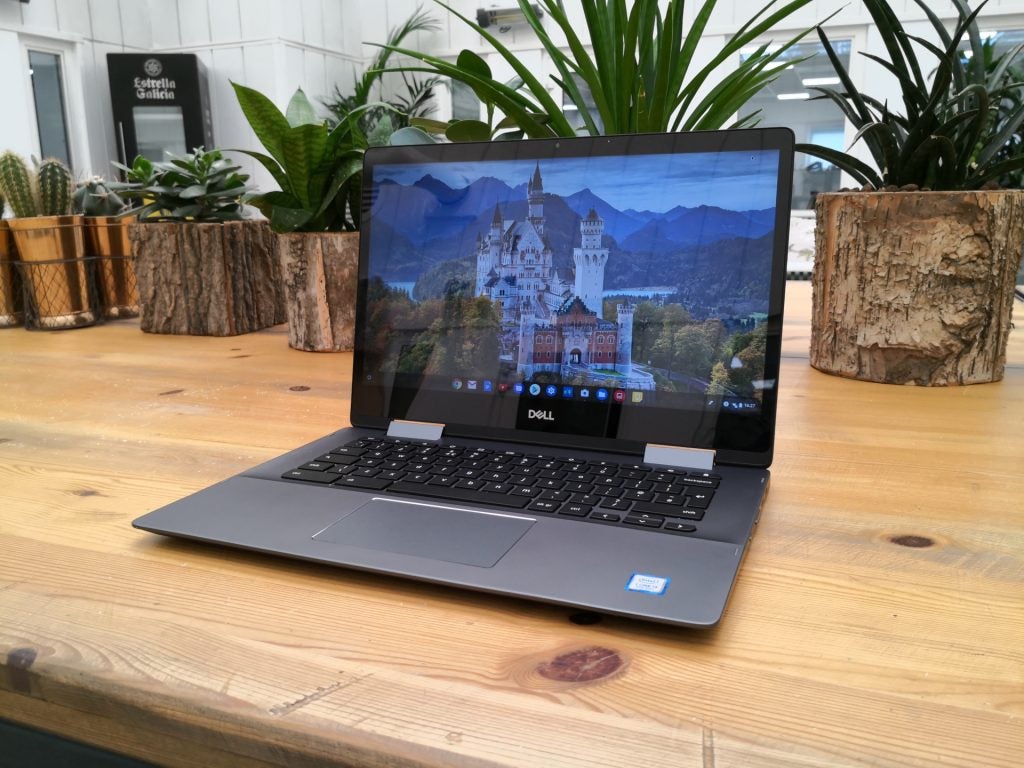 Yes it *is* a Chromebook – the new Inspiron 14 7000 is one of the nicest-looking laptops, Chromebook or otherwise, I’ve seen this year

If you’ve never picked up a Chromebook before, here’s a quick recap of what they are and what you need to know. Chromebooks are laptops and tablets which run on Chrome OS, a free operating system which, like Android, is based on the Linux kernel.

As Google makes Chrome OS freely available to manufacturers, there’s a cost saving here that’s usually passed on to the customer, one reason why Chromebooks are generally a bit cheaper than their equivalent Windows-running laptops.

Chrome OS also has a big ace up its sleeve in that access to Google’s suite of free productivity apps – including Google Docs, Google Sheets, and Google Slides – is baked right into the experience. You can jump into Google Docs from the task bar as soon as you’ve booted up your Chromebook, and start writing straight away. That’s a big plus for buyers on a shoestring budget – no more forking out for Office Home & Student or Office 365 subscriptions. Google also throws in 15GB of free Google Drive space with every Google account as well.

Historically, Chromebooks have not offered buyers the best build quality. While the displays have generally been good, the chassis have mostly been lightweight plastic which have tended to exhibit worrying levels of flex, especially around the keyboard. This is what the Dell Inspiron Chromebook 14 7000 2-in-1 attempts to change.

Rocking an aluminium chassis coated in matt grey paint and a 14-inch display with thin bezels (around 9mm), the Dell Inspiron Chromebook 14 7000 2-in-1 immediately inspires more confidence than your typical Chromebook does the moment you open it up. It’s smooth and cool to the touch, and weighs 1.8kg. That’s a little heavier than most Chromebooks, but even that feels like a good thing – its reassuringly hefty, rather than inconvenient. 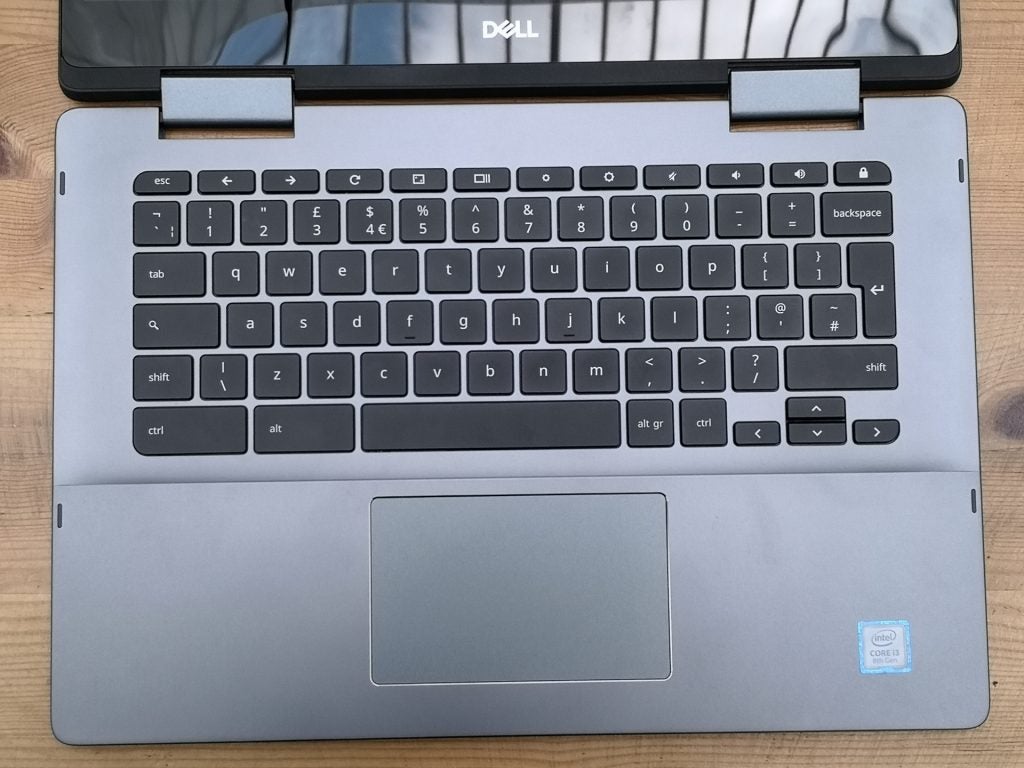 Not your typical keyboard layout. On the Inspiron Chromebook 14 7000, hold alt and press the trackpad to ‘right click’.

While the keyboard layout is the same as it is on every Chromebook, and the plastic keycaps feature that same mottled texture, the fact your palms rest on cool metal instead of tacky plastic immediately makes for a nicer typing experience. The trackpad is nicely sized and while I had to tweak the sensitivity to suit my tastes, I’ve found it’s as responsive as I’d like it to be.

The keycaps are not translucent either, but the whole board is underlit with a white LED array. While keycaps with see-through letter shapes would make it easier to locate specific keys if you’re working late at night or in a dark conference centre, at least you get some help here. 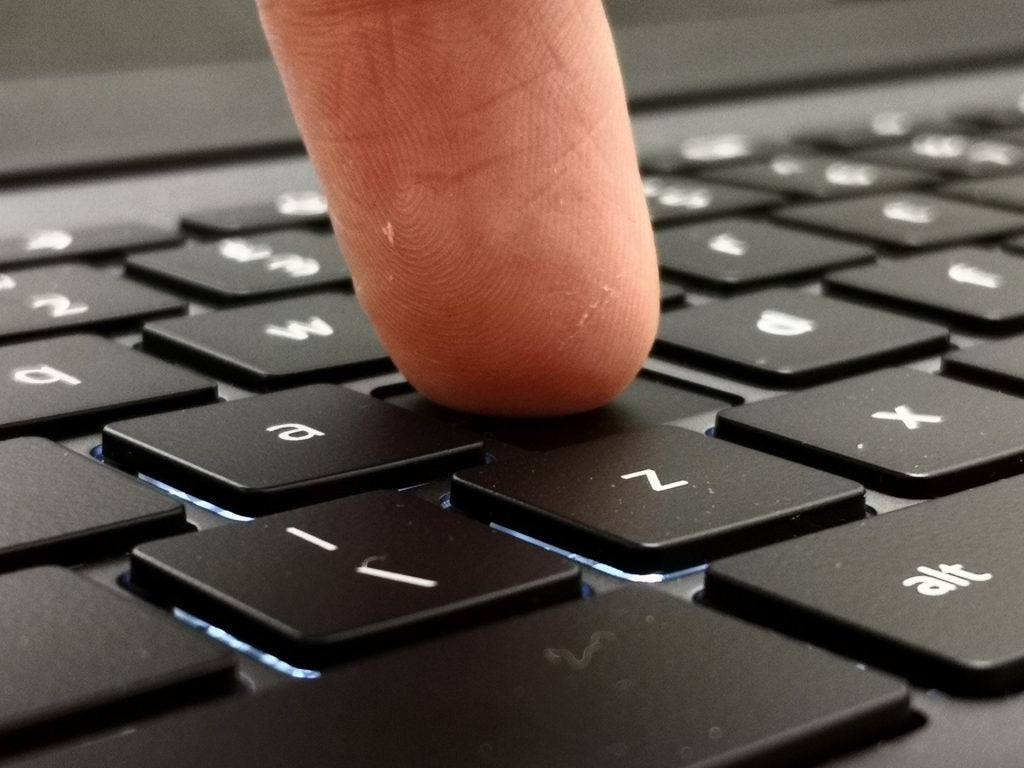 It’s a shame that the keycaps aren’t fully lit, but at least there’s some illumination here

Chrome OS-specific benchmarks are few and far between, so it’s hard to directly compare the Inspiron Chromebook 14 to similarly priced Windows laptops.

I can’t run anything like CrystalDiskMark or 3DMark, so I can’t comment on storage read and write speeds or graphical prowess. I was however able to run the Android version of Geekbench 4, which I installed via the Google Play Store. With this, I was able to run a basic CPU stress test, to give you an idea of how this compares.

Interestingly, Geekbench 4’s developer Primate Labs says that all scores, regardless of whether you’re running the software on a phone, tablet, or laptop, use the same single-core score of 4000, and a multi-core score of 8000, based on the performance of a 7th gen Intel laptop CPU – a Core i7-6600U with a 2.60 GHz base clock – as a benchmark for performance. This means the results you’d get from this can broadly be compared with what you’d get from the Windows version of Geekbench. 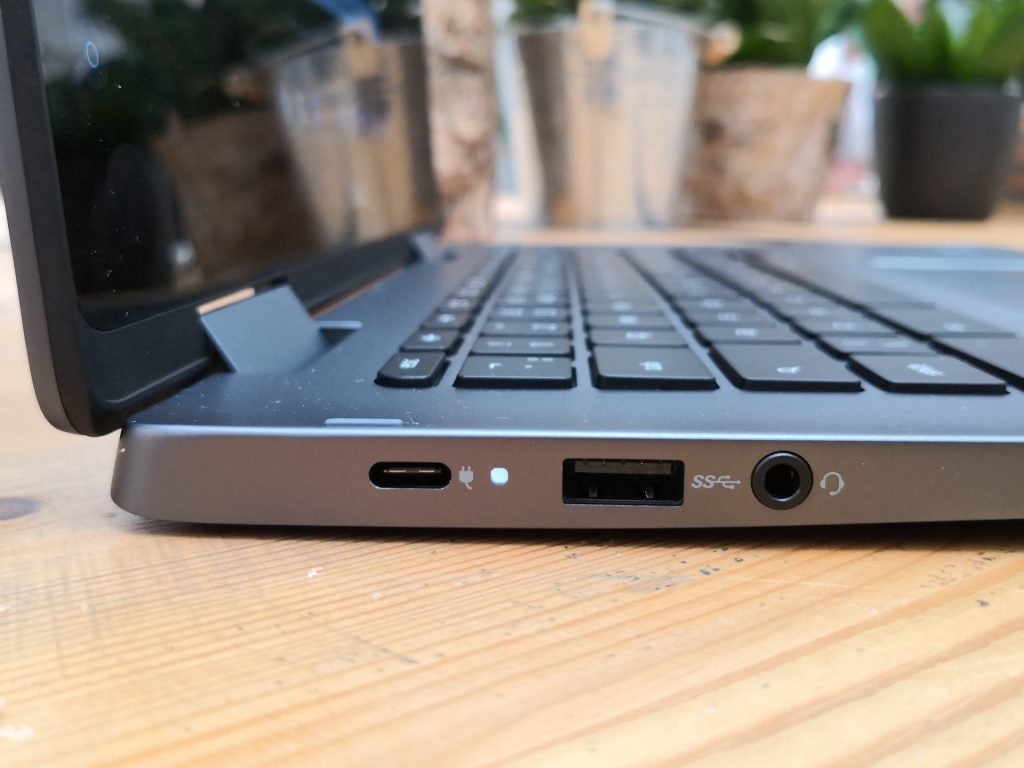 Without wanting to wax lyrical about processor specs too much here, you should note that most Chromebooks come with older and far less powerful Celeron and Pentium processors. The presence of an 8th gen i3 here is significant.

To round this out, I also ran Google’s Octane 2.0 benchmark, and scored 31575. While Google hasn’t maintained or updated Octane since 2017, I’m including the score here, as it may be useful when comparing this with the results of older Chromebooks. 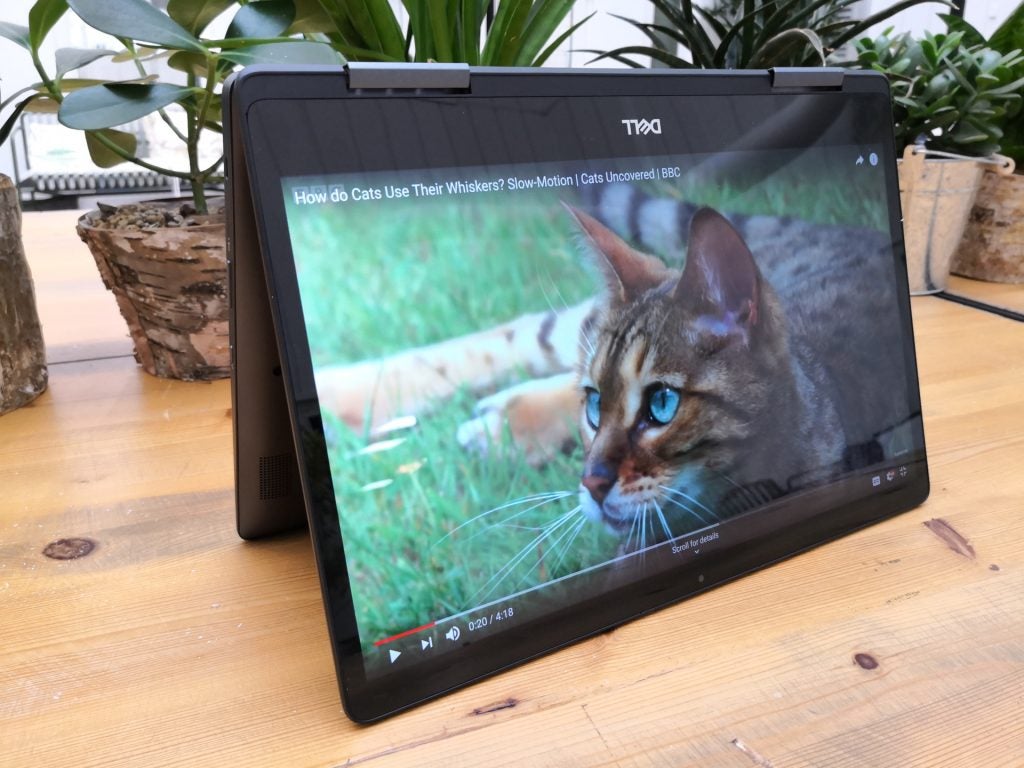 Speakers mounted on the underside mean media is best enjoyed in tent mode on a flat surface, as above.

Battery – Will the Inspiron Chromebook 14’s battery last all day?

The Inspiron Chromebook 14 7000 gave me between 8-10 hours day-to-day after spending a day in the office writing and filing articles, while listening to streamed YouTube and Spotify playlists.

Running the full discharge battery drain test on Geekbench 4 with the screen’s brightness set to 150 nits gave me 11 hours and six minutes. This software runs a number of artificial processes in the background, stopping when the battery hits the 5% mark.

I also saw a similar battery life figure – 10 hours and 33 minutes – when I looped a locally-stored 4K video sample with the screen brightness still locked to 150 nits and the volume set to 50% until the battery hit critical levels.

Powering the Inspiron Chromebook 14 back up from zero takes about two and a half hours. Using the supplied adapter, I was able to get the tank over 50% full after one hour on the mains. 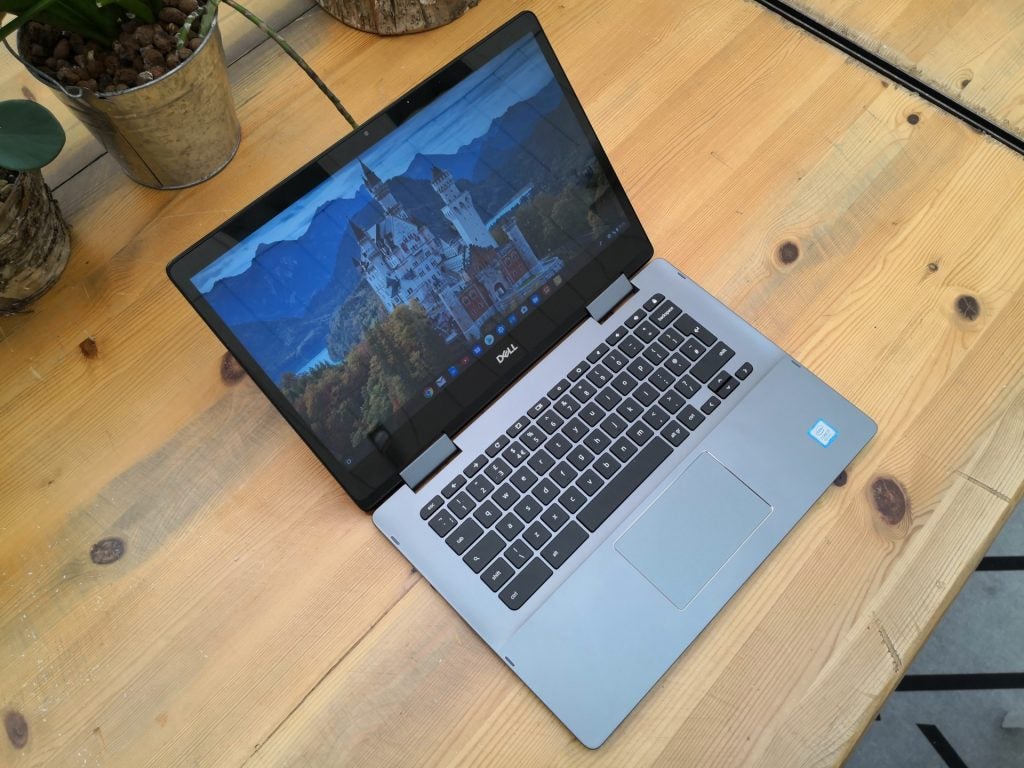 I’m happy to say the Dell Inspiron Chromebook 14 7000 2-in-1 features a pretty decent screen that’s fine for word processing and is good enough for simple photo and picture editing tasks.

There’s also an EMR stylus included here, which means you can jot down notes or make sketches on Google Keep – a shortcut to which launches whenever you remove the stylus from its underside-mounted sheath – or apps downloaded from Google Play, like Adobe Photoshop Sketch, SketchBook or Sony’s Sketch Draw & Paint.

The Full HD (1920 x 1080) resolution stretched across 14 inches means you get 157.35 pixels-per-inch (ppi) here, which is also what you’ll get on more expensive Windows laptops like the Asus ZenBook 14 Pro. Dell has also added a reflective glass cover to the display, which gives everything a lustrous sheen. On the flipside, it means that working outdoors, or in an office with harsh overhead lighting can be tricky.

My tests revealed the Inspiron Chromebook 14’s display is good – a cut above what you see on most Chromebooks, anyway.

Using an i1 X-Rite Display Pro and DisplayCAL 3, I recorded top brightness of 344.71 nits. With the brightness cranked all the way to the top, I recorded a black level of 0.255 nits, adding up to a contrast ratio of 1351:1.

In plain English, this means that the Inspiron Chromebook 14’s display is decent enough to work comfortably on in a number of lighting conditions. With the exception of the more expensive Google Pixel Slate, and PixelBook, most other Chromebooks won’t come close to offering that level of punch or contrast.

Colour gamut coverage is good too – the Inspiron Chromebook 14 covered 83.2%, 58.3% and 60.1% of the sRGB, Adobe RGB, and DCI-P3 colour spaces respectively – and I recorded a slightly bluish daylight colour temperature of 6997K.

In layperson-speak, this means websites, games and other digital graphics will look pretty accurate. The sRGB (standard RGB) space is what most digital artists and web designers use, and generally speaking, anything giving you over 80% coverage is good.

The wider Adobe RGB and DCI-P3 colour spaces are favoured by digital photographers and videographers respectively. The scores here are low, but that’s not really an issue sine this machine isn’t powerful enough to run something like full fat Adobe Photoshop or Premiere Pro.

It is however good enough for the most basic kind of photo editing, and given the current level of app support you get from Chrome OS, that’s probably just as well. 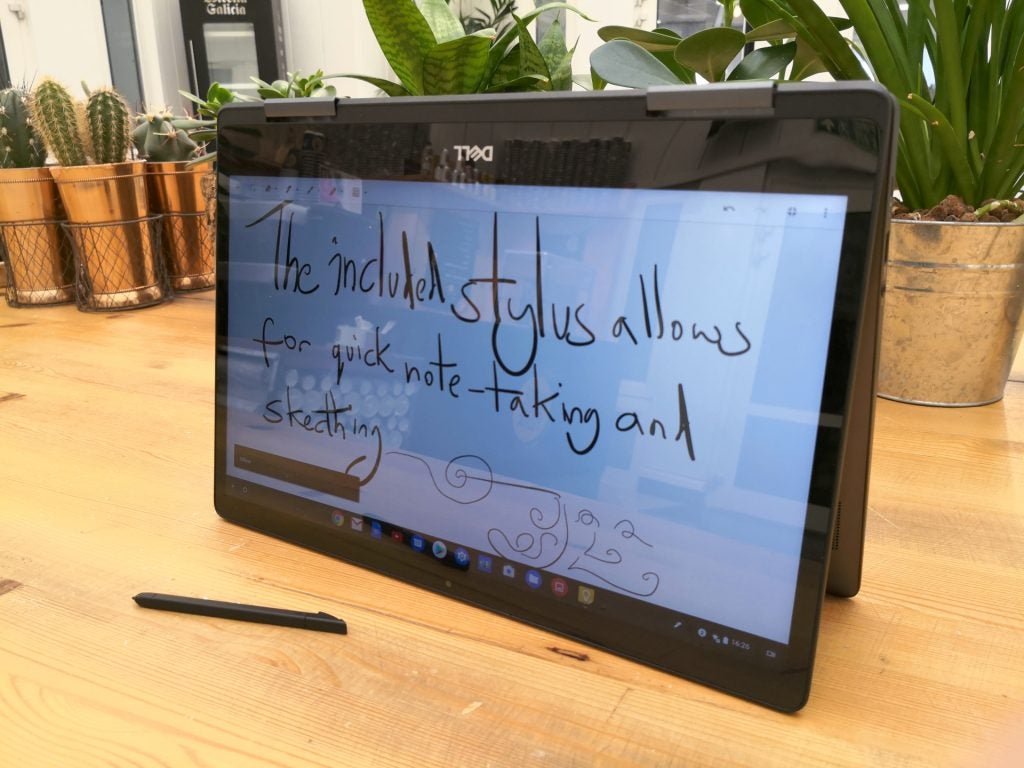 The lack of a dedicated graphics processor means you wouldn’t want to use the Inspiron Chromebook 14 for digital art – but for quick sketches and notes, it’s fine.

App support for Chrome OS is limited, but since 2018, you’ve been able to install some Android apps on Chromebooks via the Google Play Store.

The key word here is ‘some’. Slack works, but the UI is designed for phones, which means text looks tiny and images look huge. I couldn’t get WhatsApp to work, but you do get Android Messages built into Chrome OS – which lets you send text messages via your desktop – so if that appeals, at least you’re not entirely cut off from that experience.

I had success in getting free image editing apps Pixlr, Adobe Photoshop Express and Adobe Lightroom to work. You’ve only really got enough processing power for basic photo editing here – cropping, resizing, adding filters, etc – and that’s exactly what you’d want to use these apps for, so that’s perfect.

Gaming is more of a hit and miss affair, mostly the latter. It looks like games that have been optimised for tablets tend to work best here. Candy Crush Saga plays as it should, but the likes of Drop 7 don’t give you any fullscreen action, and strategy games Polytopia and Civilization Revolution 2 just don’t work at all.

Full HD streams on YouTube, Netflix and iPlayer content all loaded quickly and again, thanks to the screen, looked great even at night. The positioning of the speakers – two downward-facing speakers on the underside – mean that unless you’ve got it propped up on a solid desktop, audio is going to be muffled. Sound quality is generally pretty good, though at high volumes (above 75%) high end noises exhibits obvious distortion. 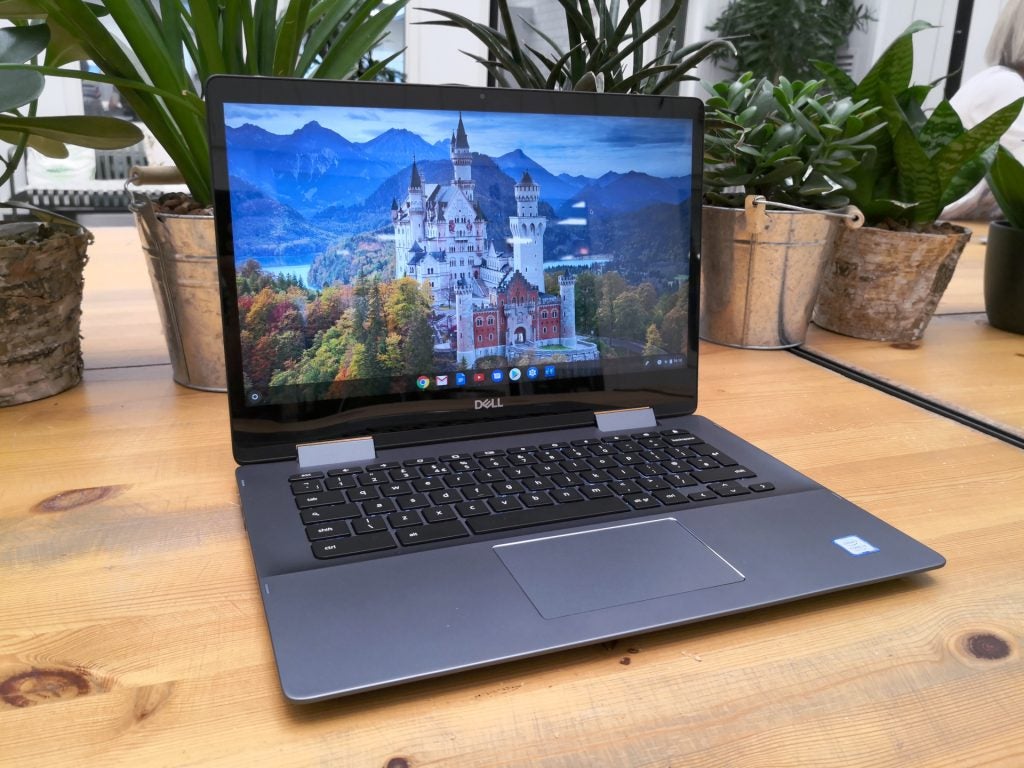 The Dell Inspiron Chromebook 14 7000 2-in-1 is excellent value for money, easily one of the best Chromebooks I’ve tested.

Priced at £650, the Inspiron Chromebook 14 is more expensive than your average Chromebook, which will sit somewhere in the £300-£500 price bracket.

While Chrome OS is good enough for people who mainly need something to write essays and reports on, the operating system still doesn’t enjoy the same level of support that Windows machines do. You won’t be able to install as many programs or play as many games.

Depending on your needs, that might not be a dealbreaker. For basic computing tasks, the Dell Inspiron Chromebook 14 7000 2-in-1 is more than adequate, offering buyers excellent battery performance, a great display, and a premium, sturdy design, all for a reasonable price.

One of the best Chromebooks we’ve tested, but it’s a little pricey by Chromebook standards, and Chrome OS isn’t as well supported as Windows.