The Dell Chromebook 3100 2-in-1 is a low power Chrome OS laptop designed for education. The rugged design is a key selling point that ensures it'll serve even the most accident-prone students, but its low end components mean anything but basic document editing and web browsing is beyond it.

Outside of Google’s Pixel line, Chromebooks aren’t that glamorous – and that remains the case with the Dell Chromebook 3100 2-in-1.

Like similar education-focused Chromebooks before it, the Dell Chromebook 3100 2-in-1 unashamedly puts function over design and visual flare – it’s wrapped in chunky black plastic and has a 360 degree hinge, which lets you fold it into tablet or have it sat on your desktop, which feels solid and robust.

This combined package ticks enough boxes for the Dell Chromebook 3100 2-in-1 to be a solid choice for school kids in need of a borderline-unbreakable study aid. For older students and general laptop buyers, however, there are better value options available.

The Dell Chromebook 3100 2-in-1 is not the prettiest machine you’ll find, even by Chrome OS laptop standards. Opening up the clamshell, you’ll be treated to a giant 2cm bezel straight out of the 1990s, plastic chiclet keys and a chunky chassis with rubber edges.

But that’s intentional, as Dell’s built this convertible Chromebook to be as rugged as possible. Dell says that it meets MIL-STD specification, a standard set by the US military that you don’t normally see on a consumer products – the LG Gram 14 and the Samsung Galaxy Tab Active 2 being other exceptions.

Dell says that the Chromebook 3100 2-in-1 has been tested to survive 5000 micro-drops and 30-inch drops onto steel, so it ought to be tough enough to withstand classroom wear and tear. That said, the small-print on Dell’s website says that the standard warranty “does not cover problems resulting from accidents such as drops” – so keep that in mind. 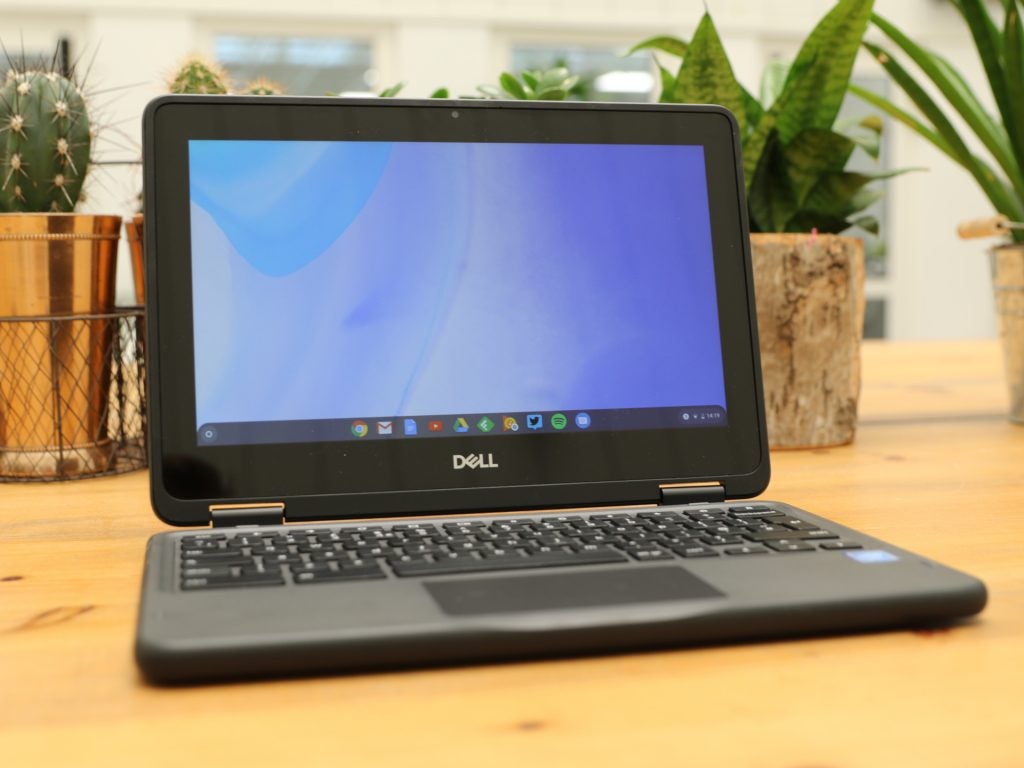 It might not look like the nicest laptop ever, but the Dell Chromebook 3100 2-in-1 wasn’t designed to win beauty contests

It’s also why the Chromebook 3100 is so chunky and has rubberised sides – it’s literally got shock absorbers. During testing I found the Chromebook’s 360 hinge is particularly well built. It doesn’t look pretty, but it has a solid locking mechanism and offers next to no flex, even when met with moderate force.

The splash-resistant keyboard also continued working after an accidental office coffee spill. As a final test, having “accidentally” dropped it onto a hardwood kitchen floor and let a rampaging four year old use it as a WWE-style steel chair on one of her enemies (a parents’ unsuspecting leg) I can personally attest to the Chromebook 3100’s durability.

Despite it being designed to withstand a beating, the whole thing weighs just over a kilogram (1.41kg), so it’s light enough to be dropped into a backpack and carried around all day.

Dell’s also done a reasonable job loading the Chromebook with all the ports a typical schoolchild or student will need. Around its sides you’ll find two USB-C, two USB-A ports and a single microSD card reader – all you need for transferring files and photos. 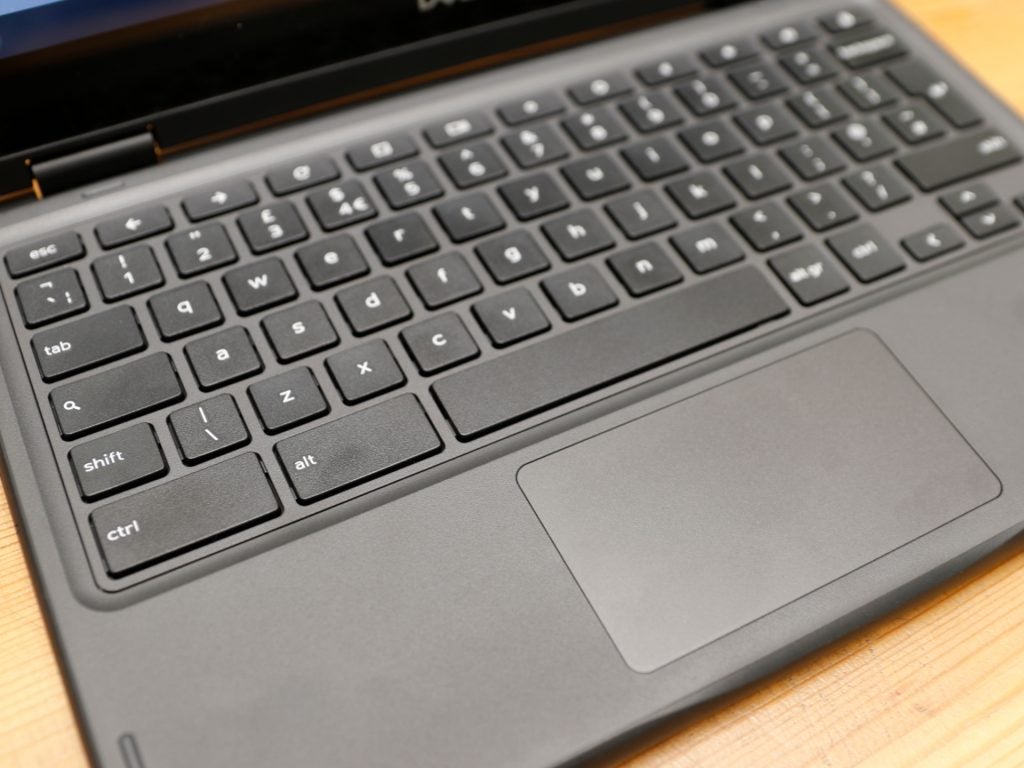 The keyboard doesn’t win any awards here, but it’s also basically the same as what you’d get on most other Chromebooks

So far so good? For the most part, yes. But be warned, outside of its ruggedness, the Chromebook is otherwise a very basic device and comes with a couple of compromises which hinder its usability as a day-to-day laptop.

Under the hood, the tech running the show is very basic, even when compared to equivalently priced Windows laptops, regardless of which of the configurations you pick.

This is largely because every option runs using a low powered Intel Celeron N4000 CPU. From there you have a choice of 4GB (in the case of the model we tested) or 8GB of LPDDR4 memory and between 34GB and 64GB of eMMC storage.

To non-techies, these are very low power parts. The light system requirements of Google’s Chrome OS mean general things, like web browsing and document editing, work just fine but even basic photo editing in Pixlr could cause the machine to stutter. This was reflected in the device’s Geekbench 4 scores, which put it on a par with an affordable smartphone when it comes to performance.

Chrome OS is great if you primarily use Google apps – like Google Docs and Google Sheets – as it offers a stripped down and streamlined interface that’s based around the tech giant’s services. There’s no need to fork out for Microsoft Office licenses here.

But, it is still limited compared to full fat Windows and won’t let you install third party apps. Everything has to be downloaded from the Google Play Store. I’m also not convinced Chrome OS takes full advantage of the Chromebook 3100 2-in-1’s touch screen functionality and tablet mode.

Most Chrome OS apps aren’t touch optimised. If you want to use it this way you’ll generally be better off installing an Android app from the Play Store, but this can be a risky gamble as not all the apps have been properly optimised and offer fairly buggy user experiences. Apps from smaller developers regularly crashed and I couldn’t even get Photoshop Elements to work to a satisfactory level on the Chromebook 3100 2-in-1 during testing. 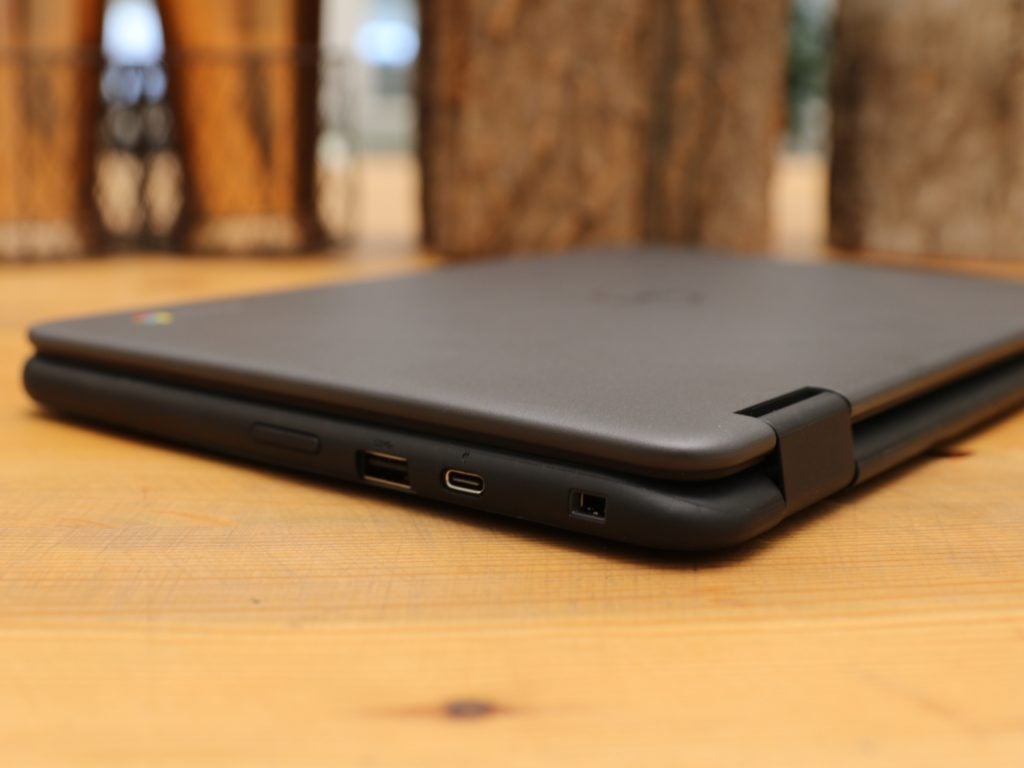 Older buyers or students should also be aware that the device’s compact dimensions, small screen and less than stellar keyboard mean can make for an uncomfortable working experience during prolonged use.

The display’s brightness and battery life partially make up for this and reinforce its status as an education product. The 274 nits max brightness I detected during testing is good enough for the screen to remain legible in most conditions, outside of direct sunlight – in these conditions the Gorilla Glass coating can get fairly reflective.

Buyers of a laptop like this are unlikely to care about such findings, but they’re worth including, if only so you can see how good the display of something like the Dell Inspiron Chromebook 14 7000 2-in-1 is by contrast.

The chiclet keyboard also feels cheap to touch and is one of the only parts of the device that feels flimsy, offering poor travel and a spongy feeling actuation point. This is also typical of Chromebooks, and is not a failing of Dell, per se.

Running the Geekbench 4 battery benchmark, the Chromebook 3100 2-in-1 lasted around eight hours with the screen set to 150 nits brightness, the level most people will feel comfortable using in a classroom or lecture hall. This is quite a lot less than the quoted 13 hour battery life, but I found it performed noticeably better with real world use. With regular use I easily got a full nine-to-five work day out of the machine with change to spare without having to reach for the charger. 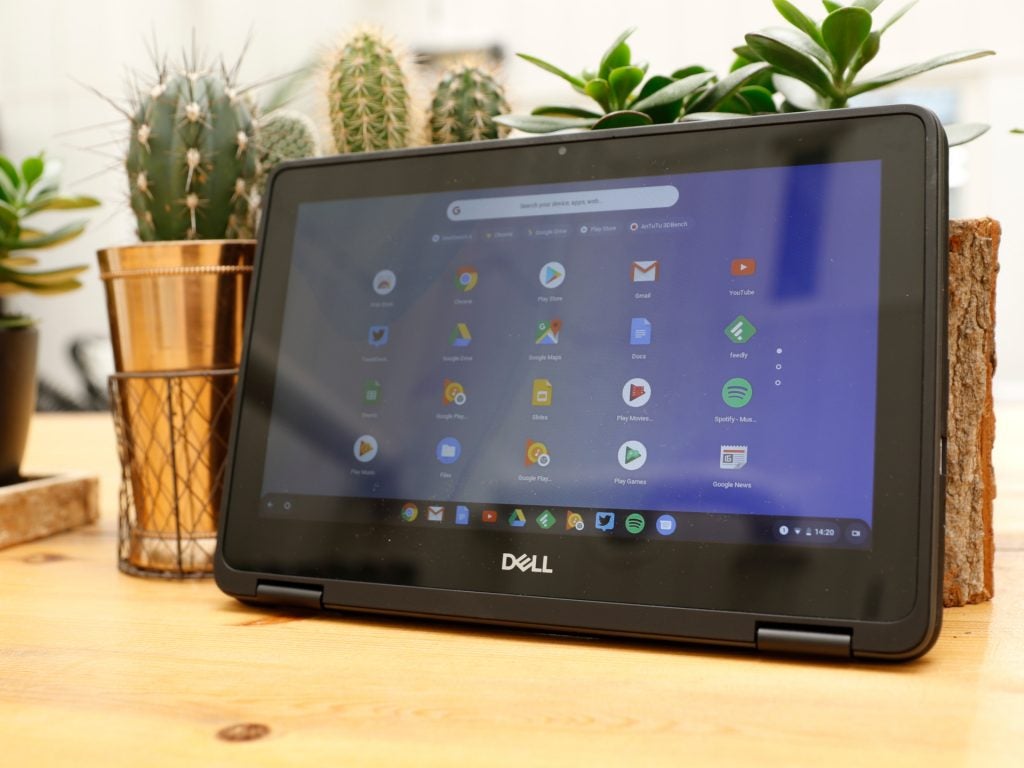 If you’re looking for a rough, tough Chromebook for your kid to take to school, or are an accident-prone student in need of an essay writing station that won’t break anytime soon, then the Dell 3100 2-in-1 is an OK option.

Outside of the keyboard, the device feels close to indestructible, is powerful enough for basic essay writing and web browsing, and has a long enough battery life to last a full school day.

The only downside is that it’s screen is a little on the small side and it’s low power components mean it can struggle with even basic photo editing. The £400-plus price is also fairly high for a Chromebook. If you don’t need the rugged design there are better value options in both the Chrome and Windows ecosystems.