Part of me wants to run counter to all the hype surrounding this game. “Look” I want to scream “It’s just another rooms and corridor 3D shooter. It isn’t doing anything that revolutionary. The AI isn’t as good as F.E.A.R. Half of the gameplay is straight out of Deus Ex and System Shock 2. The DirectX 10 enhancements aren’t all that great. Isn’t all the waffle about interactive art and moral choices getting a little bit out of scale?” 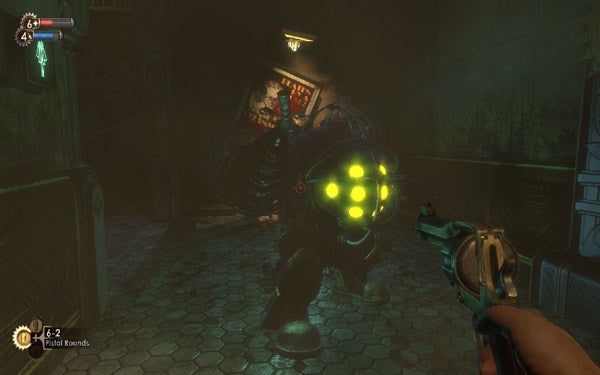 But the simple fact is that I can’t. Bioshock isn’t a game you can compare with others in terms of technical features, graphics and AI. The only way you can judge it is to take the experience as a whole. And frankly, on those terms, it’s out in a league of its own.


By now, you’re probably at least dimly aware of the basics. The game takes place in Rapture: an undersea city built as a utopia by a rich industrialist and a gaggle of intellectuals looking to escape the political and moral strictures of the surface world. Sadly, Rapture’s dream has gone horribly wrong. A mixture of deep-set corruption and dangerous substances has brought about its ruin. As you – the lone survivor of a mid-Atlantic aircrash – enter, Rapture is falling apart. Its tunnels are collapsing, leaks are everywhere, and its denizens have gone utterly, barking mad, splitting into gangs of ‘splicers’ who roam the halls and corridors in search of ‘plasmids’, ‘Eve’ and ‘Adam.’ 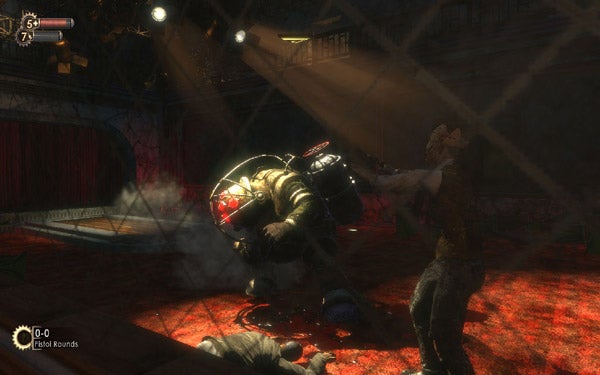 Here things get a little murky. To survive in and escape from Rapture, ordinary weapons are not enough. For one thing, ammo is hardly in plentiful supply. For another, the splicers are so numerous and ferocious that it’s hard to pin them down with bullets alone. The only way to stay alive is to use the plasmids, genetic enhancements that enable you to harness the forces of fire, ice and electricity, create air traps or enrage splicer gangs so they fight one another, or use telekenisis to catch and throw objects around the room. 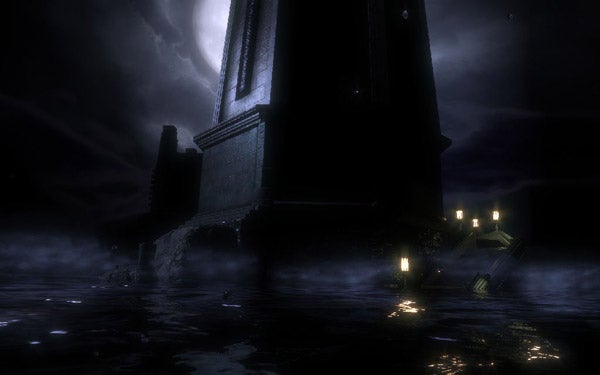 The problem is that plasmids rely on supplies of Eve to keep running, and on Adam if you want additional powers or upgrade your existing ones. Eve can be found just about everywhere, but Adam is a little more tricky. The only reliable source is to ‘harvest’ it from Little Sisters: the weird, child-like creatures you’ll see wandering around. This leaves you with two dilemmas. The first is physical – the Little Sisters are guarded by Big Daddies, hulking, armoured automatons with formidable offensive capabilities. The second is moral – is it ever right to do away with something that looks like a little girl, even if you’re told they’re not human and you never actually see what ‘harvesting’ entails?

All this is only the beginning, and I desperately want to avoid telling you anything that might spoil the experience for you. The storyline here isn’t imposed on you in countless cut-scenes, which are used sparingly and from the same first-person perspective, when at all. It’s drawn together from a dozen or more recorded voices, from the radio messages sent to you by the main cast of oddball characters, and just from the jingles, posters and public announcements that haunt Rapture’s private places and abandoned public spaces. If you just want to shoot things and destroy them in ever more inventive ways, Bioshock lets you wreak havoc with a vengeance, but there is something deeper going on here. I’ve played games where I’ve been gobsmacked, pumped with adrenaline or shivering with fear, but I haven’t encountered many that can manage to shock or disturb; that can make you feel pangs of guilt or pity or even something approaching tenderness. It’s not simply a case of creating atmosphere – Bioshock wants you to connect both emotionally and intellectually with its world. 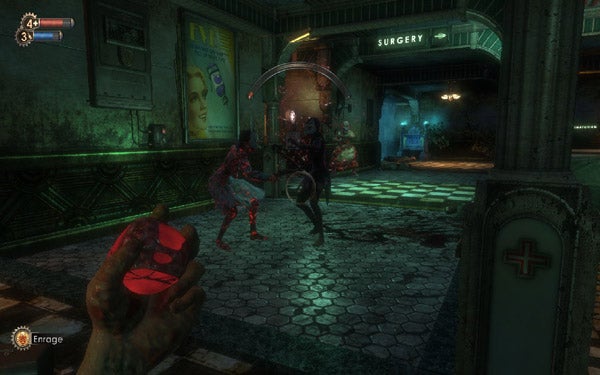 Doing so isn’t difficult. Running on a tweaked version of the Unreal 3.0 engine with a lot of heavily customised shaders, Bioshock has to be seen to be believed. The water effects have got a lot of attention, and quite rightly so: the ripples that cloud your vision when you step through a sheet of pouring water is going to be imitated a lot over the next twelve months, and the reflection and displacement effects are completely and utterly wondrous. The lighting, too, is beautiful, with everything illuminated by harsh incandescents or an understated neon glow. Yet none of this would matter without one of the most cohesive and constantly impressive prolonged feats of production design I’ve ever seen in a video game. 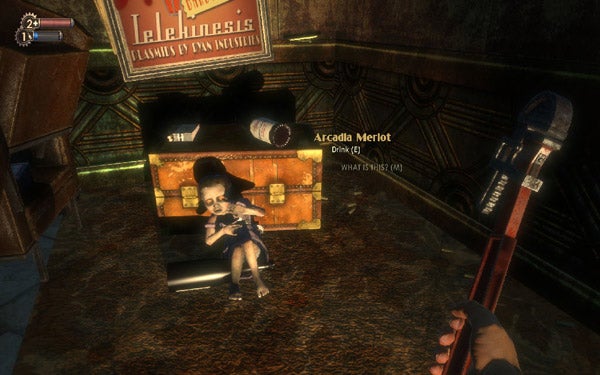 From the masks and costumes worn by the splicers to the art deco architecture and the authentic period furniture littering every room, Rapture feels like a real underwater city in an advanced state of decay. While other FPS developers seem stuck in a stagnant relationship with industrial landscapes, jungles, barrels and crates, or forever feeding off inspiration from Aliens or The Matrix, the Bioshock team have let themselves go and create a world all of their own imagining. It draws on the work of Ayn Rand, the architecture of pre-War New York and the designs of Nazi architect, Albert Speer, but at no point does it feel totally indebted to any one influence. What’s more, the game packs in more variety than you might expect, with the glossy civic areas of Rapture covering a number of industrial zones, and some surprisingly beautiful scenery in the areas designed for leisure purposes.

What’s more, you can’t ignore the cinematic skill with which it’s all presented. Other games – The Darkness, Half-Life 2: Episode 1 – have done wonders with décor, lighting and motion to create a brooding tension or a sudden feeling of deep unease, but Bioshock takes it to a whole new level. This, you can’t help feeling, is what a truly great game is meant to be: not some dozy semi-interactive movie, but a world where your interaction is the biggest part of a rich, fully-realised experience. 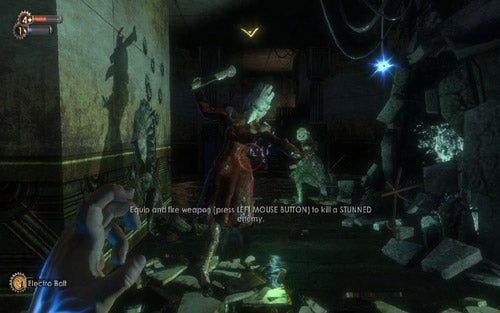 Kudos, too, to the audio team – so much of Rapture’s rich atmosphere is conjured by the period music sounding out from slightly tinny speakers, or from the evocative voices that rise from abandoned recordings, or the radio messages that dish out guidance, mockery or assistance. In the early stages of the game, the mad mutterings of the various lurking splicers are a constant source of terror, to the point that the sudden appearance of the blood-crazed freak is practically a relief. And the lines they utter when they’re standing over your twitching corpse are packed with pitch-black humour.


You’ll get the latter more than you might like, but don’t worry. Bioshock eschews checkpoints or the usual save/reload nonsense in order to keep you constantly in the game and in the world. On dying, you instantly respawn with meagre quantities of health and Eve in a local ‘Vita-chamber’, meaning you don’t lose anything but your self-respect and a little time while you retrace your tracks. This is typical of the way the game handles its mechanics. You don’t organise your plasmid powers and passive abilities by pausing the action and going into some arcane status screen – you find a machine and get it to reprogram your mind and body. You can buy health and ammo from vending machines, or upgrades from a gatherer’s garden. At times, you can almost forget you’re playing a game. 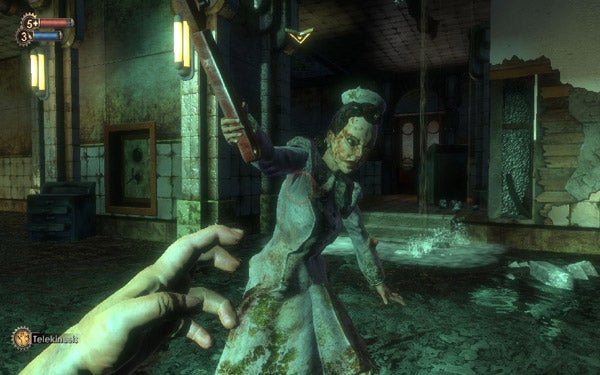 And like Deus Ex, Thief and System Shock, Bioshock gives you freedom to do things your own way. It’s only on a second play through that you’ll truly realise how much scope the Plasmid system gives you to create your own character to match your own style and play. You scan specialise in hacking machines and security systems (done through a simple pipeline puzzle game) or in melee combat or in offensive Plasmid-based techniques. You can try to play using stealth, cunning and misdirection, or you can simply concentrate on all-out assault. As with Deus Ex, if you play through just the once you’ll only get to grips with half the game, if that.

Some people have a lukewarm response to the combat, but I think the creative use of Plasmids and the sheer viciousness of the splicers – particularly later variants tooled up with Plasmids of their own – makes up for the lack of what you might call advanced collaborative AI. 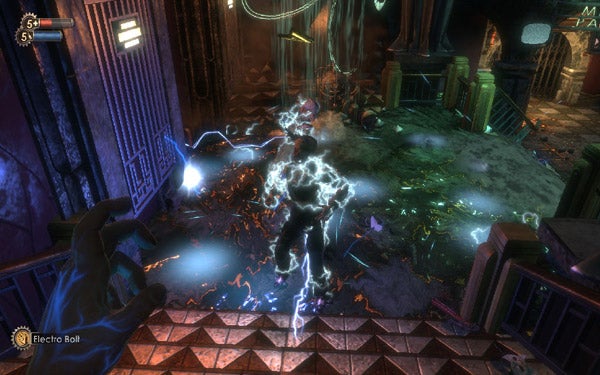 To be honest, if you can play Bioshock and you choose not to, then you’re as mad as the nuttiest splicer Rapture holds. Have your head examined before it’s too late. On the 360 it’s a no-brainer, and on a moderately specified PC – in one case an Athlon X2 3800 with an ageing Radeon X1800 GPU – a few detail concessions result in a smooth and still stunning experience. I was lucky enough to try it on a Quad Core system with an Asus GeForce 8800GTX, and it’s easily the best thing that I’ve ever seen. 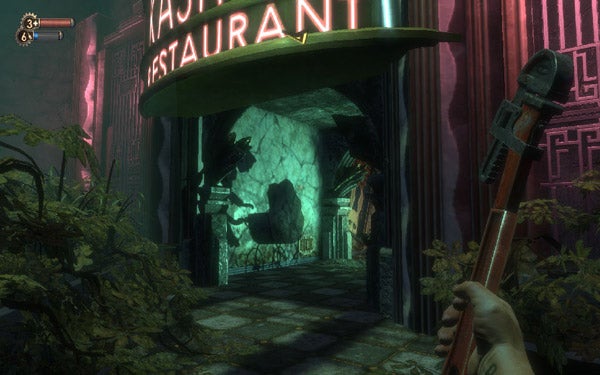 Yet at risk of reiterating a point, it’s not the technology that matters here, but the fiction. Moments of Bioshock will haunt me for months to come, and I don’t believe for a second that I can resist Rapture’s lure and not return. Only time will tell where Bioshock sits in the pantheon of all-time greats, but if you buy one game this month, this year – let’s be clear, this whole decade – this is the one you shouldn’t miss.


The finest game of the current generation. Other games may match or surpass it on technology or features, but it’s hard to imagine anything competing in terms of storytelling prowess or overall vision. A masterpiece!