What is the CyberPower Syber Steam Machine I?

Alienware isn’t the only manufacturer in the Steam Machine business, with several rival systems making their debut in the States and Cyberpower releasing a series of Syber-branded Steam Machines here. 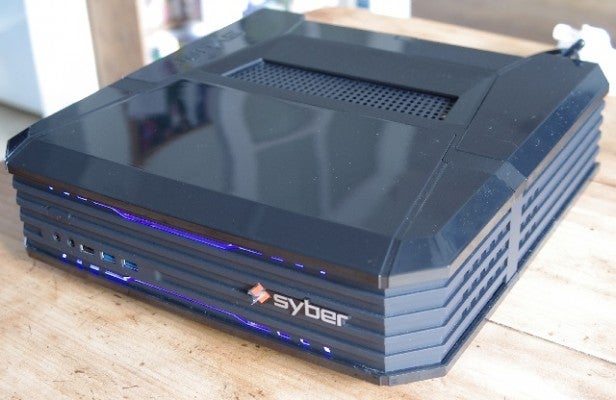 While the Alienware Steam Machine is a tiny, discrete, GPU-constrained system, the Syber is a very different kettle of fish. It’s a big, shiny black box with glowing coloured bars running almost the whole width of the front panel, and the largest games machine I’ve ever had sitting under my TV – even bigger than the original Xbox (the one Japanese pundits mockingly described as ‘the coffee table’) let alone the Xbox One.

On the plus side, after an initial roar of fans it’s relatively quiet, only really picking up the noise levels once you start pushing the CPU and GPU hard, at which point it’s significantly louder than the traditional consoles, though not most games PCs. 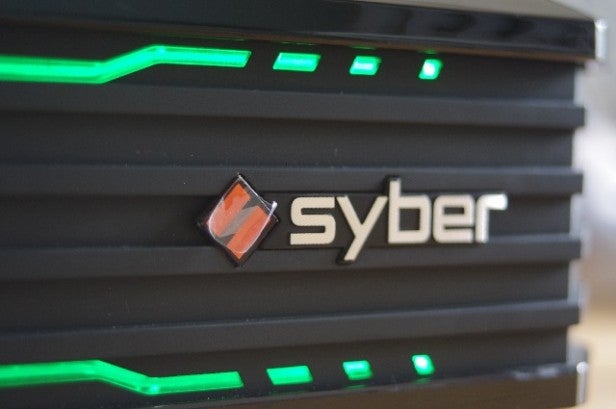 There are advantages to this design, even if you’re not one for long glowing strips. Did I mention that you could change the colour just by pressing a button on the side? With the case and a mini-ITX motherboard there’s room for a whole lot of connectivity, including two USB 3.0 ports and one USB 2.0 at the front, a further two USB 3.0 and one USB 2.0 at the rear, audio sockets front and back and the standard DVI, HDMI and DisplayPort outputs on the back of the MSI GTX 950 OC graphics card.

Secondly, there’s space in the Syber for more powerful components. The GTX 950 and Core i3 might be fairly modest parts by Windows gaming standards, but there’s plenty of evidence that this combo can match and even beat the PS4 and Xbox One for frame-rates and/or detail levels on cross-platform games – at least on Windows. What’s more, you can customise every aspect of the system when ordering, switching the GTX 950 for a GTX 960 for just another £21, or even opting for a Radeon R9 380 instead, for around £22.

Finally, you always have the option of opening the case and upgrading
later. The lid removes pretty easily once you remove the tab that
conceals the single Philips screw that holds it on. It’s a tidy build,
the hard drive sits on an easy-to-shift tray, and switching out the
graphics card or adding RAM won’t take you too long, either. The AsRock
H81M motherboard supports socket 1150 processors up to the Core i7-4790K
and there’s space for a GTX 970, so there’s room to turn your Steam
Machine from a budget gaming system to a beefcake, once future games
demand or finances allow. That’s one advantage that neither the
Alienware Steam Machine nor the Microsoft and Sony consoles can claim. 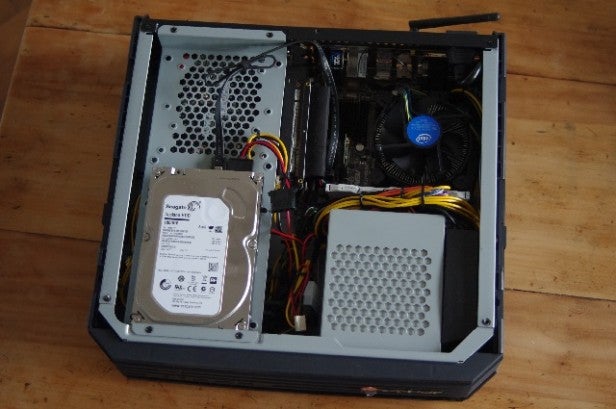 Now, we won’t go into too much detail about Steam OS and repeat what we’ve already said in the Alienware Steam Machine review. The Syber system has the same software and controller and exactly the same strengths and weaknesses as the Alienware Steam Machine. We did, however, have more problems with the Syber. We’ll blame early teething troubles, but the system arrived with its wireless LAN card non-functional and we experienced the odd crash bug in games, specifically Dying Light and Borderlands: The Pre-Sequel, both of which crashed out or froze during loading more than once.

In most cases, though, the Syber delivers superior performance to the Alienware system, giving you smoother frame rates and a punt at higher detail levels. For practical reasons we were unable to test the Syber with Shadows of Mordor, but we could run the old Half-Life 2: Lost Coast benchmark, and on this the Syber was some 15fps faster than the Alienware running with everything maxed out at 1080p. Sadly, Dying Light was more of a struggle, remaining unplayable on both SteamOS systems until we switched the resolution down to 720p. This doesn’t seem to be a fault of SteamOS as such, as the game’s performance issues under Linux are well-documented. 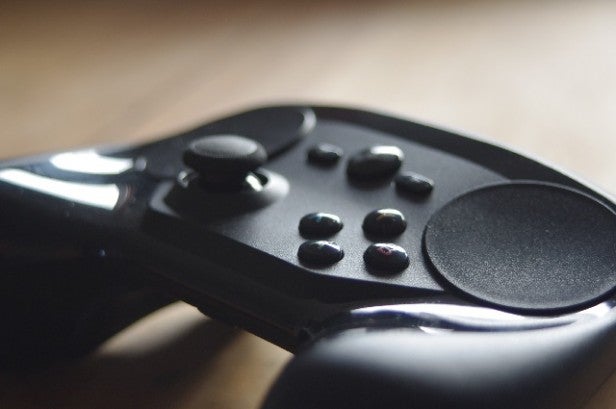 Should I buy the CyberPower Syber Machine I?

This, then, is arguably a better Steam Machine if you’re more concerned about performance and upgrade potential than having a compact, quiet and discrete games machine. The problem remains, do you really want or need a Steam Machine?

This one’s significantly larger and more expensive than an Xbox One or PS4, and it still won’t run the latest or greatest blockbuster games. And like Alienware, CyberPower sells a Windows equivalent – the Syber Vapor I – for £75 extra.

While that’s a larger price premium, we’d still argue that the extra money would be well spent to ensure that you get all the best games from Steam, not to mention Origin and GOG.

If you’re sold on the idea of a Steam Machine, then the Syber Steam Machine I gives you the performance and upgrade potential that the Alienware Steam Machine lacks. Sadly, there aren’t enough reasons right now to opt for a Steam Machine over a Windows gaming system. It’s a platform with potential, but you’d be missing out on some truly brilliant games.