Available on Xbox 360, PS3 (reviewed), PC
Is more of the same always a bad thing? In the case of Borderlands: The Pre-Sequel, maybe not. Developed by 2K Australia rather than Gearbox itself, it’s more of a hyper-extended DLC pack than a sequel as such, filling in some of the blanks between Borderlands 1 and 2, for those few who have even the slightest interest in the over-arching plot. For the rest of us, who simply love the Borderlands mix of FPS mayhem, sweet loot, Diablo-style upgrading and humorous dialogue, The Pre-Sequel is an opportunity to get a little more of it, albeit with a handful of twists. It’s also one of a dwindling number of games that are leading on the last-gen consoles, rather than being ported downwards. More than a few Xbox 360 and PS3 owners will probably be grateful for that fact. 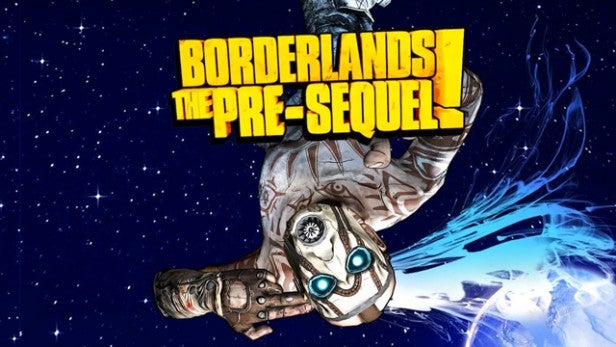 It’s set on Pandora’s moon, Elpis, features a new cast of vault hunters – though ones familiar from previous games and DLC – and focuses on the back story of the previous Borderlands’ villain, Handsome Jack. Graphically speaking, it seems identical to Borderlands 2, and the gameplay is no great departure either. You’re given missions, you shoot enemies. When the enemies die, you gain experience and the chance to hoover up their loot. Experience means you level up, gain skill points, and can spend them on a branching set of class-specific perks and skills. You also earn badass ranks from a range of challenges, winning tokens to be redeemed against a drip-feed of skill bonuses, enhancing weapon damage, shields, reload times, melee attacks and more.

It’s the upgrade paths that make Borderlands so addictive. Each of the game’s four protagonists has a different one, with different capabilities that can be unleashed at a squeeze of the trigger. As you level up and earn skill points these only become more useful, with the enforcer’s drones becoming faster and more powerful, while the lawbringer steadily develops a fantastic ‘showdown’ attack, where she can gun down a whole gang of enemies in a furious chain of auto-aim, damage-boosted shots. 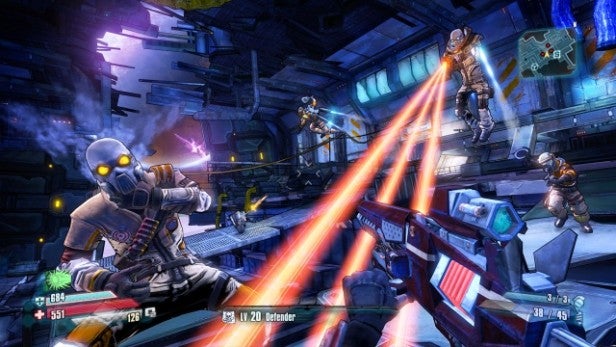 Throw in a seemingly endless stream of more efficient, higher-damage weaponry, and there’s always the feeling that a more satisfying way of slaughtering goons is only just around the corner. Fans will also note how cleverly the upgrade paths tie into the overall storyline; you’re watching characters from Borderlands 2 become the villains you’ll eventually meet. It’s also great to see 2K Australia making Claptrap a playable character, albeit a dysfunctional, unpredictable hybrid of the others where you never quite know what he’ll do next.

The Pre-Sequel also makes the most of its moon settings, throwing in a new crucial resource – O2 – and a mass of low-gravity high-jinx. You need O2 to breathe (though the game doesn’t punish you with insta-death for running out) but it also enables other tricks, namely a boost jump and glide in Elpis’s relaxed gravity, and a slam attack you can use to deal massive damage from above. 2K Australia hasn’t been able to resist a spot of platforming – though for once it actually works – but these new capabilities add a little extra something to the combat. Butt-stomping someone from a great height never gets tired, though you’ll also find enemies using it to their advantage. Sorry Call of Duty: Advanced Warfare, but everyone’s doing ‘verticality’ these days. 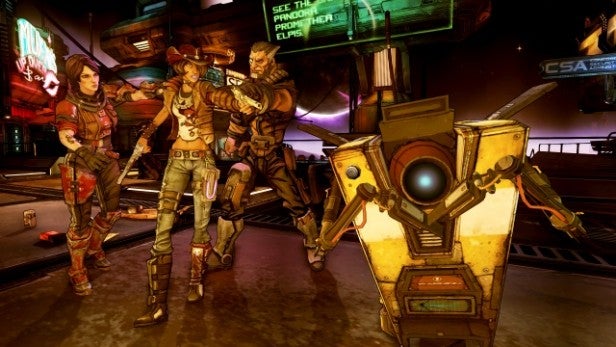 And the combat itself? Well, it’s the usual sort of fast-blasting bedlam. Enemies aren’t particularly smart, but they are numerous and aggressive. The various psychos and pint-sized nutjobs might be wearing space suits and talking – oddly enough – with Australian accents, but they haven’t grown any more placid, while Elpis has its own selection of fierce wild beasts to contend with. You’ll die fairly often if you’re playing solo, but there’s precious little penalty for doing so, and The Pre-Sequel gives you the chance for a last-ditch reprieve, provided you can kill someone while you’re bleeding out. It’s too generous a game for a punitive approach.

Comparisons with Destiny are pretty much inevitable. Both games put you in large open spaces and deal out combat-focused missions with loot and upgrades the main reward. Yet if the minute-to-minute feel of the combat is stronger in Destiny, and the mission design generally stronger, then The Pre-Sequel’s trump card is personality. I’m not one of those people who feels Destiny has no personality – Bungie knows how to create amazing worlds, and there is a back story there if you absorb it – but there’s something infectious about Borderlands and its humour. It knows what it is and what its fans are looking for, and it delivers. 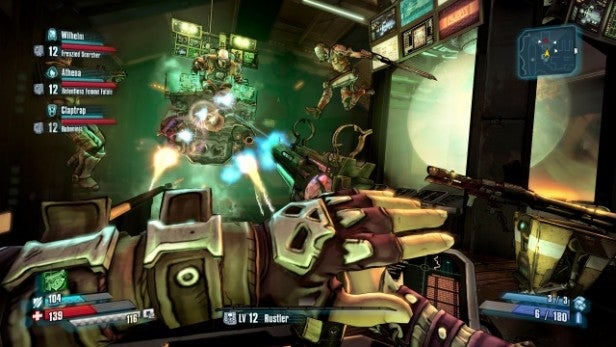 The downside of this approach is that there’s not an awful lot here that you won’t have seen before, and that the mission design can be lazy. Too many missions focus on a trip to an outpost to kill some dudes, climaxing in a bullet-sponge boss battle where you’re pelted with hard-to-dodge attacks. If you’re looking for the year’s best single-player shooter, this isn’t it.

Played with a pick-up group or some Borderlands-loving friends, it’s a different story. The difficulty level ramps up nicely to keep the action intense, and there’s a great sense of camaraderie and competition as you dispatch foe after foe. The Pre-Sequel can’t match the tenser, more tactical co-op play of Destiny’s Strikes – and the matchmaking experience isn’t nearly as smooth or as seamless – but in its own anarchic way, it’s just as much fun. 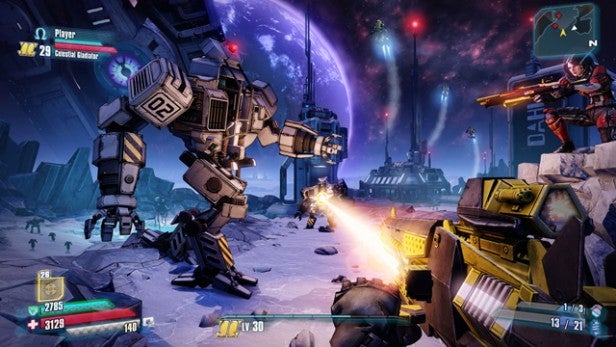 It’s easy to recommend The Pre-Sequel to fans of the series, providing they haven’t already gorged themselves to the point of bursting on two games and a pile of DLC. It’s not the best starting point for non-fans, as much won’t make sense if you haven’t played Borderlands 2. Given that Borderlands 2 can be picked up these days for a pittance, and looks, feels, sounds and plays practically the same, newcomers would be better advised to start off there. After that, however, you might feel like more of the same good stuff. If that’s the case, The Pre-Sequel won’t disappoint you.