What is the Corsair Strafe?

Corsair’s Vengeance K mechanical keyboards are among the most desirable on the market thanks to excellent build quality and a stylish design. However, their premium look demands a premium price, which is where the Corsair Gaming Strafe comes in.

This new addition to Corsair’s keyboard lineup is aimed at providing a cheaper alternative to the K series but that doesn’t compromise on performance or build quality.

To mark this our as a brand new addition to Corsair’s lineup, the Strafe is styled noticeably different to the K series. Not only does it not have the premium thick slice of aluminium on its top but the overall shape is different too.

See also: These are the best PC games you can buy 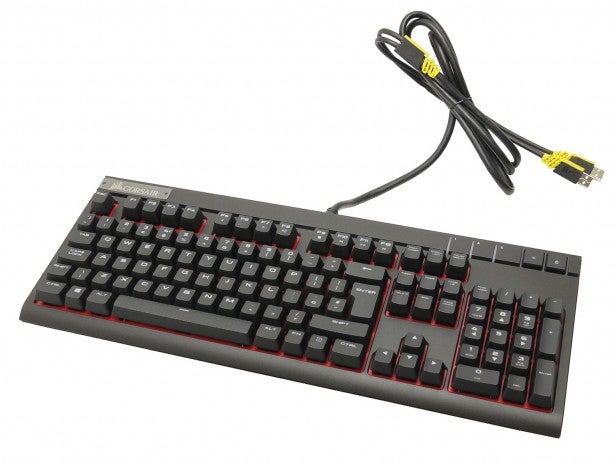 More importantly, it’s a design that works pretty well. It’s certainly quite simple but the plain black chassis and keys work well with the red backlighting, and the repeated use of the thick strips of light for the side and for the ‘Lock’ key indicators brings the whole design together. 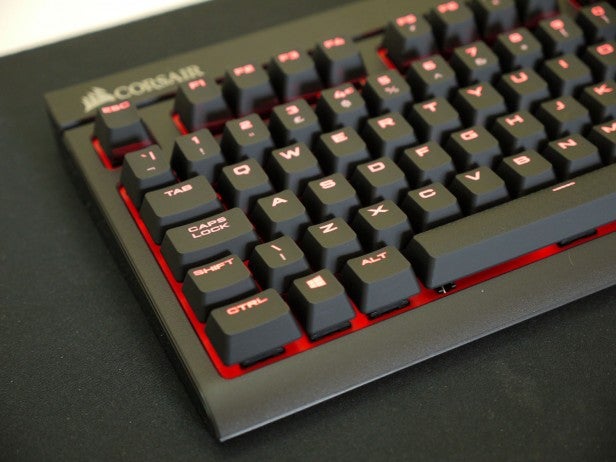 Despite having a plastic finish this keyboard is actually heavier than the Corsair K70 thanks to it having a steel core onto which everything is mounted. This gives it a reassuring heft and helps to ensure it doesn’t slide around your desk.

The finish itself is a simple rough matt on the top and underside, with glossy plastic sides and a finer grade matt finish on the keys themselves.

In order to keep the cost down on this keyboard Corsair has kept the feature list modest. Joining its backlit Cherry MX keys are buttons for adjusting the backlight brightness and locking the Windows keys.

You don’t get dedicated multimedia or gaming keys but do get basic multimedia functions from the F7-F12 keys when pressed with the Fn button that replaces the right-hand Windows key. 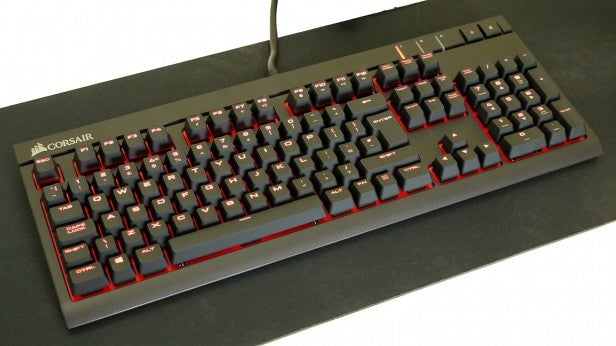 Other than that the only extra is a USB pass-through port. It’s just USB 2.0 and there’s only one of them but at least it gives you somewhere to plug in your mouse. To use the port you’ll have to plug in the second USB plug that sits at the end of the reassuringly thick two metre cable.

Hardware features are fairly modest – though Corsair does make a point of emphasising that its key switches are Cherry MX (Red or Brown) and not any of the raft of the cheaper alternatives that are starting to pop up – but one thing it can do is utilise Corsair’s excellent Corsair Utility Engine software.

The software lets you program macros, assign media controls and generally get the keyboard setup. It also allows you to fully program the backlighting, just like on the K70 RGB.

You don’t get the same ability to adjust colour but you can make funky animations and adjust backlighting layouts for different games or apps. 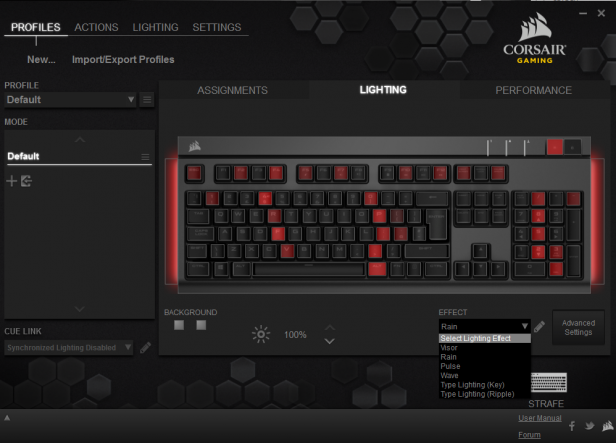 Unlike the original version of CUE, this latest edition lets you to choose from a selection of predefined lighting schemes such as visor, rain and pulse. Otherwise you’ve got to jump into the fairly complicated process of setting up lighting schemes manually, or you can download a scheme from the Corsair forums.

As well as general animations based on timed loops, you can also have individual keys react to being pressed or set off a ripple of light out from the key you’ve just pressed.

At the end of the day it’s of limited practical use – especially without the extra at-a-glance guidance of multi-colour – but it’s definitely fun to play with. 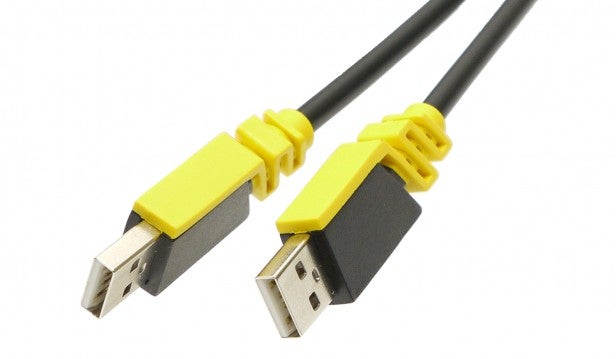 When it comes to performing that most important of tasks for a keyboard – actual typing – the Strafe excels. We tested the version with Cherry MX Red switches but either are sure to provide a great high-speed, high-endurance, reliable typing experience.

As ever, when it comes to mechanical keyboards, there’s an element of a learning curve if you’re used to low-profile keyboards but once up to speed they’re faster than just about any other keyboard type, and they last vastly longer.

It’s also a noisy keyboard when typing – again like most mechanical keyboards – so isn’t best suited for quiet shared work environments. This applies double as there aren’t any sound-damping rubber rungs under the keys like on some keyboards such as the Logitech G710+.

Should I buy the Corsair Strafe?

At the end of the day, we do rather like the Strafe. It’s stylish, in an understated gamer-oriented way, is great to type on and we enjoy the backlighting fun it provides.

However, there is a major sticking point – its price. Corsair’s aim was to create a cheaper alternative to the K70 RGB and it has technically achieved this goal, but only by £20 or so, and for that £20 you’re losing RGB backlighting, dedicated multimedia keys and that premium metal finish. That just doesn’t add up.

At the other end of the spectrum, you can get keyboards with the same core functionality for £20 less or for the same money something like the Cougar 700K adds a host of extra features. All the Strafe can really boast over them is that programmable backlighting, which is mostly a novelty.

We like the Corsair Strafe a lot. It’s a well made, nicely designed cheaper alternative to the the Corsair K70 RGB that definitely has the edge over even cheaper mechanical keyboards. However, it’s just a little too pricey for the features it offers and we’d recommend most users save up an extra £20 and get the K70 RGB instead.