Available on PS4 and Xbox One 3 June

Carmageddon is a game that was intriguing and notorious for the same reason Frankie Goes To Hollywood interested BBC-exclusive viewers – it was censored.

It seems incredibly timid compared to the likes of Grand Theft Auto, Manhunt and Hatred. But back in 1997 Carmageddon’s vehicular violence was censored in the UK by then games ratings regulator – the BBFC. Rather than be banned outright, the compromise was to replace pedestrians with zombies and turn blood green. It released with an 18 rating before later being successfully appealed and returned to its original form.

Nearly twenty years later the racer is coming to consoles with Carmageddon Max Damage, a cousin of 2015’s PC-offering Carmageddon Reincarnation. Does it have the shock value of its former life? Is it even attempting to make that comparison to its forefather?

Artistically it doesn’t stray too far from the original. It is currently running at 900p and 30fps on both PS4 and Xbox One. There is parity between formats and, even though I was playing a beta version, I didn’t experience any kind of frame lag as I drove around the giant city. 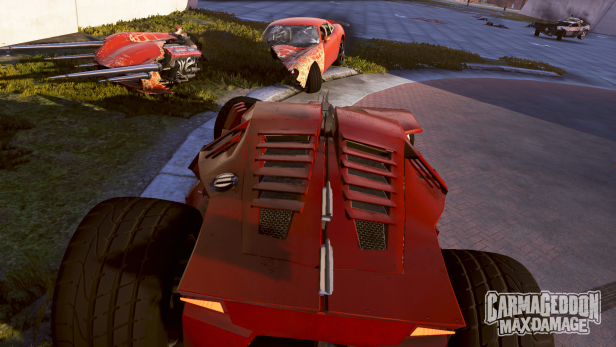 I say ‘drove’ but the game does its best to impede your ability to race. The big city, the first level of the game and biggest throwback to Carmageddon’s heritage, with its sports stadium, high-rise buildings, river and plazas, gives an early sign of trouble. The HUD (a carbon copy of Reincarnation) presents a mini-map, weapon selector, and your racing controls (right trigger to go, left to stop, O/B to handbrake X/A to fire weapons). The problem with the race is the AI, which can be over-aggressive and rarely tries to race against you. Instead enemies barge constantly, rather that attempting to encourage different play styles like attacking other drivers or earning bonuses.

The best way to score points, of course, is to be as gruesomely violent as possible, combining many chain deaths and attacks with special power up barrels littered around the map. Getting the right powerslide to leave a trail of bloody carnage is incredibly satisfying and before you know it, you’re spinning in a pool of messed up humans in Hawaiian shirts, wheelchairs, mobility scooters and bicycles. Tasteful it is not.

The game gives you plenty of ways to add more hit-and-run combo amusement, like being able to electrocute people close to your car, freezing enemy vehicles, calling the rapture, which sees pedestrians lifted up by a heavenly light, and ejecting opponents from their motors, all named with trademark double entendre. 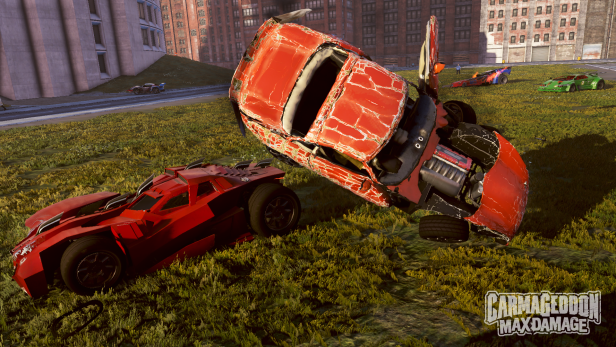 As you play around the games seven environments, you’ll see many different cars, unlocked by destroying them, and new targets for you to maim including wildlife, aliens and the formerly censor-proof zombies. Each car has its own feel – from big trucks to more sporty cars and the damage models are fun to witness. A few times my car was torn in half both horizontally and vertically. It costs points but repairing your car is as simple as holding down the triangle/Y button. Your car parts will fly back to their original places and then you can go and break it again.

As part of this, Max Damage improves upon the experience by adding new particle effects including the burned bodywork effect. Basically, your car will show burn scars if you’re on fire or drive through flames, eventually turning it as black as that toast. Max Damage also gives you extra cars, some extra environments based on the new desert area and an in car camera view.

As well as the career mode, the death race that allows you to steal the completed laps of other competitors, death matches and an oddly named Fox ‘n’ Hounds mode which is basically avoiding everyone chasing you, there will also be multiplayer setup for you to play these modes in what I can only imagine will be an online destruction derby. Plus you’ll get a replay mode so that you can save and share your favourite moments to everyone. 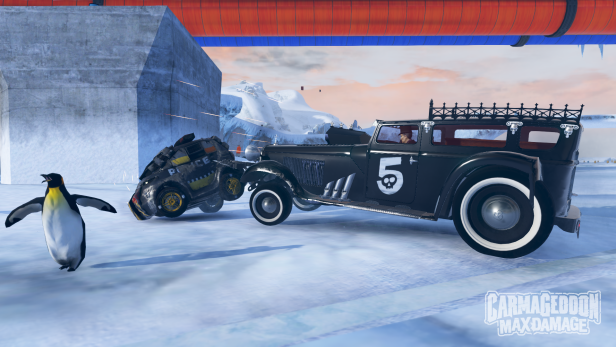 Carmageddon Max Damage takes so many cues from its predecessors that it hasn’t evolved much, but that’s not necessarily a negative. In one way it’s great that we get this classic slice of pre-broadband gaming updated for a new generation with overtones to its past. And it’s good that this is new content presented in the old, familiar style, but which isn’t just a rehash of the original release.