UPDATE, October 2017: Canary has made significant changes to its subscription plans and modifying its free plans. While the paid-for plans remain relatively similar, anybody buying a Canary product planning on using it subscription-free should heed the following. There are two major changes to the plans that are important to be aware of. Before, free subscription members would get full access to all the camera’s features including full-length video clips and Night Mode (see below), although the clips would expire after 12 hours.

Now, however, as a free member you’ll only get access to 10-second previews of all clips, and the only time these clips will be recorded is when your Canary is in Away Mode. Night Mode (not Night Vision) will not be accessible. The one upshot is that clips now expire after 24 hours instead of 12, but you’ll need to pay to access the full clip. You can find more details on Canary’s website.

Below continues my original review from August 2017 – some screenshots and features may have changed. The 6/10 rating applies to the product review from mid-2017 and does not reflect the changes to the free subscription plans.

What is the Canary Flex?

While the original Canary smart camera was an indoor-only model, the Flex is all about the outdoors and comes loaded with a built-in battery, weatherproof design and adaptable mount.

It slots in at under £200, which is substantially less than the high-end Netgear Arlo Pro, and exactly the same price as the recently-launched Logi Circle 2 outdoor camera.

But for all its promises, I’ve been underwhelmed by the Flex, with its annoyingly short battery life and rather patchy performance proving to be fairly major stumbling blocks. It’s nothing a few software updates won’t fix, but the Flex, right now, is a tough sell.

The Flex looks like a super-sized pill. At 11cm tall with a diameter of 4.8cm, it’s weirdly unwieldy because of its strange shape and semi-spherical base. The Flex can be connected to a variety of mounts, some of which are attached via the tripod thread on the bottom of the device. In the box, you get the magnetic mount, which acts as either a base for placing on flat surfaces, or a wall mount if you want to screw it into a wall.

Because the base is magnetic, it’s easy to adjust the Flex once you’ve popped it into place. This means that as long as you get the basic positioning of your mount right, adjusting the camera’s viewpoint is very easy. 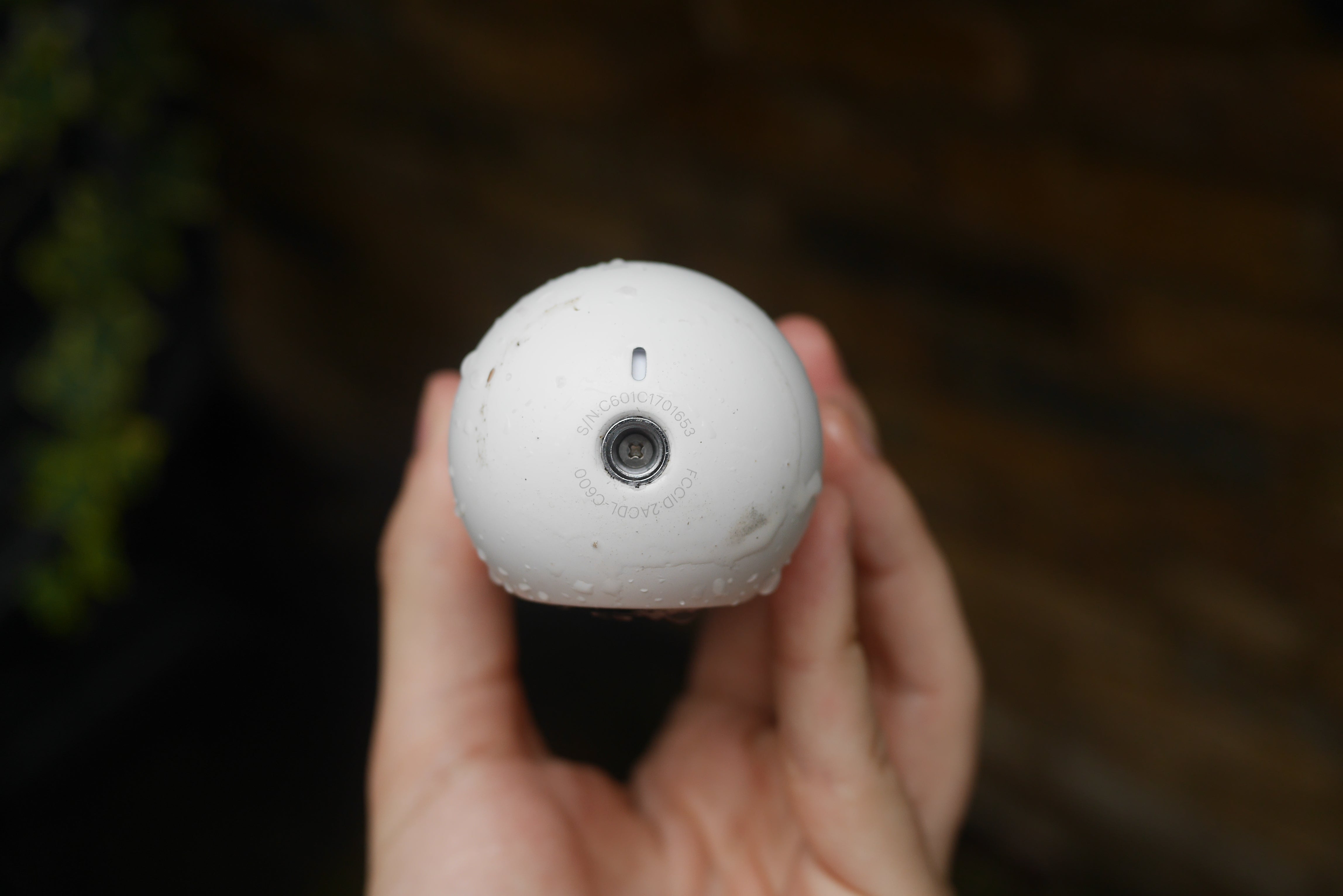 The camera comes equipped with a 6700mAH battery that can be charged using the proprietary, weather-proof charging cable. As long as your USB plug adapter is either indoors or under a weather-proof housing, the Canary Flex can be plugged in permanently without the need for its battery.

The camera itself is a 720p sensor with a viewing angle of 113 degrees. This is enough to cover the entirety of my relatively small back yard, and should be enough for most people. But it feels like quite a lot less than the ultra-wide 147-degrees of the regular, indoor Canary.

Setup is simple, and is done using Canary’s iOS or Android apps over Bluetooth. Connect the camera to your Wi-Fi connection and you’re away. Configuring how the Flex behaves takes a little more time, and you’ll spend at least your first week tweaking things so the Flex fits in with your daily habits. 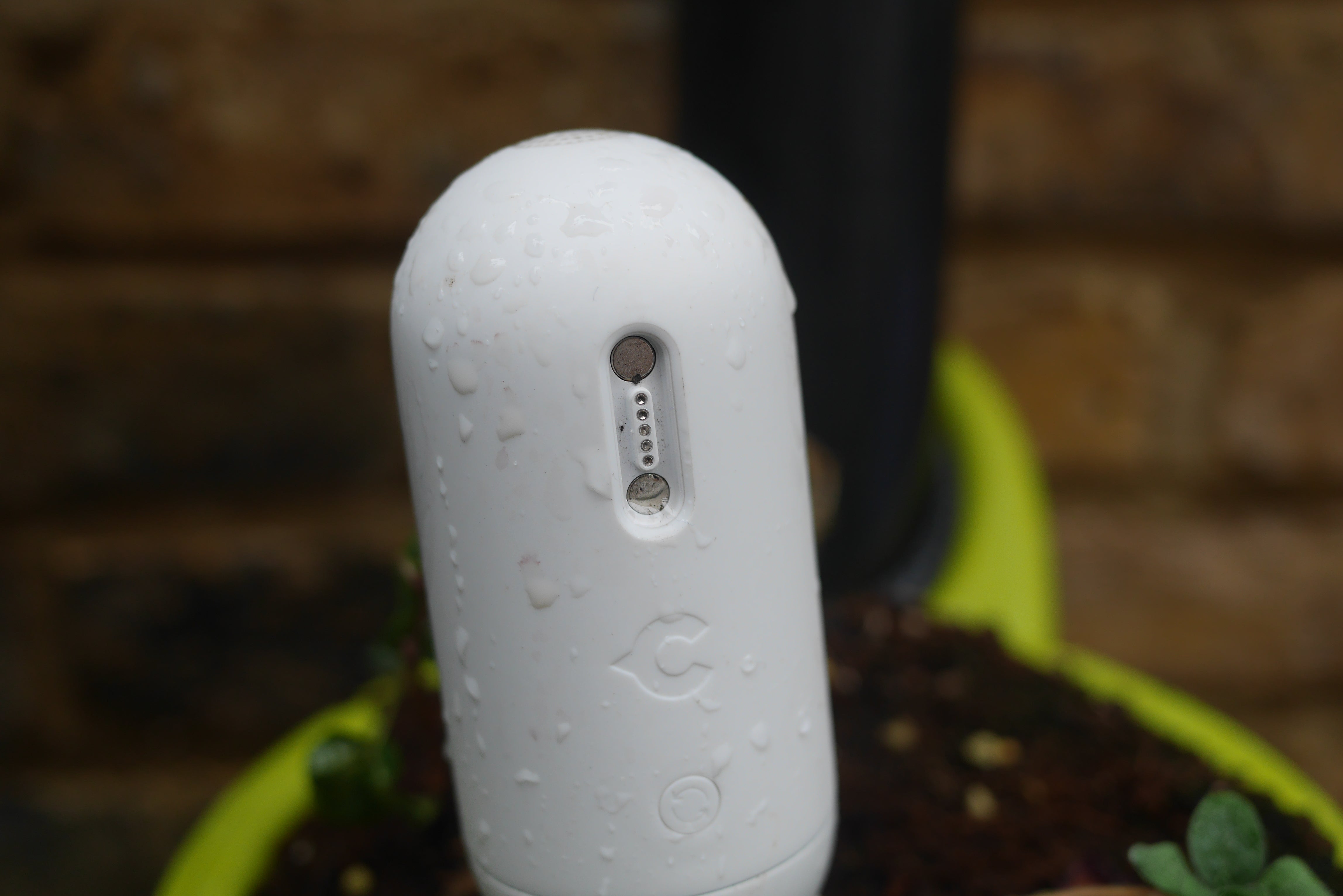 Auto uses a combination of geofencing (using your phone’s GPS to automatically arm your camera while you’re away) and Night mode, which activates at a certain time whether or not you’re at home. Auto works best when every member of your household has Canary installed on their smartphone. You can also just manually switch between Home and Away if you’d prefer not to use geofencing.

Each one of these modes can be customised on a per-camera basis, which is great when you have multiple Canary cameras active. This meant I could set my Flex to arm earlier in the evening when it’s unlikely we’d be hanging out in the yard, but keep the indoor camera disarmed up until our usual bedtime of around 11:30.

Slightly less useful is the Flex’s three battery modes, which consist of short-range, medium-range and long-range. The shorter the range, the longer the battery life because the motion detector won’t look for motion beyond a certain distance. Unfortunately, this isn’t explained in the app at all, and I had to get a Canary technician to explain it to me. Essentially, if you’re trying to detect human movements, short range will see for around 3m, medium up to 5m and long-range up to 9m. The lack of an in-app explanation of this is puzzling.

Canary works with the Wink smart home platform, which allows it to work with the likes of IFTTT (if this then that) and Amazon Alexa. It doesn’t currently support Apple HomeKit.

Living with the Canary Flex

The Canary Flex hasn’t been an easy companion to live with. I’ve been using it for about 12 weeks and am only just coming to terms with its idiosyncrasies. First, the good. The Flex does detect motion relatively reliably, powering on from its sleep mode when its PIR (passive infra-red) motion detector sees a large or warm object moving.

I also like the way the app arranges its timeline. It’s easy to navigate and makes it clear whether a piece of footage was worth a notification or not. My one gripe is that the timeline can’t be filtered by device, so you’ll get every single piece of footage every camera has captured, instead of just being able to focus on, say, your front porch camera. 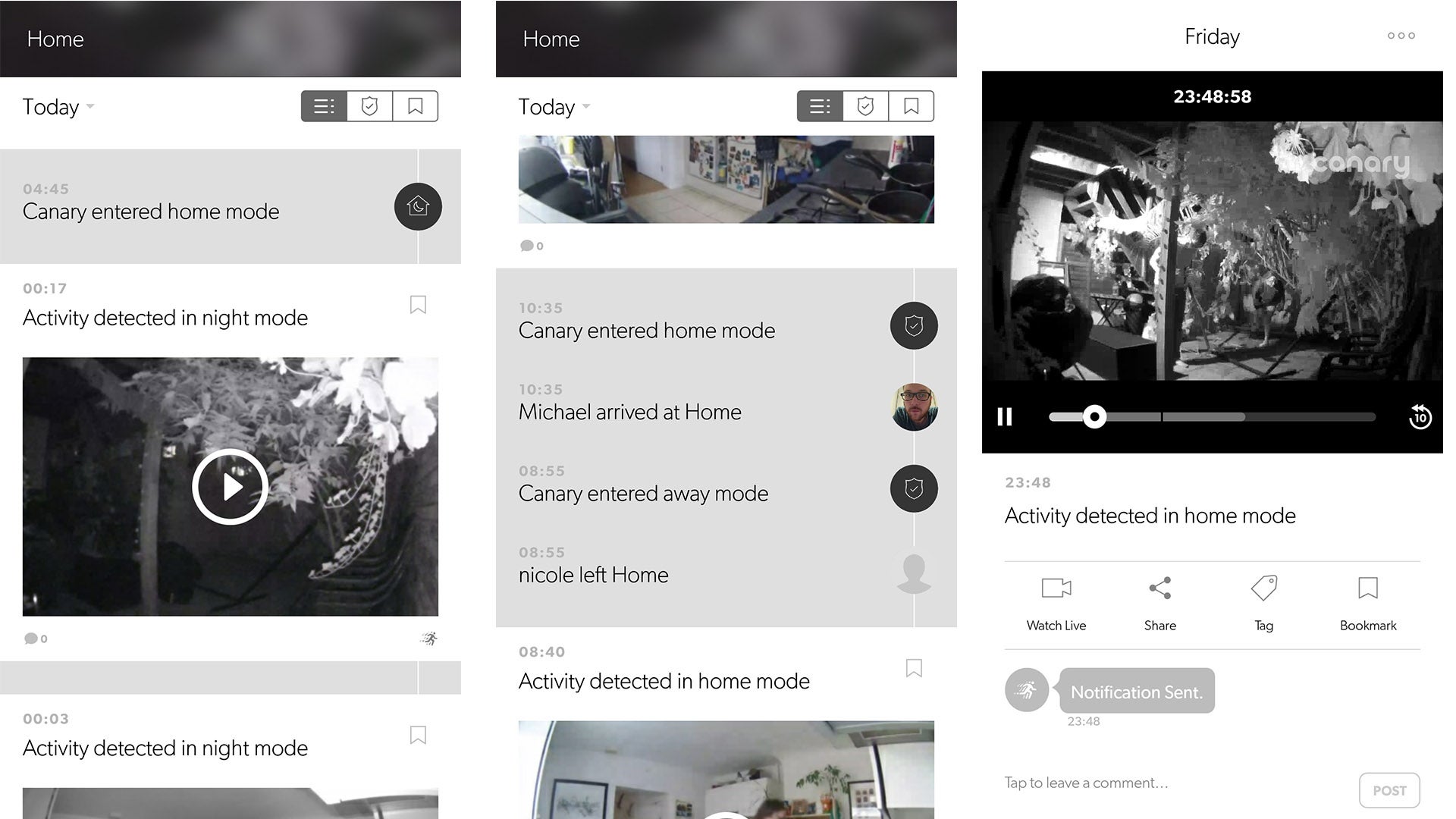 Connectivity was just about fine, but not at all perfect. This is less the fault of Canary and more the realities of home life: it struggles with anything less than an excellent Wi-Fi network. My Flex was sitting about 5 metres away from a Wi-Fi extender through a brick wall, and it would disconnect for at least a couple of minutes once a week. That’s enough to be a bit alarming, and I’m absolutely sure other people buying this product will have a poorer Wi-Fi setup than mine.

It also takes an age to wake up from sleep. If you want to check in on what’s going on, expect to wait 15 seconds to get a picture of what’s happening. Annoyingly, the app sometimes fails to actually load the stream, and that requires an app restart. Even more irritatingly, when you’re checking during the night, the Flex’s night vision camera doesn’t switch on and that, again, means another app restart.

When it actually records movement, video quality is mediocre at best. It’s not particularly bright even in well-lit conditions, and the infra-red night vision camera isn’t very powerful. It’ll just about see across my yard, but for clarity you’ll probably want a motion-sensing light or a dedicated infra-red light. 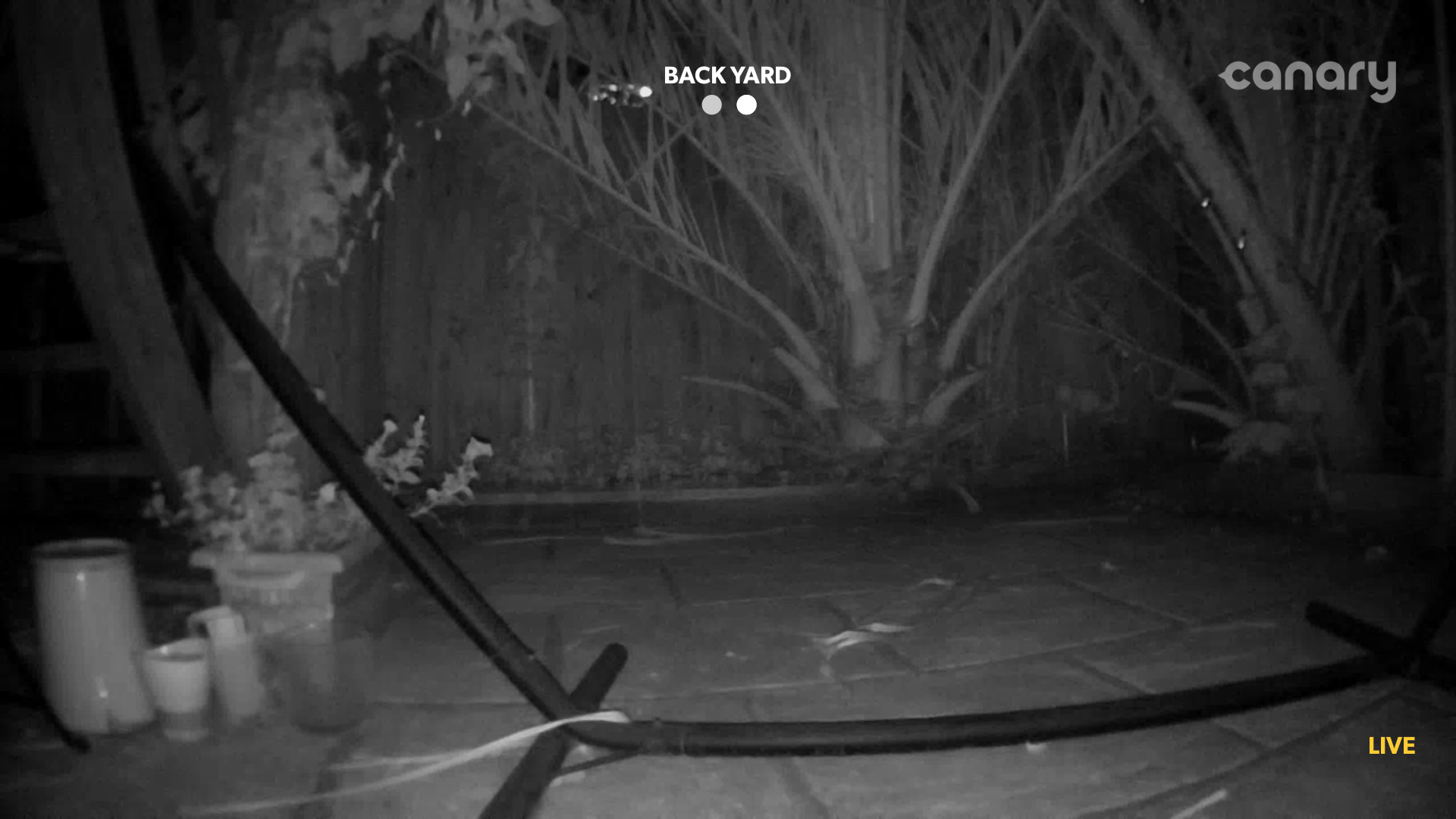 There were also problems with the Flex actually recording a complete sequence. If somebody walked into the detection range, it would start recording, but if they left then it would stop, again. In other words, they were still very much visible in the view of the camera, but because the motion sensing portion could no longer see them, the camera stopped recording. The Flex isn’t clever enough to realise that a big warm object like a human entering the frame should be top priority. The plus side is that there were very few false notifications caused by trees blowing in the wind.

The way to solve this rather odd behaviour is to increase the motion-sensing range. But that decreases battery life. For the most part, I was getting 10 days at most from a single charge, even when it barely recorded anything during that time. Canary makes no claims about battery life but 10 days is certainly not enough. It also takes more than four hours to fully charge, and with no removable battery, that results in a lot of down time.

Looking at Canary’s (admittedly excellent) community forums, it seems I’m not alone, although others are getting as much as three weeks from their Flex, some get as little as a week. It seems to depend on your environment and Wi-Fi setup, but that’s not much comfort for those who can’t plug in and can’t change their Wi-Fi kit at the drop of a hat.

The way to solve all of these problems is to have the Flex plugged in; it’ll never run out of battery and it’ll detect motion reliably as if it were a regular Canary, but with all the benefits of weather-proofing and its adaptable mount. This is a fair argument to make and does somewhat save the Flex from being a product to avoid. But drilling a power cable through your wall for a product you thought you’d be able to just set down and leave for a few weeks is a disappointment.

Should I buy the Canary Flex?

Plugged in, the Canary Flex is a good security camera. But on battery, which is one of its unique features, it’s a bit disappointing. The amount of fiddling to make it work reliably is too great given the short battery life, and connection issues compound this.

Key rivals do the basics better. The Logi Circle is a good, battery-powered indoor camera while the Nest Cam Outdoor is weatherproof, but lacks a battery. I’d still  recommend the indoor Canary camera if you don’t need to monitor your garden, and it comes with handy temperature, air quality and humidity sensors as well. If you want to go premium, the Netgear Arlo Pro still leads the pack.

Canary’s second camera is disappointing unless you keep it plugged in.