What is the Netgear Arlo Pro?

The Arlo Pro is Netgear’s high-end, weather-proof and fully wireless camera. It requires a minimum initial outlay of around £300 for a single camera and a base station, but once it’s set up it’s a dependable and easy-to-use addition to your home security arsenal.

It works alongside all other Arlo products, and while it’s certainly expensive, if you have a large property and want to keep an eye on animals outdoors, or want a camera that can be moved around frequently, it’s brilliant.

The Arlo Pro sits alongside the regular wireless Arlo – not tested here – and the wired Arlo Q and Arlo Q Plus. The Arlo Pro’s design is functional and friendly, with the camera sitting inside a quality and robust white plastic housing. It’s completely weatherproof; I’ve been using the Arlo Pro outdoors for four months in various positions, including spots close to the ground, and it’s survived torrential rain and sprays from a hose without fault.

The camera itself is a 720p sensor and a wide-angle, 130-degree lens, while at the rear there’s a micro-USB port for charging and a flap under which the 2440mAH battery sits. The camera will spend much of its time switched off, only turning on and recording when motion is detected by the IR sensor that sits beneath it on the front of the unit. 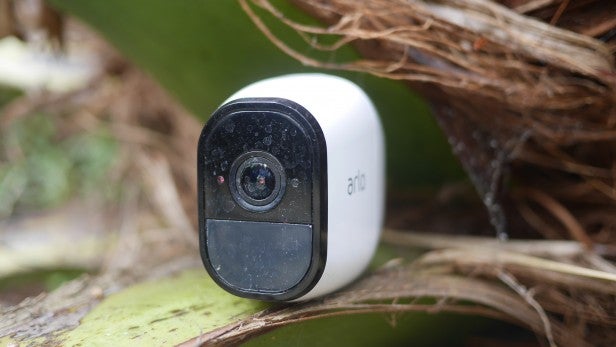 The Arlo Pro only works when it’s connected to its base station, which is usually sold with Arlo kits but can also be bought separately for around £90.

The base station uses a dedicated 2.4GHz Wi-Fi network that only your Arlo cameras can see. During my four months with the Pro, I can’t remember a time where it has been offline. My Canary Flex, which was outside around the same time and connected to a cheap Wi-Fi extender, disconnected for a few minutes perhaps every week. This isn’t down to bad hardware on its part, but weak Wi-Fi from the extender I’ve been using that has to travel through two thick walls to get to the garden.

Some might be disappointed to find there’s no SD card storage on the device itself, but fear not, the base station supports USB storage. This means that any recordings your Arlo Pro makes can be stored locally as well as in the cloud. It’s a neat way of avoiding extra bulk and processing power in the camera itself, and makes the base station feel less of a tacked-on extra expense. This also means you might not feel compelled to shell out for a an Arlo subscription, which is a nice way of saving some extra cash in the long term. 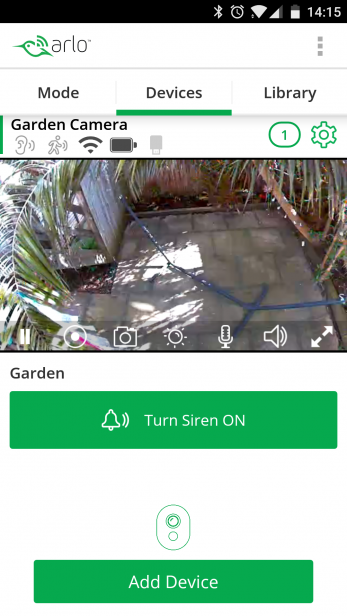 The base station has to be connected to your network via an Ethernet cable, which might prove a problem if your router is far away from where your camera will ultimately be set up. You might need to buy a Wi-Fi extender with an Ethernet port. That’s how my setup worked, and I had no problems.

The base station also comes with a super-loud alarm that can be triggered under circumstances of your choosing. Each camera you connect to the base station can have different rules set, so not every camera will trigger the alarm if it detects motion.

Technical setup is done through Netgear’s app, which is quick and easy. I was up and running in less than 10 minutes. 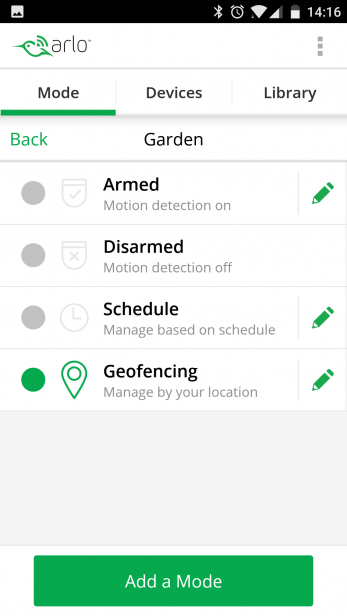 The Netgear app has some really useful features, including a low-latency mode that lets you see an almost-live view of your camera, which makes picking a position and angle for your camera very easy.

My package shipped with a magnetic ball mount that can be attached to objects using screws. The camera simply snaps onto the magnet, and you can move the camera around on the magnet to get the perfect shot.

Then, to ensure its motion detection isn’t over-sensitive, there’s a motion detector testing mode that flashes an LED on the front of the camera as soon as it detects motion. This then allows you to fine-tune the sort of motion you want it to detect. If you’re watching a pet, for example, you’ll want increased sensitivity – but if, like me, your outdoor area has lots of moving trees, you’ll want to tune in to only see larger movements, such as people.

You can also set the the camera to only detect motion in a portion of the frame. Again, useful if moving trees or a busy road is always in view. 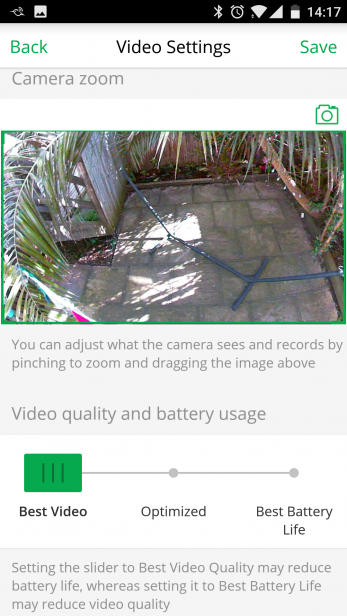 Once you’re done with that, it’s a case of setting up rules for your camera(s). You can use geofencing to arm your camera while you’re away and disarm it when you’re home, or you can use a block scheduling system to change the camera’s behaviour. It isn’t immediately intuitive and takes some getting used to, but it’s the most advanced scheduling system I’ve used.

Arlo works with the popular IFTTT smart home unification service, but it doesn’t yet work with Apple’s HomeKit platform.

Despite only packing a 720p sensor, the Arlo’s video quality is excellent. The wide-angle lens means I was able to see the whole of my yard from pretty much any angle. Night vision is also very good, lighting up all 20ft of the yard, ensure subjects are clear and recognisable. 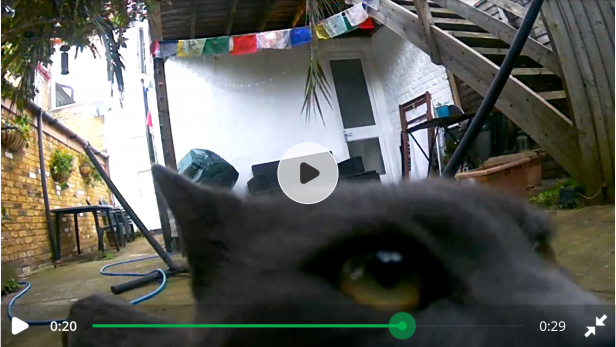 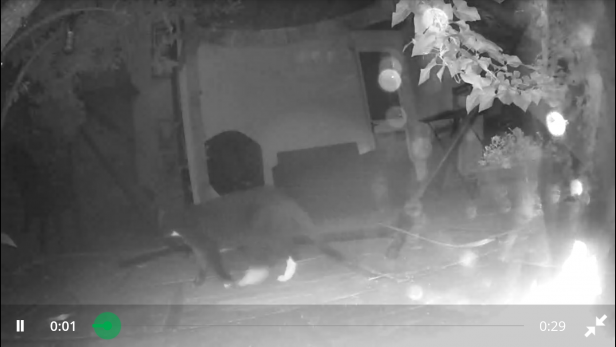 I put the Arlo Pro in my back yard to monitor comings and goings. For the majority of the four months that it’s been there, it’s sat near ground level. I’d have preferred a higher vantage point, but the Arlo saw far too many false positives in other positions due to the proximity of moving trees in the garden. From its low position there were very few false flags, and the only things it spotted were local cats.

In order to keep the number of notifications down, I kept the motion sensitivity quite low so smaller animals such as squirrels and birds – which frequent my yard much more often – were seen less often. The vast majority of my captures were of cats, as well as me and my partner when we used the yard. No nefarious characters entered my yard during my testing time, which was reassuring.

Probably my biggest complaint is the delay between movement being detected and the recording starting. Often, a cat would be half way out of the garden before the Arlo Pro started recording. This saves battery, of course, but you should bear that in mind when choosing where to place your Arlo Pro; you’ll want it to have a long line of sight so if a criminal does enter the frame, they’ll be there for a while. But if someone is jimmying your window or attempting to break in another way, they’ll probably be on camera for long enough to capture their face. 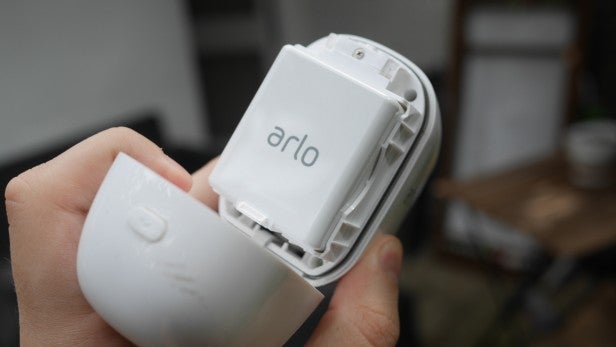 Since I first set up the Arlo, it hasn’t required a recharge. At the time of writing, it’s a little below half charge. However, given it doesn’t do a huge amount of work and doesn’t send any data – unless it detects motion or you’re watching the live view from within the app – this isn’t hugely surprising.

Despite this, I’m still really impressed with the Arlo Pro’s battery life. You can buy a separate charging cradle and battery, so you don’t have to take your Arlo Pro out of action when it runs dry; just pop out the depleted cell and stick in the new one.

On occasion the app has proved a little annoying, particularly with its fingerprint login feature that doesn’t always work properly. And since the app is so complicated, I often forgot where important settings were when I needed to change them.

Netgear is generous with its free and paid subscription options. If you have fewer than five cameras, you can get away with the basic free tier that nets you 1GB of video storage; recordings last seven days before expiring. You can download them at any time, so you can keep any highlights or criminal evidence without having to pay a penny.

Premier costs £6.49 a month for 10GB of storage and 30-day video expiry. You can also have up to 10 cameras on Premier. Finally, the Elite option nets you 60 days of video and 100GB of storage, along with support for 15 cameras. Up against the competition, this is exceptionally competitive.

Should I buy the Netgear Arlo Pro?

The Arlo ecosystem is one of the finest out there for hardcore home-security aficionados. The Arlo Pro fits into the company’s offering very nicely indeed, offering a reliable and long-lasting outdoor camera that won’t fail at the first sign of moisture. Along with a good app and great-value subscription options, it’s an excellent buy. The only thing holding it back is its high cost.

If you want something a bit cheaper for monitoring pets inside your home, perhaps the Logitech Circle will be a better bet thanks to its fun ‘Day Briefing’ mode. Or the Canary, which monitors both using video and air quality, temperature and humidity sensors.

A premium outdoor camera that’s worth every penny.