Editor’s note: Our original review, published in March, scored the Logitech Circle 2/5 stars. Over the course of this long-term review, the Circle received a series of huge updates that have massively improved the product, which is now reflected in the review below.

What is the Logitech Circle?

From keeping your home secure to recording life’s precious memories, there are loads of ways smart home monitoring manufacturers can guilt-trip you into buying their latest wares. Logitech has taken a very family-focused approach with its Circle camera, claiming it’s the ideal solution for any parent looking to keep a watchful eye on their kids remotely.

Since my original review of the Logitech Circle, the company has taken huge strides and made such massive changes it’s worthy of a re-visit. It’s still useful for parents and pet owners, but it’s now much more usable for everybody else, too. And that is a really, really good thing.

In technical terms, it’s no different to every other smart home monitoring kit Trusted has reviewed in recent months. It lets you monitor your home from anywhere and includes motion sensing, night vision and some cloud storage space. Its base pricing puts it in the same ball park the class-leading Y-Cam HomeMonitor HD and Nest Cam and, along with its newly-added subscription options, it’s one of the most cost-effective cameras around.

Setting up the Circle is fairly simple. The camera takes the form of three separate pieces: a mounting plate for screwing into the wall or ceiling, a charging dock that attaches directly to the mounting plate, and the main spherical camera. The main camera is attached to a circular plastic base that can be separated from the charging plate and moved around your home.

The camera has electrical contact points on its underside that connect directly to the charging ring. This means the camera can be rotated independently of the stand, so you’ll never run the risk of getting its wires tangled. The camera has 110 degrees of tilt too, so it’s very easy to point it in the right direction. There’s also a USB wall plug and a 10ft USB cable that’s hard-wired into the charging ring. 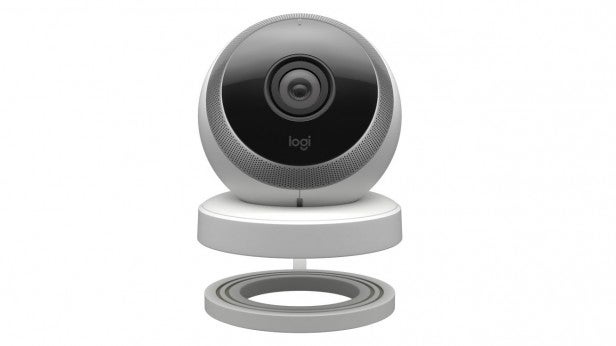 The camera will last up to 12 hours undocked when in battery-saver mode, where it doesn’t record or stream any video unless it detects movement. In my experience, in non-battery-saver mode the camera only lasted a couple of hours, which limits its usefulness. Still, if you have a room you want to temporarily monitor without moving the whole unit, this is very helpful. Used as a baby monitor, combined with the Day Brief function (see below), the Circle could be very effective.

Related: Smart thermostats in the UK

The Circle can only be controlled through smartphone apps, either on iOS or Android. I set mine up using a Motorola Moto X Style and the process was surprisingly hassle-free. I simply downloaded the Logi Circle app. From there the app found the camera using Bluetooth and provided it with my Wi-Fi details and I had a live stream of what my Circle was seeing.

Logitech has added a browser-based interface that can be accessed at circle.logi.com. It functions identically to the smartphone app, but it’s useful for checking in on your home while you’re at your desk. 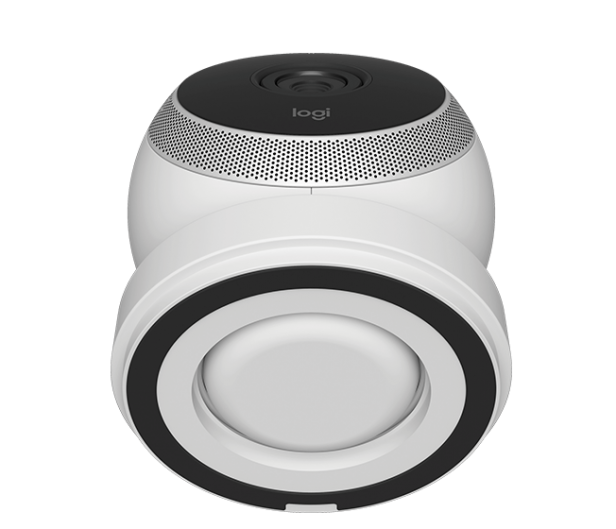 The Circle has pretty basic hardware. Its sensor can record video at 1,280×720 and 1,920×1,080 Full HD resolutions and it has an on paper 135-degree wide-angle lens. I’m not convinced of this 135-degree figure, however, because the Nest Cam claims a 130-degree angle and clearly has a much wider field-of-vision – I placed the two next to each other (see below) and found the difference is stark. 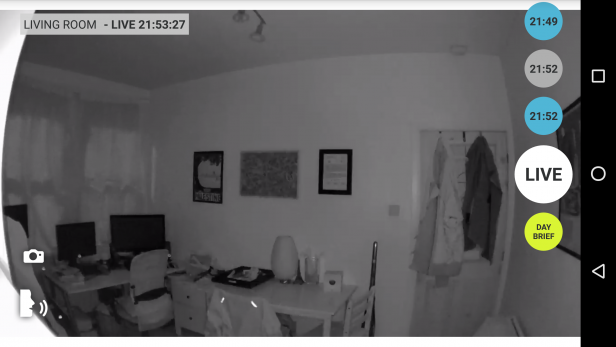 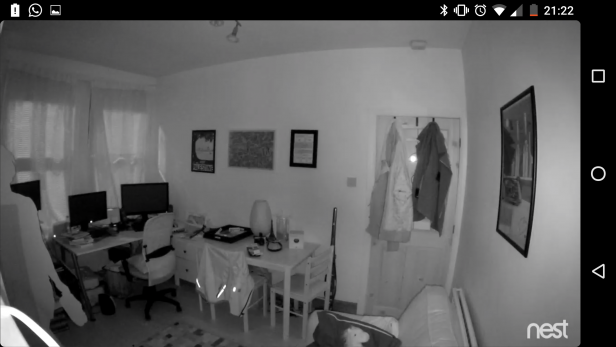 Nest Cam night vision – a much wider field of view

There’s also a built-in microphone and speaker, so you can have a conversation from your smartphone with whoever’s in the room with the camera. Finally, it has an infra-red night vision mode that can see in the dark up to 15 feet away.

The Circle doesn’t hook into any external services such as Apple HomeKit or Google’s Brillo, which is of no use if you have other smart home devices installed and want to use the Circle as part of your setup.

Living with the Logitech Circle

Since my original review, Logitech has updated the camera to record video at Full HD resolution. It’s not clear why the company didn’t enable this in the first place, and to be honest I struggled to tell the difference between 720p and 1080p in my own tests. To save bandwidth, I kept the Circle at 720p.

Unlike the Y-Cam, there’s no way to set certain zones up for motion sensing; for example, I couldn’t have the camera ignore my doorway, so it would alert me every time somebody walked by. It’s everything or nothing.

I also had problems with the night vision mode. My flat doesn’t have blackout curtains so the street lamps outside shine through the windows. To the naked eye, my living room is very dark, but the Circle sees the leaking light as a proper light source and instead of switching to night vision mode it just ups the brightness levels and creates a noisy image.

I had to trick the camera into activating night vision by pointing it at a wall, waiting for night vision to activate, and then place it back in the desired direction. This won’t be a problem for people with proper blackout curtains, but worth knowing if you’re a cheapskate like me. I should note that in exactly the same conditions the Nest Cam always activated its night vision mode. 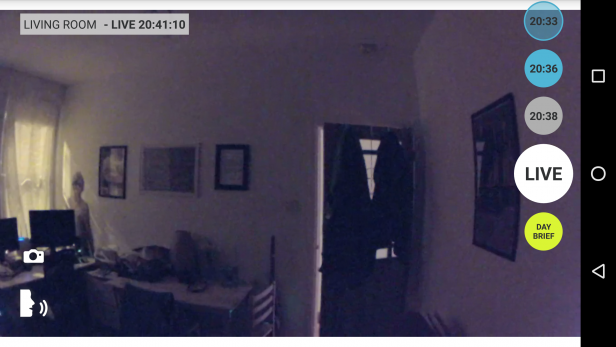 Location-based notifications are another massive update. You can set your own home location and, when you’re away, notifications will fire up. This is a similar system to the Canary, although it’s not quite as advanced. Canary works brilliantly for multi-person households, only firing notifications when all household members are away. With the Circle, notifications are set on a device-by-device basis, and sometimes they conflict if one person is at home and the other isn’t. It’s not a huge issue, but because my partner works from home it means it’s fairly useless for my particular lifestyle. A more advanced, Canary-like household setting would be top of my list for a future update. 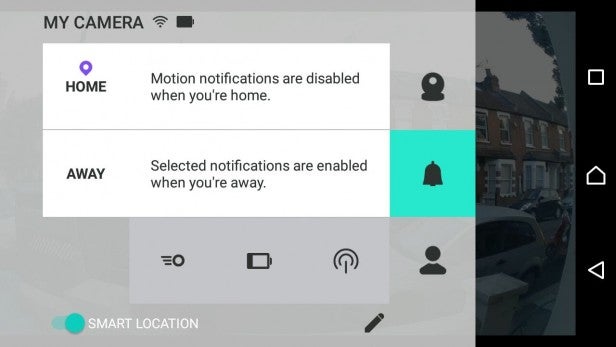 It’s a shame there’s no facial recognition tech similar to the Netatmo Welcome, which I have also lived with, as this eventually learned my face and knew when me or my partner had arrived home.

The app looks great and is pretty easy to use with a simple timeline of activity that’s been recorded down its right-hand side. This timeline can be scrolled through and each highlight can be watched and downloaded to your device if you want to keep it. From there a Day Brief can be used to create a highlights reel of the day’s action with a mix of sped-up and normal-speed clips.

Most recently, Logitech has updated the app so the Day Brief can now generate highlight videos from the last hour all the way up to the last month of captured footage. Briefs can be as short as six seconds or up to a full minute. The longer the video and the wider the date range and the longer it takes to generate, but it’s incredibly useful if you haven’t check your Circle for a couple of days. 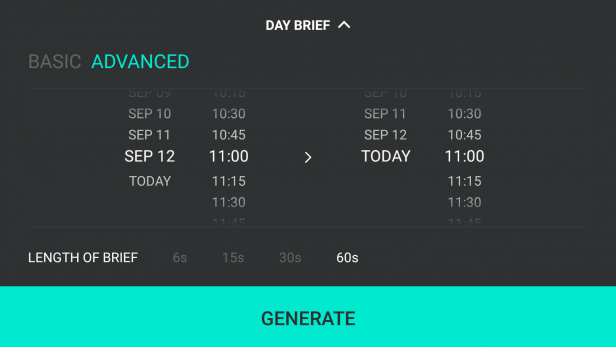 Since the first edition of this review, I experienced an attempted break-in on my ground-floor flat and, in a separate incident, woke one day to find my bicycle without its wheels. With the threat seemingly all around me, I dug the Logitech Circle back out and started to use it to monitor the front of my flat.

This is where Day Brief came into its own. I could easily look at everything that had happened while I’d been at work, and in the days after both crimes I found myself checking them when I woke up in the morning. I also now use Day Brief whenever I’m on holiday.

Day Briefs aren’t perfect: none of the clips used in the day brief are timestamped so you can’t easily go back and watch a clip in more detail, which is very frustrating if your camera is watching over an area that sees a lot of activity every day. 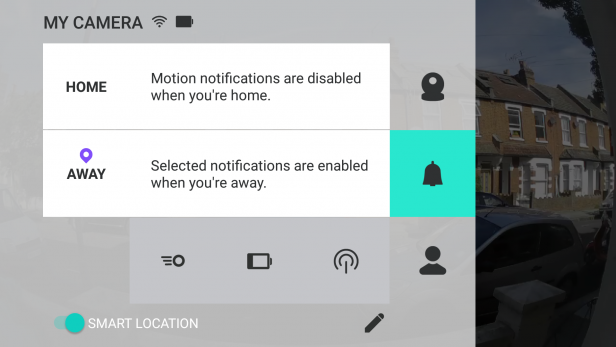 In order to get more than 24 hours of footage, you’ll need to subscribe to Circle Safe, which just launched. Circle Safe is much, much cheaper than its rivals, costing just £80 per year (if you pay for a year up front) where the likes of the Canary will cost £24 a month if you want to keep a month of footage. It’s also miles cheaper than Nest. If you don’t pay, you’ll still get the previous 24 hours of footage for free, which is more generous than the 12 hours you get with Canary.

Should I buy the Logitech Circle?

The Logitech Circle has improved beyond all recognition since I first reviewed it back in March. Now, with a few updates and the addition of a subscription plan, it’s been transformed from a barebones device to an indispensible part of my own home security system.

If you want the simplest way to keep tabs on your house and its inhabitants, the Logitech Circle is a great buy. It might not have the most advanced security features of its rivals, but it still does a damn fine job.

Logitech has undercut all of its rivals with cheaper subscription plans and a unique feature in the form of Day Brief. It’s still missing some advanced features, but it’s now my personal favourite home monitoring camera.