What is the Cambridge Audio TVB2? 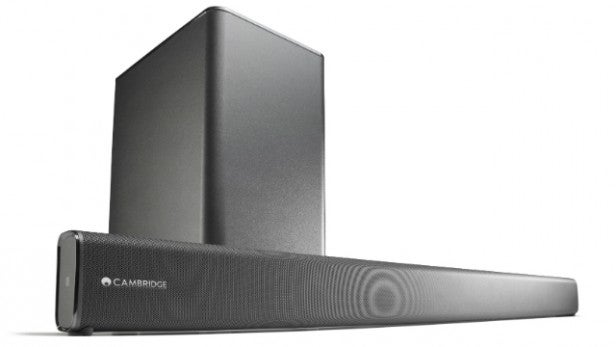 Soundbars are designed to be heard but not seen, and the TVB2 fulfils that brief with its unpretentious black styling and compact dimensions. Whether placed on a wall or TV stand, this discreet speaker doesn’t draw attention to itself.

A closer inspection reveals the sort of excellent build quality we’ve come to expect from Cambridge Audio. Most of the bar is covered in a rigid metal mesh, while the back-end has a smooth matte finish. It’s actually more attractive than it appears from afar, with curved edges and shiny trims lending a touch of subtle elegance. 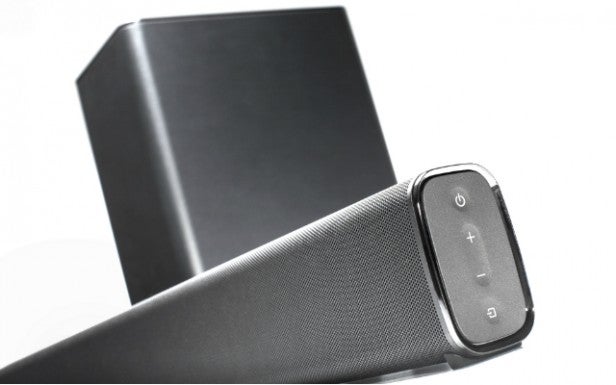 The enclosure measures 880mm wide by 46mm deep, which takes up only a fraction of my TV stand’s top surface. However, at 74.5mm high, it blocks the set’s IR sensor from certain angles and there’s no repeater function. Of course, none of this is a problem if you’re wall-mounting the bar, for which you’ll need the supplied metal bracket.

At one end you’ll find volume, power and input buttons, while the opposite end sports an NFC touch point. A helpful illuminated display shines through the front grille, giving information in large, clear digits. It disappears after a few seconds so it doesn’t distract from the screen.

The generous array of sockets on the rear comes as a pleasant surprise given the soundbar’s size restrictions. There are three HDMI inputs – all of which pass through 4K and 3D – plus an Audio Return Channel-enabled output that receives audio signals from a compatible TV.

With no Dolby TrueHD or DTS-HD Master Audio decoding on board, the HDMIs won’t offer a massive sound-quality improvement over the optical input, but you can hook up external hi-def kit and use the TVB2 as an HDMI switcher.

The sideways-facing sockets are housed in two tight recesses on the back, which makes it a little tricky to manoeuvre the HDMI cables into place – particularly ones with the ferrite core attached. However, it’s possible with a little persistence.

The lineup is completed by an optical input, which is ideal if you want a tidy, one-cable connection to your TV, and a 3.5mm mini-jack input for any other devices you want to hook up. 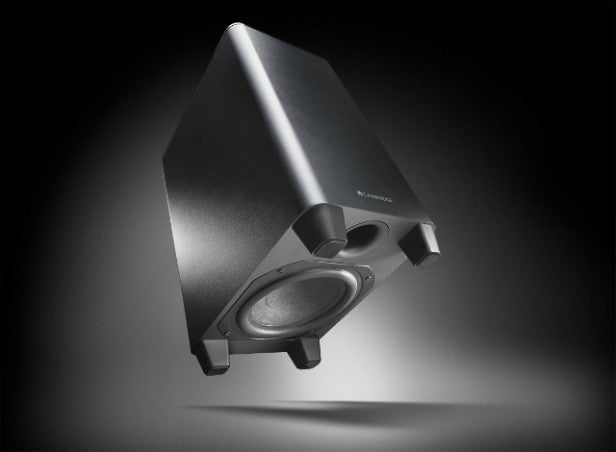 The TVB2 comes with one of the smallest and least-intrusive subs on the market, measuring a measly 180mm wide by 364mm high. The cabinet is styled in a fetching matte-grey finish with lovely curved edges and glossy top trim. It’s solid and sturdy, supported by four thick feet that give the down-firing sub enough room to move air, and since it’s wireless, you don’t have to worry about where you place it.

It may look simple from the outside, but there’s plenty going on behind that black grille. First up, the TVB2 is equipped with two 57mm BMR drivers, as used by Cambridge’s flagship Aeromax 6 speakers. These create sound not only by moving back and forward (in the way of regular speakers) but also horizontally and vertically.

The benefit is that you get a bigger and wider sound and a larger sweet spot than traditional speakers – in other words, sound quality remains consistent wherever you are in the room.

The subwoofer uses a bass reflex design, with a down-firing 10cm woofer and port on the bottom. In total the system offers 120W of Class D amplification, while four EQ modes cater for different types of material – TV, Music, Film and Voice. 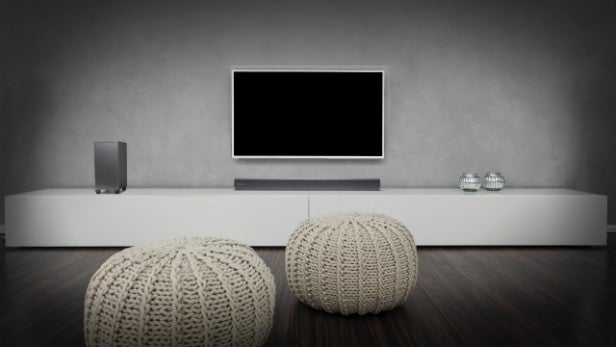 There’s Bluetooth 4.0 and NFC for easy pairing with compatible devices, plus an IR remote learning feature that lets you control the TVB2’s volume using your existing TV remote. An auto power mode switches the soundbar off after 20 minutes of inactivity and fires up automatically when a signal is detected (in less than three seconds).

The TVB2 is ridiculously easy to set up and operate. In fact, the only thing likely to give you any grief is ARC, which involves tinkering with your TV’s setup menu, but even that proved easy on our Samsung set.

The subwoofer paired instantly with the soundbar when they first powered up, and within minutes I was settling down to watch a film. This is the perfect sound system for technophobes.

Sadly, the remote’s plasticky shell doesn’t live up to the quality of the soundbar – but to be fair, the button layout is top drawer. The dedicated subwoofer controls on the remote are very useful, as you can instantly optimise the bass level without having to access a setup menu. The ring at the top makes the EQ modes easy to find, and lower down each input gets its own button.

Fire up Jurassic World on Blu-ray and the TVB2 puts in an impressive performance. It can’t quite match the TV5 or TV2 for power and scale, but it’s certainly an entertaining listen.

What stands out is the soundbar’s excellent detail reproduction. When Owen first enters the Indominus Rex’s paddock, the ambient hum of birds and insects is beautifully crisp, and you can pick out individual chirps and squawks. Subtle effects such as rustling leaves and tinkling glass are pin-sharp. There’s a level of refinement and precision here that you don’t always get from compact soundbars.

The BMR drivers do a great job of spreading out effects, making the stage seem wider and taller than the unit’s size suggests. As the two kids jump over the waterfall, the hiss of water seems to fill the room.

The TVB2’s tonal character is relaxed and even-handed. The strings and flutes in the movie’s score are smooth and silky, while voices sound clear and natural. You can also turn up the volume loud without any straining and hardness.

Sadly, that’s something you might find yourself doing quite often. The downside of the bar’s easygoing tone is that it lacks dynamism at lower volumes. I struggled to hear TV shows and film dialogue with the level below 35 (the maximum is 50), which isn’t particularly helpful if you want to watch a movie or programme after everyone else has gone to bed.

Movie soundtracks come to life only when you push the volume level into the 40s – anything lower and the TVB2 sounds restrained, particularly in a large living room. All that wonderful detail is still there, but if you want bite and excitement it’s go loud or go home. 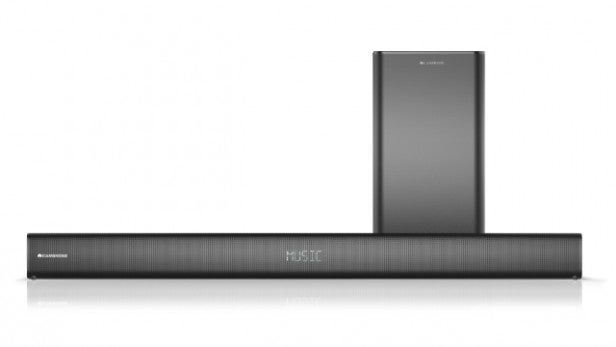 On the plus side, the subwoofer certainly holds up its end of the bargain. You can feel the floor rumble as the Indominus chases Owen out of the paddock with its big, thumping footsteps. Explosions are weighty, while quick Gallimimus footsteps are conveyed with terrific agility. Obviously, there’s a limit on how much power and scale a sub of this size can contribute, but it does a better job than you might think.

Take care, though – push the sub’s volume too high and the sound loses cohesion and control. The soundbar doesn’t contribute much bass of its own, so it’s easy for the sub to overpower it. Judicious use of the bass volume is advised. 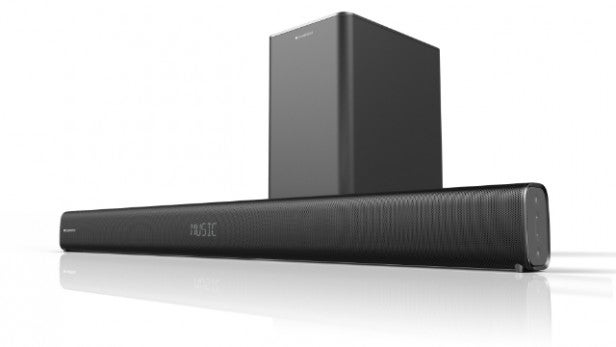 Playing with the four sound modes, Film gives bass a boost; Voice reduces low frequencies while boosting the mid-range; and TV sits somewhere in between. Voice mode slightly improves intelligibility at low volumes, but not as much as I hoped.

So the TVB2 is a bit of a mixed bag with movies, but music is a different kettle of fish. Songs streamed via Bluetooth sound gorgeous, taking full advantage of the bar’s smooth tone and lucid detail reproduction. It’s perfect for laid back genres such as jazz and soul music, but injects enough energy into more up-tempo tunes to get your feet tapping. There’s a pleasing balance across the frequencies and the subwoofer keeps pace with fast basslines and drum beats. 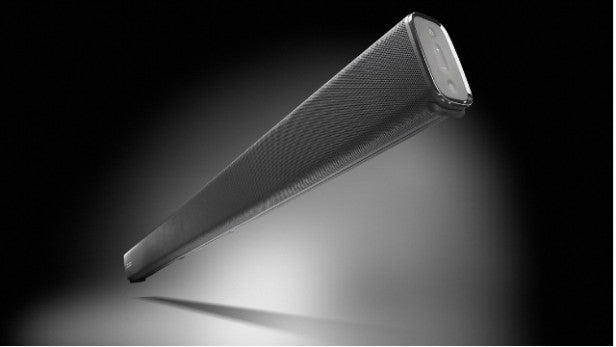 Should I buy the Cambridge Audio TVB2?

The TVB2 is an impressive soundbar in many ways, offering refined sound quality and a discreet design that’ll slip virtually unnoticed into any living room. The BMR drivers emit an immersive spread of sound that’s bursting with detail, while the terrific subwoofer underpins the action with thumping bass. I’m also impressed by the generous array of connections and the hassle-free setup.

The only blot on the copybook is the TVB2’s lack of dynamism at lower volume levels, which makes it tricky to hear all-important dialogue and TV speech. Turning up the volume injects more punch and clarity, but that’s no good if you’re a regular late-night listener.

If that’s likely to be a problem then Orbitsound’s A70 airSOUND Bar is a good alternative, although it’s £200 dearer, while Q Acoustics’ similarly priced M4 is a superior performer but is bigger and bulkier than the TVB2.

Cambridge Audio’s attractive, compact soundbar scores high on sonic refinement, ease of use and features, but lacks the dynamism at lower volumes to satisfy late-night listeners