The A70 is British brand Orbitsound’s latest attempt to breathe life into tired TV sonics. This all-new soundbar is equipped with airSOUND technology, a proprietary system that uses side-firing speakers to create a sense of width and eliminate the stereo ‘sweet spot’, delivering consistent sound quality no matter where you’re sitting.

The stylish, compact soundbar also features Bluetooth for easy music playback and is accompanied by a wireless subwoofer to bring a bit of bass oomph. We’ve been impressed by previous Orbitsound systems like the M10 and SB60 airSOUND Base so we’re hoping this new model will keep the company’s fine reputation intact.

Liberating the A70 from its meticulous packaging, we get an immediate sense of why the A70 costs more than your average soundbar. Its reassuringly weighty cabinet is fashioned from engineered wood and finished in hand-polished high gloss piano black. The company describes it as ‘industrial’ but that really doesn’t do it justice.

The A70 eschews the rectangular shape of previous Orbitsound bars with a curvier design that emphasises the presence of airSOUND technology. The rounded aluminium grilles at the ends of the cabinet draw attention to the side-firing drivers, while the front speakers are hidden behind a pill-shaped grille. 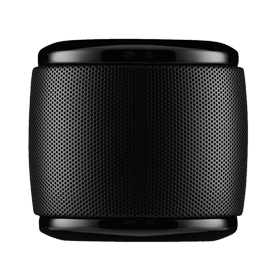 These curves bring a sense of elegance missing from most soundbars, and at 750mm wide by 65mm deep it’s remarkably compact. Rubber feet on the bottom allow you to place it on a tabletop, but you can hang on the wall using the keyhole fixings on the back – Orbitsound supplies the screws and Rawlplugs. 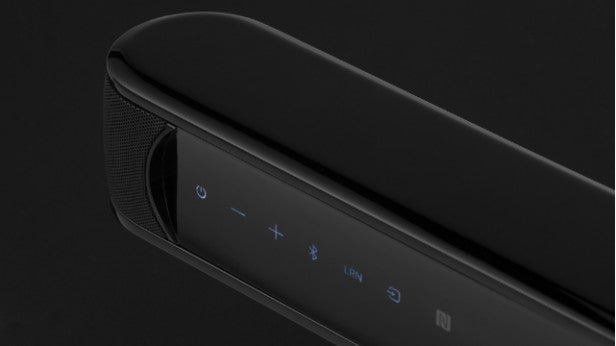 Power it up and you’ll notice a new backlit control panel on the front, a feature missing from previous Orbitsound systems. It lights up when pressed and switches itself off after a few seconds so it doesn’t become distracting in the dark.

To the left of the centre speaker is a row of controls, including power, volume, Bluetooth, learning and input selection. The right side houses a volume meter (which also shows the bass and treble levels when adjusted), the current input and a ‘Sub’ icon that helpfully lights up when the subwoofer isn’t connected.

There are just two sockets on the back – optical and 3.5mm minijack inputs. The lack of HDMI sockets might be an issue for some, but their inclusion would have meant an increase in cost, clutter and complication – hooking up a single optical cable to your TV is a much simpler process.

It may lack the lavishness of the soundbar, but the wireless subwoofer is a well-made and good-looking unit. Its simple matt-black finish, curved edges and circular black cloth on the side make it a smart, unobtrusive addition to your room.

In terms of drivers, two 2-inch midrange drivers flank a tweeter behind the central speaker grille with side-firing neodymium drivers at each end delivering spatial detail. They’re driven by digital amplifiers with a hi-fi analogue crossover, offering a ‘best of both worlds’ scenario, according to Orbitsound. Power output is quoted as 300W.

The ‘S3’ wireless subwoofer communicates with the soundbar via Bluetooth, using an optimised digital bandwidth that guarantees low latency and low interference without affecting normal Bluetooth performance. It uses a side-firing 6.25-inch woofer and dives down to 45Hz.

The A70 supports Bluetooth with apt-X for lossless audio streaming, while pairing is made easy by the inclusion of NFC.

Setting up the A70 couldn’t be easier, one of the benefits of a single-cable optical connection. The bar nestles nicely in front of our 55in set, although the size difference did look a little odd – aesthetically, it’s better suited to TVs between 32 and 42in. 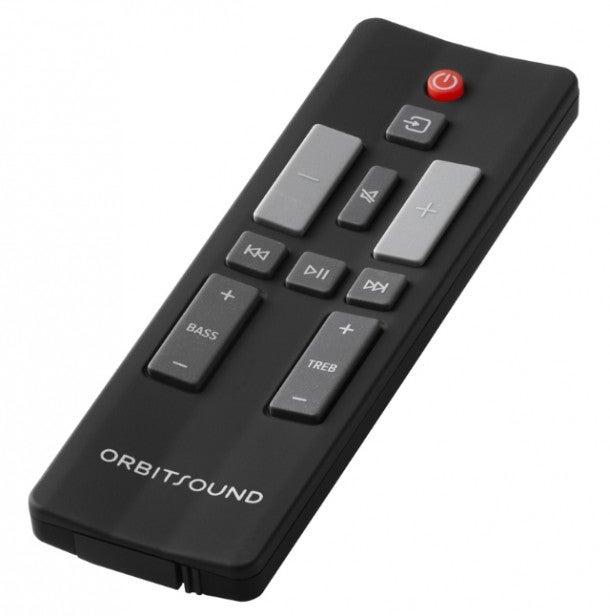 Orbitsound supplies the same remote introduced for the M10, which was a big step up from the dreadful plasticky handset of older models. A lot of thought has gone into the design – the rubberised texture feels nice in the hand, while the large, firm keys are satisfying to press. You can control Bluetooth devices using the play/track skip keys, while dedicated bass/treble controls and large volume buttons make optimisation easy.

There’s a learning remote function, which allows you to control volume using your existing TV remote. Panasonic TVs aren’t currently supported but it works with Sony, LG and Samsung sets.

Don’t be fooled by the A70’s diminutive size – its vast, room-filling sound belies its compact dimensions, investing movies with the sort of scale and excitement that most TVs can only dream of.

The A70 is a hugely entertaining performer, combining weighty bass, a full-bodied midrange and crisp highs to devastating effect. Play a turbo-charged action scene like the Stone Giants battle in The Hobbit: An Unexpected Journey and you’ll see what we mean – as the huge creatures lumber about the screen, the meaty rumble from the sub conveys their size and heft while the soundbar gives out a vigorous crack when they start slamming boulders into each other.

It’s invigorating stuff, but even more impressive is the control and poise with which it handles these scenes. You can crank up the volume to near maximum and there’s nary a trace of distortion or harshness. The sub fuses tightly with the soundbar, never sounding bloated or laggy. It’s not the most powerful sub we’ve tested, lacking a little punch at key moments, but as soundbar subs go it’s a good one.

The presence of a dedicated tweeter makes the sound crisp and detailed. Every scene is bristling with subtle sonic textures that make the action more realistic, such as the rustle of footsteps on grass and the gentle clink of the dwarves’ clothing. The A70 also delivers focused, assertive dialogue that’s packed with detail and cuts through loud action scenes.

As for airSOUND, its effect is subtle most of the time but as promised it does widen the listening area considerably – you can walk around the room with very little drop in treble clarity. But the technology works best during scenes with lots of surround information. As the dwarves make their way through the woods in a downpour, for example, the hissing rain feels like it’s falling around you, spreading far and wide into the room. It’s no match for true surround sound but does provide a more immersive listening experience than most soundbars.

However, airSOUND is a more of an acquired taste when playing music. The side drivers tend to over-emphasise treble, which makes percussive instruments like hi-hats and tambourines a little too prominent – and you can’t turn it off either.

On the plus side, music always sounds crisp and open, offering a consistent tonal balance from any listening position. The agile subwoofer does a solid job with music too, staying tight and focused as it conveys fast basslines and kick drums, while the centre speaker imbues vocals with lots of detail and a silky tone. 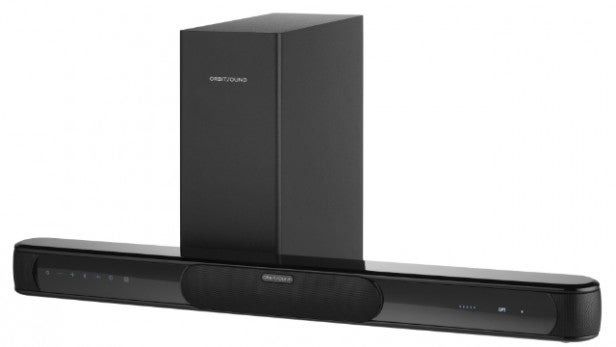 The A70 is more expensive than your average soundbar but justifies the price with an accomplished performance, elegant design and luxurious build quality. If you’ve got this sort of cash to splash on a soundbar then the A70 is a great choice.

Despite its compact size the A70 has no trouble filling the room with sound, but layers it with taut, punchy bass, crisp detail and life-like dialogue. Movie soundtracks are further enhanced by the efforts of airSOUND, which ensures tonal consistency anywhere in the room and an immersive surround-like effect when the scene demands it. The inclusion of Bluetooth, a new front-panel control system and a wireless subwoofer add to the A70’s appeal.

Our only reservations concern the A70’s slightly overzealous high-frequencies when playing music and the lack of HDMI ports, but neither of these is serious enough to deny the A70 our seal of approval.

It’s not cheap, but sparkling sound quality and lavish design make the A70 Orbitsound’s best soundbar yet