Available now on PS4, coming soon to Xbox One and PC

There’s something oddly comforting about going back to Call Of Duty WW2. Not only has multiplayer shooting moved past the shoot-reload-respawn loop in favour of the parachute-grab loot-get killed sequence that the millions of PUBG and Fortnite players know only too well, but WW2 itself is a defiantly old-fashioned version of a series that’s increasingly old-fashioned all on its own. It’s like teleporting back to a decade ago.

Of course, CoD WW2 is about as slick and modern as anything old-fashioned could ever be. Crisp in 4K 60fps on PS4 Pro and still packing the kind of triple-thud punch that CoD always has at its best. This new War Machine DLC pack – the game’s second – doesn’t change that formula at all, merely adding a trio of new maps, an Operation, and a new Nazi Zombie scenario.

The maps themselves are fairly standard Call Of Duty fare, but all are immaculately designed, with some excellent visuals and the classic choke points and multiple points-of-entry you’d expect from the 14th mainline CoD game.

First up is V2, the least visually interesting map of the bunch – but, perhaps, the best geometrically. It’s set in and around a train yard, and features a tall central structure where smart players can gain higher ground. The rest of the map has a typical circular flow, and it’s well suited for Team Deathmatch games.

Domination suffers slightly from the sight lines available from that higher ground, making whitewashes all too common. In TDM, however, this is a fast, sharp map that will test your gun-on-gun ability at all times. 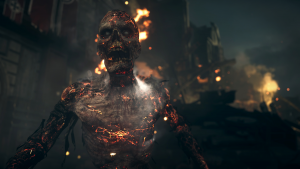 Next, we have the imaginatively titled Egypt, a map that plays out in about as clichéd an Egyptian vista as you could ever hope to see. There’s no denying that those golden sands and sun-bleached stone pyramids look good in 4K, though – we saw them enough in last year’s Assassin’s Creed Origins to know that.

Egypt is a pretty standard CoD map, though. There aren’t huge deviations or standout sections. This makes it a solid map for Domination gameplay, since there are no clear advantages to be had from any one base.

The final arena of the new trio is easily the most iconic. Dunkirk is a familiar environment for cinema-goers of the past 12 months, and Sledgehammer has done great work in capturing some of that faded seaside glamour of the French coastal town, and marrying it to the grim reality of stranded boats, sandbags and the eeriness of an abandoned amusement pier.

The map itself stretches across the beach, making it great for extended games of Hardpoint, but less so for TDM. It lacks the circular flow of great CoD maps and means you can be caught in spawn traps and overly aggressive choke points. A looker, then, but not necessarily one you’ll be voting for in-between rounds.

Outside of traditional CoD multiplayer is the new Operation, entitled Husky. It’s set in Sicily, and charges the attacking team with stealing some intel (essentially capturing three points) while the defending team snipes from windows. Operations sit somewhere between normal CoD gameplay, an Overwatch map, and a game of Rush on Battlefield. While they don’t capture the magic of Blizzard’s effort or the DICE mainstay, they do at least offer some much-needed variety on a formula that’s been successful for over a decade, but is beginning to lose some steam. 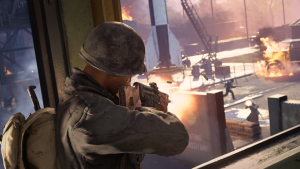 Operation Husky doesn’t add anything new over the equivalent Operation maps in the base game, but it does present an enjoyable scenario to plough through. It’s best played with a team on voice comms, too, since battling to get into the main house is a nightmare of attritional fire and a lack of cover, but can be achieved by flanking from both sides. Good fun.

Finally, a Nazi Zombies map set in Berlin rounds out the package. Zombies mode is very much a love-it-or-hate-it affair – some say it’s a poor man’s Left For Dead (correct people); others love the way you unlock parts of the map as you go. This is a slightly more serious take on Zombies than we’ve seen in some DLC packs in the past, but in truth, if you don’t like this game mode, this isn’t going to change your mind.

The zombies themselves are nastier, scarier fiends than we’ve seen before. They hunt at speed, but it’s still all to easy to see them as fodder. There’s no real tension in this new map, as there never is in Zombies. Well made, good-looking, but ultimately, pretty empty.

So, like many others over the years, War Machine is a serviceable DLC map pack and nothing more. There isn’t anything here that alters the dynamics of the gameplay, no new modes or ideas – just good, solid environments in which to do the same kind of battling you’ve been doing for years.

Chances are, if you’re that much of a fan, you’ve already got it.