Even after all this time, Burnout Paradise remains an absolute blast to play. The upgrade to 60fps in Remastered only heightens the adrenaline rush, and the game’s emphasis on exploration and quick-fire racing make it a brilliant fit for being taken on the go.

After the runaway success of Animal Crossing: New Horizons, the Nintendo Switch’s release schedule has been somewhat barren as far as major first party titles go. In their place however, Switch owners have been subject to a bevy of ports from Xenoblade Chronicles: Definitive Edition to Bioshock: The Collection, and now EA’s getting in on the fun with Burnout Paradise Remastered.

It’s strange to think that there hasn’t been a major entry in the Burnout series since Paradise in 2008, but there’s no denying that the title’s simple pick up and play style gameplay feels like a perfect match for Nintendo’s hybrid console – and for the most part, it is.

Anyone who’s played a Burnout game before will know that unlike more realistic driving simulators like Forza Horizon 4 or DiRT 4, Burnout’s always prided itself on rewarding players for creating as much carnage as possible. This involves smashing fellow contenders off the course during a street race – rewarding you with a boost in the process – to creating a monstrous pile up in an attempt to see how much of a bill you can rack up. It’s wacky, absurd and I love it.

For the first time in the series however, Burnout Paradise shook things up by expanding that same gameplay into an open world setting. From the get-go, players are free to explore Paradise City at their own pace and start races and challenges wherever they see fit. Combine this relaxed approach with the short time it takes to actually complete these races and you’re looking at a game that arguably works best in a portable format. 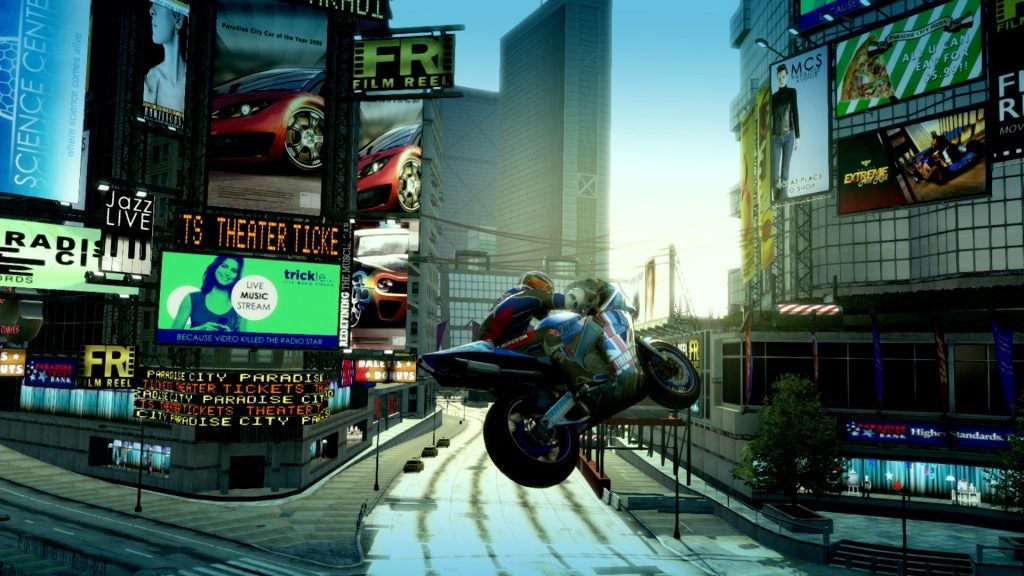 While my experiences with public transport have been few and far between in the last couple of weeks, being able to dive into an adrenaline-inducing race during a train ride felt like a great way to pass the time. Given that the Remastered package also includes all of Burnout Paradise’s DLC on top of the countless amounts of trials and challenges already available, there’s a lot of content here to keep players busy.

As if that wasn’t enough, Burnout Paradise Remastered features one of the best soundtracks I’ve come across. Maybe it’s the fact that I was raised on a steady diet of Guitar Hero and Kerrang Radio, but the soundtrack’s focus on rock anthems plays exactly into my tastes.

When you fancy taking the action online, Burnout Paradise’s matchmaking system is so seamless, it makes me wonder why more games haven’t tried to adopt it in the years since. All it takes is a simple tap of the D-Pad and you can jump into the online mode of your choice while you’re still driving. For a fast-paced game like Burnout, the less time spent navigating menus the better, and this does the trick perfectly.

Unfortunately, the same praise can’t be afforded to the game’s attempt at implementing local multiplayer. Instead of having a dedicated split-screen mode, the game has ‘Burnout Party’, which sees up to eight players compete for points by pulling off certain challenges like being the fastest to reach a destination or landing certain tricks. 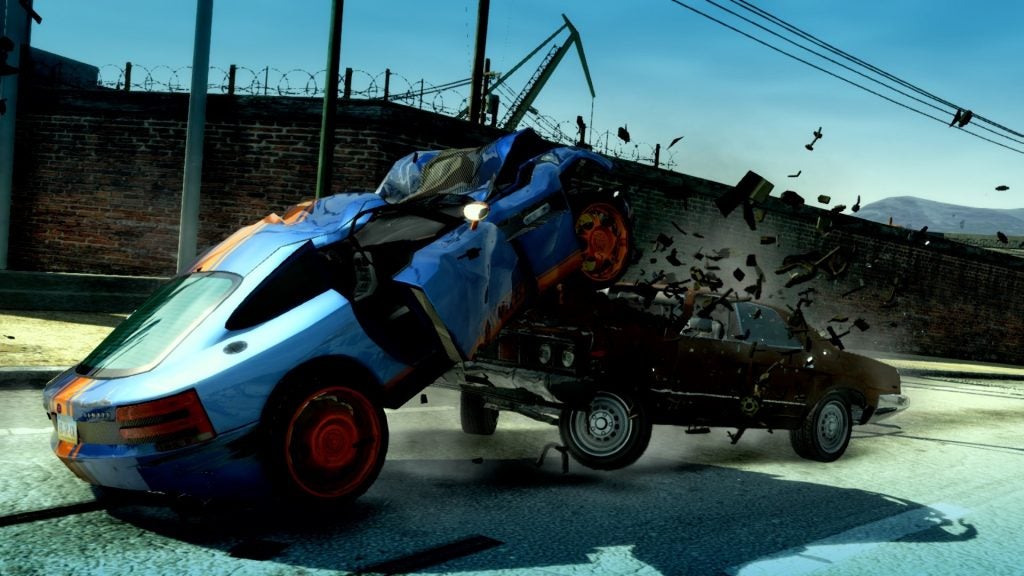 It sounds entertaining enough, but the mode relies on passing the controller from person to person. Given that the Nintendo Switch has become a bastion for local multiplayer – boasting two controllers out of the box – it seems jarring that Burnout Paradise Remastered doesn’t capitalise on this in any way.

In fact, very little has changed in this port over the game’s initial release over a decade ago. Small gameplay quirks such as the inability to fast-travel or retry races have somehow survived the test of time despite well-documented criticism being levelled at them years ago.

Due to the Switch’s limitations, this port of Burnout Paradise Remastered can’t achieve the 4K heights of its counterparts either, although the game’s 60fps action runs surprisingly well, and I never came across any moments of lag or graphical tearing. What did stand out however were the atrocious load times that occur whenever you swap out your car for something different at the Junk Yard. At one point, I spent an entire minute staring blankly at the screen, wondering if the game had crashed before the return of the HUD brought me back to earth. 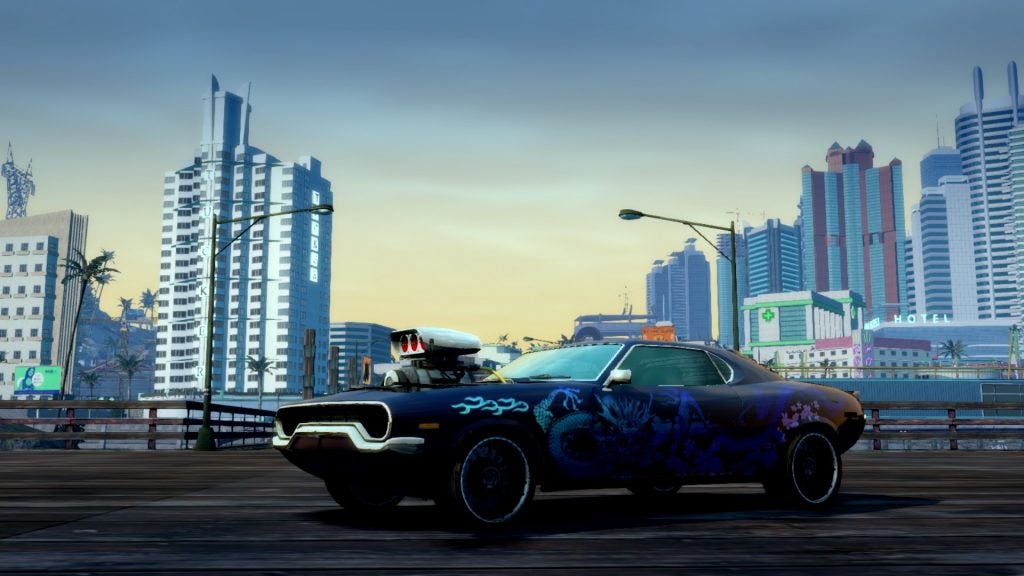 The only addition to the Switch port, I kid you not, is the ability to use touch controls on the menus and the map screen. That’s it. If that’s a feature you were clamouring for then more power to you, but to me that’s a huge disappointment, especially given the elephant in the room – the game’s pricing.

At the recommended retail price, Burnout Paradise Remastered on Switch will set you back a whopping £44.99. That’s almost the same price as a brand new first-party game from Nintendo. Even Bioshock: The Collection – which contains three games – had a noticeable ‘Switch tax’ added at £39.99.

Why EA thought that £44.99 is a justifiable price for a core game that’s 12-years old with a few minor updates is beyond me. It pains me to say this as I’ve still thoroughly enjoyed my time with Burnout Paradise Remastered for Switch, but at the current asking price, it’s simply not worth it.

Even after all this time, Burnout Paradise remains an absolute blast to play. The upgrade to 60fps in Remastered only heightens the adrenaline rush, and the game’s emphasis on exploration and quick-fire racing make it a brilliant fit for being taken on the go.

With an absurd asking price and very little to make this version stand out against its PS4 and Xbox One counterparts however, Burnout Paradise Remastered is better saved for the next eShop sale, unless you’re absolutely craving another racing title for your Switch library.