Forza Horizon 4 kicks off with a showcase that drops you right into the action, barrelling through all seasons in a variety of cars. It’s a taster menu that showcases a few of the delights that the open-world racer is going to bestow upon you in the future.

As a nearly lifelong resident of England though, all I could think was: what version of England is this?

Planes fly low, hot air balloons hang in the clear sky and the different seasons immediately add a new angle to racing. But as each season is suitably distinct, it’s also a long way from England in the real world, which has been serving up consistently disappointing shades of grey for most of my life.

The end of that showcase had me cruising through the maybe-fictional town of Ashbury at 200mph. “Smile, the crowds have come out to see the race” said a voice in my ear, as confetti pops over the car. I’m glad that I’m moving so fast, as it saves me the embarrassment of explaining that I’ve just levelled the town’s welcome sign with my sports car, in addition to several ancient walls as I drifted around a corner on the way into town. 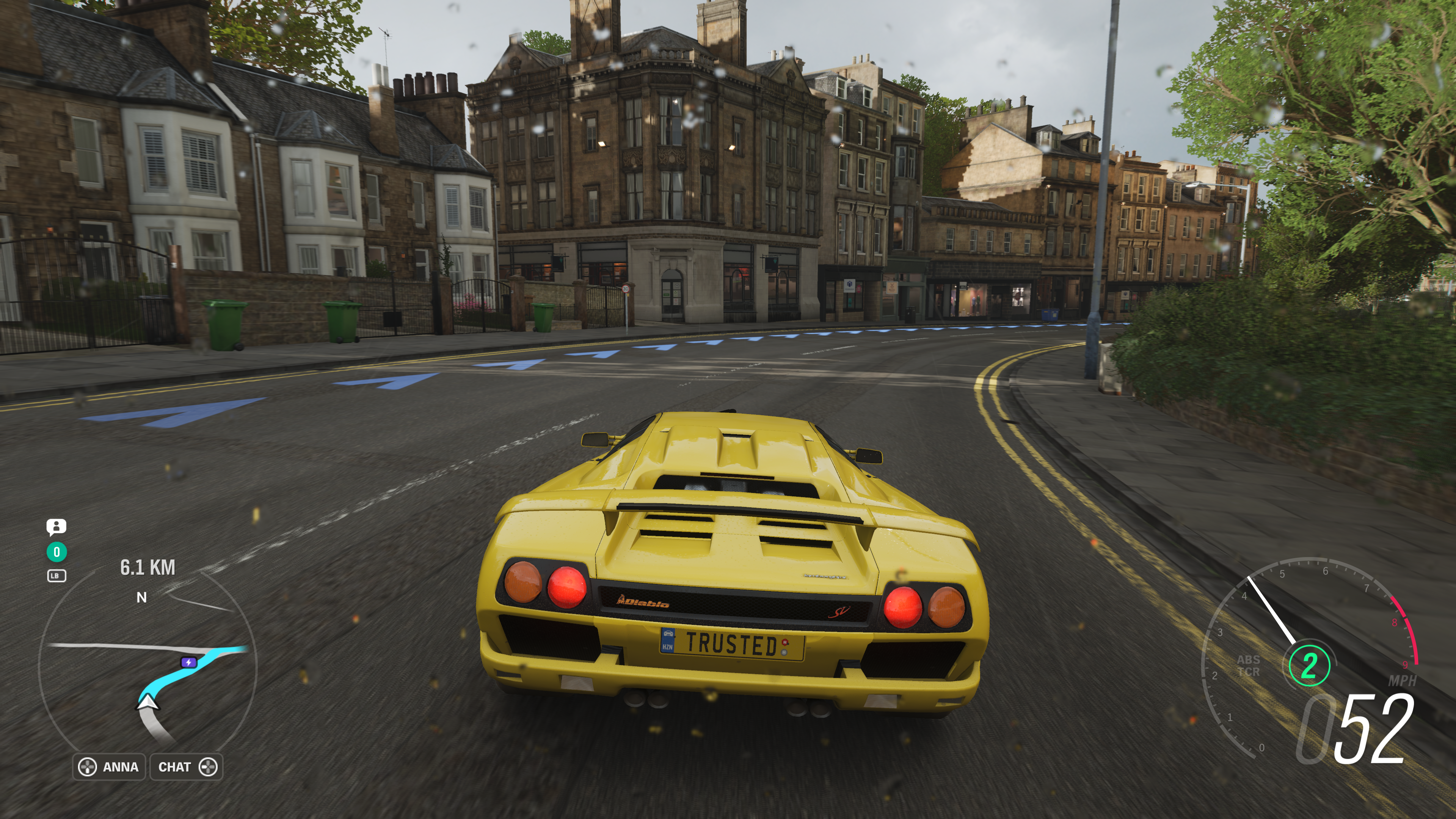 Sure, this isn’t a real vision of our little island, but as Bill Bryson said in Notes From A Small Island: “I like it here. I like it more than I can tell you.”

Part of my adoration is that there’s just so much stuff here. Forza Horizon 4, for those unfamiliar with the series, is an open-world racer closer in tone to Test Drive Unlimited than Burnout Paradise, with the wealth of content on offer in this iteration spoiling me for choice. Your favourite car is undoubtedly here, be it a 1997 Lamborghini Diablo, several different models of Subaru Impreza or the iconic Warthog from shooter Halo.

You can buy houses to fast-travel around the map, and they also let you customise your character. Want to wear shark wellies and a gold top-hat? You can do that here.

We’re here for the cars, though. These cars, dozens of them, are thrown at you as rewards for your performance, via an in-game auction house, in the game’s shop, via free loot box-esque ‘wheelspins’ and even within barns hidden in the game world. They’re the real star of the game, and every one of them is viable within Playground Games’ caricatured vision of Scotland. They’re nearly perfectly modelled, and many of them come with body kits and upgrade paths, letting you tune and tweak to your heart’s desire. If you don’t fancy that, you can get the game do it for you, putting down a chunk of change to drive away with a car at the performance level you want. There is a ridiculous amount of fan-service in the game, which means I can have a car horn that plays the Halo theme, or the Windows XP shutdown noise. A pre-order bonus means I can drive the Lotus Elise from Bond classic You Only Live Twice, and the game sidesteps the classic car game trope of making me plow around in a Honda Civic for several hours before I get to play with the big boys. Unless you pick the Ford Focus as your starter motor, but that is your lookout.

The map is littered with different types of events: dirt racing, road racing, cross-country drives and even some semi-legal street races. However, while there’s clearly an optimal type of vehicle for each race: rally cars will have a better time in dirt races for example, whatever car you show up in, the game will fill the field with other cars from that class, meaning you can do a cross-country race in your top of the line Bugatti Chiron, and the game will pit you against similar cars. That way you can all ruin your supercars together.

If that doesn’t suit, the game’s showcases see you facing off against a hovercraft, a train, or even a team of motorcyclists.  If you want to avoid the events, make like an ostrich and bury your head in the sand, the open-world has you covered. You could find yourself acting as a stunt driver, ramping over a windmill or taking a vintage sports car on a fast pursuit down a country road. Maybe you can find the barns, or tear past a speeding camera or speed trap. The world is so detailed and fun to drive around, you could just get into whatever your daily driver is and tear around the streets at eyebrow-raising speed, maybe if you’re lucky you can go back in time and reverse that whole Brexit palaver before the whole country gets overrun by nationalist fish, or something equally horrific, like us leaving the free market, making the cheap and timely importing of all of these sportscars incredibly expensive. 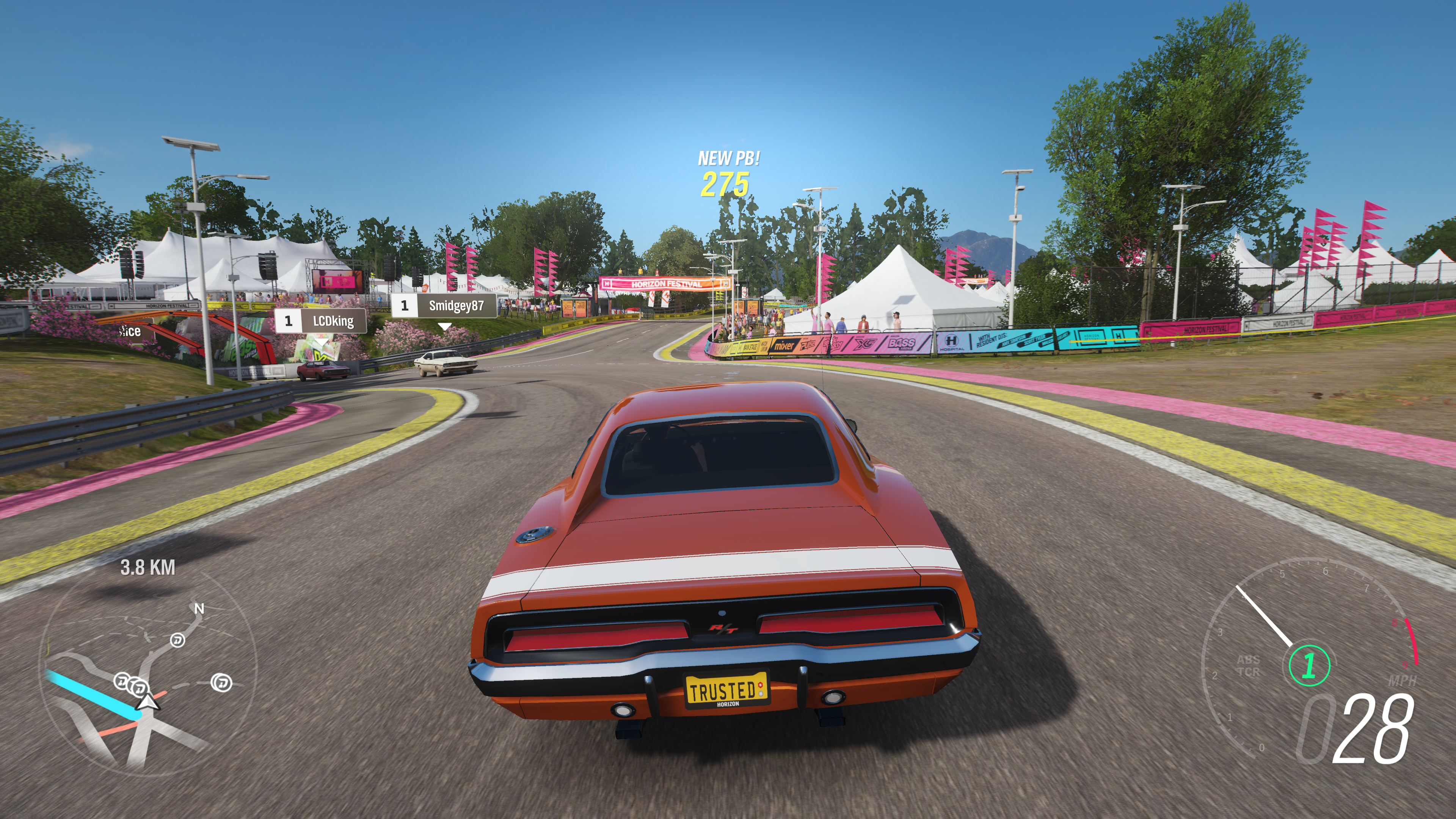 It doesn’t really matter what you do in Forza Horizon 4, you’ll be rewarded for it. You can get experience points for streaming, creating custom car designs, and all of the different types of racing. Rather than a racing game, Forza Horizon feels more like a car game. That you interact with 95% of the time by competing in races.

All of this is backed up with a solid soundtrack, with radio station voiced by actual DJs. I found myself listening to Hospital Records a lot, voiced by the two stars of Hospital’s podcast, listening to drum and bass tracks signed by the label. These asides are interesting, well written and often relevant to what’s going on in the game. Coupled with that is the fact that Forza Horizon 4 is absolutely stunning. The screenshots here, cut down from 4k to 1280 x 720, don’t do the game justice.

Cruelly, most of the game’s detail is lost at high speeds, and it looks best in motion. The way the snow flies off of a tyre during a burnout, or a tree spinters after you crash, ahem, navigate through it, all add to one of the nicest looking game worlds I’ve seen this year. That you go past it in a motion-induced blur is heartbreaking, but doesn’t make it any less impressive.