What is the Bose SoundTouch 30?

SoundTouch 30 is a wireless music system that streams songs via DLNA, Spotify, Deezer, internet radio and Bluetooth, as well as forming part of a multiroom network with other SoundTouch speakers. It’s one of three new wireless systems from Bose, sitting above the £170 SoundTouch 10 and £350 SoundTouch 20.

These “Series III” models improve on their Series II predecessors with a new dual-band wireless platform that offers faster speed, better range and less interference with other Wi-Fi products. Bluetooth has also been added, but at the expense of AirPlay support. 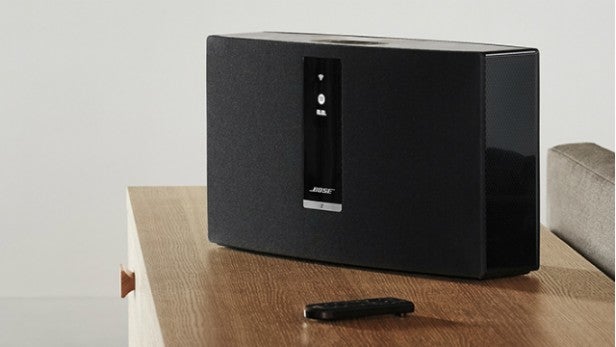 With its big chunky enclosure and black styling, SoundTouch 30 could hardly be described as elegant or compact, but it still cuts a fine figure. The front and back of the rectangular cabinet are gently curved, and the lack of button clutter results in a pleasingly minimal look. Its sizeable dimensions (246mm high by 180mm deep) should create enough cabinet volume for a loud, room-filling sound. 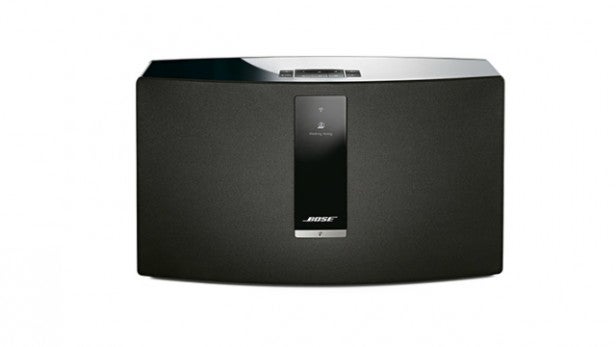 The curved fascia is dressed in black cloth, with a 1.6-inch OLED display in the centre. This hi-res display is sharp, and with three lines of text at its disposal there’s enough room to fit long song titles without scrolling. A silver panel below the OLED display adds a touch of glamour, while an illuminated Wi-Fi icon at the top tells you it’s online. 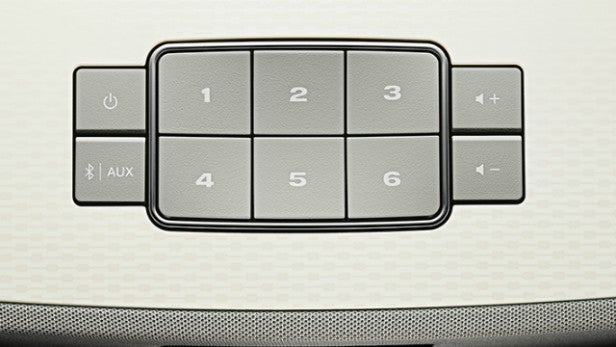 The grey pattern covering the glossy top and side panels is eye-catching. Embedded into the top is a panel of large buttons, dominated by six numbered preset keys that let you access favourite tracks, albums or radio stations quickly – one of the SoundTouch 30’s most useful features. Power, volume and input buttons complete the selection. 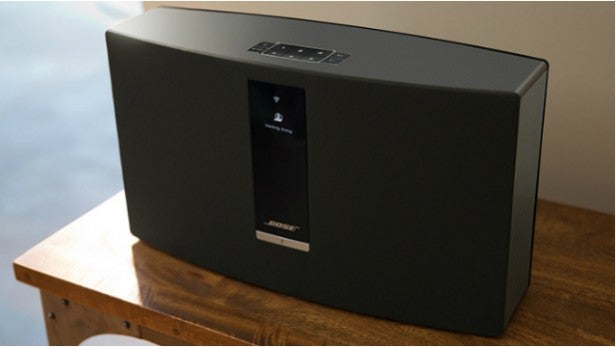 A carry handle on the rear comes in handy when moving the Bose into position – it weighs a hefty 5kg – and rear connections include a 3.5mm mini-jack input, Ethernet and two USB ports (Micro and Type A) for firmware updates.

Thanks to its built-in Wi-Fi connection, the SoundTouch 30 lets you stream music from servers on your home network, such as PCs and NAS drives, as well as Spotify, Deezer and internet radio. You can link up several SoundTouch devices in different rooms and enjoy the same music through them all, or send different sources to individual speakers. These functions are carried out through Bose’s SoundTouch controller app, available for iOS and Android devices. 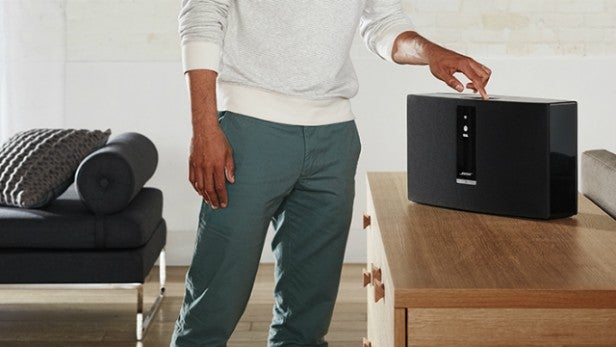 There’s built-in Bluetooth for non Wi-Fi devices too, and an auxiliary input for everything else. But there are a few holes in the feature list – there’s no AirPlay support, which might deter Apple devotees, and no hi-res music playback either. I tried playing a range of hi-res FLAC, ALAC and WAV files, but each one was greeted by an error message. It does play “regular” FLAC and WAV files, but that will prove scant comfort to audiophiles. 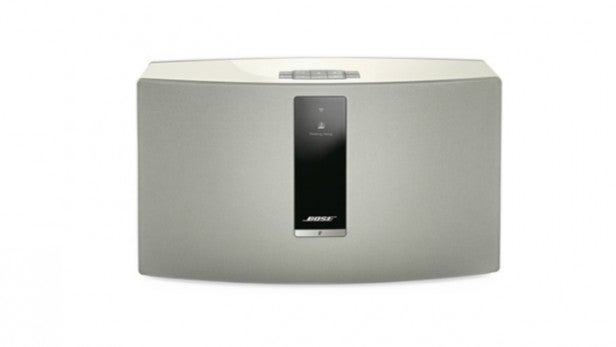 In terms of audio features, the SoundTouch 30 uses a ported box design with two custom-made mid-range/high-frequency drivers with exclusive waveguide technology and a subwoofer to give bass frequencies a boost. Bose doesn’t quote power figures for the unit.

Getting the SoundTouch 30 up and running is a simple process. Like most multiroom speakers, setup is handled by Bose’s SoundTouch Controller app (available for iOS, Android and Amazon Kindle Fire), which guides you through every step of the process.

Helpfully, you don’t have to press any buttons to kick-start discovery – just plug it in, run the app and enter your Wi-Fi password. It doesn’t take long, but during the process you have to register with Bose, which results in a few annoying emails. 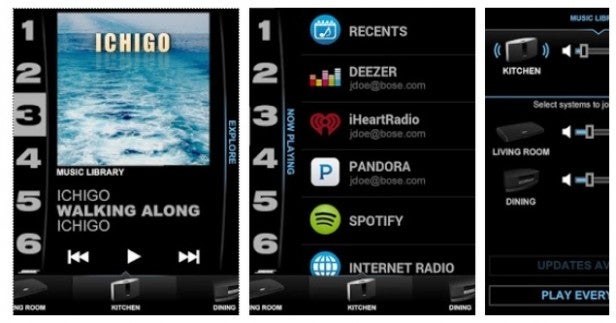 The app itself looks professional and works like a dream. The intuitive layout places tabs at the edges of the screen, which you can swipe inwards to switch menus.

Swipe the “Explore” tab and you’ll see a list of music sources, including Spotify, Music Library (PCs, NAS drives), Internet Radio, Bluetooth, Aux In and Add Music, the latter allowing you to add new music libraries or log into any streaming services you subscribe to.

While browsing music libraries, the lists are logically structured and lightning-fast. The app scrolls through huge music libraries without much hesitation – I whizzed down a list of more than 900 albums on my NAS drive and it needed only a brief pause when it reached “M”.

There’s also an excellent search tool, which looks through all your music libraries for tracks, albums or artists. It may sound unremarkable but not all multiroom apps can do this – most only search for songs stored on your phone.

Play a track and it jumps to the Now Playing screen. The design is well thought out, displaying metadata in large capital letters (with the track title stylishly written in bold type), as well as cover art and pause/track skip controls. Tap the artwork and the screen zooms out to reveal a track time bar, plus repeat and shuffle options. Annoyingly, you can’t skip to a later point in a song, which isn’t helpful if you want to get to the good bit.

On the left-hand side of the app are six numbered presets that let you store favourite albums or radio stations. These correspond with the buttons on top of the unit. To set them, just hold down the desired preset button during playback.

A tray at the bottom of the screen displays the speaker name and volume level. To configure multiroom playback, swipe the banner upwards and you’ll see all connected SoundTouch systems – you can use this menu to group speakers together, or create multiple groups if you have four or more systems.

Unusually, Spotify is incorporated into the SoundTouch app, which is simple and cohesive. Bose’s menu uses similar options as the main Spotify app, including featured playlists, genres and moods, charts and a search function, plus it even saves stuff you play in the Recents menu. You can, however, use the main Spotify app instead and stream to the Bose via Spotify Connect.

If you like doing things the old-fashioned way, the Bose comes with an excellent physical remote. The entire handset has a pleasant rubbery texture and the logically arranged buttons are satisfying to press. It’s a pleasure to use.

After listening to a variety of songs through the SoundTouch 30, its sound is best described as “meaty”. Burly bass output and a tight, cohesive union between the drivers and subwoofer makes music sound remarkably solid and punchy.

I’m also taken aback by how loud and powerful it is, filling a cavernous living room without really breaking a sweat. Throw it on at a party and it won’t have any trouble getting the crowd going. 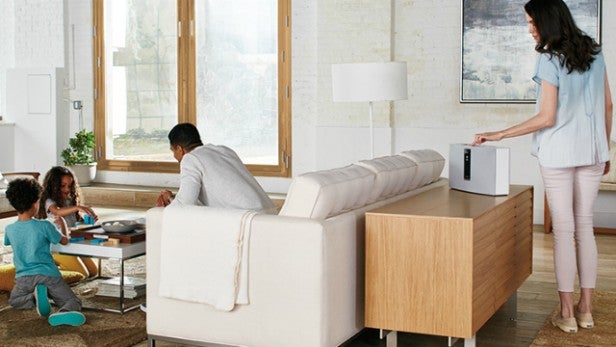 Play an energetic song such as “Uptown Funk” by Mark Ronson and the infectious “doh” bassline and big slapping drums throb through your chest, while the guitars, vocals and brass licks are fired into the room with dizzying gusto.

Throw on something more chin-scratching such as “So Real Surreal” by Carl Hudson and the spacey jazz-funk groove is deftly handled – the synths and keys have warmth and body, while the live drums and bassline are handled with pleasing agility. 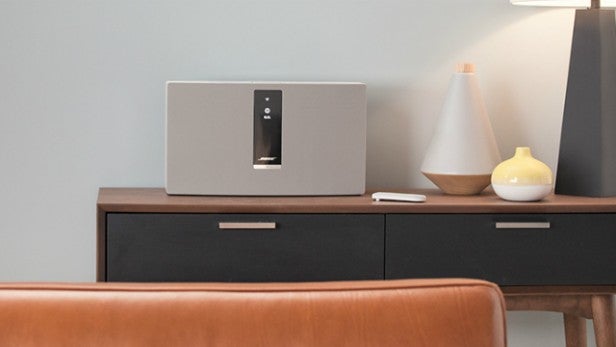 There’s decent clarity here too. Hi-hats are crisply conveyed and snare drums have a nice slap to them. Switch to Corinne Bailey Rae’s cover of “Munich” and the Bose identifies the fragility and detail in her voice.

That said, the Bose’s sound can become a little dense and congested, particularly when you start turning up the volume. Its rich, bottom-heavy presentation comes at the expense of openness and breathing space. Placement and imaging become slightly lost within the Bose’s weighty wall of sound.

What’s more, the mids and treble could do with a little more refinement – certain instruments and vocals flirt with hardness, a far cry from the silky top-end and gorgeous layering of the B&W Zeppelin Wireless and Naim Mu-So, or to a lesser extent the Denon Heos 7. On the whole, however, there are many more positives than negatives in the SoundTouch 30’s performance. 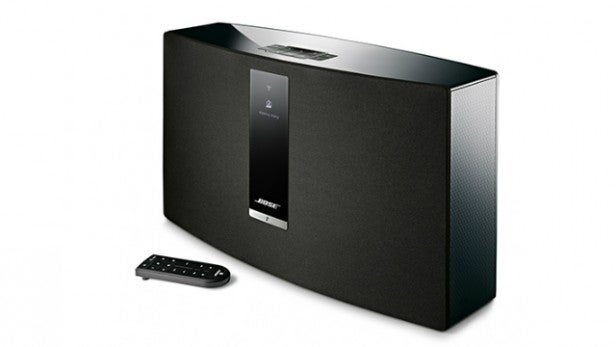 Should I buy the Bose SoundTouch 30?

Outstanding build quality, hassle-free operation and powerful performance make the Bose SoundTouch 30 a good way to spend £500. The smartphone app is among the best I’ve tested, working with rare swiftness and offering useful features such as NAS drive searching and Spotify integration.

In terms of sound, however, it isn’t the best you can buy for the money. A slightly congested output and lack of finesse make the B&W Zeppelin Wireless and Naim Mu-So better options if sound quality is your number one priority, while the lack of hi-res support and AirPlay might be deal-breakers for audiophiles and Apple devotees.

Not the last word in sound quality, perhaps, but the SoundTouch 30’s room-filling performance, decent features, slick smartphone app and premium construction make it worth a punt.