What is the Denon Heos 7?

The Heos 7 is Denon’s range-topping multiroom speaker, positioned above the £299 Heos 5, the £249 Heos 3 and the portable Heos 1.
Like Samsung and Sonos, Denon’s speakers are ordered by size and as the
largest speaker in the range Heos 7 is designed to fill big living
rooms and other open spaces.
My main criticism of the Heos 1
was that Bluetooth was only available as an optional extra, but since
then Denon has sensibly taken the decision to throw in a free Bluetooth
dongle with the Heos 3, 5 and 7, allowing you to stream music from a
wider range of devices at no extra cost. 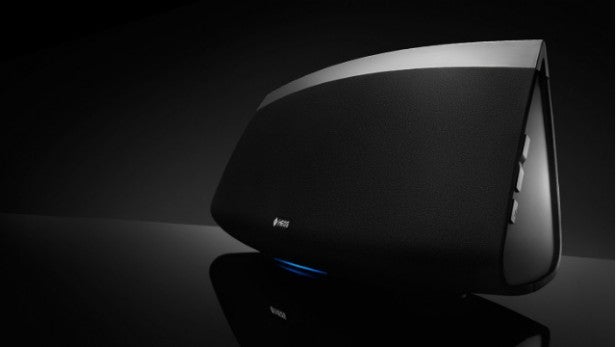 Whereas
the Heos 1’s rugged compact enclosure was designed for portability,
Heos 7 has living room centrepiece written all over it. Its distinctive
angles and curves are pure eye candy, particularly with the gentle blue
light glowing underneath, while the black cloth and brushed metallic
apex form a striking combination. Even more impressive is the Heos 7’s
build quality – it’s solidly made and surprisingly heavy, easily
justifying every penny of the asking price. It’s relatively big for a
wireless speaker, but that’s because it has some big rooms to fill.
The
volume and mute controls are confined to the right-hand side, keeping
the cloth-covered front surface free from clutter. At the opposite end
is a 3.5mm headphone output (not found on the other Heos models) while
the back end houses a 3.5mm minijack input for non-wireless devices, a
USB port that lets you play music from external drives and an Ethernet
port. A button labelled Connect links Heos 7 to your router.

Thanks
to its dual-band Wi-Fi connection, Heos 7 allows you to stream music
from smartphones, tablets, NAS drives, PCs… anything with an internet
connection basically.
If you want to broaden your musical
horizons there’s a range of music streaming services inside Denon’s free
Heos app for iOS and Android. The generous selection includes regulars
like Spotify, Deezer, Napster, TuneIn and Rdio, plus less common apps
like TIDAL and SoundCloud.
The key feature is multiroom
playback. Place Heos speakers in different rooms around the house and
you can use the app to beam music from various sources to any of them,
or group speakers together and play the same thing through them all.
Cleverly you can send music from devices connected to the USB or
analogue inputs to other speakers in the system. And don’t forget you
can beam music via Bluetooth using the supplied dongle, although it’s
still a shame that Bluetooth isn’t integrated as it would free up the
USB port. 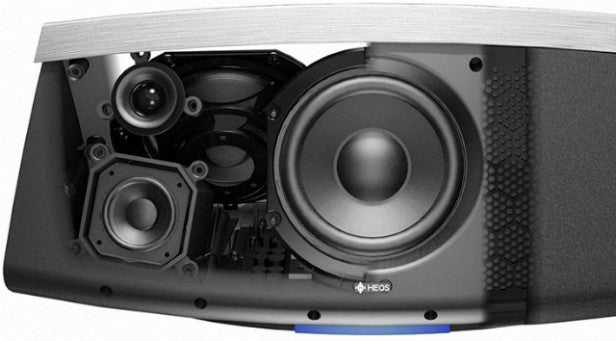 Like
most multiroom speakers you need to install the Heos app and follow the
onscreen instructions. But Denon’s method is unusual in that you have
to connect your phone to Heos 7 using the supplied 3.5mm cable, which
transfers your router’s password to the speaker. It’s seems a bit old
fashioned but it works.
Once you’ve connected the first
Heos, you can add further speakers by hitting the ‘Add Device’ option
and going through the process again, although this option is harder to
find than it should be.

The
Heos smartphone app is one of the best around. The layout is fancy but
uncomplicated, using familiar icons and legible text on every page. My
music library contains over 17,000 songs but the Heos app scrolled down
the list at great speed – a far cry from Samsung’s app, which pauses
after every swipe to load the next batch of songs or albums.
There
are three tabs at the bottom of the screen – Rooms, Music and Now
Playing. The Rooms tab displays all connected Heos speakers, which can
be grouped together by dragging and dropping the tiles onto each other.
You can even play music in stereo through two grouped speakers. 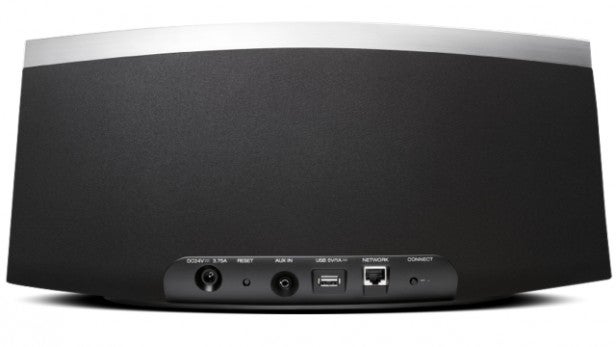 I
linked up a Heos 7, 5 and 1 in a three-way multiroom system and the
whole thing was a breeze from start to finish. The app found each
speaker immediately, and there were no problems grouping them together. I
sent a track from Spotify to the Heos 7 in the living room while
playing songs from my NAS drive on the Heos 5 and 1 in different
bedrooms, and the app wasn’t phased in the slightest by these multiroom
gymnastics.
The Music tab displays all available streaming
services and sources. Each tile is clearly labelled to help you find
your music (‘This Phone’, ‘Music Servers’ and so on). The Now Playing
screen packs in all the info you need, accompanied by cover art,
transport controls and a volume slider. On the downside there’s no time
slider for skipping to the middle of a track.
The app saves
every track you play in the playlist queue, unless you select the ‘Play
Now & Replace Queue’ option when you select a track. Otherwise it
repeats tracks you just played, which can be annoying.
Regular
Spotify users shouldn’t need to visit the Heos app very often, as
playback is controlled from the Spotify app. Just tap the Spotify
Connect logo and the Heos 7 is listed in the ‘Devices Available’ menu.

It
should come as no surprise given Denon’s enviable hi-fi heritage but
the Heos 7 is a cracking performer. What strikes me first is the sheer
density of the sound, with thick, tightly-fused bass giving everything a
warm and punchy quality.
That’s a real bonus when playing
bass-heavy stuff like hip-hop or house – Snoop Doggy Dogg’s Doggystyle
album sounds remarkably muscular, with those buzzy basslines and tight
kick drums pumping into every corner of the room. If I’m being picky, it
perhaps overplays the bass aspect, which means fans of a leaner sound
might find it a little overbearing, but you can always tweak the bass
and treble settings in the setup menu.
This
room-filling talent is one of the Heos 7’s key features and a
compelling reason to select it over the Heos 5 or 3 if your living room
is particularly cavernous. It uses those five amps and formidable
drivers to deliver a hugely powerful soundstage, and that’s with the
volume just over half-way – I didn’t have the nerve to crank it any
further for fear of the police getting involved.
But it’s
not all about power. Heos 7 also offers an abundance of sonic detail,
which lends pleasing texture and authenticity, as well as making the
soundstage open and airy. The busy Latin percussion in Brand New Day by
Louie Vega is a real treat, with crisply-rendered shakers, bongos and
hi-hats rhythmically interweaving within the spacious stage while other
instruments fill the gaps in between. There’s clear separation and a
lovely sense of width thanks to the generously spaced left and right
drivers (another benefit of the Heos 7’s size).
What’s more,
excellent dynamics give uptempo songs lots of energy, while the solid,
detailed midrange makes voices sound engaging and intimate. And the best
part is that the Denon treats music from any source with the same
respect despite the fluctuation in quality, be it Spotify, DLNA or a
device hooked up to the analogue jack. 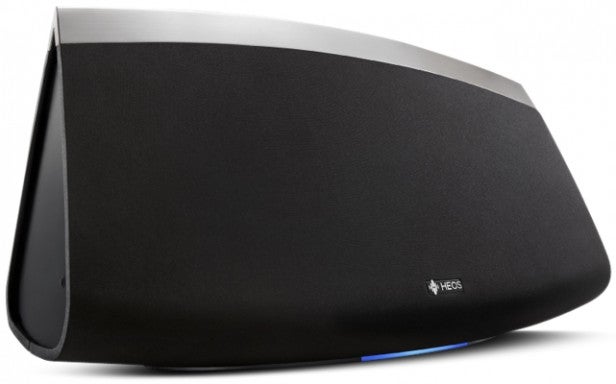 Should I buy the Denon Heos 7?

Heos
7 is not a cheap wireless speaker by any stretch of the imagination,
but it easily justifies its price tag with a refined, room-filling sound,
superb design and a top-drawer feature set – now enhanced by the
sensible inclusion of a free Bluetooth dongle.
I love the
stylish, versatile Heos app, which handles seemingly complex multiroom
operations in its sleep while providing access to a generous range of
music sources and streaming services. What impressed me most is how it
navigates through huge music libraries so quickly and obediently. Setup
is easy too, despite using an old-fashioned cable as part of the
process.

But in the end it comes back to that killer sound
quality, which makes Heos 7 a top choice for those who want to fill a
big room with sweet, sweet music.

This
stylish, luxurious multiroom speaker delivers a big sound for big
rooms, backed up by a slick and professional phone app that lets you
access a wide range of streaming services and music sources