Introduction
Borderlands 2 marks the beginning of a fourth quarter dominated by big first-person shooter games. Big hitters like Call of Duty: Black Ops 2 and Halo 4 are pencilled in for release in a couple of months time, and Borderlands 2 will need to be on point if it wants to stand up to the FPS big boys.

While Borderlands was a relatively low-key release back in 2009, it turned out to be a rough diamond. As a result, expectations are incredibly high for Borderlands 2, which is available for under £40 on Xbox 360, PS3 and PC. 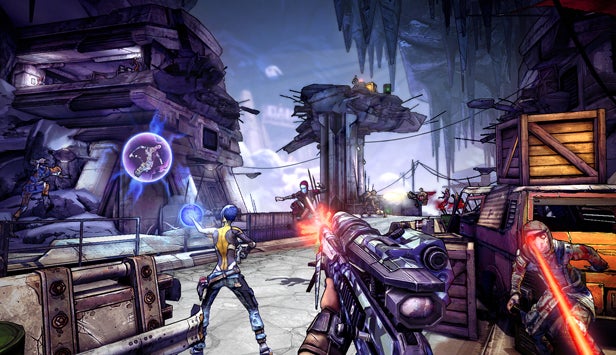 Borderlands 2 Storyline
Borderlands 2 begins five years after the events of the original Borderlands. The Atlas Corporation has been put out of business and the Crimson Lance is gone for good. But where one weed has been uprooted, another has taken its place, and Hyperion is that weed.

Hyperion has taken control of Pandora, and its leader – Handsome Jack – has stolen credit from the original Vault Hunters for both finding The Vault and taking down The Destroyer at the end of the first game. Jack has made everyone outside Hyperion into outlaws, including yourself, and it’s very much a case of killing him before he kills you. 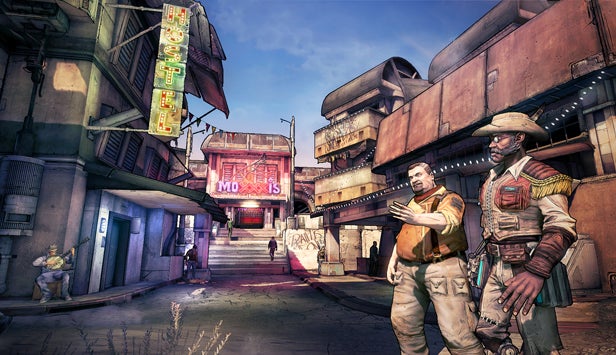 Borderlands 2 Characters
The Vault Hunters from the original Borderlands do make an appearance in Borderlands 2. Now though, they are non-player characters, and seeing them as part of the game world does feel a bit odd at first.

The sense of humour and personality that characterised the first game has been retained, in large part via the excellent voice acting. Claptrap returns as a star performer, and is humorous and loveable in equal measure, but there are plenty of new story characters all of whom have fantastic depth, and do a great deal to bring the Borderlands 2 world to life. Chief among them is Sir Hammerlock, a cybernetic hunter with a totally exaggerated English accent and a glass eye (obviously).

That said, the humour does occasionally fall flat, with overused and outdated internet humour (‘U mad bro?’) deployed to extreme levels. This is a subjective thing, some will love it, and others, like us, will feel it’s a little cringe worthy.

As for your character, you can chose one from four classes; the Gunzerker – a stocky, gun-toting soldier capable of dual-wielding any weapons; the Assassin – a stealthy sniper, who can distract enemies with decoys and inflict massive damage on a single target; the Siren – a support class, capable of controlling enemies and healing team-mates; and the Commando – a skilled soldier with a personal, mobile turret. 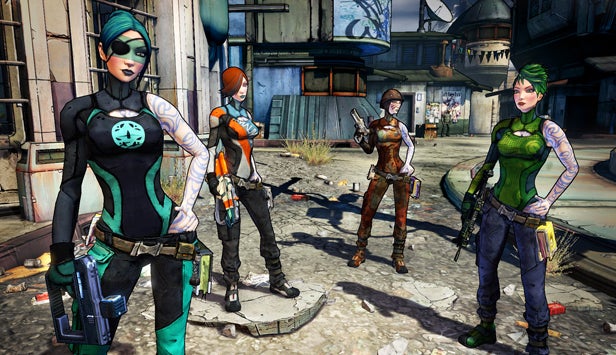 Thankfully these characters can be customised, so now your character will have a fairly unique look. In Borderlands, you would often find yourself in a game with four identical Soldiers barrelling around. Now you can easily identify your team-mates by their unique customisations and the identity tag above their head.

You’ll still find enemies such as the Skags and Spiderants roaming around the levels of Borderlands 2, as well as the usual Bandits and Psychos. But they’ve been joined by a large host of other enemies all intent on your destruction, including a wide range of heavily-armed robots, rock-tossing Bullymongs and lethal plant-life. All in all – plenty of stuff to fill with bullets, or grenades, or whatever the hell that gun of yours fires.

Borderlands 2 Weapons
With Borderlands 2 following a similar cycle to the original Borderlands offering, your survival still involves guns. A lot of guns. There were 17 million separate weapon combinations in the first game, and though there are no similar details yet for Borderlands 2 (Gearbox is claiming the number ’87 bazillion’ but we’re talking that with a pinch of salt), we’d be surprised if the number wasn’t similarly enormous. The game uses a system that randomises your weapon drops, so you have to find the right gun for you, rather than being able to customise it yourself.

Weapons come from a variety of makers and roughly suit different play styles. Jakobs weapons for example have a distinct Wild West feel to them, and will fire as fast as you can pull the trigger. By contrast, guns made by the Dahl Corporation are more often built for use at longer ranges, with semi-automatic firing and scopes.

Weapons can also come with elemental bonuses, including incendiary, frost and corrosive damage. These bonuses have particular usages – corrosive weapons are particularly effective against robots and armoured enemies for instance – but using an incendiary weapon against a fiery enemy is almost useless. 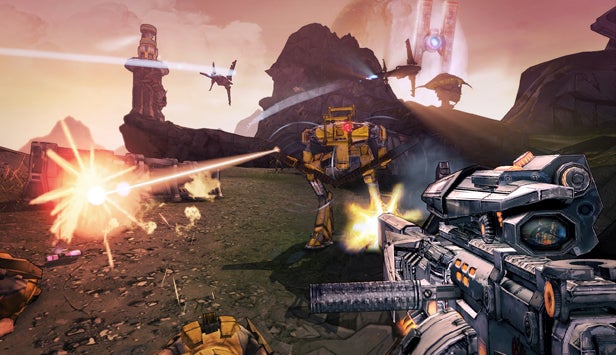 Borderlands 2 Graphics
The characteristic cell-shaded look of the original game makes a return for Borderlands 2, but the whole game looks infinitely better thanks to a much wider colour palette and a real variety of environments.

Initially you’re dropped into an arctic wasteland, where you’d be forgiven for thinking that the environments are as dull as the first game. But passing through this early portion of the game opens up the world of Pandora to you, and you’ll find it a whole lot more interesting to look at than it was three years ago, including lush, green highlands and sprawling urban areas. Unlike the original, the Pandora of Borderlands 2 now feels like a real world that you can explore.

We tested the Borderlands 2 Xbox 360 version, which ran very smoothly indeed, and displayed no frame rate issues or screen tearing. Given the intensity of the on-screen action, this is quite an achievement, and one that makes the fast-paced gun battles all the more fun. 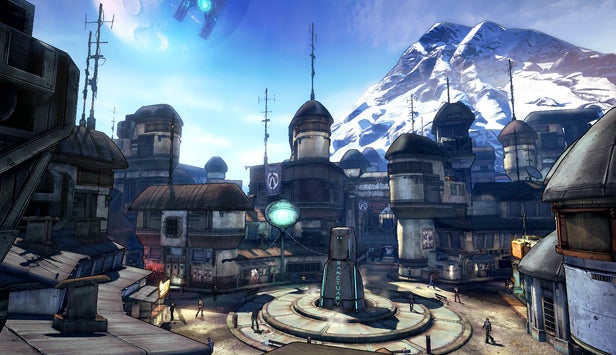 Borderlands 2 Gameplay
Though Borderlands 2 is a first-person shooter by nature, the game is based around traditional RPG elements. You complete quests and kill enemies to earn loot and experience, which lets you level up, grow stronger and unlock new abilities.

In terms of items and abilities, it doesn’t feel like you can create an omnipotent character anymore. You will get stronger and more powerful as you gain experience, but choosing items often involves a real trade-off. For example, really powerful shields often decrease your total health, so if you come up against enemies armed with shock weapons (which are very powerful against shields), you’re automatically in a tough spot. The most powerful weapons often have severe downsides, allowing them to tear through your ammo reserves, or resulting in incredibly slow reload times.

There’s a visible, conscious effort to make Borderlands 2 more balanced than its predecessor, and those that played the original will notice small improvements across the board. The inventory is much easier to deal with, items can be easily moved around and compared, and now you can mark trash or favourite items. This sounds simple, but it means you can sell all your trash at once whenever you reach a vendor machine, which is incredibly useful. It would also have been useful if you could mark items as trash as soon as you picked them up, but sadly this has been omitted. 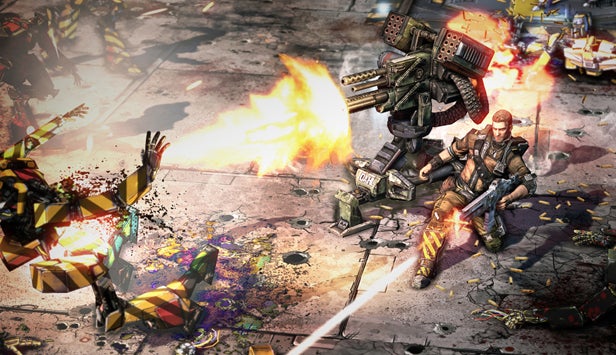 Also a tad on the annoying side is a tendency for enemies to glitch into objects. Often enemies will take cover, but appear to be standing in or behind items, meaning even direct hits will result in no damage at all. Similarly, money sometimes glitches into the ground, meaning you physically have to press buttons to pick it up, rather than automatically doing so. Neither of these are game-breaking issues, but it’s the sort of thing we’d like to see Gearbox and 2K Games patch sooner rather than later.

The quests themselves are pretty rudimentary in nature, and almost always tend to involve finding or fetching something, or killing someone. There could be a little more variety in quests and objectives, but the quest system is just a story-telling framework in Borderlands 2 – an excuse to get you to go somewhere and shoot things. And that’s what the Borderlands franchise is, and was always about. 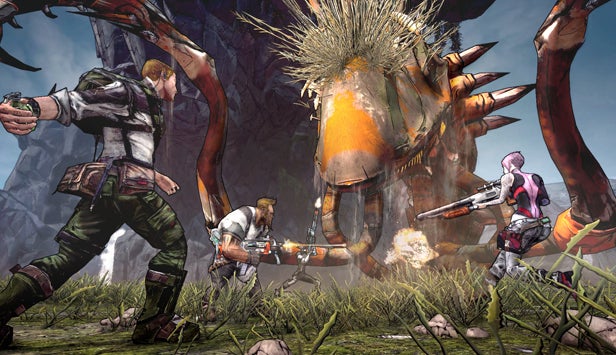 Borderlands 2 Multiplayer
Borderlands 2 multiplayer gameplay is much the same as the single player, but the difficulty ramps up heavily when you get more friends involved in co-op. The difficulty level adapts to the level of your characters so if you’ve got four fairly well levelled friends in a game, be prepared for some serious battles.

Also, be aware if you’re playing with random online gamers that there is no loot system other than the ‘pick up everything before everyone else does’ method.

Outside of the four-player online co-op, there is two-player split screen co-op (though not available on PC), but the enemy level will adjust to the highest character level, so if there’s a big gap between you and your friend, be prepared to die. A lot. 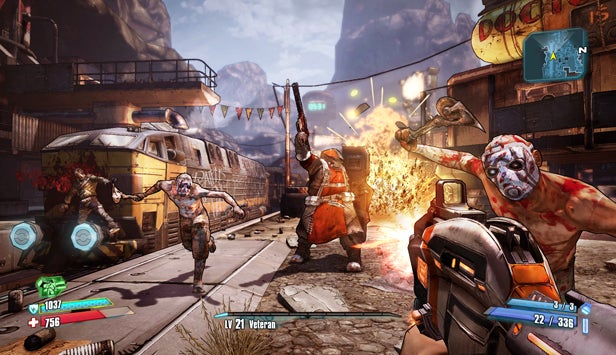 Borderlands 2 Verdict
All in all, Borderlands 2 is fantastic fun. Sure, it’s still a bit rough around the edges. There are small things like the glitched enemies, loot and inventory systems that feel like a definite improvement over its predecessor… but you wonder if maybe Gearbox could have done a little more. Overall though, it stands up well in a FPS market where good shooters are a dime a dozen.

The irony of this is that, outside of the usual first-person shooter mechanics, there’s not really anything out there like Borderlands 2. No other shooter has the same mix of frantic, fast-firing action and deep, loot-based role-playing game elements, and there’s definitely nothing out there as mind-blowingly crazy. Essentially, everything good about the original Borderlands has been retained, and anything not so good has been improved in some respect. Anyone saving up for Call of Duty: Black Ops 2 and Halo 4 should be eyeing this one up; it’s a great game in its own right and well worth the sub £40 price tag.