The £850 W1300 is a mid-range model from BenQ’s new, surprisingly well-populated home entertainment projector range. Its headline features include a strong-looking combination of a 10,000:1 contrast ratio and 2,200 ANSI Lumens of brightness, a six-segment single-chip DLP imaging system, and 3D playback. It’s the kind of projector that anyone who wants a large screen game and movie experience at a reasonable price will be looking at, but how does it measure up against more expensive projector’s or similar price TVs?

The W1300 is very easy on the eye with its trapezoidal shape  – especially as the inverted pyramid effect is applied to a much larger body here than it is on BenQ’s recently tested W750. The glossy white finish of the top plate doesn’t do the looks any harm either, and the contrast between this plate and the silvery front, rear and side trim works well.

The lens mounted to the projector’s left side impresses too courtesy of its sheer size, raising hopes of some quality optics and plenty of light output. The W1300 is promisingly heavily built too, and its connections are perfectly adequate for a projector available online for under £850. Highlights include two v1.4 HDMIs, a component video input, a D-Sub PC port, an RS-232 port for system integration, a composite video port, and an audio loopthrough in recognition of the fact that the W1300 – in keeping with most ‘convenience’-oriented budget projectors these days – sports built-in speakers.

These speakers are only rated to deliver a total 10W of audio power, mind you, so don’t expect a soundstage to rival in scale the W1300’s king-sized images. Also, of course, don’t expect the W1300’s audio to sound like it’s attached to its pictures, given that projectors inevitably sit some distance from the screens they’re projecting onto.

In other words, while the W1300 probably does need to carry speakers, we strongly urge you to use a separate sound system where you can. Especially as experience with other BenQ projectors recently has us hoping that the W1300 might prove capable of a quite ‘serious’ home cinema performance despite its affordability. 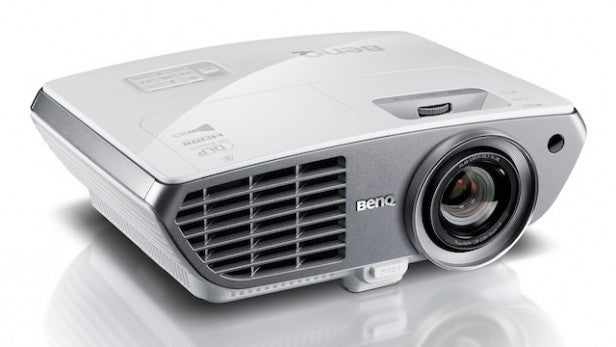 Providing sustenance for these early hopes are a strong-sounding 10,000:1 claimed contrast ratio and 2,200 ANSI Lumens of maximum brightness – figures that suggest right away that the W1300 has been developed and ‘tuned’ with home cinema/entertainment uses in mind ahead of the business or education markets.

Underlining the apparent film-friendly credentials are the way the W1300’s single-chip DLP projection system has been colour-tuned to the video-based Rec 709 standard, and the projector’s endorsement by the independent Imaging Science Foundation (ISF) as a projector with enough picture calibration tools and abilities to support a professional installation.

These tools include colour temperature fine tuning, with red, blue and green gain and offset tweaks, various gamma presets (including 2.2 and 2.4), and further hue, gain and saturation balancing for the red, green, blue, yellow cyan and magenta colour components.

A Clarity Control feature turns out to be basically a noise reduction system. Aggravatingly, this was set to on by default even when choosing the Cinema picture preset when we’d recommend turning it off when watching HD. If you really have to pipe standard definition into the W1300, though, the Clarity Control is worth experimenting with, especially since BenQ provides an unusually long list of setting options for it.

The 3D system in the W1300 is, of course, an active one. Less expected, though, is BenQ’s decision to include a free pair of active shutter 3D glasses with the projector – a result on an £850 product. Assuming the 3D images are actually any cop, that is.

Other features of note are DLP’s Brilliant Colour system (which ramps up colour saturations, but can also increase picture noise with lower-quality sources); BenQ’s consistently effective Smart Eco lamp mode which continually adjusts the projector’s light output in response to the level of brightness contained in the image to boost contrast; and digital keystone correction.

Not that, thankfully, you will likely need to use this latter, image-distorting feature. Unlike the vast majority of sub-£1000 projectors, the W1300 carries optical vertical image shifting so you can move the picture up and down to get it in the right place on your screen, rather than having to distort the image with image scaling to counter the image shape issues caused by angled projection.

Wrapping up this section with a quick look at the W1300’s optical system, it uses a Texas Instruments DarkChip 3 chipset in conjunction with a 6X (RGBRGB) colour wheel – both promising specs for the W1300’s price point.

Also promising is the W1300’s so-called ‘triple flash’ 144Hz 3D playback system. We’ve seen this before, and every time we have we’ve been struck by how well it deals with active shutter 3D’s common crosstalk ghosting flaw.

The W1300 is brilliantly easy to setup thanks to the vertical image shift and BenQ’s thoughtful provision of a 1.5x optical zoom.

Having so much zoom makes the W1300 able to accommodate a wider variety of room sizes and shapes than most cheap projectors, while the image shift as noted previously pretty much negates the need to use dreaded keystone correction. Result.

The remote control you get with the W1300 is one of the better ones we’ve received with a budget projector, thanks to its comfortably large size and backlit buttons.

There are direct remote control buttons for all the inputs too, which is always appreciated, as well as further direct button access to the three provided User picture memory slots and the projector’s colour, brightness, sharpness, contrast, colour temperature and tint adjustments.

In terms of set up advice, the projector is actually quite tolerant of your own set up ‘experiments’, though we would suggest that you turn off Clarity Control for HD viewing, set the lamp mode to Smart Eco for most of your viewing, and also consider turning off the Brilliant Colour system when you’re watching noisy/grainy sources, as the system tends to emphasise the noise.