The BenQ W750 is a single-chip DLP projector designed for home entertainment that only costs £440 but isn’t rubbish. In other words, it’s a miracle.

For such a cheap device the BenQ W750 is a very cute projector. Its top and bottom edges are adorned in a tasteful gloss white, which contrasts handsomely with the dark grey matt finish of the front and sides. The top edge has a gentle arc, too, and the side ‘wings’ angle in sharply from top to bottom, wrapping up a quirky and distinctive appearance that looks very appealing on your coffee table.

The only issue with the design is that two grilles at the projector’s front left corner let out quite a bit of light and heat, which isn’t ideal if you’re sitting right next to it.

The BenQ W750’s connections don’t seem to have suffered seriously as a result of its exceptional cheapness. The highlights are two HDMIs, D-Sub PC input, and an RS-232 port for integrating the projector into a control system.

There’s also an audio input, there because – as with most budget projectors these days – the BenQ W750 carries an integrated 10W audio system. We urge you to ignore this audio option if you can, given that projectors by their nature aren’t positioned anywhere near the pictures their audio is supposed to accompany.

However, we also acknowledge that for many of the relatively casual users likely to be thinking of spending just £440 on a projector it just won’t always be easy to run the projector in conjunction with a separate audio system. And to be fair, 10W is quite a promising output level by projection standards, so hopefully the sound it produces won’t follow the usual projection theme of sounding as hi-fi as two tins and a piece of string. More on that later.

The BenQ W750 is built around a single-chip DLP projection engine, and claims a 13,000:1 contrast ratio – which is promisingly high for a level of the market where brightness output generally appears to be the only thing manufacturers care about.

Brightness IS still high; 2500 ANSI Lumens is quoted, which does raise some concerns about its potential black level performance. Remarkably for its price the BenQ W750 not only supports 3D, but it supports ‘triple flash’ 144Hz 3D, where the frame rate is upped to limit crosstalk ghosting noise. We first saw this on a Sim2 projector costing many thousands of pounds, but so fast does technology move these days that here it now is on a projector costing less than £500.

Please note if 3D interests you that no 3D glasses are included free with the projector; they’re optional extras costing around £75 each.

If you’re wondering where the compromises surely associated with the incredibly cheap £440 price are hiding, we’re going to get into those now. First, the W750 isn’t a full HD model – it’s 720p. It’s also pretty limited when it comes to setup features, as we’ll find in the next section, and its claimed running noise levels of 30 or 34dB depending on the lamp mode you’re using are slightly troubling. Certainly they’re a reminder that budget projectors struggle to deal efficiently with the heat produced by their lamps. Especially when those lamps are powerful enough to splurge out 2500 lumens of brightness.

The BenQ W750 is pretty much par for the budget projector course where set up is concerned. This is not great news, as it means you have to work with a very limited amount of optical zoom, and don’t get any vertical image shift.

The former issue means you’ll pretty much have to physically move the projector forwards and backwards in your room to get the image size you want, while the latter problem limits image geometry correction to the projector’s keystone correction system, which essentially digitally distorts the image. 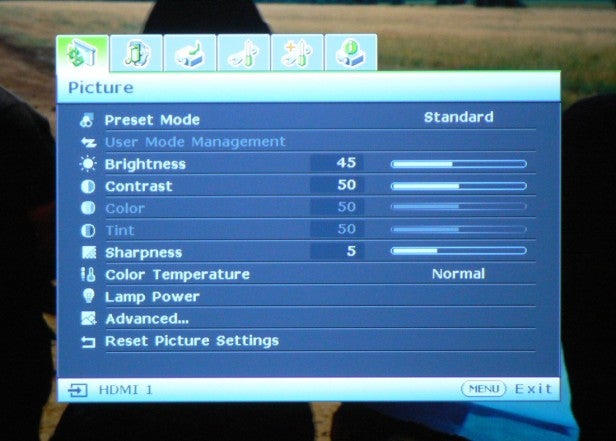 We guess this is marginally less important a problem on a 720p projector than it would be on a 1080p one, given that the BenQ W750 already has to downscale the 1080-line sources that make up most of the UK’s HD sources. But keystone is still something we prefer to avoid where possible.

At least the limited zoom and focus tools on offer are easy to use thanks to a simple two-ring arrangement around the lens accessed through a slot on the projector’s top, while angling the projector up from a coffee table involves nothing more fiddly than a drop-down leg at the bottom of the front panel.