As we settled down to watch the W1300, our main worry based on experience with some of BenQ’s previous projectors was that it might try a bit too hard, going too aggressive with its colours, pushing too far with its sharpness, and trying to stretch its contrast range too much. And actually, it did all of these things!

To be fair you can understand why. For initially the impressive punchiness, vibrancy and detail on show in the W1300’s 1080p images grabs your attention hard, and delivers images so dynamic you can watch them even if with a little ambient light in your room.

This latter fact will potentially endear the W1300 to casual users not generally accustomed to completely blacking out their rooms for serious movie viewing sessions. Plus the W1300’s default picture preferences provide a handsome showcase for what various elements of this budget projector’s picture can do.

If you’re watching in a pretty dark environment, though, and you share with us the view that a really great video picture tends to be subtle rather than in your face, it doesn’t take long before your eyes see past the surface appeal and spot a few issues – namely a slightly cartoonish look to rich colours, some fizzing noise in certain sections of the colour palette (especially blues and greys), and a slightly hollow feeling to the darkest areas of the picture.

Fortunately, the first two of these three issues can be treated simply by deactivating the Brilliant Colour feature (so long as you don’t mind the resulting reduction in colour dynamism) and toning down the image’s sharpness from the rather high presets BenQ favours.

You can also elicit a little more subtlety from the W1300’s colours via the colour management system if you’re brave/interested enough to try, to the point where the W1300’s colours can be considered outstanding for its price point, with credible and well-balanced tones. Skin tones, in particular, are an order of magnitude more natural than those of the recently tested and insanely cheap BenQ W750. 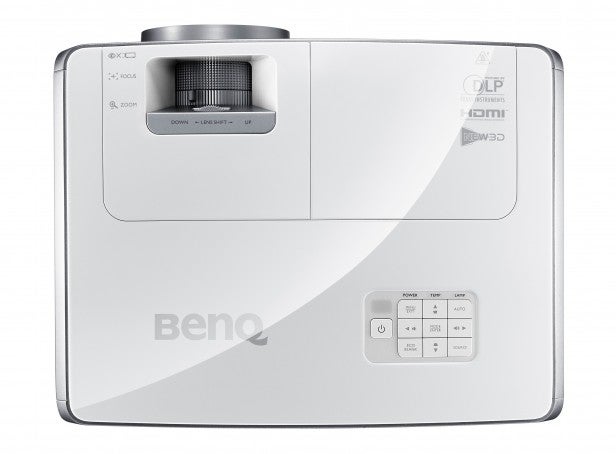 With the noise reined in and colours made more expressive, it’s also easier to appreciate the W1300’s strong sharpness performance. The only area where the projector could do with a bit more detail is in dark parts of the picture, for despite our best efforts – including switching the lamp from Smart Eco to its lowest-light Eco setting – we never completely stopped dark scenes looking a bit greyed over and short of shadow detail.

Getting back to the good news, though, the W1300 suffers relatively little with single-chip DLP’s rainbow effect, only exhibiting minor signs of the red, green and blue striping problem over the very brightest (pretty much white) parts of the image. This is an important plus point for the W1300 given the rainbow effect’s potential for serious distraction.

Motion also looks good on the W1300 in 2D mode, with pleasingly little evidence of judder even when watching 24p Blu-rays, and hardly any sign of the fizzing noise over moving skin tones that can be a significant problem with lesser single-chip DLP projectors.