Editor’s Note – As a significant portion of the Battlezone experience is online play, we’re refraining from a full review until the PlayStation VR launches.

Battlezone stood out among the PlayStation VR launch lineup as potentially one of the coolest of the bunch. It’s a Tron-style tank shooter, where I and up to three pals can join up and shoot at anything in red in procedurally generated maps. What’s not to love? Unfortunately, the experience didn’t entirely live up to expectation, but that doesn’t mean there isn’t any fun to be had.

Battlezone is a reimagination of the 1980 title of the same name, now looking all shiny and new for PSVR. However, it begins with a loving nod to days gone by – the opening menu asking me to Insert Combat Operative Identification Nexus (C.O.I.N). This made me feel all warm and fuzzy.

Players can take part in an online or offline campaign on a map full of hexagonal tiles – each a randomly generated mission – and must survive to the end mission: a volcano. You can choose from one of three tanks to begin (light, medium, heavy), but more unlock and become available as you progress. The same applies to weapons, you’ll get more the longer you play. 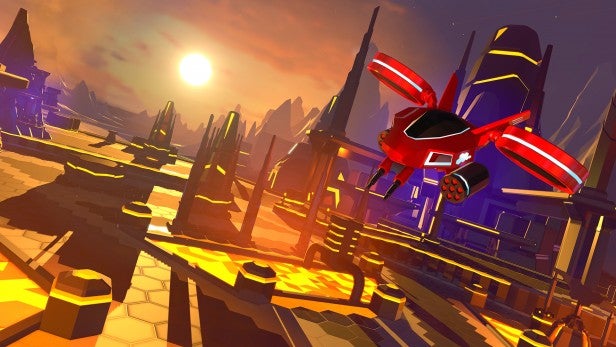 There are a number of systems in play too, from currency earned by bashing enemies to spend on upgrades, new lives and other bits, plus turbo boosts that affect your tank’s shield, and so much more. It’s a very complex game once you sink into it. What causes frustration is that every mechanic feels like it’s out to “get” you.

Let’s start with the tanks. While moving around on the battlefield you can press L2 to boost. However, this causes all of your shields to deplete, leaving you hugely vulnerable to enemy fire; it doesn’t take many hits to die, even in a heavy tank. This seems like a simple compromise, but since all of the tanks appear to move at a snail’s pace without boosting, it can sometimes feel like you have no choice but to boost to get from point-to-point. 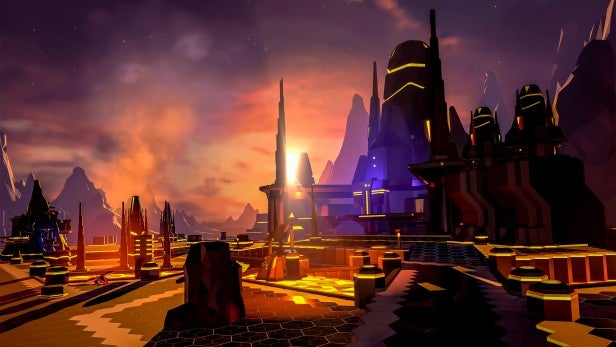 What further makes this an issue is the way new waves of enemies spawn. While completing certain objectives, such as taking down a shield generator, new waves of enemies will pop up right on top of your position each time you take down a part of the generator. It feels incredibly cheap to have several hard-hitting tanks drop right next to me only seconds after the entire level was completely vacant, giving me no time to recover or try to survive.

The way to alleviate this frustration is by improving your shield integrity, which is achieved by spending credits earned by by killing enemies and completing objectives on mods. You can spend these on upgrading the front, rear, left and right shields, healing (when playing in multiplayer), a magnet to pick up credits at a distance, and an active reload. The problem is that everything quickly becomes very expensive. Each time you buy a mod, the price goes up, requiring you to judge carefully where to allocate funds. It got to a point in the game where I had spent a lot of money on my right-sided shield, so if I started to take some damage to any other flank, I simply turned to show the barraging enemy my “strong” side. 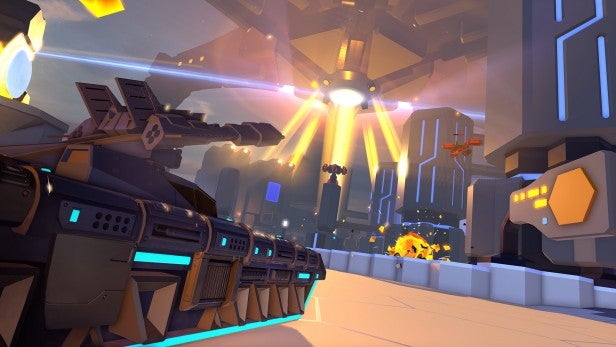 In addition, credits are required to buy lives, which, if playing in multiplayer, are shared among your entire team. They must also be spent on new weapons whenever you reach a supply point – if one should show up, that is. The trouble with the campaign and level layouts being randomly generated is that it consistently becomes luck of the draw whether or not you have a decent campaign.

Sometimes I could go an entire campaign without reaching a supply point. At other times I could find plenty of shops to stock up on new weapons, but all of them were the equivalent of pea shooters. It’s simply a case of playing the ball as it lies, which is equally both exciting and annoying.

Going into the campaign solo, the experience often proved frustrating. Combat is slow, and once thing start becoming tough, there’s a very good chance your adventure will quickly come to an end. There’s no hand-holding in Battlezone, and while in some games this level of challenge may be enticing, I simply felt defeated here.

However, on having the opportunity to play some multiplayer, I finally began enjoying the game. Communicating with two squadmates, moving around the map as a unit, and taking out enemies in unison was a much greater thrill. Communication is key, informing your allies of your position and whether you need help is vital to your survival.

One of my fellow players was a developer of Battlezone, and he enlightened me to some of the nuances of the game that I doubt I’d ever have discovered simply playing the game myself, such is its lack of conveyance at times. Listening to the developer talk about some of the little nods and touches that have been implemented – how using the standard (and weakest) blaster gun will always cause defeated enemies to drop ammo for my main weapons, for example  – gave me a much greater appreciation for the game. It’s just such a shame that these aren’t more apparent; I wish I felt able to discover these playing myself. It feels like these mechanics are a little too buried. 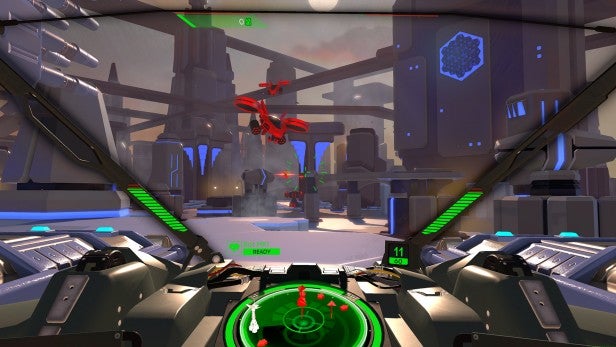 Battlezone feels like it’s a good game, but it should have been great. Right now, standard traversal around maps feels a little too slow, especially when it randomly generates objectives or enemies miles from the start point. You’re also punished for trying to get to the action quicker with boosts syphoning your shields, which basically makes you a sitting duck.

However, playing multiplayer was a far more enjoyable experience – like this is how Battlezone was designed to be played. It will be interesting to see if the experience improves once the game has launched proper and people start jumping onto online servers.

Right now, I feel a little disappointed – but I hope this early impression doesn’t last.