PlayStation VR Worlds seems like the perfect first PSVR game – a collection of five games in one cheap package to give you a taste of the potential of the headset. Each offering feels like a completely different experience, ranging from the entirely passive to an action-packed shooter.

The trouble is that each mini-game feels all too brief, and as much as you may enjoy them, none reach their full potential, meaning the whole package ends up feeling like a demo box that could’ve been included with the PlayStation VR itself.

Think of Danny Dyer in Time Crisis and you have The London Heist. Except it’s excellent. If you have two Move Controllers this is by far the shining star of the whole package. The worst part about it is that the experience is far too short, and in truth I think a dedicated London Heist game would have been preferable to VR Worlds’ mixed bag. 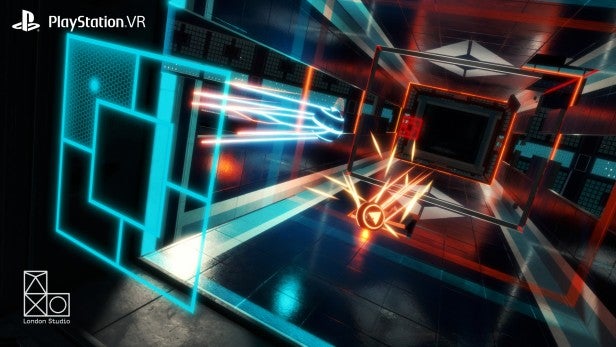 The shooting here is spot-on, and is a real example of how far virtual reality can take gaming experiences to the next level. I’m ducking behind cover, popping out to shoot enemies, closing one eye to improve my (shocking) aim. In a chase scene I’m firing an Uzi out of a van’s window, opening the car door to shoot at gangsters on motorbikes who are tailing us. It’s exhilarating, a real action-movie highlights package. With two Move Controllers in your hands, these moments are the best of the entire game.

The real shame is that there are only two dedicated shooting levels, with the rest focused on cutscenes. The whole of London Heist can be finished in around 30 minutes, with only 10 of those spent actually shooting stuff.

There’s a separate shooting range mode, where you can try to improve your score each time, but it lacks the adrenaline-fuelled action of the campaign’s levels.

While the experience is brief, it shows how amazing a Time Crisis-style arcade shooter can be in VR.

This space-mech shooter is another brief experience, but a solid one. As it’s story-driven, it sorely lacks replay value, though.

The surprising thing about the game is how comfortable it is. With movement of your rig controlled by the left stick, turning by the right and aiming your weapons by looking around, I expected to feel motion sick like I have with VR flight sims. But thanks to the steady speed at which the mech turns, London Studio has done an excellent job of not overwhelming the senses. 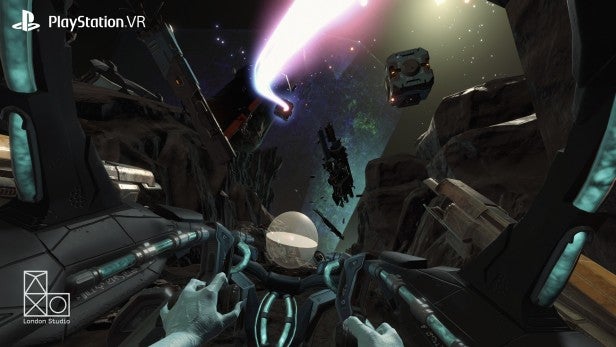 The experience is fun, if incredibly basic. Walking around decrepit spacecrafts, killing small alien creatures, moving debris and jumping from point to point is enjoyable while the experience lasts, but once again the game’s few chapters can be completed in under 30 minutes.

There’s a story here too, albeit a very basic one. You play a member of an alien race looking for a mysterious artefact, guided by your rig’s AI. You soon become overwhelmed by some spiritual voice guiding you along the way, trying to help you rediscover your past. The bizarre thing is that the game ends on a cliffhanger, which makes little sense considering it’s quite clear there won’t be a sequel.

With the core mechanics as simplistic as they are, and the combat never really gripping, this is another experience sorely lacking in replay value.

This futuristic version of 3D Pong was the surprise of the bunch. You move your paddle by looking around and can put spin on the ball by flicking your head as the ball hits, or strike the ball harder by moving your head forward at the point of impact.

The strength of Danger Ball lies in its diverse opponents. I’ve come up against paddles that can duplicate the ball, one that can split in two and another that’s four times the size of the others.

Tournament mode can be fiendishly challenging, too. First-to-five-points matches become incredibly tense as the score edges closer to the win, and the more I played, the better I became at reacting to the trajectory of the ball. 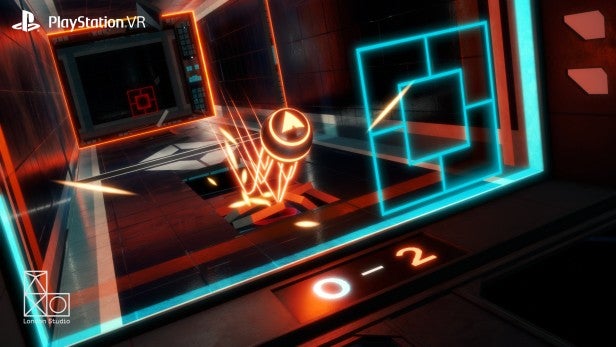 This is the one game in the pack with strong replay value, especially for people as unhealthily competitive as I am.

This is an entirely passive experience, but a very enjoyable and at once terrifying one. Lowering your virtual self slowly in a metal cage to enjoy all the sights and sounds of the deepest parts of the ocean, this game looks absolutely stunning. I still don’t know how Sony has managed to make games look this good in VR. The underbellies of manta rays show texture, scars and a level of detail I never expected. Jellyfish glisten and light up the deep, dark waters.

The incredibly intense encounter with a shark is something genuinely terrifying. I won’t spoil what takes place here, but it has real heart-in-mouth moments, and can feel overwhelmingly claustrophobic.

The worst of the bunch, VR Luge lacks any excitement or intensity despite dropping you downhill at upwards of 100mph.

I even physically laid down to fully commit to the mode – like a pillock I twisted and turned on my bed to try and feel like a pro. The problem is that there’s a disconnect between how you have to turn with the headset and how the in-game avatar turns. 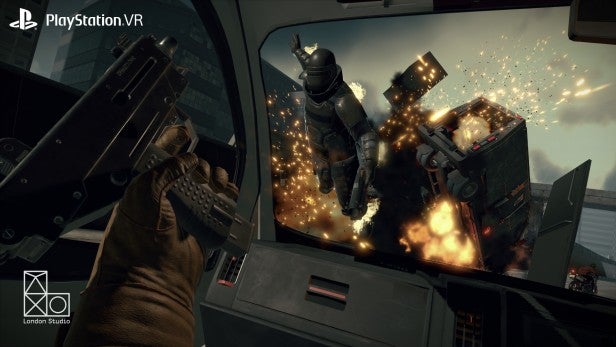 In real life I’m turning by moving my shoulders, leaning into the corner, but obviously this does nothing, I only need to tilt the headset in order to turn. It’s reminiscent of the moment you realise to become a pro in Wii Tennis you need only flick your wrist, rather than yell like Sharapova and uncoil that torso twist.

It feels like PlayStation VR Worlds has two very good games buried within it that have been stripped back to demos. Rather than being amazing, indulgent main courses, they’re bite-sized chunks thrown into a pick-and-mix.

Each experience is fun, yet far too fleeting and lacking in replay value. The low price point means it’s still a good accompaniment to your PSVR headset, but it does feel like this is something that should’ve been included in the box.

I feel like Studio London would’ve put forward a much stronger footing with a dedicated The London Heist game, as it’s the star of the show. Cockney Time Crisis would’ve been an experience to remember, but trimmed back and buried in this package, it’s too brief to be memorable.