Battle Chasers: Nightwar’s biggest problem is its name. Not doing the game underneath justice at all, you’d be completely justified in seeing the title and having absolutely no idea what to expect. If you’re into old-school JRPGs, however, you absolutely owe it to yourself to check this out.

Already out on the Xbox One and PS4, the real appeal with the Nintendo Switch version, as ever, is that you’ve got a very solid game you can take with you wherever you go. Based on the comic book series ‘Battle Chasers’ by Joe Madureira who also served on the development team, this is a throwback to the likes of classic 90s Final Fantasy titles when Japanese role-playing games were taking over the world.

The first thing you’ll notice when you jump into proceedings is how good it looks. Aping the comic style wonderfully, Battle Chasers sets the bar high from the off and keeps it up until the end credits roll. Clearly inspired by steampunk, every single environment has been painstakingly created with a clear sense of what developer Airship Syndicate has set out to achieve. If you need to be won over before you’ve even pushed a button, you absolutely will.

In terms of its core, though, it’s important to remember what genre Nightwar is based on. While it does do a lot to modernise JRPGs from yesteryear, grinding is still very much at the forefront of the experience. You have to be beyond patient when progressing because it’s not a quick and easy ride, especially as the difficulty increases every time you do indeed level-up. In short, then, the more powerful you get, the less effective you may feel. The challenge never stops. 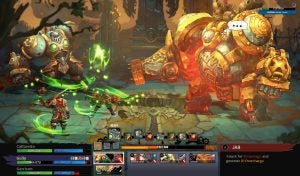 This goes for your selection of characters as well. While there are plenty to choose from to make up a party of three, they can only be levelled-up individually which adds to the aforementioned grind. The worst thing you can do is allow some individuals in your team to sit above others as any balance will fall through the floor. Bring them into the mix at the wrong point and you’re already dead because of how weak they are.

As you can imagine, this relates to spending a lot of your time in combat — thankfully, it’s an absolute highlight. While it’s instantly recognisable in the sense it’s a traditional turn-based system, the sheer depth here almost transforms it into something brand new. Aside from the amount of different attacks or tactics you can choose from, there’s items, perks, and combo manoeuvres that can be joined together should you start to understand how it all links together. It’s not endless, of course, but if you have a big enough imagination you can concoct the most obscene strategies that look the part too. It’s not inventive enough to win over someone who finds turn-based fighting boring, but it absolutely drags that mechanic into the modern day. 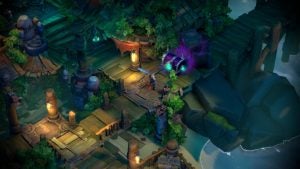 That’s not to say it’s simple, mind. Airship has layered this with ideas to try and stop people getting bored, but that does mean you have to use your brain, especially when it comes to Overdrive and Burst. The former is imperative to keeping your mana levels topped up alongside activating special abilities some characters have, whereas the latter is essentially responsible for Nightwar’s version of Final Fantasy’s Summons. They’re vital for turning the tide in any scrap you may be struggling with.

It’s only fair to point out this can be frustrating, though. Teamwork is very much the recipe for success, so if you let it slip you’ll die. And then you’ll die again. And again! Trying to be a lone warrior will only result in failure — you have to be prepared to think things through or there’s a good chance you won’t get anywhere. Unsurprisingly, that isn’t very fun.

Outside of this the setup is what you’d expect. There’s a ton of dungeons to explore — which also shift in terms of layout once you’ve completed it to try and tempt you back in — and, naturally, a bunch of mini-games such as fishing and monster hunts. In short, if Battle Chasers wins you over, you certainly won’t be wanting for content. This is packed from head to toe. 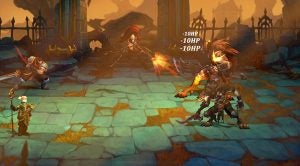 There’s also a decent enough story in place to tie everything together, and the cast of people you’ll meet are entertaining enough, if not a little stereotyped. The focus certainly seems to be on the battle system, with everything else serving as a solid background that ticks the boxes. That’s important to note should you be hoping for Final Fantasy 7 levels of narrative but that’s not the aim. It’s the gameplay which takes centre stage and in that sense, it’s very good.

Throw in a very smart and well-put-together tutorial that makes learning all of Battle Chaser’s systems far more comfortable than it would be otherwise, and this is a very decent JRPG that will satisfy people desperate for such throwbacks. Having it on the Switch — meaning you can indeed take it with you — is the usual icing on the cake. Boring commutes are most definitely a thing of the past.

Battle Chasers: Nightwars is a damn good update to JRPGS of old, carrying the genre into 2018 without sacrificing what made it so appealing to begin with. The fact it’s now portable on the Switch just makes it better still.