The Beosound Stage is a rip-snorting sound system, capable of prodigious bass and an expansive soundfield. There are some concerns over usability, plus a dedicated remote would have been nice, as would a slightly more involving UI. Nevertheless, we can forgive the Stage its taciturn demeanour, given how much of a fun listen it is

The Danish brand may have taken its own sweet time getting up to speed, but this debut offering – a Dolby Atmos enabled one-piece – arrives looking every bit as iconic as its Beosound stablemates.

The frame is gently curved, with drivers cloaked behind acoustically transparent Kvadrat cloth. There’s a 2mm gap between the frame and the cover itself, which gives the impression it’s floating. The grille can be pulled off, if you fancy a change in style. It also affords a good look at the drivers behind.

The Smoked Oak version reviewed here looks spectacular, but commands a price premium at £1900; note that it’s available in Bang & Olufsen stores exclusively. If the style (or price) isn’t to your taste then there’s also a more overtly techy version with aluminium trim, plus a Bronze Tone edition – both of which sell for £1250. This puts the Stage in line with high-end soundbars from Samsung and LG, and is notably cheaper than the Sennheiser Ambeo.

Both those natural and bronze frames are made from a single piece of forged aluminium, but our Smoked Oak unit features artful crafted dovetail joints, a gorgeous bit of detail that recalls Scandinavian cabinetry – which probably accounts for much of that price tag.

The surround may be wood, but that doesn’t preclude the inclusion of touch-sensitive controls for source, volume, power and Bluetooth 4.2 connection. 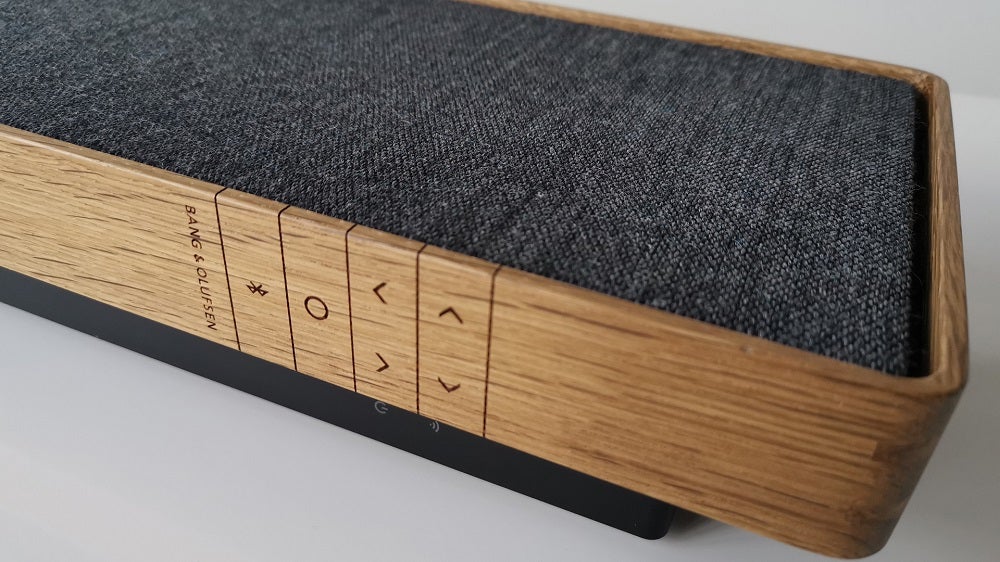 Connections are recessed behind a pop-off cover on the rear. Here, you’ll find an HDMI 2.0 input (just one, which seems a little mean), plus HDMI output with eARC, and Ethernet to connect the Stage to your wired network and smart TV.

That solitary HDMI input supports 4K HDR and Dolby Vision. There’s also a 3.5mm line input, possibly for a local source – or maybe an Echo Dot. There’s no USB power supply, which is a shame.

Either end of the bar are wall or stand connectors. Wide at 110cm, it’s suitable for flatscreen models of 55 inches and larger. It’s worth noting that the Stage tips the scales at 8kg, which is quite hefty.

Streaming support includes Apple AirPlay 2, with Chromecast built-in. Bang & Olufsen system devotees will also be pleased to learn that the soundbar is compatible with BeoLink Multiroom. 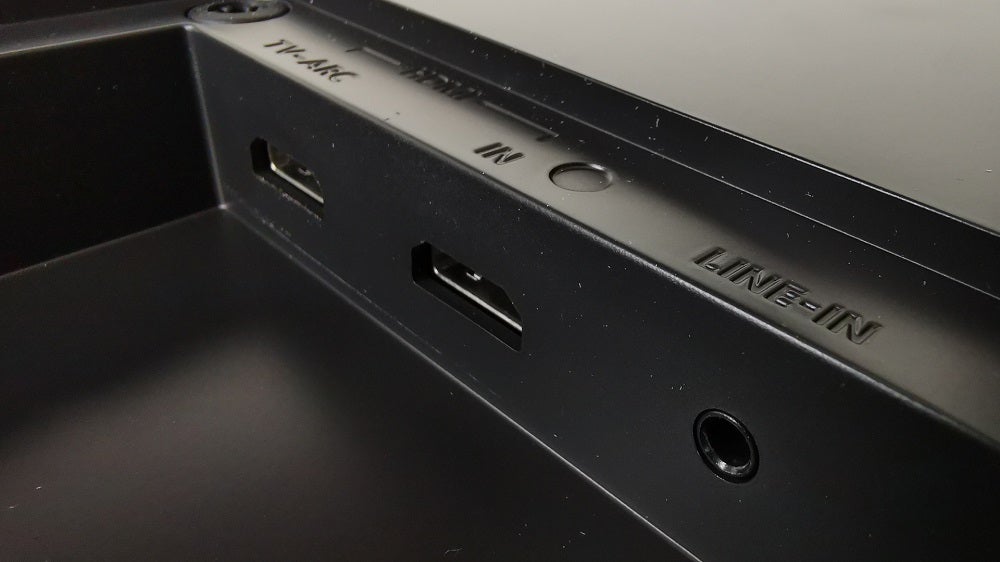 There’s no remote control provided. However, you can co-op your TV remote to adjust volume via ARC; alternatively, you can use the Bang & Olufsen app. This also allows you to assign orientation, be it shelf or wall-mounted.

The Stage will work in two orientations, standing upright or flat on its back – although it isn’t smart enough to automatically sense which way it’s sitting. We reckon it offers optimum performance standing upright.

If you partner the Stage with an LG C9 series TV, you can also integrate control via the Beoremote One. That particular screen is also used by B&O for its Harmony and Eclipse TV offerings, hence the co-operation.

The simplicity of the overall design undersells the armoury beneath. The Stage employs 11 individual speaker drivers, each with their own 50W amplifier module. There are four bass bins, paired in a stereo configuration, plus two 38mm mid-range drivers and a 19mm dome tweeter centred. Additionally, a 38mm mid-range and 19mm tweeter are angled upwards at 45 degrees, left and right.

Bang & Olufsen describes the Stage as a 3.0 system, but that rather undersells its talents. Directionality is aided by height virtualisation DSP technology.

The combo does an outstanding job of creating height and width with Dolby Atmos content. Those angled edge drivers work beautifully, sending highs and mid-range cascading hither and thither.

The Stage may look meditative, but it boasts a visceral presentation. The classic opener from Mad Max: Fury Road explodes like a sonic jack-in-the-box.

The spin and guttural roar of Max Rockatansky’s V8, as it exits the hill in a cloud of red dust only to be followed by pursuers, is thrillingly cinematic. There’s a surprisingly seductive sense of surround, which, if not reaching behind your head, certainly whispers around your shoulders.

There’s also a fleeting sense of overhead travel as the motorcycles fly into frame, before the bar re-centres when the convoy flies into view. 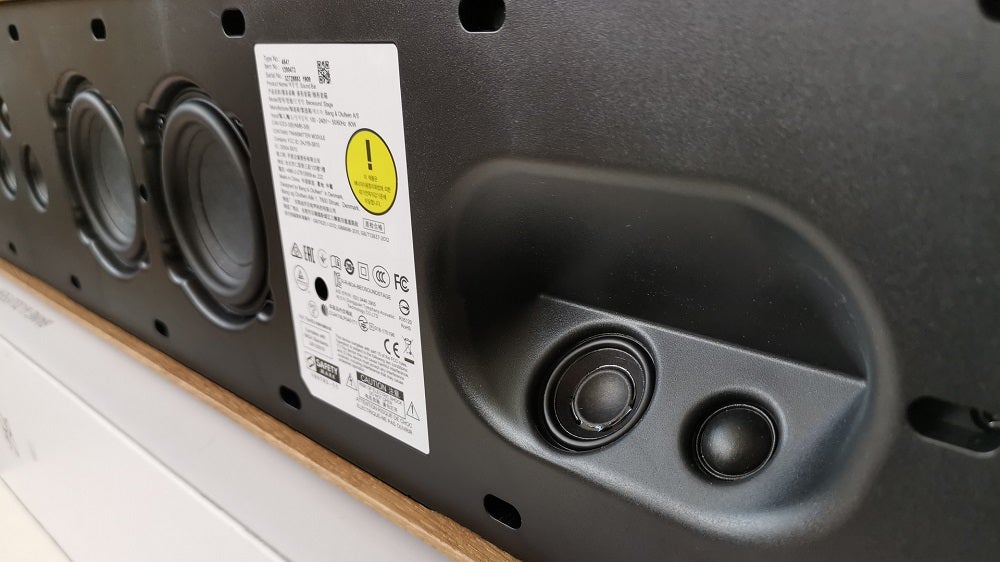 There’s no separate subwoofer supplied with the Stage, but it doesn’t require one. We measured appreciable low-level rumble at 31.5Hz. Sure, there’s a slight artificial DSP tonality to this deep bass, but it doesn’t manifest during movies, where the LFE will be just a component in a more complex mix.

In addition to Dolby Atmos delivered in a TrueHD container, there’s also support for Dolby Digital Plus, as favoured by pay and streaming TV services. It also works with DTS codecs.

The Stage plays loud and clear, and is gloriously dynamic. The Live Aid set from Bohemian Rhapsody allows the system to really strut its stuff. There’s clear separation between the band and the crowd. Brian May’s characteristic riffing doesn’t impinge on John Deacon’s bass. 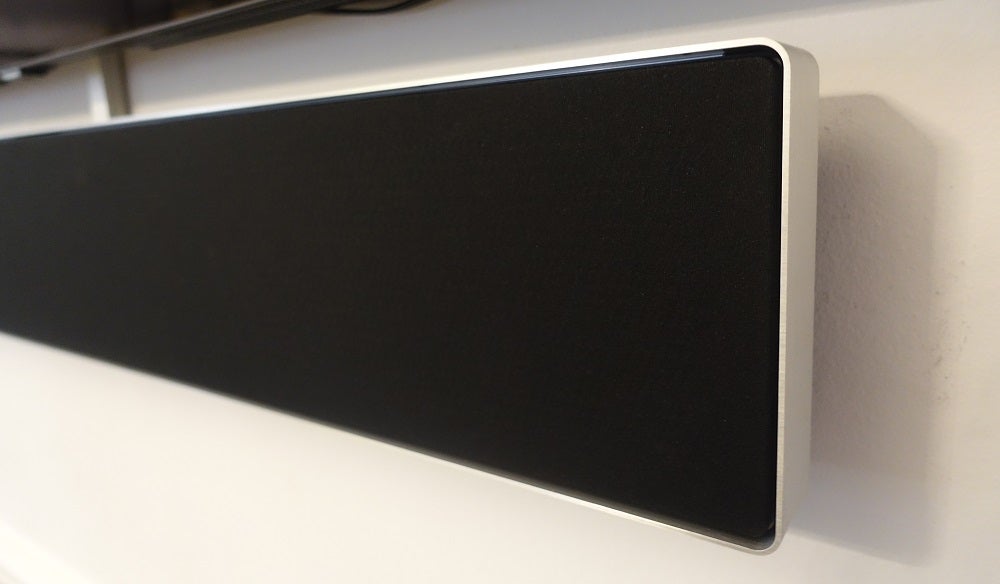 The Stage also makes a superior Bluetooth music speaker. The title track from Green Day’s Father of All… confirms that the bar has the verve and power to rock like traditional stereo bookshelf monitors. Any concerns that you might be sacrificing stereo jollity by using the all-in-one as your main music system prove unfounded; it manages a decent level of separation.

The Stage can be used as part of a larger multi-room ecosystem, using either Apple AirPlay 2 or Google. There’s no provision to partner physical surround speakers, or indeed, a subwoofer.

You should buy the Bang & Olufsen Beosound Stage if…

If you’re seeking an upmarket sound system that fuses superior performance and classic design then you’re in luck: the Stage nails both.

This is a rip-snorting sound system, capable of prodigious bass and an expansive soundfield. And it isn’t exorbitantly priced when you consider what you’re getting for that money.

The minimalist Scandi design is sublime, exuding a quiet class – yet powered up, it’s anything but.

You should buy the Bang & Olufsen Beosound Stage if…

We have some concerns over usability, however. A dedicated zapper for everyday use would have been welcome, as would a slightly more involving UI. Nevertheless, we can forgive the Stage its taciturn demeanour, given just how much of a fun listen it is.