Add proprietary Sennheiser Ambeo audio processing to Dolby Atmos and you get what is arguably the best-sounding soundbar on the planet. Superb cinematic audio from a single-box solution – and it’s wonderfully musical too.

Finally emerging from development hell, the Sennheiser Ambeo Soundbar is the audio specialist’s first foray into home cinema. Rather than release just another sound slab, Sennheiser has rethought the entire immersive audio proposition, adding its own titular processing to the mix.

Sennheiser describes this debut as a 5.1.4 listening experience, with no need for additional rear speakers or a separate subwoofer. Soundbars have long promised a more convenient home theatre experience, yet few actually deliver. The Ambeo Soundbar is one of the few.

Ambeo, in case you haven’t been paying attention, is a multifaceted proprietary immersive audio codec. It can be used for native audio recordings, or applied – as is the case here – atop Dolby Atmos and DTS:X. It’s compatible with Atmos delivered via Dolby Digital Plus (as used by streaming and broadcast) and TrueHD (as on Blu-ray disc).

It also does rather marvellous things with vanilla stereo…

At more than a metre across, and weighing a substantial 18.5kg, this Ambeo is hardly an amoeba. It’s clearly designed to service screens of 65in and larger. It may not win any beauty pageants, but build quality is outstanding.

In total, there are 13 speakers on board, including six 4in long-throw woofers and five tweeters, driven by 250W of amplification. 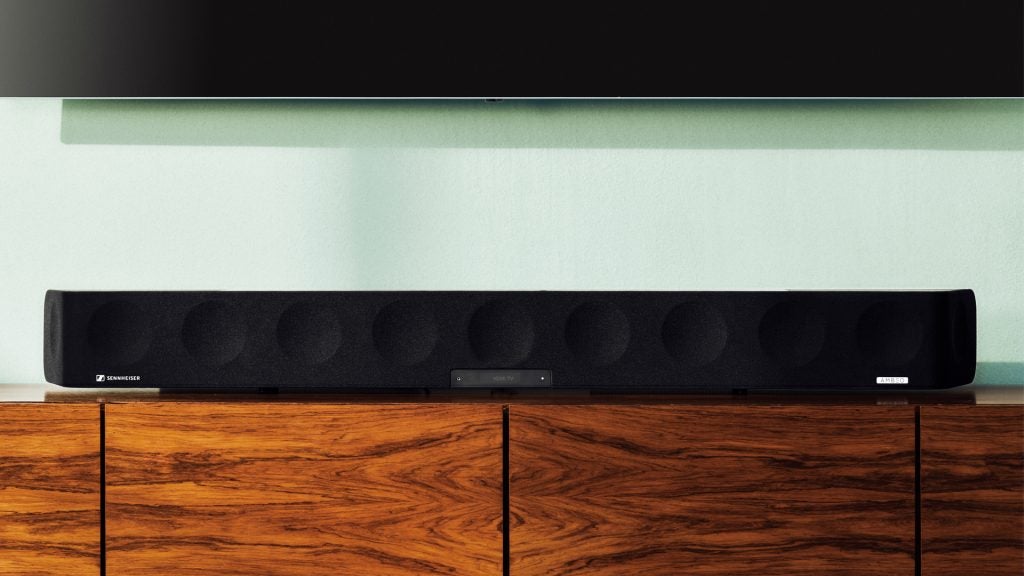 Above the front-facing speaker array, two Dolby Atmos enabled drivers look skyward, while side-firing cones aim at a nearby walls to bounce their sound. The bar itself sits on two rather diminutive ledge feet, although there is the option to wall mount.

Inputs include three HDMI (v2.0a), one HDMI out (capable of eARC, with Dolby Vision HDR support), digital optical audio and aux-in. Both Google Chromecast and Bluetooth (4.2) are integrated. The soundbar is also compatible with Chromecast and the Google Home app. 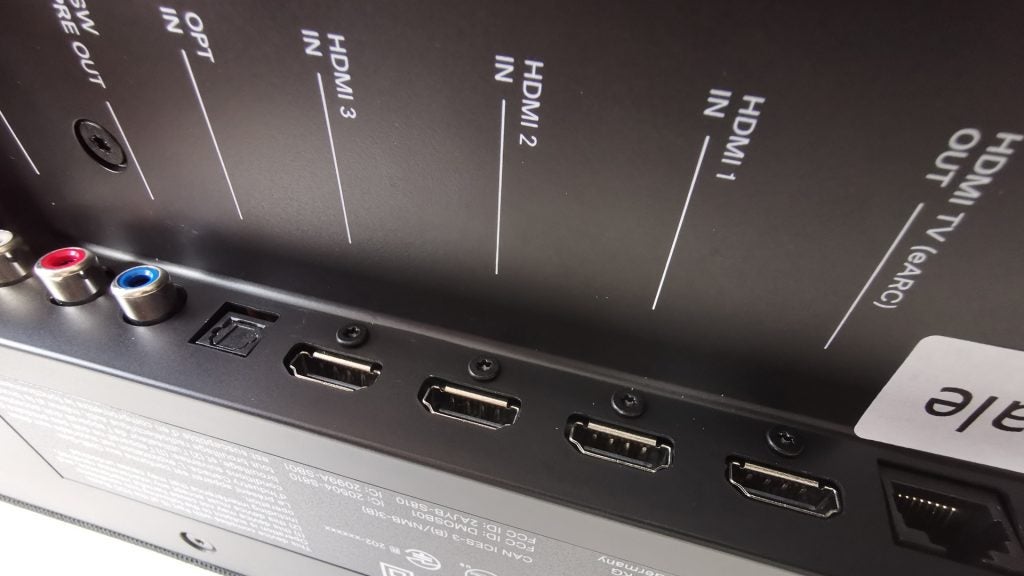 A rather small remote control offers access to a variety of audio presets (movie, music, news, sports, neutral and night), as well as source selection and volume control. Sennheiser also suggests downloading the partnering Smart Control app, which adds an equaliser. In truth, this app isn’t particularly polished and it’s difficult to believe people will use it with any great relish.

If you need them, there’s also a selection of on-body controls.

This soundbar doesn’t just work with Dolby Atmos and DTS: X, it’s also compatible with MPEG-H – a rival immersive audio codec apparently gaining traction in the Asian market. As such, all format bases are covered… so long as you don’t count Auro 3D. 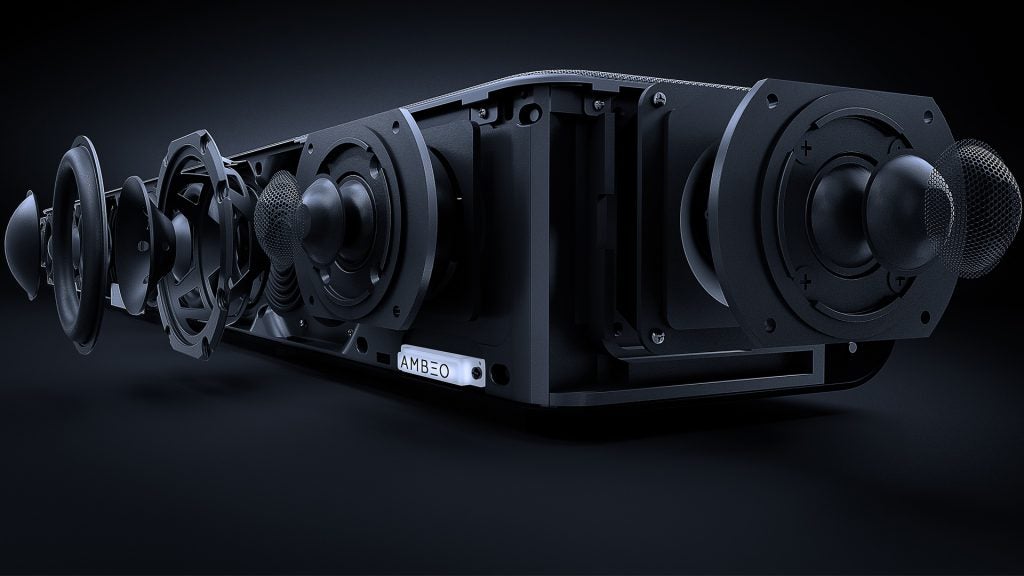 The bar ships with a high-quality calibration microphone. This plugs into a 3.5 mm audio jack on the front fascia and takes no time at all to run through its routine. There’s no on-screen display; instead, the bar communicates via a small status window and a selection of chimes and beeps.

Interestingly, the calibration mic only measures a single listening point. So make sure you measure from your preferred recliner.

With a Blu-ray player connected and a stack of Dolby Atmos and DTS:X discs at the ready, this Sennheiser doesn’t waste any time impressing.

Standard Atmos test clips confirm that the Ambeo Soundbar has no problem aping an immersive speaker layout. Insects circle the listening position, birds flutter around and tropical rain thunders down from above. 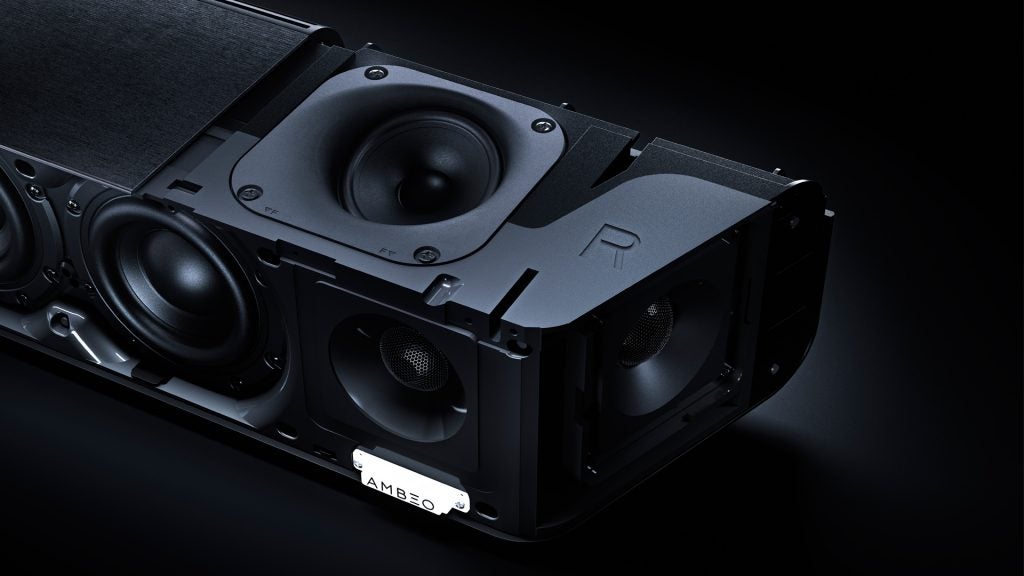 The influence of Ambeo processing is dramatic; switched off, the soundstage loses height and width. Ambeo processing comes in Light, Standard and Boost strengths. With Light there’s very little sense of post-processing at work, while Boost overtly broadens the soundstage but suffers from a subjective lack of focus. The effect is a bit Marmite. For the bulk of this audition, we stuck with the Standard implementation, which gives an enhanced sense of ambience.

It may be an all-in-one, but there’s substantial bass underpinning the soundstage. LFE hits hard and fast. If you’re not convinced by the slam, there’s the option to hardwire a subwoofer, with a preset crossover of 80Hz. We didn’t feel the need to add an additional deep bass woofer. The Ambeo bar can drop to 30Hz.

There’s no shortage of muscle. The sound system positively sings when you crank up the volume; its output is prodigious. Mid-range delivery is faultless, and vocals and movie dialogue are handled with smooth skill.

What’s really striking is the sheer complexity of the soundfield. There’s depth and nuance, musicality and raw power. It may be a single physical box, but it doesn’t sound like one. The thumping futuristic audio of Blade Runner 2049 (UHD Blu-ray) is oppressive yet mesmerising.

The good news is that the sound bar doesn’t only favour Dolby Atmos; it’s equally impressive with DTS: X. Kingsman: The Secret Service is a real sonic adrenalin rush, with all the same sonic attributes. Whatever the source, this is a genuinely cinematic sound system.

Of course, Ambeo isn’t just for movies. With a standard multi-channel 5.1 mix, there’s a real sense of enhanced space. And the job Ambeo does with two-channel sources is little short of miraculous. It works equally well with both stereo TV shows and music.

You should buy the Sennheiser Ambeo Soundbar if…

If you simply don’t have the room, or the inclination, to install a full-blown home cinema system then this is the most convincing alternative we’ve heard to date.

It doesn’t try to mimic a conventional home theatre system, but delivers something rather fresher. Sennheiser has taken the concept of a Dolby Atmos soundbar and elevated it to another level. Theatrical audio has evolved.

The Ambeo soundbar isn’t just for films, it’s a dab hand with stereo TV shows and music, adding to its versaility.

You shouldn’t buy the Sennheiser Ambeo Soundbar if…

There’s no question that this is an expensive audio solution, but given that it’s challenging the performance of a high-end AVR and speaker package, it isn’t ruinously overpriced