However revolutionary and convenient they might be, iPods and their kin don’t do much to further the cause of awesome hi-fi sound quality.


Sure, audio compression systems have come a long way in recent years, and you can adjust the amount of compression your iPod applies to your favourite tunes depending on how much memory space you’re willing to let a song occupy. But for the most part, iPod music is never going to rival a good SACD, DVD-Audio, or even high quality CD for sheer, eargasmic sound quality.


Not that this has prevented them selling like the most molten of hotcakes, though, as countless people have become accustomed to sacrificing sound quality for convenience. Which is a bit of a bummer if you happen to be a manufacturer of high-end hi-fi gear. 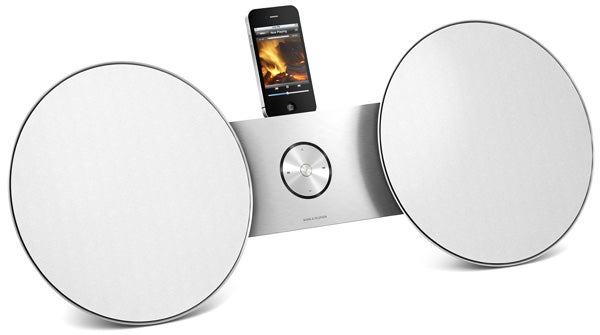 For the likes of Linn, B&O, B&W and Meridian, the way the iPod (and downloaded music) has gradually reduced accepted standards of sound quality must have created a commercial headache quite separate from the one induced by all that compressed music insulting their finely tuned ears.


Eventually, of course, many of the big hi-fi brands have had to conclude that if you can’t beat them, you really need to join them. Meridian’s had its £1,500 F80 and i80 iPod dock system for a while now, B&W’s got its Zeppelin iPod speaker dock systems… jeez, even marvellously bonkers valve-based outfit Fatman has its brilliantly named iTube Fatdock systems. 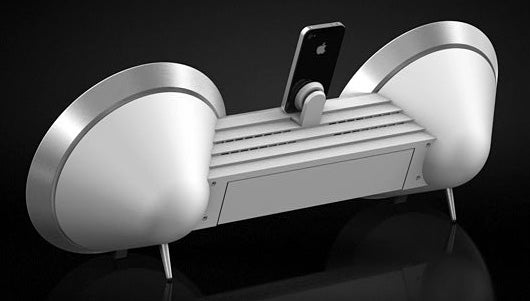 It was inevitable, then, that eventually even Bang and Olufsen would have to learn to stop worrying and love the iPod, despite the premium brand’s inevitably circumspect approach to new forms of AV technology. What we hadn’t expected, though, is just how far B&O would go to make its first dedicated iPod product truly memorable.


Once you’ve clapped eyes on the BeoSound 8, it’s not a sight you’ll forget in a hurry. Its design (from the ever-imaginative David Lewis) is a true original, even by B&O’s usually ‘out there’ standards.


Particularly eye-catching – and promising – are its frankly huge speakers. As well as hitting you in the face with their 10in width, they’re also unusually deep round the back by speaker-dock standards, to give their sound room to breathe. The speakers’ design also funnels back to create a cone-like shape that both hides the speaker rears from view when you’re looking straight at the system, and avoids internal parallel surfaces so that the sound won’t be distorted by standing waves. 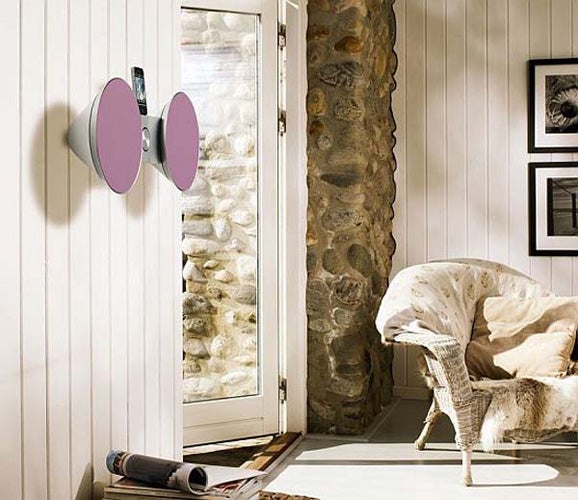 Given, though, that the iPod docking section of the BeoSound 8 is essentially just a slender but sumptuously solid aluminium bar sitting between and just behind the front of the two speakers, the speakers’ depth would seem to represent a pretty major balancing problem for the BeoSound 8. But B&O has ingeniously turned this problem to its advantage by tucking little feet on the rear end of the speakers so that you simply rest the whole system back onto them. This has the added advantage of tilting the BeoSound 8’s front up, further adding to its aesthetic appeal and potentially helping it deliver a more room-filling sound.


If you prefer, you can also mount the unit on the wall – provided you can accommodate the amount it sticks out!

Obviously, the key question with the BeoSound 8 has to be if any iPod dock can ever really be worth £895? But its aesthetics and remarkable build quality do much in themselves to start justifying such an outlay.


Even the actual dock point on the BeoSound 8 is a work of art. A lovely-looking circular white ‘prop’ looms beyond the aluminium crossbar, onto which you rest your iPod as you slide it onto the slightly raised docking slot. This is mighty cool already, but the little prop also has a very handy trick up its sleeve: namely that it doesn’t just support iPods. It can also comfortably hold iPhones and best of all, iPads. While Arcam’s rCube supports the iPad via a wireless connection, the BeoSound 8 is, to our knowledge, the first speaker dock able to handle an iPad slotted straight into it. In fact, not only can it support the iPad’s extra size and weight without any problems, but it even manages to still look drool-inducingly lovely while it’s doing it. 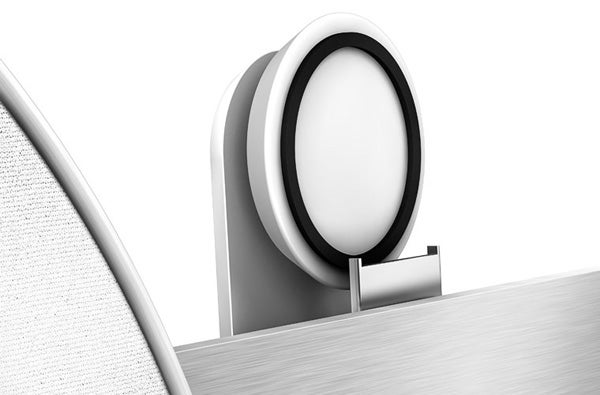 Yet more coolness – as you can see, it’s really got our tech geek adrenaline pumping – comes from the circular ‘rocker’ control panel hewn into the centre of the metal bar dock mount. As well as looking and feeling rather lovely, this minimal approach to control works a treat (so long as you have the unit mounted on a stable surface).


The circular shape raised hopes that it might support the classic ‘circular swipe’ control system pioneered by Apple’s portable music products, but even though this doesn’t prove to be the case we seldom found ourselves feeling frustrated by the controls available. 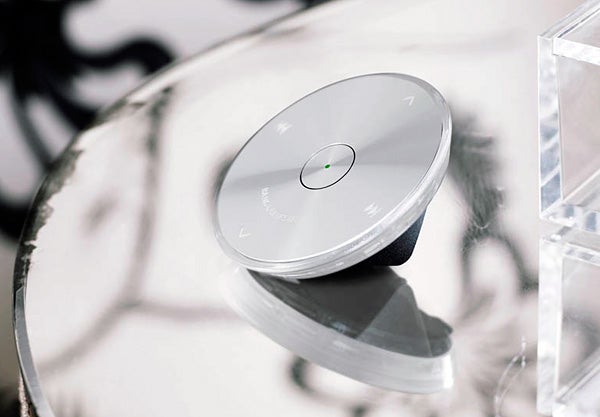 Naturally the BeoSound 8 also ships with a remote – and wouldn’t you just know it, this remote is a lovely little ‘cut out’ replication of the circular metal-fronted control panel on the main unit. We’re so sad about this sort of stuff that on a couple of occasions we actually found ourselves just fondling this ultra-cute remote even when we weren’t actually using the BeoSound 8. Tragic, we know, but there you go.


And still we’re not done with the BeoSound 8’s aesthetic extravagances. For you can also get the grilles over the speakers in any of six optional colours: Lavender Blue (dilly dilly), purple, green, yellow, black and white. The only colour we could bring ourselves to contemplate was the stylishly neutral white one, but if you’re of a, um, ‘funkier’ persuasion, then given how much real estate the speaker grilles occupy within the overall design, you really can adjust the look and mood’ of your BeoSound 8 quite radically. 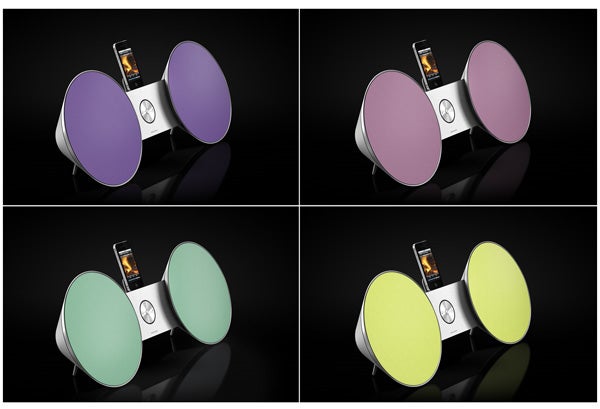 The BeoSound 8’s iPad compatibility isn’t its only feature claim to fame. For a start, it also carries a facility that lets it adapt its sound to different rooms. Even better, you can now download a free BeoSound app for your iPhone or iPad that lets it stream Internet radio channels into the BeoSound 8 when docked.


The list of radio stations available with the free app is limited, it must be said; an upcoming update will open the world of Net radio at large, but only if you pay for it. At least the channels B&O have selected for the free app do cover a pretty comprehensive set of musical tastes – though only two are UK-based.

The BeoSound 8 also carries a stereo phono auxiliary input in a hidden section on the rear of its metal bar, so you can attach other makes of MP3 player, as well as a USB input that can a) play music stored on USB drives or b) stream music from your PC.


The one part of the BeoSound 8 that we would have expected from the outset to be impressed by is its sound quality. We can’t think of any B&O product we’ve seen, including its flat TVs, that has had anything less than stellar audio – and the BeoSound 8 is no different. In fact, the impact it has on your humble compressed iPod/iPad/iPhone music is at times little short of miraculous. 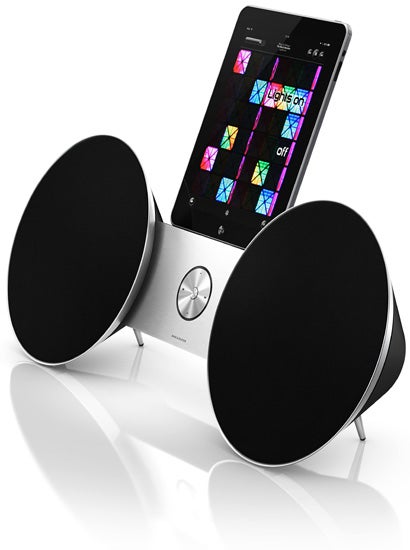 For instance, it almost completely removes that sense of a diminished dynamic range and overloaded mid-range usually associated with compressed music, combining deep, well-rounded bass with open and natural trebles and hiding 95 per cent of the sibilance and distortions that MP3 and, to a lesser extent, AAC files can suffer with when pushed hard by a track.


Take ”Hiding All Away”, on Nick Cave’s ”Abbatoir Blues” album. This track features a huge bass riff undercurrent, Cave’s trademark dominant and often aggressive vocals, a regularly repeated harsh electric guitar riff, loads of percussion, female backing vocals, and repeatedly ‘goes to 11’ in terms of the density of its mix. Yet the BeoSound 8 handled the entire track effortlessly from an iPhone, easily matching the mix’s epic scale and reproducing levels of detail we’d actually thought from hearing the track on lesser devices had been squeezed out by the compression process. 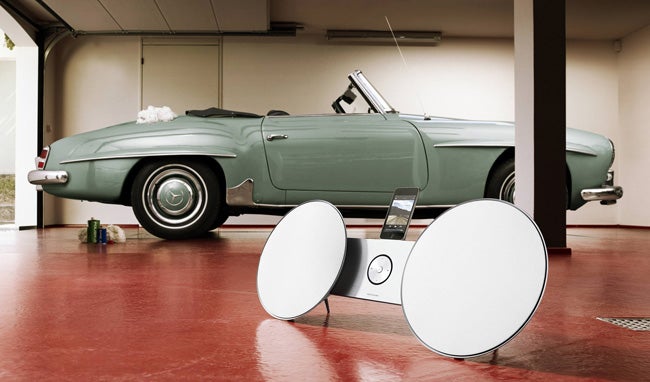 The BeoSound 8’s also more than in touch with its sensitive side, though, as it delivered a genuine hi-fi sensibility to Bach’s Baroque Brandenburg Concertos – despite these only being compressed with a fairly standard 192kbps setting.


The BeoSound 8’s ability to make compressed music sound like a good quality CD is matched by its efforts with Internet radio, which at the very least end up sounding like a perfectly tuned FM radio broadcast.


Really, the only negative we could find about its audio performance is that the sound becomes just a bit harsh if you really crank up the volume. But we’re talking about a volume level well beyond what most people would need for a normal domestic environment.


The BeoSound 8 is arguably the coolest and most ‘now’ product B&O has made for years. What’s more, when you consider the relative prices of other B&O kit and the rival speaker dock from Meridian (£1,500), it even feels like decent value – and we can’t remember if we’ve ever been able to say that about a B&O product before!


Ultimately, the relative affordability of the also very good B&W Zeppelins, Arcam rCube and the lack of fully integrated Wi-Fi are enough to make us squeeze the BeoSound 8’s overall mark down to an 8. But this shouldn’t disguise the fact that it’s a truly exceptional product that deserves to find a much wider audience than B&O’s usual devoted fanbase.