As ever when reviewing multi-band routers, it’s worth bearing in mind that we test only one band at a time in order to isolate performance for each. While the vision with these routers is that the multiple bands produce better throughput when many devices are connected and running simultaneously, it’s an impractical, hard to quantify and hard to repeat test.

However, I’ve found that in general the isolated performance of each band provides a good indication of how the router will perform overall. In addition, using the router installed in a house for a week, where I test for long-term stability and multi-device, multi-user situations, will provide a decent overall sense of the router’s capabilities.

To test each band, I set up a PC with the Asus PCE-AC68 AC1900 Wi-Fi adapter and positioned the router 1m away, 5m away with two brick walls in between, and finally around 10m away with the router down another floor. These tests simulate performance in the same room, a room next door and a room on the other side of the house and down a floor. 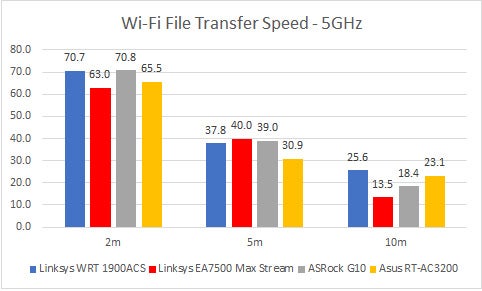 In these tests the Asus RT-AC3200 proved decent, if not outstanding. Using the first 5GHz band it certainly wasn’t the fastest I’ve ever tested, hitting 65MB/sec, but it performs within touching distance of the fastest 70MB/sec-plus routers.

At 5m, though, it managed only 31MB/sec, which again trails the 40MB/sec-plus of the best AC1900+ routers. At 10m it pulled out a surprising result, however, hitting 23MB/sec – the second fastest I’ve recorded.

Performance was far less consistent on the second 5GHz band, where often the speed would fluctuate wildly. However, when it did settle down it actually outperformed the first 5GHz band, hitting 73.3MB/sec, 32.4MB/sec and 29.3MB/sec. 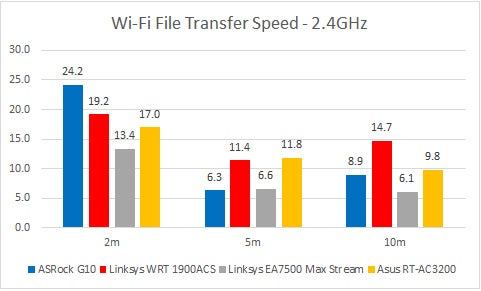 At 2.4GHz, the AC3200 was consistently impressive: 17MB/sec, 11.8MB/sec and 9.8MB/sec are all either the fastest or second-fastest rates I’ve recorded. All told, this is clearly a speedy router – there is a reason for all those aerials, after all – if not quite the absolute fastest across the board. 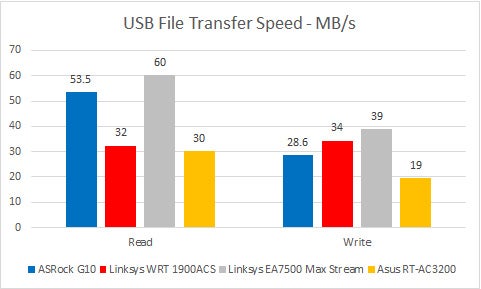 It’s something of a surprise, then, that USB transfer speeds were unimpressive. Speeds of 30.1MB/sec read and 19.4MB/sec write to my USB 3.0 hard drive are the second slowest I’ve tested when it comes to USB 3.0-equipped high-spec routers; the fastest I’ve measured hit 80MB/sec and 45MB/sec for read and write respectively. The AC3200 scores remain fast enough to stream HD video to a couple of devices simultaneously, but file transfers will feel a little sluggish. 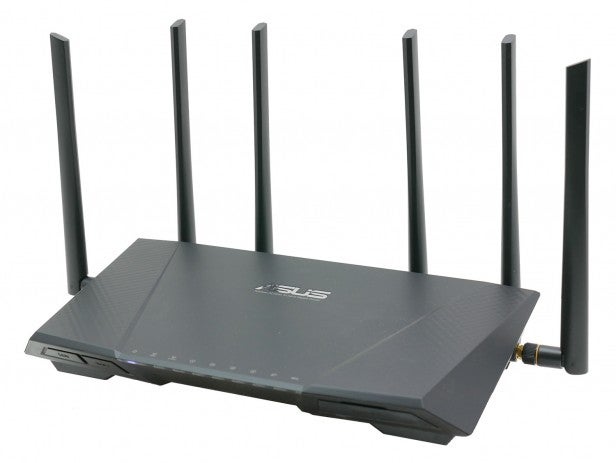 The RT-AC3200 is a very capable router, but it does have a couple of quirks. Setup isn’t quite as plug-and-play as the majority of routers and the inability to connect two printers at the same time is one area where it trails the competition. Add to this slow USB performance and slightly temperamental performance on the second 5GHz band and there’s enough to imply that many would be better off with any number of alternative AC1900+ routers.

However, the AC3200 is stable, delivers Wi-Fi performance that’s up there with the best routers, and has several extra software features that others lack – so it certainly isn’t a device to discount completely.

Overall, though, while at £200 it isn’t overpriced for a tri-band router – the D-Link DIR890L is around £260 – it still costs a fair bit more than dual-band routers that, in many instances, offer better performance. For £170, you can pick up the fantastic Linksys WRT1900ACS, which is the fastest and most robust router I’ve tested. Alternatively, the Linksys EA7500 Max Stream offers the latest MU-MIMO Wi-Fi and costs only £130.

The Asus RT-AC3200 is a very fast router with lots of extra features that might interest enthusiasts. However, it has a few quirks that take the edge off its appeal.