What is the Linksys EA7500 Max-Stream?

The Linksys EA7500 Max-Stream is one of only two routers by Linksys that features that latest development in Wi-Fi: MU-MIMO (Multi User, Multiple Input Multiple Output). This allows the router to simultaneously talk to up to 12 devices at the same time, rather than having to talk to each device in quick succession.
Although a standard part of the now fairly widely adopted Wi-Fi AC specification, MU-MIMO is only just starting to be incorporated into routers and is set to be the must-have feature for those buying a high-end router this year.
Aside from its MU-MIMO capabilities, this is a fairly typical modern router, with a couple of USB ports for sharing printers and USB storage devices, plus four gigabit Ethernet ports for connecting wired devices.
Video: Trusted Explains how to improve your Wi-Fi signal

This is not a router that shows off its high-end credentials. In comparison to the chunky, angular styling of the ASRock G10, Nighthawk X4 Netgear R7500 or Linksys’ own WRT1900AC the, EA7500 is a refreshingly modest. Built mostly from simple matt-black plastic and with a gently curved shape, it looks every bit the sort of device meant to shrink into the background never to be heard from again. When it comes to routers, for many people, that’s no bad thing. 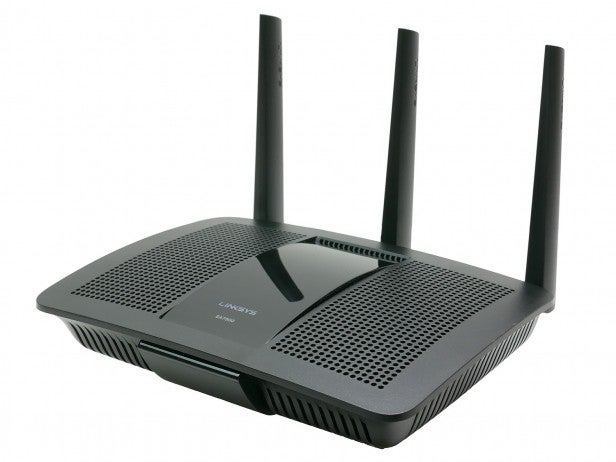 The only nod to the power that lies beneath is that it’s a relatively large device, with dimensions of 257 x 184 x 56 mm. Plus there are of course those three external aerials, which can be removed and directed in whichever way is best for reception and range. As well as sitting flat on a desk or shelf the EA7500 can be wall mounted so it should be easy to find a spot where it’s suitably out of sight.
One cost-cutting measure is the lack of any useful ports and buttons on the front of the router. The Linksys logo illuminates to show that the unit is switched on but there are no other lights to indicate the status of any of the router’s functions. This is particularly galling because many users on intermittent connections would surely appreciate at-a-glance diagnostics in the form of status lights. There’s also no front-facing USB socket or easily reachable WPS button for easily connecting new devices to the router.
Instead, all connectivity is kept around the back where you’ll find the four gigabit Ethernet LAN ports as well as a further Ethernet port for connecting to your modem. Alongside there are two USB ports, one of which is USB3.0-compatible, a WPS button, reset button and a power switch, which are nice to have in those “have you tried turning it off and on again?” moments.
It’s a touch disappointing to see only one USB 3.0 port, especially as the USB 2.0 port doesn’t double as an eSATA port like it does on the WRT1900ACS. While it’s hardly an essential for most households to have more than one shared drive, and a printer won’t need the speed of USB 3.0, it’s still nice to have. 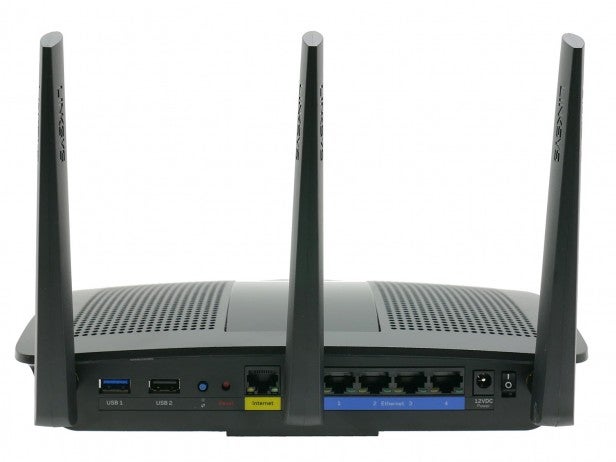 Related: Best routers to buy in 2016
Inside there’s a 1.4GHz dual-core processor, enabling the router to power its way to AC1900 Wi-Fi speeds via its three aerials. That 1900 figure is derived from the maximum 1300Mbps that can be delivered over the 5GHz band at the same time as the 600Mbps that can be delivered over 2.4GHz.
As ever you’ll need the right hardware to take full advantage of those potential speeds, and there are still relatively few devices around. However, while a year ago there were very few PC expansion cards that could connect at AC1900 now we’re starting to see AC1900 USB adapters and some laptops are starting to include it too. MU-MIMO, meanwhile, doesn’t require anything extra so should benefit all your devices, new or not.
MU-MIMO allows the router to send and receive from up to 12 devices simultaneously, which is a huge leap forward from the current prevailing standards that that only allow multiple devices to be connected to the router at once, but only exchanging information one-by-one. In these cases, the router simply cycles between the devices very quickly, firing off little bits of information each time, making it feel like it’s constantly connected.
MU-MIMO allows true simultaneous information exchange up until 12 devices are trying to communicate, at which point it reverts back to a turn-by-turn system. The main benefit, then, will be a more responsive feel and faster throughput when multiple devices are accessing it at the same time, though there shouldn’t necessarily be any improvement in maximum throughput to any one device.

The EA7500 is a breeze to set up. Connect everything up and go to http://LinksysSmartWiFi.com or 192.168.1.1 in your browser and the automated setup process will start.
So far, so typical, but I’m not keen on the way the EA7500 pushes you towards Linksys’ SmartWiFi service that requires you to enter an email address to create an account. While the service is no doubt useful for some, I’m never a fan of being pushed towards it when it’s perfectly possible to use the hardware without it. 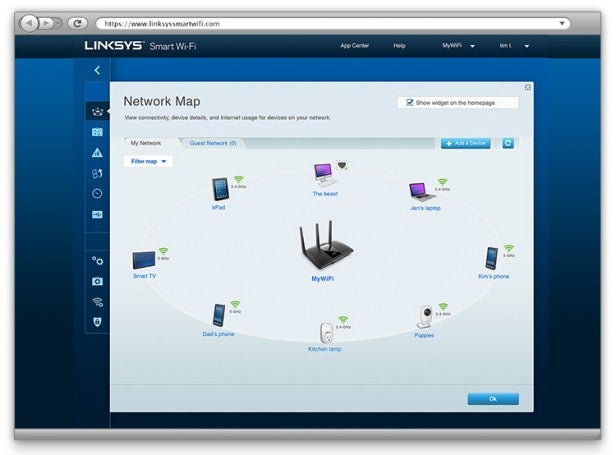 The service allows you to access you router from anywhere, whether you’re connected to your network or not, and means you can log into the router to change settings using an email and password, rather than having to remember the device’s specific username/password combination. This also ties into a SmartWiFi app that allows you to control some basic features, such as setting up a guest Wi-Fi network, from your phone.