What is the Asus ROG Maximus XI Extreme?

The Asus ROG Maximus XI Extreme is one of the more expensive motherboards around, with a price of £430 – and for that price you get a product absolutely packed with features.

While that’s a huge amount to pay for a motherboard, it isn’t the most expensive slab of PCB I’ve seen recently. The MSI MEG Z390 Godlike and Gigabyte Z390 Aorus Xtreme occupy the same sort of territory as the Asus, and they arrived at £530 and £500 respectively.

Shell out for this pricey Asus board and the one thing you can be sure of is a decent physical design. The rear I/O and the adjacent chokes and VRMs are covered with monolithic heatsinks in different shades of grey, and the southbridge has similar hardware.

A large portion of the rear is covered with even more metal. It has two roles: it helps with heat dissipation, and is home to a strip of RGB LEDs that stretches along the entire right-hand side of the board. 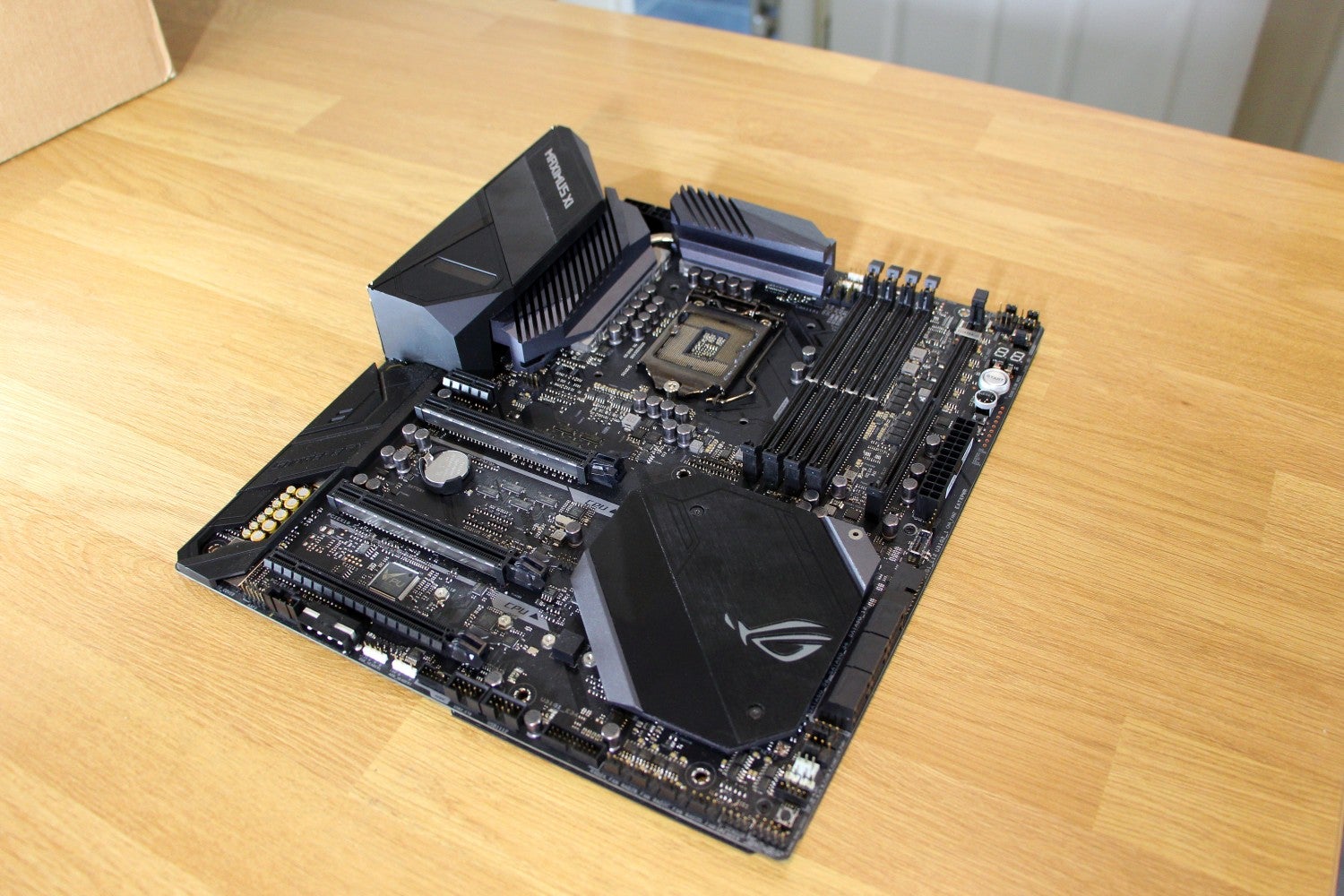 There are RGB LEDs in both of the main heatsinks, and the top heatsink also has a small, monochrome display that shows POST codes, frequencies, temperatures and information on water-cooling hardware and fan speeds. You can also use it to display your own images or GIFs.

The Asus does look good, but much of the heatsink design is borrowed from the Asus ROG Maximus XI Hero, which costs a little over £200.

In addition, the Asus’ more expensive rivals are better. The productivity focused MSI MEG Z390 Godlike has more RGB LEDs in its heatsinks, a more outlandish design and a larger customisable display. The Gigabyte Z390 Aorus Xtreme is a pure gaming board with larger, more gregarious heatsinks and a greater number of RGB LEDs throughout.

Nevertheless, the Asus isn’t a bad-looking board, and it benefits from a solid set of features.

The four DIMM slots support 64GB of DDR4 at a rapid 4400MHz. That’s half the capacity that both rivals can handle, but it’s still ample – and Asus has started releasing BIOS updates for other boards that upgrade their capacity to 128GB, so the Maximus XI Extreme will probably be updated too.

The Asus has plenty of storage options. The board has two M.2 connectors, and it also has a fifth DIMM slot that can be used with an expansion card that adds a further two connectors. Impressively, all four M.2 slots have their own heatsinks, and Asus also includes the standard six SATA 3 connectors.

The MSI and Gigabyte boards have three M.2 connectors on board, and the MSI wins for storage: it also included an expansion card with two more M.2 plugs, and it also had a U.2 connector.

This board has three PCI-E x16 slots, with two capable of running at 8x speed – so you get enough bandwidth for AMD and Nvidia dual graphics. There’s a third PCI-E x16 slot that runs at a slower 4x speed, and just one PCI-E x1 socket. 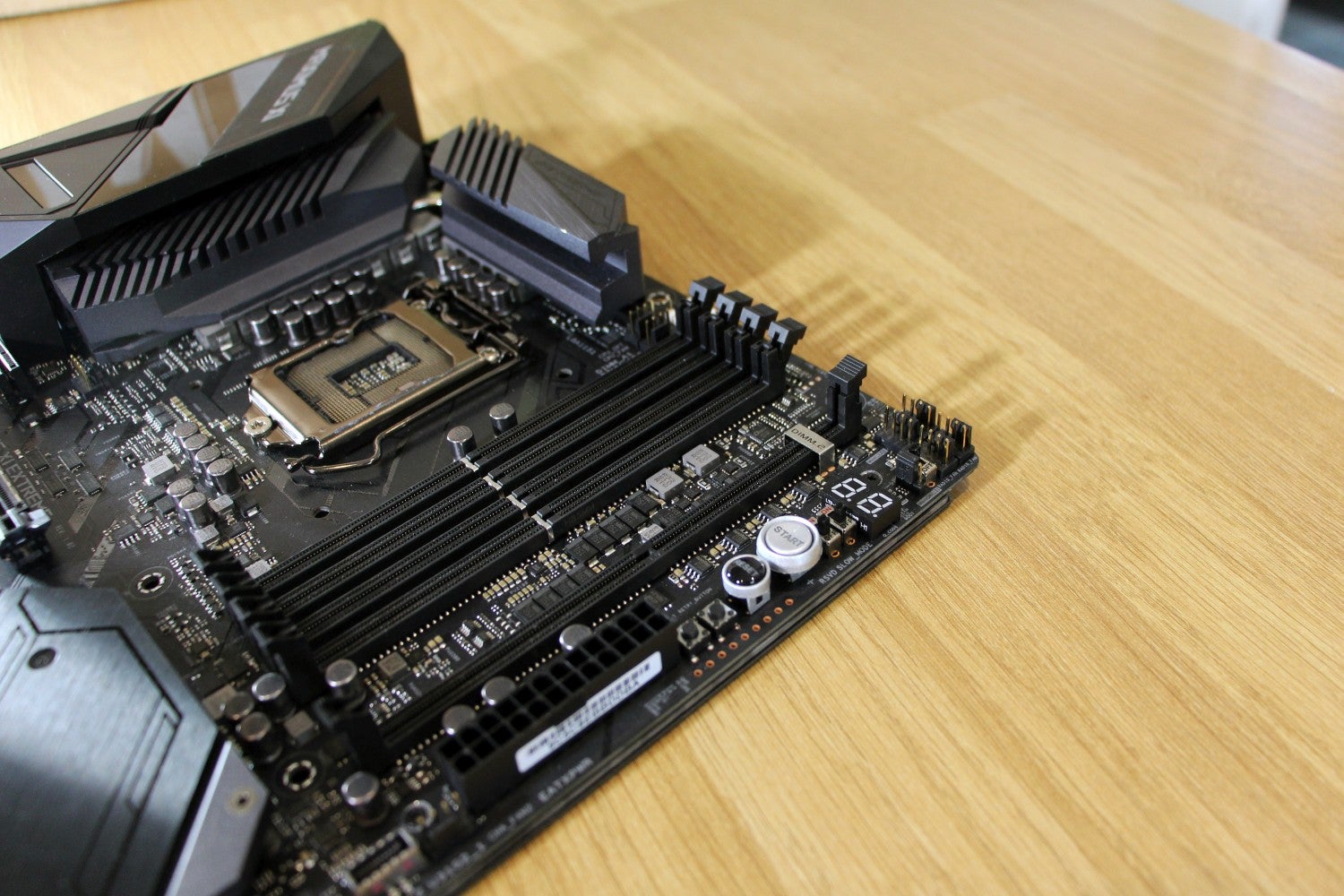 The MSI board has four PCI-E x16 slots, but the two latter slots still run at slower speeds, so they’re only suitable for expansion cards. The Gigabyte does at least have two PCI-E x1 sockets.

You’re well catered for if you want to add more fans and lights. This board has four headers for lighting strips and two headers for water-cooling pumps alongside dedicated plugs for water flow management. In addition, you get a mighty 12 fan connectors divided between radiators, the CPU and conventional system fans.

The MSI does come close here, with 10 fan connectors – and the Gigabyte has eight – but the Asus is the clear winner.

There are still more features amid all of those fan connectors. At the bottom you get a BIOS Switch button and a connector for the Asus EZ Plug, which can be used to deliver greater power to the PCI slots.

The right-hand side has power and reset buttons alongside a traditional POST display. You also get Safe Boot and Retry buttons, which are handy for tweaking. There’s a slow mode switch and four conventional diagnosis LEDs. You also get the Asus Probelt, which is a row of points that measures voltage and overclocking settings with a multimeter. Three connectors for thermal sensors are included at the bottom of the board.

These are all welcome inclusions for extreme overclockers and people who want to add lots of water-cooling, but so much hardware means that the Asus is extremely cramped – and it still feels tight, even though it uses the larger E-ATX form factor. Both rivals use E-ATX, too, and it means you’ll need to make sure your chassis can accommodate a larger board.

The MSI also has power and reset buttons alongside switches to retry settings to boot into the BIOS and switch between BIOS files. It also has a simple dial to automatically apply CPU overclocks alongside a POST display. However, the MSI doesn’t have as many high-end tweaking features as the Asus. 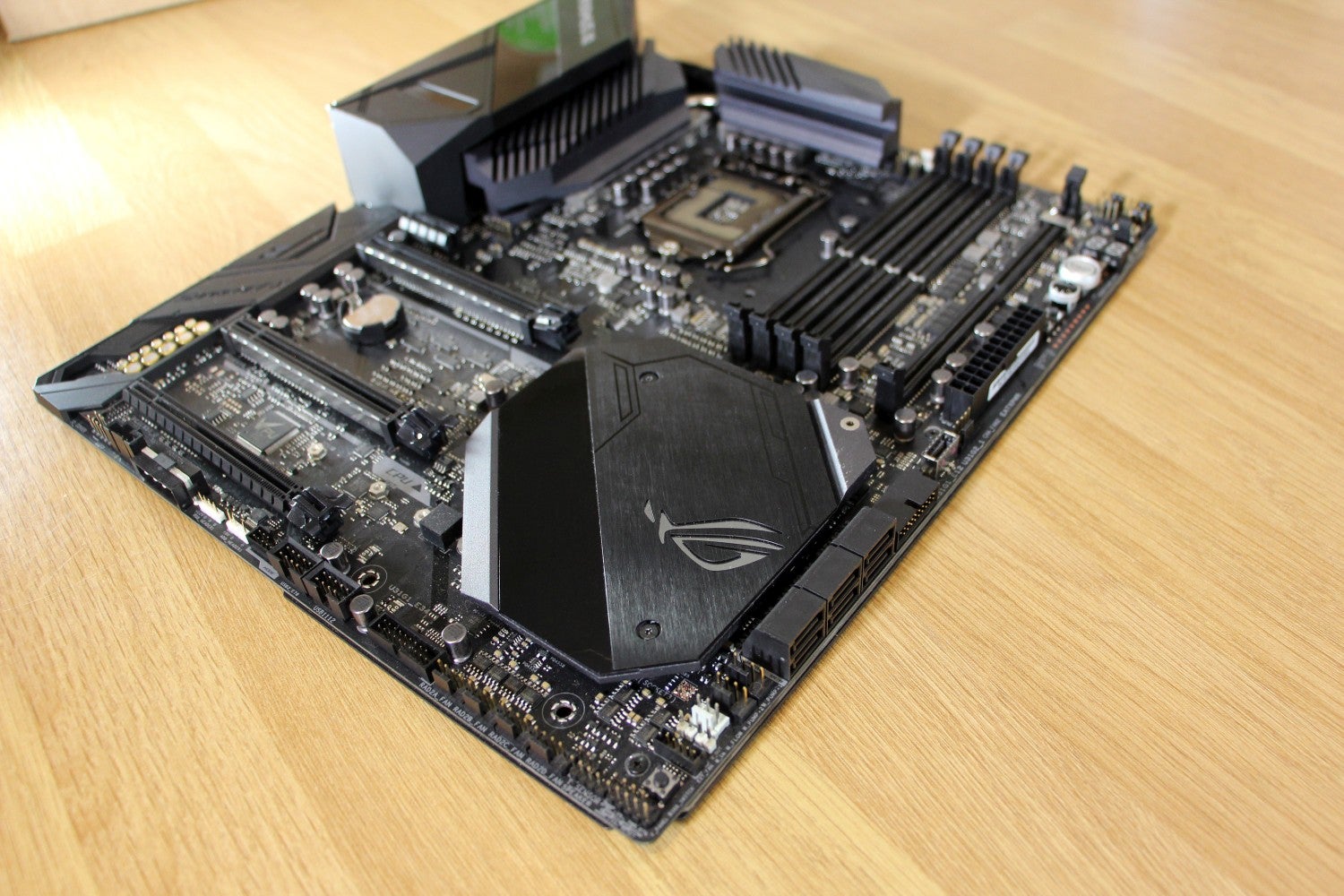 The Gigabyte Z390 Aorus Xtreme does just pull in front of the Asus when it comes to enthusiast features. It features most of the same on-board buttons and switches, and you get the Gigabyte OC Touch – a circuit board with far more buttons and voltage read headers. For enthusiasts it’s a far more usable solution, although that board is more expensive than the Asus.

The Asus has impressive USB connectivity. On the board you get two USB 3.1 Gen 1 connectors, a single USB 3.1 Gen 2 front-panel Type-C connector and two USB 2.0 connectors.

The MSI has more on-board USB 3.1 connectors, two Type-C plugs and similar USB connectivity at the back panel. The Gigabyte had fewer on-board connectors but one more Gen 2 socket at the rear IO.

The rest of the rear I/O is good. You get an optical S/PDIF port and five audio jacks, and both Clear CMOS and BIOS Flashback buttons. There’s a Gigabit Ethernet socket and a second Ethernet port that supports Aquantia AQC1115C 5Gbps networking – alongside the two wireless aerial connectors that facilitate the dual-band 802.11ac connection.

The MSI board, which is designed for work and creativity, has a 6.5mm headphone jack, but the Gigabyte takes a comprehensive victory here by including Thunderbolt and 10Gbps Ethernet.

Audio comes from a SupremeFX S1220 eight-channel chipset with an ESS ES9023 24-bit DAC. It’s great hardware that will easily sate almost everyone. However, both rivals include marginally better 32-bit DACs. 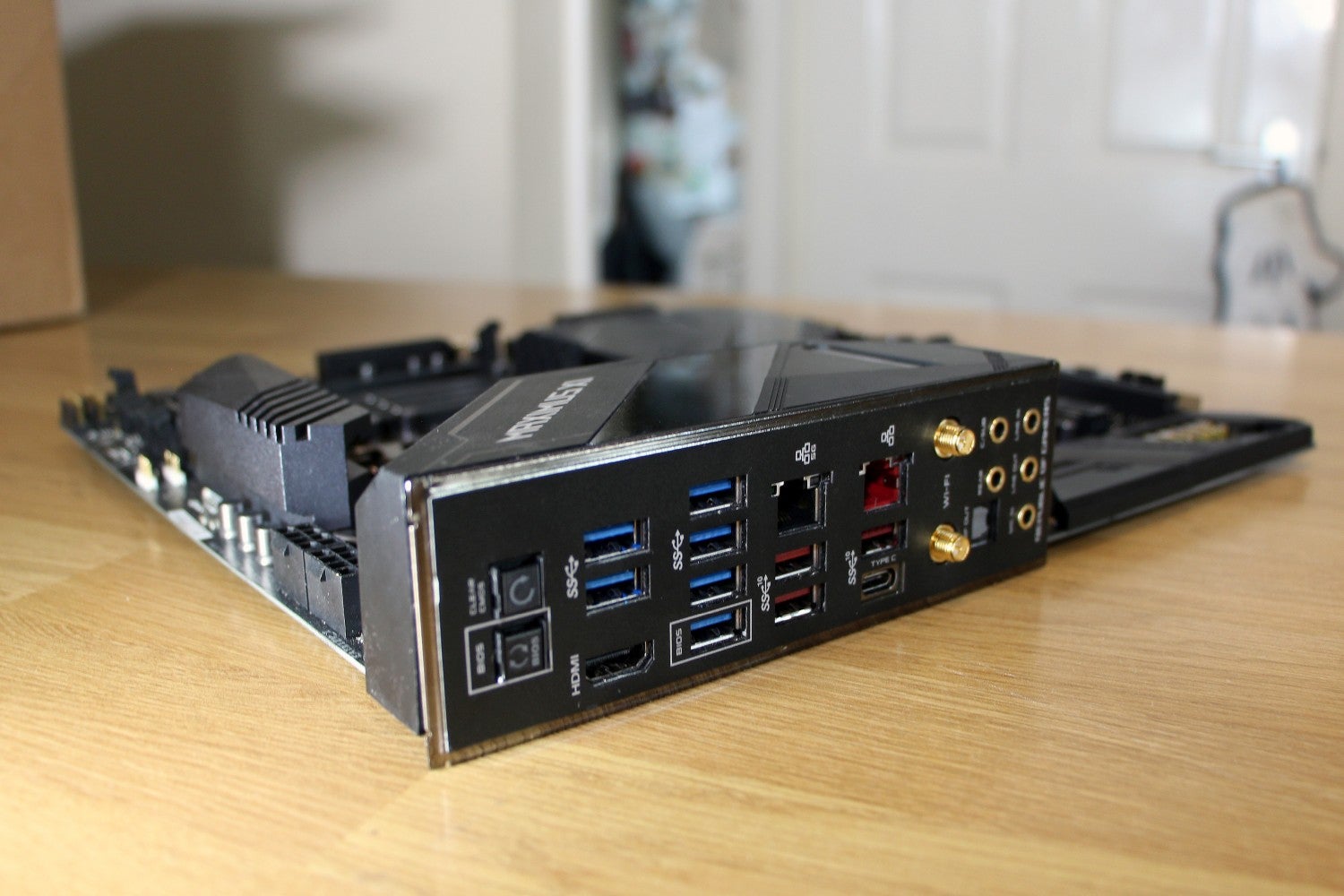 At the top of the board are two 8-pin power connectors – handy for pumping extra electricity to the CPU. Both rivals have this configuration, too. However, while the Asus has a 12-phase design, the MSI and Gigabyte are both 16-phase boards.

While the Asus will still be an excellent overclocker, you’ll likely be able to pump a little more power through your CPU on those rival boards. Only the most extreme users will notice the difference – those folk who tweak their chips with liquid nitrogen – but it’s a distinction worth mentioning.

In the box you’ll find wireless aerials, lots of cables and a small extension card with three extra fan headers and three more thermal sensor connectors. There’s also an Nvidia SLI High-Bandwidth bridge. The key extra is the ROG DIMM.2, which adds two extra M.2 connectors to the board.

As I’ve seen, the Asus trades blows with its more expensive rivals when it comes to features. In some areas it’s better equipped, but in other departments it can’t quite compete. When it comes to performance, though, this board constantly punches above its weight.

Its Cinebench multi-core result of 1549cb is a few points ahead of both boards, and its Geekbench score of 29,831 is also faster. It was also a little speedier in the SiSoft Sandra processor arithmetic test, which indicates that the Asus will be able to handle tough workloads.

Its single-core Geekbench score of 6071 falls behind the work-focused MSI, but the gap is small. 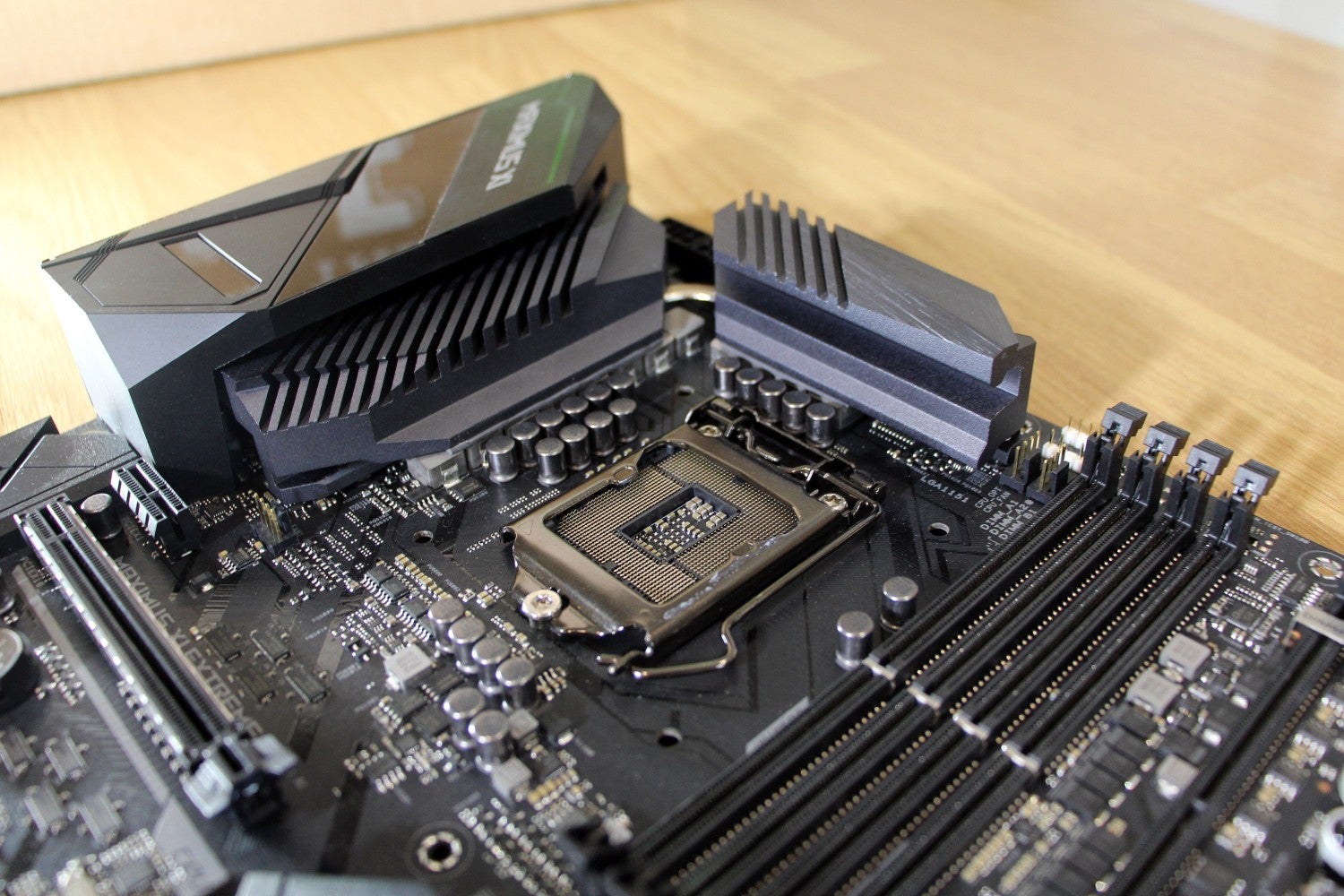 The Asus performed well in gaming benchmarks. Its 146fps average in Middle-earth: Shadow of Mordor and its 102fps in Shadow of the Tomb Raider are both good, and both a couple of frames ahead of the MSI and Gigabyte boards.

The Asus’ Fire Strike result of 17,808 is ahead of the Gigabyte but behind the MSI. In the trickier, more future-proofed Time Spy test the Asus scored 7743, which is a little ahead of both rivals. This is notable, because more games will use Time Spy’s technologies going forward.

The only inconsistencies were in the storage and memory tests. The Asus was better than both rivals when it comes to memory and SATA speed, but it fell behind in the NVMe storage benchmarks.

It isn’t a particularly frugal board, either. The Asus’ peak power draw of 142W is a long way behind either of its competitors.

Nevertheless, the Asus is a well-balanced board, with performance that outstrips rivals in virtually every scenario – particularly in more demanding tests.

The Asus ROG Maximus XI Extreme isn’t for everyone, especially at this price, but it’s an excellent board that squares up to more expensive rivals.

Its storage, PCI and memory options are largely comparable, and it has more fan connectivity, solid USB options and plenty of on-board buttons. Certainly enough for overclocking enthusiasts and people who are going to use a lot of water-cooling. It’s faster than rivals in most scenarios, too.

It’s only worth looking towards the MSI or Gigabyte in specific scenarios. Both have slightly better audio and more on-board RGB LED features. The MSI is marginally better for storage and USB connectivity, while the Gigabyte is better for fast networking and high-end tweaking.

However, the Asus undercuts both at the checkout, and it delivers fantastic performance and superb features. Unless you need some of the particular additions on the MSI or Gigabyte boards, I’d recommend saving some cash and buying the Asus ROG Maximus XI Extreme instead.

The Asus offers excellent storage, PCI and memory features alongside top-notch fan and USB connectivity. It has sufficient on-board options for most enthusiasts, and its performance is consistently excellent. Pricier rivals are better in a few minor areas, but the Asus will satiate the vast majority of people who are looking for motherboards at this level of the market.