While not a leader in any field, the Asus ROG Maximus XI Hero is an effective and well-balanced option for all sorts of systems.

What is the Asus ROG Maximus XI Hero (Wi-Fi)?

The Asus ROG Maximus XI Hero is one of two boards in this Z390 group that fall right into the mid-range of the modern Intel motherboard market – and this board is £15 more expensive than the ASRock Z390 Phantom Gaming 9.

The Hero’s core specification is well set up for single and dual-GPU PCs with some CPU overclocking.

It’s got three PCI-E x16 slots, and the top two have steel supports and can run at 8x speed – so, along with both AMD and Nvidia dual-graphics capability, you could easily slot two GPUs into this motherboard. The third slot is locked to 4x, so it’s fine for other expansion cards.

That PCI-E x16 configuration matches the cheaper ASRock board, although the Asus product does have three PCI-E x1 slots – one more than the Phantom Gaming 9.

The Asus pairs its solid PCI allocation with better aesthetic design than the ASRock. The Asus board has dark, brushed metal heatsinks on its north and south bridges alongside a chunky rear IO cover, and the board itself is entirely black. It’s certainly sleeker and more mature than the lighter metal and red and white streaks on the ASRock – and the Asus has more extensive rear IO covering, too. 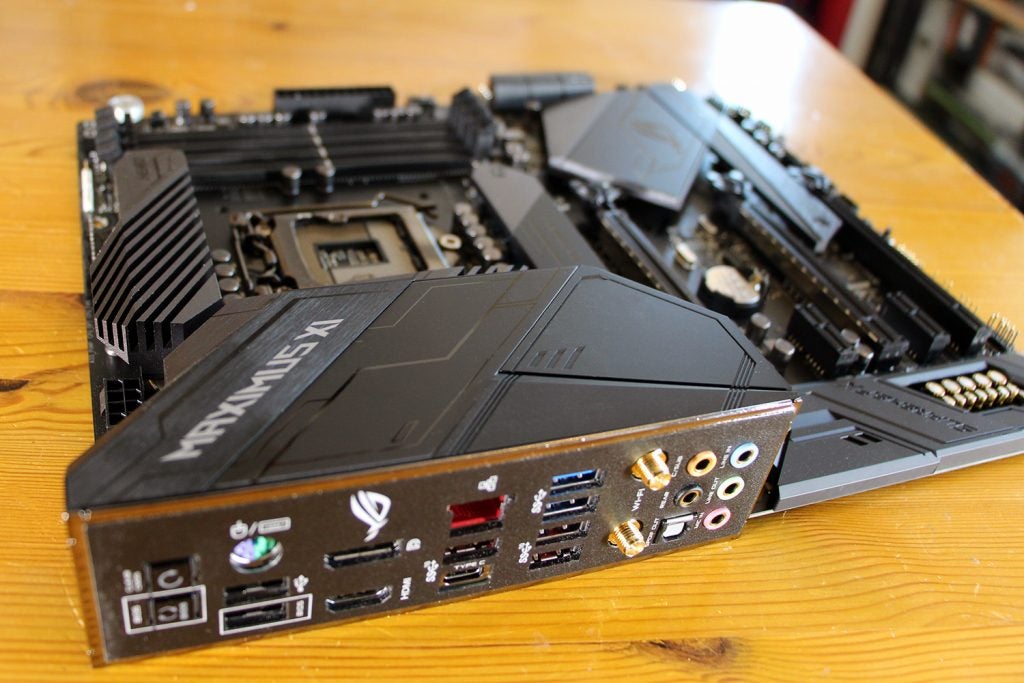 The Maximus board has RGB LEDs in its rear IO and southbridge heatsinks – just like the ASRock. Asus pairs its RGB LEDs with four RGB headers across the board, and those all work with Asus Aura Sync – so they can be synchronised with other ROG hardware.

The Asus board supports the standard 64GB of DDR4 memory, and it has six SATA ports and two M.2 sockets. One of the M.2 sockets can use both SATA and PCI bandwidth, while the other just relies on PCI speed. Both have heatsinks.

Only one of the ASRock’s M.2 connectors had a heatsink, but that board offered three M.2 connectors and eight SATA ports. For storage, then, ASRock is the clear winner.

The Asus falls behind in networking, too. Its dual-band 802.11ac wireless, Bluetooth 5.0 and dual Gigabit Ethernet is certainly not bad, but the ASRock had a 2.5Gbps Realtek Dragon Ethernet port.

Both boards have Realtek ALC1220 audio bolstered by extra hardware – the ROG board has SupremeFX while ASRock has Sound Blaster. Both will do a good job with games and movies. 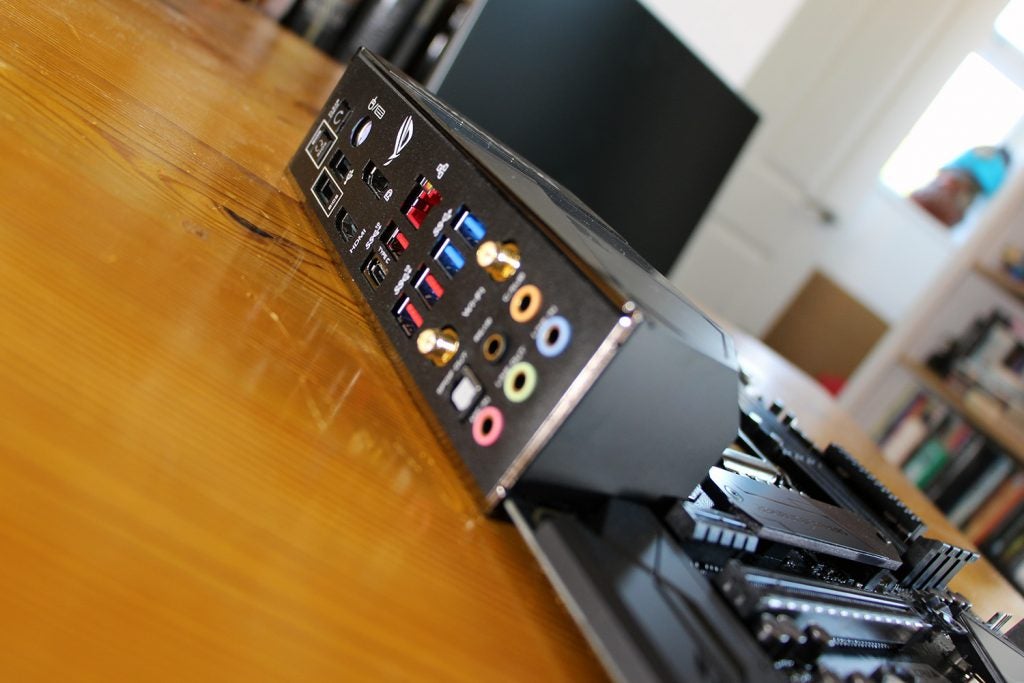 The Asus has a mighty eight fan connectors, an extra four-pin CPU power connector, start and reset buttons and a POST display – all features that the ASRock also includes.

When it comes to connectivity, though, the ASRock is a little better. On-board, both models have USB 3.1 Gen 2 Type-C front panel connectors, but the Asus only has one on-board USB 3.1 Gen 1 connector – while ASRock’s board has two.

At the back panel, the Asus board has Clear CMOS and BIOS Flashback buttons alongside three USB 3.1 Gen 2 ports and a Type-C output. Its rear IO is completed by two USB 2 ports and five audio jacks.

That’s fine, but the ASRock has seven USB 3.1 ports, one Type-C connection – and no slower USB 2.

In some areas, then, the Asus’ specification does look a little mean when compared to the ASRock. That can be explained somewhat by a closer look at the prices: the board I’ve reviewed here is the Asus Maximus XI Hero Wi-Fi, which costs £286 and is pricier than the £271 ASRock. If you’re willing to ditch wireless internet, though, you can opt for the standard Hero board – which costs £258. 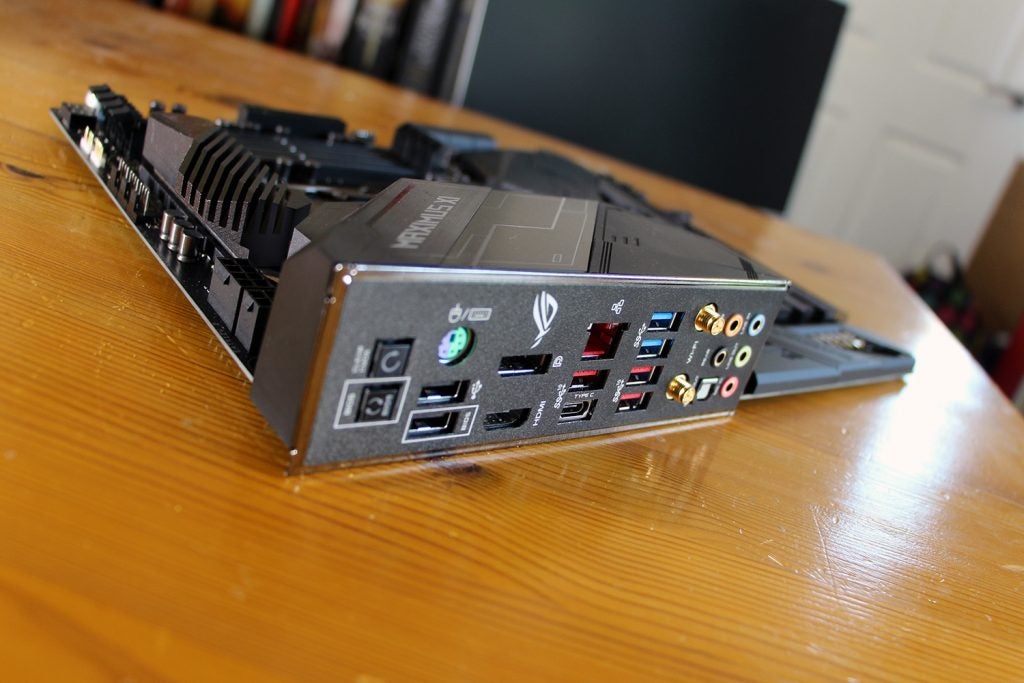 Its Cinebench results of 211cb and 1,503cb are mid-table in the wider group but easily beat the ASRock, which proved disappointing in that test. Similarly, the Asus performed well in Geekbench – while the ASRock languished.

The Asus was one of the most consistent boards that we’ve tested. Its idle power draw of 56W was the joint-lowest in the Z390 group, and its SATA and NVMe benchmark speeds were good – consistently among the fastest in the entire test.

It performed well in gaming. Its 3D Mark Fire Strike score of 17,667 is solid, and it topped our benchmark tables with a result of 7,679 in Time Spy.

It was one of the fastest boards in Shadow of the Tomb Raider, too, and was among the quickest in Middle Earth: Shadow of Mordor.

The ASRock board was entirely average in all of the gaming benchmarks, and its NVMe results were poor.

Drilling down further into the Asus’ results indicates that this board isn’t quite as quick when it comes to complex, CPU-heavy tasks – like the Cinebench and Geekbench multi-threaded tests, or the Sandra processor arithmetic test.

That indicates that this board isn’t the best option for complex work. For day-to-day computing and for high-end gaming, though, It’s very good – and easily better than the ASRock. 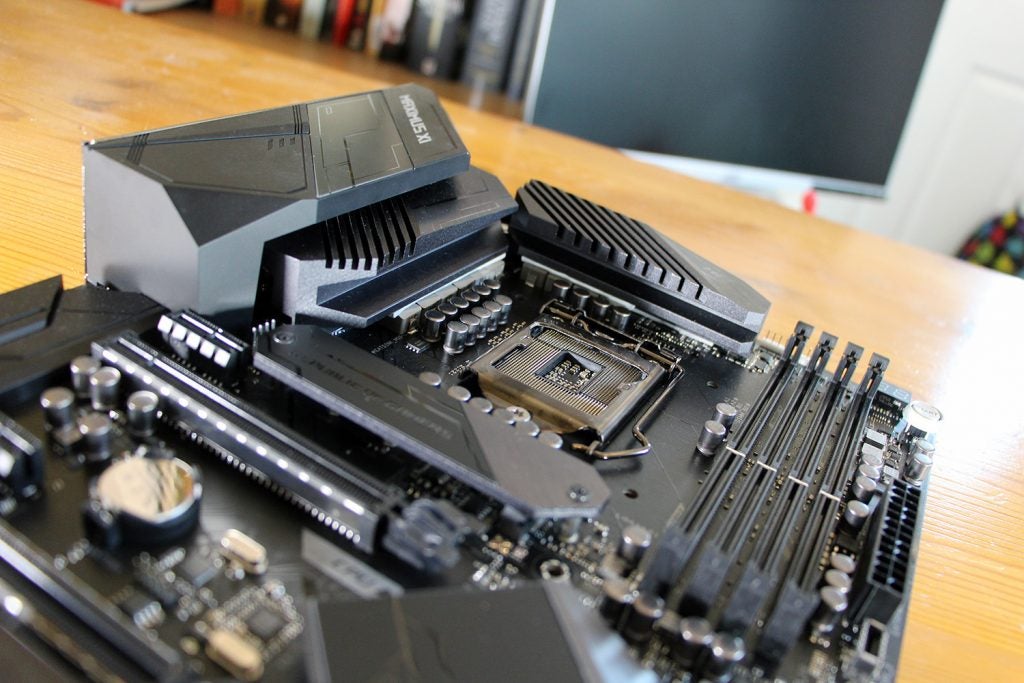 Should I Buy the Asus ROG Maximus XI Hero (Wi-Fi)?

It’s consistently quicker than the ASRock product in both applications and games – so it’s an easy winner if you want a motherboard that has top-tier performance.

However, while the Asus has a good set of features, the ASRock is a little better when it comes to storage, networking and ports. If you need these features, that board is worth the performance hit.

The Asus’ specification should sate the vast majority of builders, though, and it’ll be consistently quicker. And, as an added bonus, it’s possible to save a solid chunk of cash if you’re willing to eschew wireless Internet.

The Asus can’t quite compete with its main rival from ASRock when it comes to on-board features and connectivity, but it still has a good enough specification for the vast majority of builds. It’s possible to save money by ditching wireless, too, and it’s consistently quicker than the ASRock in benchmarks. It’s an effective and well-balanced option for all sorts of systems.