Currently, there are only six of these machines in the UK – five are on sale and one is being shipped around reviewers. This is probably the most exclusive laptop you’ll find from a major manufacturer, and likely the most powerful, too. And the heaviest. And the most liquid-cooled.

Asus doesn’t have an automated production line for the GX700. It’s assembled entirely by hand, which rather adds to its appeal. Don’t expect a personalised note on delivery, though, nor a fancy certificate in the box.

Video: Trusted Reviews gets hands-on with the GX700 for the first time 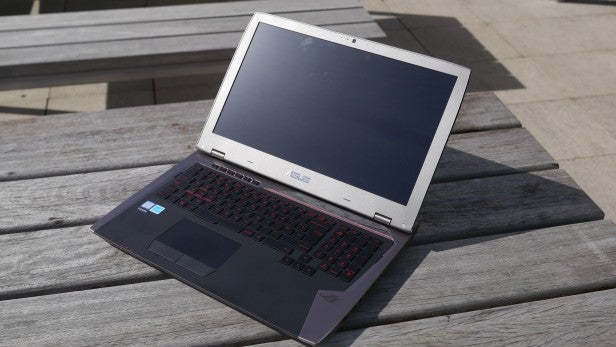 Here, the external dock does something we’ve never seen on any other laptop. Connect it to the laptop and it will pump liquid coolant around the innards of the laptop, replacing its fans with a reservoir, pipes and quiet radiator fans in the secondary dock. As a result, the CPU, GPU, RAM and video RAM can all be overclocked well beyond stock speeds.

I had expected this to be an impossible device to review. When you consider this laptop costs around as much as a 10-year-old, mid-spec Mercedes C-Class, and that there are only five on sale in the whole of the UK, a review seems like a moot point.

Those who want a slice of what will eventually be PC gaming history will snap it up, and the rest of us will ogle and poke fun at it. I’d dole out a four-star rating and that would be that.

And yet, here we are. Yes, the Asus ROG GX700 receives four stars, but this isn’t a laptop you should simply dismiss as “gamer tat”. This is a serious machine offering serious performance.

Asus has gone all-out with the design of the ROG GX700, and I’d expect nothing less. The main laptop unit is made from brushed metal and a copper-effect plastic, with some sharp angles and a crease on the lid for two strips of orange lights that pulse up and down.

Open it up and you’re presented with a full-sized keyboard that includes a number pad. The keys have red labels and red backlighting, and there’s a strip of Mayan-inspired patterned plastic that harks back to the impressive – but super-expensive – ROG G20CB reviewed earlier this year. 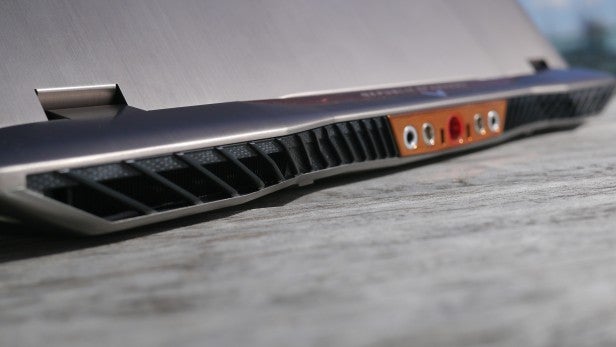 Five programmable macro keys sit above the keyboard, and there’s a dedicated button to start and stop game-streaming software, XSplit, to which Asus provides a lifetime licence.

This machine is heavy. The base laptop weighs nearly 4kg, making it a real pain to lug around even if it’s only being moved within the home. However, when you consider what you’re getting inside this machine, it really is more a desktop replacement than it is a laptop.

The GX700’s generous proportions allow for desktop-level of connectivity around the sides of the machine. They include three conventional USB 3.0 ports, a USB 3.1 Type-C connector (offering USB 3.0 speeds) and a separate Thunderbolt port. There’s a mini-DisplayPort connector for external monitors, and a full-size HDMI 1.4 port, too. Gigabit Ethernet, 802.11ac Wi-Fi and Bluetooth complete the lineup of networking kit. A Blu-ray reader is also provided for disc-based entertainment. 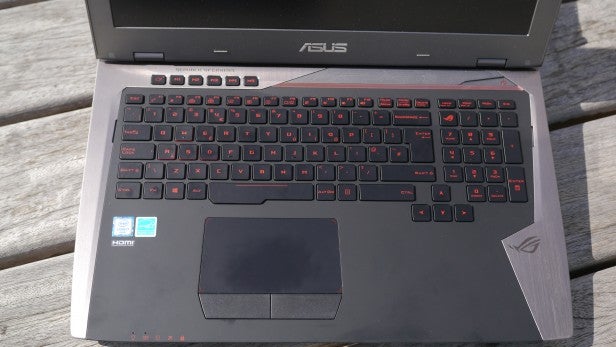 At the rear, there’s the power connector and four extra connectors for the liquid-cooling dock. The dock itself looks fantastic, featuring a black grille and colour highlights. One member of the TrustedReviews team described the whole setup as what “a Transformer whose base form is a laptop” would look like. I can’t help but agree.

To connect the laptop to the dock, you simply line up the two arrows – one on the laptop and one on the dock – and let the laptop drop onto four metal prongs. Then, pull the large metal lever that sits in the middle of the liquid-cooling dock; this slots the cooler’s power connector and intake and outlet pipes into the rear of the laptop. It’s all satisfyingly manual and mechanical and makes docking in a real event.

The dock is powered by a larger, 330W power supply that comes in the box; this supply will also power the laptop. The standard, smaller Asus-branded power supply won’t be needed unless you take the laptop away from the dock and want to plug it in.

You’ll know it’s all working correctly when you hear a two-second beep coming from the dock when you switch on the laptop. Congratulations, you’ve successfully set up the world’s first water-cooled laptop. 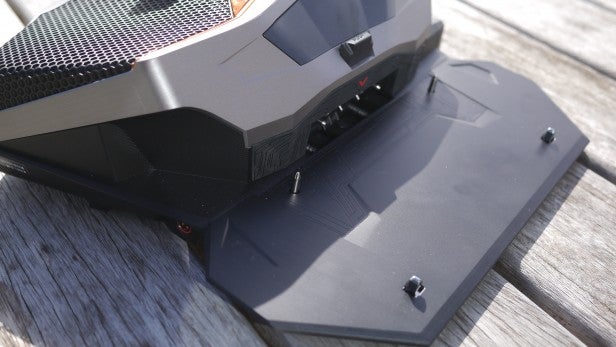 To detach, press the “push” button on the front of the dock to disconnect the power supply and fluid pipes. Make sure you do this when the laptop is switched off.

Some readers have expressed concern that such a mechanism is a recipe for a coolant leak, but in my time with the laptop – and with dozens of undocks and re-docks – I had no issues whatsoever with the cooling system.

The keyboard isn’t quite what I’d hoped for. The base exhibits rather too much flex, and while the keys have enough travel, they’re found slightly lacking when compared to those on other gaming laptops, such as devices from MSI.

At least the entire keyboard is backlit. This is with red LEDs, however, which leads to every typing and gaming session being backed by a rather aggressive glow. It’s a full-sized keyboard, though, and includes a number pad.

The touchpad is fine, and while I don’t expect it to get much use – nor the optical mouse, for that matter – it’s nice that Asus has included buttons with plenty of tactile feedback and a reasonably gesture-sensitive touchpad surface, too.

Living with the Asus ROG GX700

Asus gave me three weeks with the ROG GX700, which inevitably meant that I’d have to take it home for the weekend so I could spend some quality time with it in the comfort of my one-bedroom flat.

We don’t normally write about packaging, but the wheelie case included with the GX700 is worth a mention, simply because it’s one of those rare pieces of tech packaging that’s designed to be reusable.

Soft foam, red Velcro-fastened straps and moulds for all the cables and accessories meant I was never worried about damaging the GX700 in transit, more just losing it. There’s a four-digit code lock on the case, which is handy for preventing opportunistic thefts at LAN parties, too. 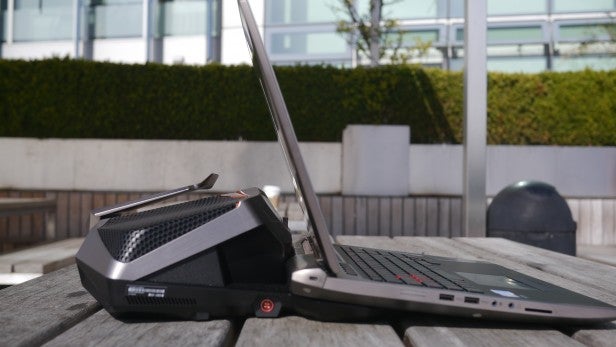 The laptop and dock together weigh 8.4kg, which makes dragging the case around rather tricky, especially on uneven London streets. Taking it on the Tube was something my colleagues strongly advised against, but being too cheap to hire a cab I went ahead anyway. The best advice I can give is to allow lots of extra time for any journey you make with the ROG GX700.

The commute isn’t ideal, then, but it’s worth remembering that the main laptop unit works perfectly well without its water-cooling dock. So, transported in a large bag, the GX700 would make a powerful companion on your journey to and from work – and then, once you’re home, you could turn up the overclocking and have an even more powerful machine for gaming at home.

If you already have a desktop at home, you should consider whether you actually have room for the full GX700 and its dock.

My desk is occupied already by a gaming PC, so I had to relegate the GX700 to the dining table. This proved a problem at mealtimes, when the laptop had to be undocked and the whole shebang moved to another room in order to eat like a civil human being.

Granted, I doubt those who can afford this laptop will share the space issues suffered by a lowly tech writer, but it’s worth considering if the GX700 isn’t your main machine.

I was a little underwhelmed by the GX700’s screen. It didn’t jump out as I’d have expected a panel on a high-end laptop to, with contrast and viewing angles in particular nothing to shout about.

This is a shame – although, in all likelihood, this laptop will spend much of its time hooked up to an external monitor. Still, second to performance, a laptop at this price should include a fantastic screen, and this one simply isn’t. At just Full HD resolution, too, it’s a little disappointing that you can’t push the GPU to its limits with 1440p or 4K gaming.

Contrast was underwhleming: 0.35-nit black levels are pretty high and meant that atmospheric – and very dark – games such as Shadow of Mordor needed their in-game brightness jacked up just a little. Maximum brightness was pretty high at 365 nits, which lead to an overall contrast figure of 1,059:1. Normally, this would be a decent result, but on a laptop of this price I’d have wanted more.

An overall Delta E figure of 3.65 is pretty decent – where a lower number means more accurate colours – with most colours well served, if a little darker than I’d like. Reasonable marks for the screen, then, but it’s far from outstanding.