The GX700 is a phenomenal performer. I’ve never seen such a powerful laptop, and I doubt I will again for quite some time. At full speed, nothing can touch it in the benchmarking stakes.

The Intel Core i7-6820HK has a base clock speed of 2.7GHz and can Turbo Boost to 3.6GHz when thermal conditions allow. However, there’s far more to this processor than its factory defaults. The “K” suffix denotes it has an unlocked voltage multiplier, meaning overclocking is possible. More on that later. 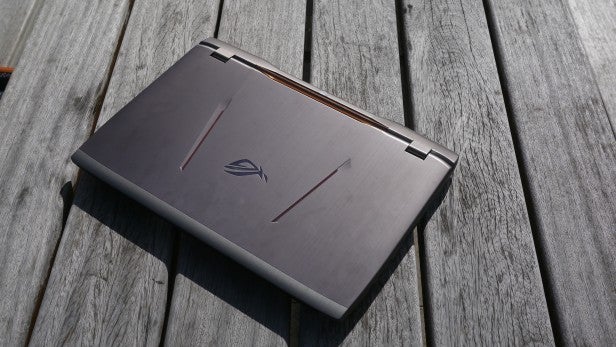 Also on board is the full desktop-specification Nvidia GeForce GTX 980 graphics card: you won’t see anything more powerful in a laptop form factor – at least not in this generation of laptops. Asus has loaded this GPU with a staggering 8GB of GDDR5 memory, making it – on paper at least – a very similar specification to the desktop chip. As you’ll see from the benchmarking results, you can go beyond even desktop-level performance with only a couple of clicks.

Without any modifications, the GPU is capable of playing the latest games at Full HD resolution at maximum settings and can even stretch to 1440p, although when you start throwing 4K resolution gaming at it, you’ll need to dial back the settings. For the laptop’s built-in Full HD screen, though, it’s perfectly capable.

Also on board is 32GB of DDR4 RAM, which should be more than ample for most. With that said, there are two free memory slots so you can double-up to 64GB if need be. Two PCI Express-based SSDs work in tandem in RAID0 to provide 256GB storage at extreme speeds; I recorded a sequential read speed of 2,336MB/sec and 2,136MB/sec write in the AS SSD benchmark. This high-speed, low-capacity storage is backed up by a conventional 2TB mechanical hard disk.

The laptop operates in four separate performance modes, which can be switched via the preinstalled ROG software. They’re not brilliantly named or well explained, but they work as follows:

In TrustedReview’s suite of benchmarks, there are notable performance increases in each mode, as you’d expect. The table below shows more in-depth information, but I’ll summarise the performance gains here.

Standard mode is, as you’d expect, underwhelming. With that said, there was very little difference in gaming performance between the Standard and Optimised modes, with the GPU running at normal speed in both. Processing performance is 10% slower than in Optimised due to the lower maximum clock speed. In this mode, I achieved around 150 minutes of battery life sitting on the Windows desktop. You won’t get much gaming joy in this mode. 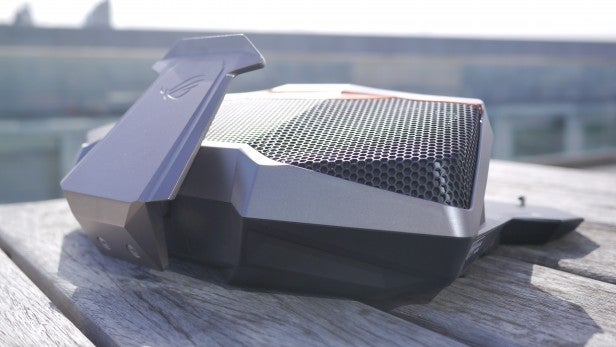 Optimised sees an improvement, with the processor now operating at normal speeds. In terms of graphics benchmarks, it behaves in roughly the same way as a desktop, unmodified Nvidia GeForce GTX 980 graphics card.

In Extreme mode, things kick up a notch. Processing performance is 10% better still and graphics performance is between 20 and 20% better in both the synthetic 3DMark: Fire Strike benchmark and our Dirt Rally and Shadow of Mordor benchmarks, which are run in Ultra settings at Full HD resolutions.

With a custom overclock applied from within the ROG software, I was able to bring performance up marginally by allowing the processor to run at 4.4GHz, although without overshooting Asus’ safeguards, I wasn’t able to boost performance by a huge degree. Our CPU benchmarks showed modest improvements, which means the processor was unable to sustain these clock speeds for long periods.

The problem with undertaking a “Custom” overclock is that the laptop has to be restarted for the changes to take effect. This is because the changes are made at a BIOS level before Windows 10 boots. This also means that if you’re running a Custom overclock, you’ll have to shut the system down and then power it up again without the dock attached. You’ll then have to restart the laptop once you’ve logged in, in order to get back to a safe setting for the laptop in its undocked mode.

Aside from increased power consumption, there are no downsides to running the laptop in Extreme mode whenever it’s docked. Running CPU torture tests and games simultaneously, processor temperature never rose above 57oC, which is well within safe limits. Under load, the fans of the cooling dock never exceeded more than quiet whooshing.

This is where the ROG GX700 really comes into its own: you won’t find a similarly powerful laptop that’s anywhere near as quiet as this machine. Even undocked, using standard cooling fans, the laptop wasn’t hugely loud and the whirr of the fans was relatively inoffensive.

To avoid any faff, I’d personally have the ROG GX700 running in Extreme mode, since it doesn’t require any tweaking of the BIOS in order to run. In addition, it makes the laptop rather more flexible if you want to pick it up and move it around the house. 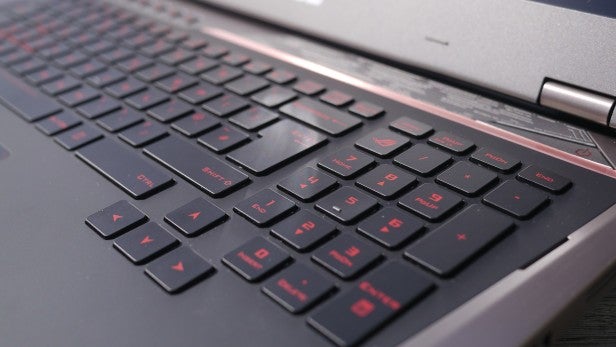 Up against the ROG GX700 is the MSI GT72S Dragon Edition, which comes with the same processor and graphics card and can be bought for between £800 and £1,000 less than the Asus, depending on specification. Graphics performance with the GPU overclocked in the most practical Extreme mode, the Asus performed around 10% better, or 20% better with a custom overclock.

The MSI Dragon can be overclocked, too, but due to the fact that it wasn’t running final software when we reviewed it, we can’t reveal the GTX 980’s benchmark figures when overclocked.

Docked, the Asus is significantly faster than the MSI Dragon without an overclock applied, faster in the Geekbench single- and multi-core tests.

If you want the most powerful laptop that a lot of money can buy, then you should absolutely buy the ROG GX700. Or you could pay £1,000 less and get a laptop that’s nearly as powerful in the form of the MSI Dragon and you’ll barely notice the difference. But price/performance sums aren’t really relevant when the product in question is a unique piece of gaming hardware.

There are also laptops with external docks to consider. While they’re fairly poor value to begin, they come into their own when it’s time to upgrade. The ROG GX700 has no upgrade potential when it comes to its GPU, while a device such as the Gaming Dock from MSI enables you to fit most full-sized desktop graphics cards without having to replace your entire rig.

For the money, I’d have expected ever-so-slightly better build quality and a superior, higher-resolution screen. Then again, I’d never have expected the ROG GX700 to come with its own wheelie case…

It’s ridiculous. It’s a monster. You probably won’t buy an Asus ROG GX700, but you should absolutely want to.